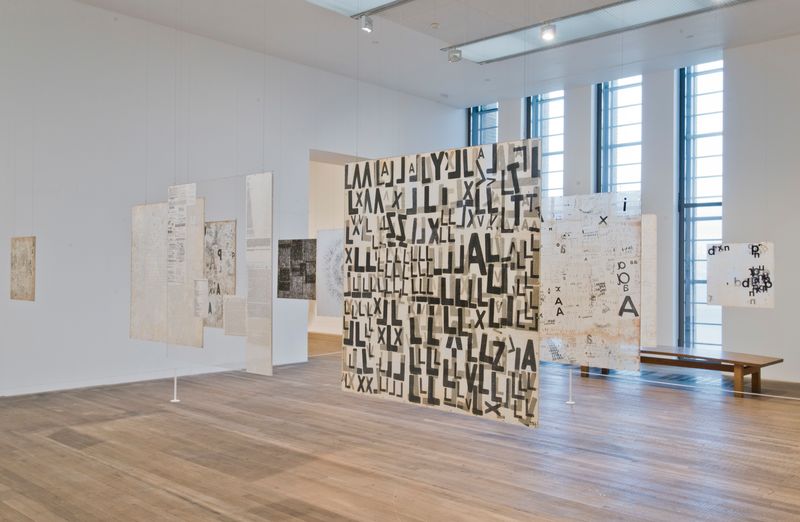 But what if an artist takes a different approach, considering the possibility that the art-language-nexus exceeds questions of system and structure, instead opening strands into the realm of phenomena, and plastic phenoma at that? In Mira Schendel’s work, Melanie Gilligan recognizes just such an endeavor that leads from language and letter to logos in a different sense, namely how things come to be seen in the world.
The work of Mira Schendel presents a singular reflection on linguistic representation in its signifying and non-signifying forms. Schendel’s practice, influenced by postwar materialist abstraction, can be seen as connected to various movements from the middle of the twentieth century, principally Concretism, and the Neo-Concrete movement in Brazil, Concrete poetry, and Lettrism. Yet it is notable how the artist’s drawings, paintings, and installations indicate a specific set of references and problems pursued for aims that are aesthetic as well as philosophical. What is most impactful in her practice is precisely its nonconformity to a coherent concept either of art or of philosophy. Instead, what is conveyed is Schendel’s commitment to the amalgamation of the two disciplines, a fact that sets her apart from other artists and may have contributed to a relatively isolated artistic career.
Until recently Schendel’s art had rarely been shown outside of Latin America. In Brazil, the country where she spent the majority of her life, her highly regarded work is a significant influence on many younger artists, yet in her own city of São Paulo the majority of her works are in private rather than public collections. In the past few years, exhibitions in North America and Europe such as ‘Tangled Alphabets’ at the Museum of Modern Art in New York and now the current retrospective at the Tate Modern have acted to remedy this situation. The recent Tate retrospective was a chronological and highly compressed presentation in which individual works or elements from series sometimes sat in close proximity, bringing to the fore lines of thought that skip across and through various pieces. One striking fact that registered early on is that while until the end of the 1950s Schendel’s works primarily employed a language of formal abstraction, in the 1960s, arguably the artist’s most prolific period, Schendel’s methods broke into different parallel strands from year to year. Abstract paintings, figurative watercolor and collage works, as well as stenciled text paintings were produced in short succession. This period also signals the beginning of her shift into language-focused compositions. Her abstract paintings made at this time are characterized by a muted color palette and the division of pictorial space into often symmetrical geometrical sections asymmetrically weighted by differing distribution of dark and light.

Shortly after this point, text arrived in Schendel’s work alongside instances of quasi-Pop juxtaposition. In ‘The Return of Achilles’ (1964), one of two Homer-inspired works on this theme, the painting stages a fragment of a statement ‘Now That I Am Back’ in capital letters diagonally across the canvas, which refers to Achilles’s return to battle to avenge his cousin Patroclus and thus signaling the beginning of one of the epic’s most violent passages. The half-sentence hangs midair within the canvas in what we might call a performative contradiction, as the speaker announces his presence and thus the action to come, while the effect of the statement’s deployment in the painting is to freeze the action, leaving it dangling before an uncertain future. Interested as she was in the philosophy of Ludwig Wittgenstein, Schendel seems here to dialogue with the philosopher’s claim that truth statements are always linked to facts or ‘states of affairs,’ that are not linguistic, and moreover that what founds this connection cannot be expressed in language. Hence, by evoking this scene of visceral pain and death, Schendel gestures beyond words, entirely framed within words, and the historical concreteness of the ancient narrative. Tragic-comedically apropos are the bold capital letters dominating the work, surrounded by floating, abstract features of the ancient narrative such as an archway, chariot wheels, a spear, presaging a combinatory quality to her use of language that thereafter will multiply in Schendel’s work. Linguistic referents unfix and mix in the spillage of world building. From the mid-1960s onward, Schendel employs her own handwriting alongside the standardization prefabricated transfer lettering.
In the 1980s, several years before her death, Schendel remarked that her work has been perceived as dryly intellectual, which she believes is wrong. Taking aim at a simplified dualism she remarks that ‘intellectual life, let’s say, even it assumes a specific corporeal disposition; in other words we can never withdraw ourselves from corporeality.’ Considering her approach and concerns, one can imagine such a perception must have existed throughout her career. This would have begun with her educational background. Schendel studied philosophy at university in Milan until she was abruptly ejected when, during World War II, racial laws under the fascist government in Italy designated Schendel as Jewish. Her citizenship was revoked and she was no longer allowed to attend classes. This began a long period of repeated migration that sent Schendel through many places including a longer stay in Sarajevo, and finally to Porto Allegre in Brazil, where she settled at the beginning of her thirties. It was there that she recommenced her work in the plastic arts. Other commentators on Schendel’s work see this history of war and displacement as especially prominent in her series of ‘Monotipias,’ which combines words from languages that Schendel spoke, such as Italian, German, and Portuguese as well as Croatian, Czech, French, and English. The many works in that series span from overfull list-like formations of terms to simple and spontaneous compositions of lines and words. 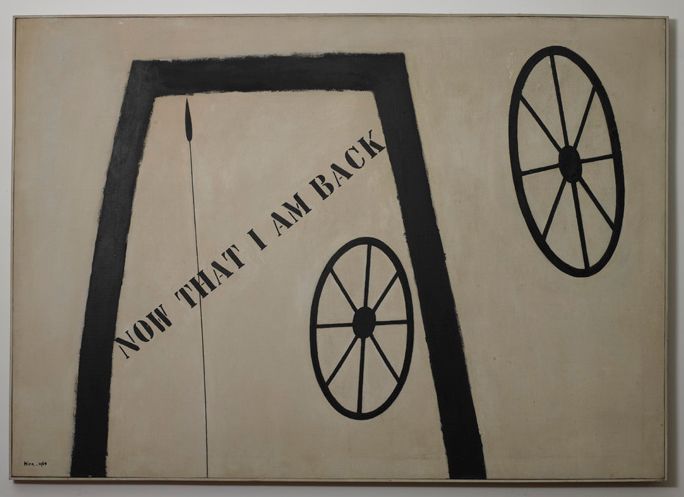 Prominent in the ‘Monotipias’ of 1965 is loaded German philosophical vocabulary such as ‘Zeit’ (time) and ‘Umwelt’ (environment). At the root of Schendel’s practice is a fascination with the relation between language and the world it describes, a fact reflected in her philosophical influences. In his introduction to Ludwig Wittgenstein’s ‘Tractatus Logico Philosophicus,’ Bertrand Russell sums up Wittgenstein’s main object of inquiry in the question: ‘What relation must one fact (such as a sentence) have to another in order to be capable of being the symbol for that other?’ [1], a question that appears to occupy Schendel in an inverted form as demonstrated in her works that seem to figure language at its limit points. Apropos of an unidentified exhibition, Schendel wrote: ‘The works on display have resulted from a hitherto frustrated attempt to catch the discourse right at the moment of its birth. I know that, in fact, I have a problem in that immediate life, i.e. the life I live and within which I act, is solely, incommunicably mine, and, for this reason, senseless and without purpose. On the other hand, the realm of symbols which seeks to seize life (the realm of languages), is an anti-life – in the sense of being something intersubjective, ordinary, devoid of emotion and suffering.’ [2] She goes on to state, ‘if only I could match these two realms, I would combine the richness of living experience with the relative immortality of the symbol. […] Obviously, therefore, for this endeavor I must seize the very instant in which the living experience seeps onto the symbol, which in this case is the letter.’[3] In terms taken from Heideggerian phenomenology, discourse or logos (‘letting something be seen’) sits squarely on the side of phenomena (‘self-showing’) through whose mediation individual beings can have true relation to Being. Hence Schendel’s attention to discourse is precisely her way of pursuing ‘immediate life.’
Schendel’s fascination with this problem comes across most vividly in her clustering of forms of written language – words, and graphemes and the fragments in between – in her series of ‘Objetos Graphicos.’ These are words whose own materiality erupts in the ways that words stick, and jar. In these works the artist uses a clear acrylic material to support fields of scattered letters, hand written, stenciled and transfer letters, clustering, building up, pouring. Little groups of letters – some too tiny to read – speckle canvases, a few scratched in white onto pale murky white surfaces. ‘Beelike letters swarming and solitary/ all-pha-bbb-ees’ wrote the poet Haroldo de Campos on Schendel’s work, likely referring to the particular letter that predominates in the ‘Objetos Graphicos,’ a handwritten letter ‘A’ repeatedly marking the ‘Objetos’ in a little star as if the pen writing ceased to leave the page. These little ‘A’s are repeated so relentlessly that they link up in chains, little wreaths of graphemes wandering the empty spaces of the acrylic canvas. As the first letter of the Roman alphabet ‘A’ implies a search for meaning, progression, colonization. ‘A’ as the avant-garde of signification.
At least for a period, acrylic seemed a perfect formal translation for many of Schendel’s projects. Schendel says of the material that it gives ‘a false transparency of explained meanings, not the clear, flat transparency of glass […] the mysterious transparency of the clarification of problems.’ Thus by using acrylic sheets as both material and conceptual support for these thought objects, she gained the ability to display both sides of the work, doing away with front and back. As the viewer moves around it, the spatial relation of the picture gets expanded. When light passes through these works, it scatters shadowy ‘fragments of language across the floor.’ [4]
During the years of Schendel’s friendship with philosopher Vilém Flusser, he wrote of her works: ‘They are attempts to make concepts imaginable […] Mira’s work fulfills a violently de-alienating function. One of the aspects of our alienation is the unimaginability of our concepts, but it is an alienation that can be overcome through the new imaginative force Mira gives us.’ [5] Flusser seems to have seen Schendel as engaged in a project of translating concepts from thought into plastic phenomena. John Rajchman writes of her project as ‘a new way of thinking in and through art […] in between ‘art and philosophy,’ or in a new indistinct zone in between the two.’ [6] However, we might instead interpret Schendel’s project in a place of deliberate indistinction between art and philosophy, and in this case the salient practical feature of her strategy turns on a question of legibility. How, then, is Schendel’s work legible as philosophy and as art?
This major retrospective of Schendel’s work was a strong beginning of the development of international knowledge around her work. If the artist seems to have been neither famous nor ‘undiscovered’ during her lifetime, due to the nature of today’s art-knowledge economy this makes her in many ways a perfect candidate for revival, in that the artist carries a prestige of history and influence as well as satisfying an insatiable need for novelty. This exhibition leaves one with the conviction that Schendel’s serious, and seriously interesting, hybrid explorations in philosophy-as-art are propositions and problematics that deserve ongoing attention.
[1] Bertrand Russell, Introduction to ‘Tractatus Logico Philosophicus,’ London 1999, p. 8.
[2] Mira Schendel, ‘Statement,’ in: Tanya Barson (ed.), Mira Schendel, London 2013, p. 196.
[3] Ibid.
[4] Laura Barnett, ‘Mira Schendel: the refugee from Nazi Europe who settled in São Paulo,’ in: The Guardian, September 13, 2013.
[5] Mira Schendel in Dialogue with Vilem Flusser, Cauê Alves, in: Mira Schendel, op. cit., p. 25.
[6] John Rajchman, ‘Mira Schendel’s Immanence,’ in: Mira Schendel, op. cit., p. 50.