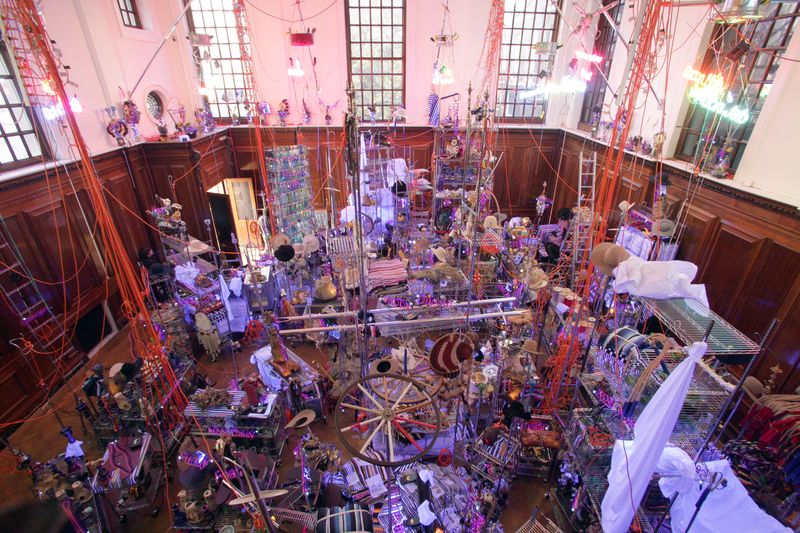 Sculpture for Jason Rhoades was a question of volume, not only in the sense of taking up space and completely occupying boxes, tubes, beams, electrical appliances, shelves, even video games from bars and so forth and so on, but volume in terms of sound, as in, TURN UP THE FUCKING VOLUME!

It was sculpture to bust an eardrum, rough sculpture, loud, colorful, and messy, a car radio at full blast, sculpture of the passing lane and therefore of the cemetery, but a technicolor cemetery, overflowing with stuff and junk and trash, often new stuff, not rusty, actually brand-new stuff. Garage sculpture, or maybe basement sculpture, the landfill—the garbage dump of an affluent society, where people throw away things that are still new. Recycled sculpture, work like a pulsing ecosystem, alive despite being artificial. Red, yellow, white, blue, those colors there, stuff from the hardware store and the warehouse, but also the colors of the American flag. Sculpture, mass, subway jungle that extends into infinity, as Los Angeles extends into infinity, the place where Rhoades lived and died, or a sculpture like Canal Street, New York’s junk space, Chinatown streets with stalls of hundreds of thousands of objects piled up and bought and sold and held together nearly by chance or by secret rules, but anyhow a sculpture that in a certain sense is best seen from the car, in the car, looking outside from the window, also because the car is at the center of all of Rhoades’s work. His first show in New York, in 1993, at Zwirner, was a real garage, with Chevrolet motors and a bunch of mechanic’s tools, the motor worked and made a sort of drill turn. It isn’t by chance that for Americans energy, force, both physical and spiritual—that energy that fills all of Rhoades’s work and the fact that he died of a heart attack, from energy which in that case is a destructive force, that takes breath away—is called drive. Just like to drive a car, practically as if energy and the automobile were interchangeable synonyms. It must also be said that Rhoades made sculptures like Kerouac wrote—nonlinear, verbose, bulimic. Rhoades was really gigantic, no less than SUPERSIZE ME. Look at him there accumulating everything, holding it in equilibrium—like he said—impossible to be a juggler—and it is still him who speaks—with an electric saw, a rubber ball, and a living African elephant, because—always speaking in his hyperbolic way—my work speaks of these disgraceful machines, moving so constantly it seems like they work on their own. 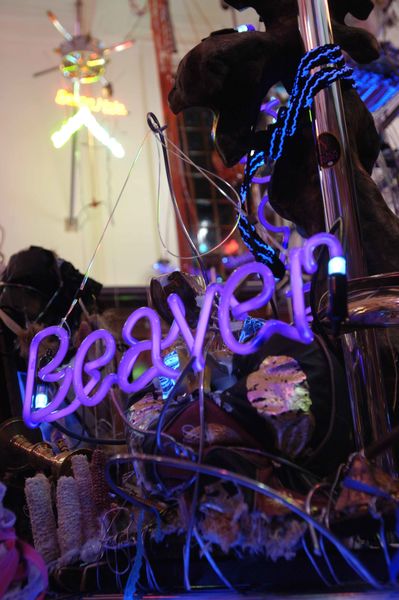 Machines more or less celibate, machines that produce but at the same time celebrate function and waste, energy and entropy, masculine machines, masculine as in stupid, onanistic meaning masturbatory meaning therefore DIY—in Rhoades’s work there are ten or so machines like this. In Venice, at the biennial, maybe you remember it in 1999 with two giant works, because naturally according to Rhoades’s appetite—he was also chubby, naturally, an ideal consumer, corpulent—because Rhoades’s appetite wasn’t satisfied with participating with just one work, and that’s how he was at the Danish Pavilion—like a good American he went to someone else’s house to make trouble. With a collaborative installation that was a celebration of speed with go-karts and barbecue, hot dogs and cases of Bud—with Paul McCarthy at the Arsenale with Propposition, a true hell of bric-a-brac and Homer Simpson’s doughnuts and mechanical towers with giant dildos and an assembly line with yeast and dough passing by. For Rhoades the world was an apparently senseless accumulation, playful, freeing in its infinite possibility, but also suffocating in its sheen of newness, as if the products were animated, were crazed and had conquered the entire world, pushing us once and for all to the sidelines, the rest of us vacuum packed, suffocating.
With Paul McCarthy, who was also his teacher, Rhoades literally tried everything, even collecting shit from the toilets at Documenta to pack in strange containers in the form of suppositories. It must be said that at times Rhoades exaggerated and in the heat of passion he let himself go and not all of his works are masterpieces and maybe he didn’t even make one masterpiece, but maybe he wasn’t trying for that, maybe rather than a masterpiece he sought to make an opus magnum because in the quantity and in the cycloptic size of his work he looked for his personal style. But even without masterpieces Rhoades remains a crucial artist, truly important for the last ten years or even reaching further back, and there are those who give all the credit to McCarthy, but in reality he took as much as he gave, and if today McCarthy is recognized as the teacher he is, it is also thanks to Rhoades who relaunched a Dionysian, chaotic, and formless world. Then again it is the same world that many dream and live in in their own way, people like John Bock, Mike Kelley, or Thomas Hirschhorn, and even earlier the great Dieter Roth. A world that to some my be too testosterone-filled, or masculine and muscular, but still has important examples in very feminine artists such as the gruff Cady Noland and the abstruse Matthew Barney. Because at heart it is in their wake that Rhoades emerged in the early 1990s: with them Rhoades is among the first to propose the idea of a show or a work as immersion. Those shows by Rhoades and his companions must be entered like one enters into a film, or a shopping mall or an amusement part: one doesn’t go to see the work or the objects, but to have a total experience. 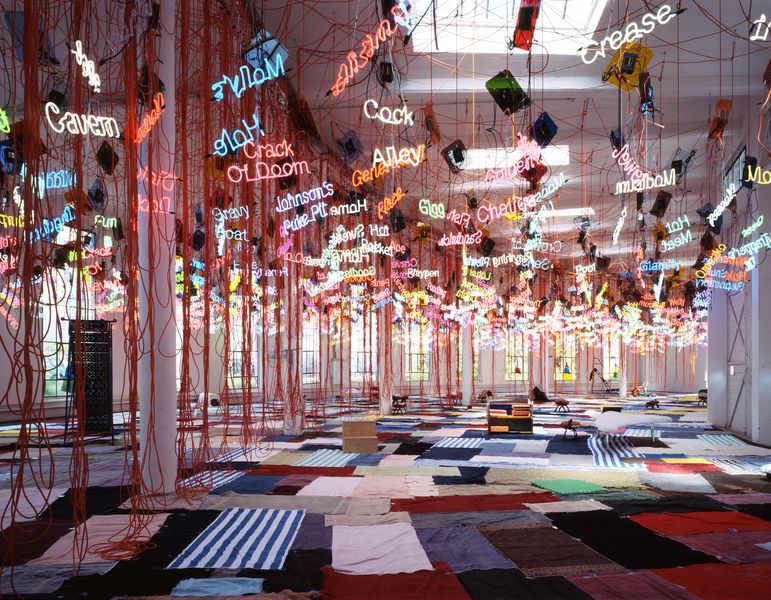 For Rhoades this totality also always had something unhinged, improvised, and it sometimes delved into the ridiculous or obsessive, not to mention into the vulgar. Everything had to be linked, amassed, compressed, also at the cost of appearing absurd, senseless. Among the obsessions he followed over the last years was the compilation of a giant list of lewd synonyms for vagina. He collected nearly seven thousand, only in English, and in a couple of shows he rattled off six hundred of them, transforming them into neon signs and elaborate installations. Of course these projects did not gain any sympathy from feminists or the politically correct. And even if he didn’t speak in a refined manner and to look at him he seemed like an American kid ready to drink a beer at the Super Bowl, Rhoades was certainly not macho. Rather, his task was to imitate and replicate to infinity the lowest and most disgusting elements of American society and above all a white and male and blunt America, an America that runs on empty, without understanding, just like a single machine. His immersion into the world of middle-class America was perhaps more than anything a form of exorcism.
The first time I met Rhoades, not that we were friends or anything, but anyway the first time I met him, after having discovered that I was Italian, he proudly showed me his Valleverde shoes—exactly the type for taking a lovely walk in a valle verde, a green valley, with Kevin Costner smiling in the ad. He bought his pair of Valleverde because of his incomprehensible mania for emulating Kevin Costner. Rhoades had a bizarre fixation, maybe because Costner was the incarnation of the icon, a bit tarnished but timeless, of the American hero, the last sheriff, good at all costs—the clean soap-washed face of America that Rhoades imitated in his work, in order to at once celebrate, destroy, attack, corrode, and mess up. His biggest installation, actually huge—at the time he called it THE BIGGEST SCULPTURE IN THE WORLD, the stuff of Guinness World Records—Rhoades created it in Hamburg and titled it Perfect World, a perfect world, just like the Clint Eastwood film with Costner as the leading man, robber on the run but always a gentleman, Costner who besides walking in the green valleys of the American dream was even able to dance with wolves and align himself with the Native Americans, who knows what the Arabs would do nowadays. 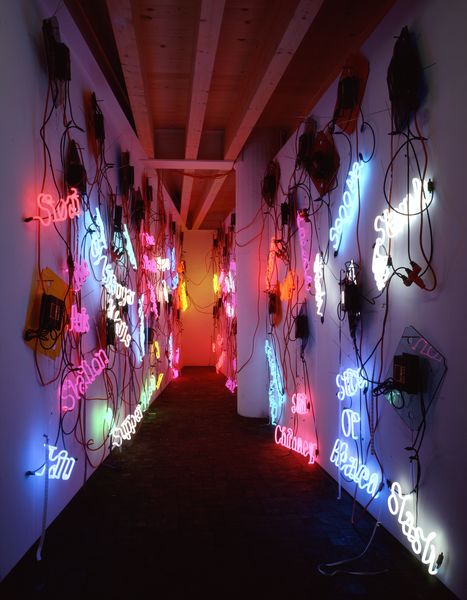 Recently Rhoades became fixed on Arabs and Muslims, always searching for an open nerve and the fears of the American media. This is how Rhoades ended up making his installation Meccatuna, a replica of Mecca, created, however, with nearly a million Legos that were assembled during the course of the show. An idea that seemed absurd at first glance, offensive, even, but then looking closer, the project was not so far off, because somewhere Rhoades read about the cubic form of Mecca, silent and austere, it is said to trap divinities and idols dating back to pre-Islamic times, closed and imprisoned since the dawn of monotheism. Mecca, in its minimalist perfection, would be a fortress against the proliferation of images, substitutes, and products that instead still flourish, pollute, and suffocate our world that is so clamorously polytheistic, of which Rhoades was one of the most delirious cantors.