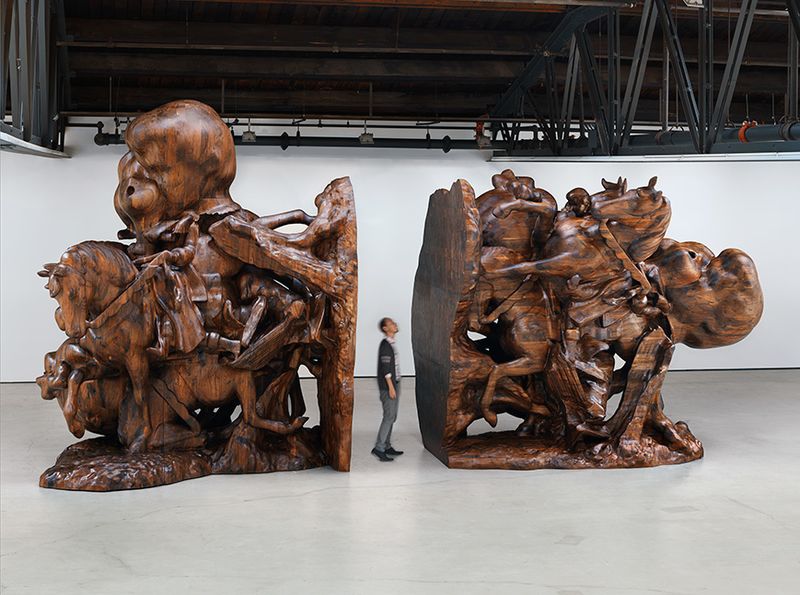 Today, surreal is a word so overused that it means little more than something unexpected, entertaining and forgettable – perhaps a pitcher nearly throwing a no-hitter or a criminal smuggling snakes in a potato chip container.
For Paul McCarthy, it’s a lot more than that. His incisively weird works are unforgettable. They turn cliched language into lively dialogues with lasting consequences.
To step into the big, theatrically lighted gallery that houses ‘Paul McCarthy. WS Spinoffs, Wood Statues, Brown Rothkos’ is to be dwarfed by 9 monstrous sculptures and 10 roughly textured tapestries.

Polite visitors might say that McCarthy’s 12-foot-tall carpets coated with foam and polyurethane have the patina of weathered metal. But it’s more truthful to describe their palette as poop-brown. That captures the abrasive honesty of McCarthy’s fantasy-fueled Realism.
His figurative sculptures trigger even more conflicted emotions.The first thing that hits you is their size, weight and the forceful authority of both. Standing 5 feet to nearly 15 feet tall, each has been cut from one or more humongous chunks of black walnut.
The wood is gorgeous, the workmanship exquisite. Both take you back to the Renaissance, when artists carved saints and kings to impress citizens with their superiority.
McCarthy’s subject matter is different. Dopey, Snow White and the Prince populate his sculptures. Occasionally, they look as if they have leaped from the folk tales collected by the Brothers Grimm – by way of Disney. More often, something appears to have gone wrong — very, very wrong – in the transmission from 19th century folk tale to 20th century movie to 21st century sculpture.
Details are lost. Faces ricochet from ecstasy to agony. Horses are transformed into multi-headed beasts. Figures fuse, as if dissolving into – or rising out of – primordial soup.
In one, Dopey becomes a mutant totem pole, each of his faces bigger than the one below it. In another, a flower girl splits in two, like a cell undergoing mitosis. In two others, Snow White appears to be sick to her stomach.
The horror show that unfolds is not nearly as disgusting as it sounds. Part of that is because of the Old World elegance of the wood and the exquisiteness of the craftsmanship.
More important, McCarthy’s giant knickknacks come off as believable. Although they take visitors on a wild ride through several centuries and various forms of art, they have their feet firmly planted in reality, in times whose weirdness is deeper and more troubling than the art’s.