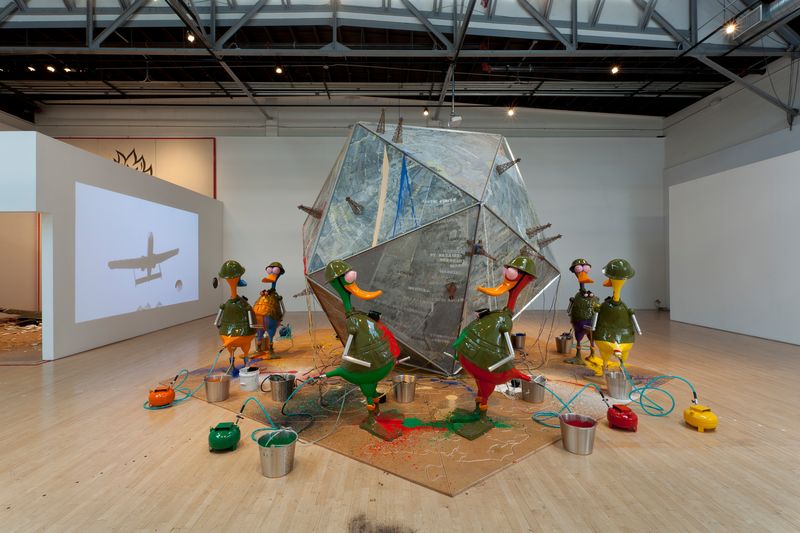 An Army of One: A Conversation with Richard Jackson

Wiping his beleaguered hands over the table like temperamental car wipers, ageing American artist Richard Jackson reclines in his seat for the length of the interview, in a manner befitting a man drawing breath from a prolonged pursuit for recognition. Jackson is a veteran of the west coast, where he originally shared an apartment in Los Angeles with performance artist Bruce Nauman. And he recalls at the time, how they drew inspiration from one another; in a determined attempt to replace the franchised interests of modern art for something gustier. Drawn on the dynamism of American art, Jackson goes no further than Nauman, whom he regards as possibly the most important contemporary artist to have lived in the modern era. Insisting how ‘we all owe something to him, everyone. I mean you can’t deny it, can’t say you were doing it at the same time, not true.’ Yet at the same time it is impossible not to draw comparisons between the grandiose spirit and scale of artists like Paul McCarthy, Mike Kelly, and Ed Ruscha; with his own work. As a generation of artists who profited from conceiving of a messier aesthetic.

Yet in spite of such collateral commonality, for Jackson everything is his own. ‘What is of interest to me is not how things are the same, but how they are different. This doesn’t have to lead to this, it could just lead to nowhere.’ And at its fractious nucleus Jackson’s artworks have always propositioned a perverse alternative to the pedestrian pattern of things. That could well be likened to tipping a heavily ladened table over onto the floor, in order to revel in the damaged disarray thereafter. His is a glorious celebration of failure, as it determines all of his decision making. Propositioning work that is as likely to collapse under the weight of expectation of an audience; as it is likely to perform perfectly well.
And for all of the misanthropic energy harboured at the institutional interests of art; Jackson embattled and bitter, recalls something of the spirit of Fluxus artist Joseph Beuys. Who revelled in the ‘difficulty of explaining things,’ and whose performative work was governed entirely by the gravitas of the moment, in the shape of ‘the happening.’ For Jackson the happening is his entirely, as he professes to enjoy the anticipation in his works of something greater. ‘I think I don’t like to do (the performative element of the work) publicly. Because what I am trying to do is a number of things. I want to stimulate people’s imagination, because then the event becomes bigger.’ Yet in spite of such criticality as context, Jackson appears inexhaustible deterred by the critical isolation he suffered up until now.
Jackson was making art for several decades; working in construction and teaching college students, before receiving any kind of recognition. And he professed to feeling as frustrated by those protracted circumstances, as he was determined to remain on the fringes of contemporary culture. Less interested in idle semantics, the crux of what Jackson has attempted to do for many decades now, is in allowing there to be ‘evidence of an activity or performance’ within his work, as he describes it; and crucially conjuring an ‘activity’ that is ‘without any kind of audience.’
As his choreographed silicone, steel, electronics, paper and paint, perform in a gratifying misadventure of tampered objects as art. Critically prior to his 2013 Hauser & Wirth solo show, he details how ‘the last show was three years ago, and before that I didn’t show for twenty years in Los Angeles. There was absolutely no suppose, and there still isn’t. I have no commercial support. I have a lot of attention now, but showing commercially in Los Angeles, never going to happen. I will never get any success from that. Never. And what I realised it is like hitting yourself with a hammer. It feels good when you stop.’ Recognising that the merit of any commercial success was challenged entirely by his own actionist approach to art, Jackson has always operated as an army of one, who eulogises failure; not only as a remedy for his own failings to some extent, but also as a necessary alternative to the routine of success. And for that he is as compelling an artist as Bruce Nauman has become. 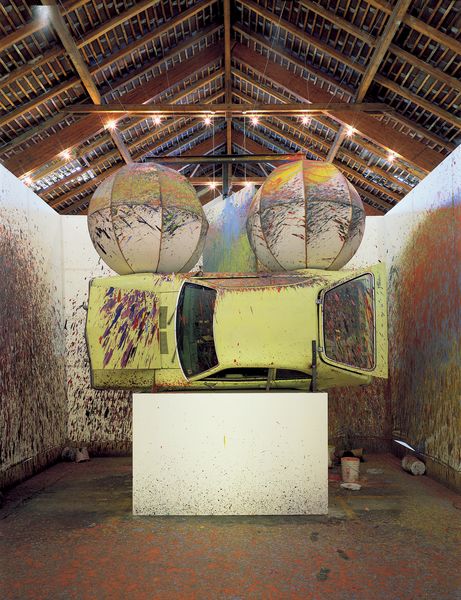 I want to stimulate people’s imagination, because then the event becomes something bigger. A lot of my work is about scale, in relation to one person. I am interested in what one human being can accomplish on their own.

We are having a conversation here, during a period of our conversation a hundred and fifty thousand works of art have been completed around world, and that’s the age we are living in. And so it’s not a sacred kind of thing anymore, and it shouldn’t be. And that’s the thing with my wall paintings. Nothing is forever. Everything has a beginning and an end. 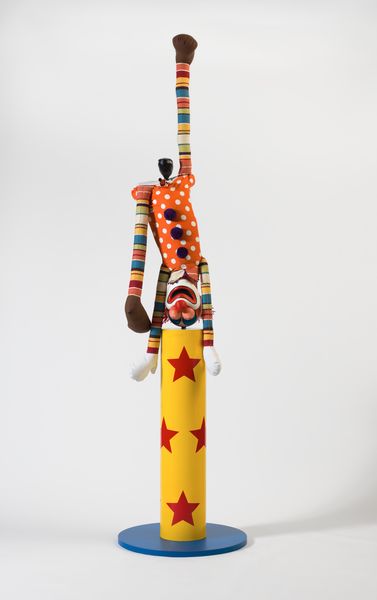 RP: What intrigues me is how you define yourself; as ‘actionist,’ ‘artist,’ ‘anarchist,’ or ‘interventionist’?
RJ: Someone else asked me that, and I think I said I was an ‘art terrorist.’ But you know my definition of art is ‘unusual behaviour.’ As soon as you start acting normally in this corporate atmosphere, then maybe you are not an artist anymore. We are a group of people, and this is a job, that’s all it is. Don’t apply any more importance to it than there really is. It is just a job, so don’t try to connect it to something that doesn’t make any sense anymore. Don’t try and connect yourself to Andy Warhol, because that’s not modern. We are living in a modern era, and nothing is sacred in the environment we are in. We don’t own a computer or a cell phone for more than two years. Why do we have to keep all this crap around us?
We are having a conversation here, during a period of our conversation a hundred and fifty thousand works of art have been completed around world, and that’s the age we are living in. And so it’s not a sacred kind of thing anymore, and it shouldn’t be. And that’s the thing with my wall paintings. Nothing is forever. Everything has a beginning and an end. Everything has a life and a death. And there is no reason to make these kinds of things based on a certain atmosphere that are cared for and are different. And it would be nice if the work would sell for less money, and then there would be less importance attached to it.
Only money does that. And then it could be sort of like short term, and make room for more of it. Like new ideas to come in from younger people, or whoever has new ideas. Instead of the old ideas revisited, and also doctored up; and then you don’t get as much change.
RP: How do you expect an audience to engage with your work?
RJ: They may not be able to relate to it physically. I think that I have a great sense of humour. I think that comes through, and then I also have a certain kind of irreverence. Maybe most people are timid or shy people. Or people who can’t express themselves honestly would enjoy my work. ‘God I wish I could do that.’
RP: Your commercial success hasn’t been as you would have wished; how do you feel about that?
RJ: It’s my fault. The thing you have to do, is that you have to except the consequences for your behaviour. I don’t go in there with the intent that somebody is going to change their attitude and buy anything. This is what I want to do, this is what I want to show people, and this is what I want people to think about. I want them to think about what I do, and I want it to be different from everybody else. Not purposely, because I am different. That’s what I want to do. I don’t think those installations are going to sell. There’s no way in hell. The wall paintings are not going sell. People want me to revisit those wall paintings. If I live another forty years they still won’t sell. Because they don’t fit in. They still don’t fit in. I am so proud of that.
RP: Why was the west coast, and Los Angeles in particular such a difficult place to exhibit for you?
RJ: The last show I had was three years ago, and before that I didn’t show for twenty years in Los Angeles. There was absolutely no suppose, and there still isn’t. I have no commercial support. I have a lot of attention now, but showing commercially in Los Angeles, was never going to happen. I will never get any success from that. Never. And what I realised it is like hitting yourself with a hammer. It feels good when you stop. So I stopped. Because I was financially supporting my own work. Putting up big big projects, like ‘1000 Clocks.’ I made those clocks, I paid for those clocks. It cost me a hundred thousand dollars. Money I made working in construction. And people know who I am, but commercially it’s never going to happen there. A drawing not anything. And yet I am asked to donate drawings for fund-rising things and so on. So it’s not like they don’t know about me. But it’s not going to happen. I don’t show a lot, I just want to make a living. I want to show enough to make a living. Not compromise my work at this point.
And I think now I am old enough, and people have enough respect for me to make that happen. But sometimes you wonder. But like I say you have to be willing to except the circumstances that come with your actions. And I am smart enough to know ahead of time that there is no commercial value in this stuff. But I want to make it anyway. Because if I don’t make it, not many people will. And then maybe what I am shooting for is that maybe they will have enough respect for me to take care of me somehow.
–

‘Richard Jackson: Unexpected Unexplained Unaccepted’ is a major survey of the artist’s room installations on view at Schirn Kunsthalle in Frankfurt through 3 May 2020.