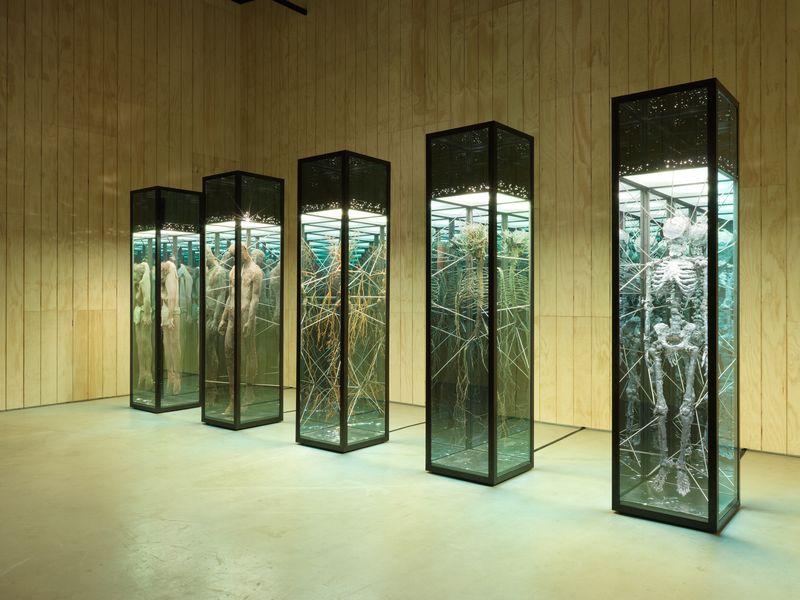 bodies are stolen from some perverse, long-shuttered, anatomical museum and presented in immaculate glass cases. Just outside, there stands an empty and irradiated wasteland. His first solo New York show in three years, the exhibition picks up on themes from earlier work: man-made inventions rife with motifs of existential inquiry—rockets, drag-racing, nuclear weaponry, and new technical innovations in physiology—all interpreted through the retrospective lens of art history.
The exhibition brings to mind Percy Bysshe Shelley’s poem “Ozymandias,” which describes the inscription on the base of a statue that refers to the former grandeur of a now-destroyed landscape. The 1818 poem speaks to art’s impermanence. Something Ancient is well suited to such an insight—a series of sculptures and paintings that are, in part, the fearful products of destructive technologies.
Upon climbing Hauser & Wirth’s massive entryway and entering the museum-sized gallery, the first object encountered is a black racing car suspended over the entrance. Looking up at the guts of “Victa” (2013), constructed by Jackson’s cousin from a design by the artist’s late uncle Skip Nichols, a professional racecar driver, the piece exudes a menacing and destructive aura, the car a metaphor for some latent connection between physical speed and the artist’s own mortality.
A stand-alone room, constructed out of the drywall and siding you might find in a Southwestern home, features a series of anatomical portraits of the human body in standing mirrored vitrines. The traveling ‘freak-show,’ BODIES…The Exhibition (explicitly referenced in the release), is a clear rejoinder. Each portrait presents a different level of observation of the body. Titled “Veins” (2013), “Nerves” (2013), “Muscles” (2013), and “Skeleton” (2013), the encased sculptures are variably cast in bronze, silicone, and wood. These bring to mind the hyper-realistic, uncanny silicone sculptures of Paweł Althamer, and the finale of Peter Greenaway’s film A Zed and Two Noughts, where a pair of identical twins records the decay of their own bodies.
The centerpiece of the exhibition is Jackson’s version of Rodin’s “The Burghers of Calais” (1889). Titled “Magnificent Desolation” (2013) and rendered from collaged images of the sculpture taken on a smartphone, it re-presents the figures, with their features worn down, on top of a lunar landscape that looks like a Google Map of the moon. The sculpture’s physical decay, literally caused by the low resolution of its source photos, finds an analogue in the erosion that might be caused by nuclear disaster or the heat of the sun. Ozymandias’s creations, indeed.
In the next room, Jackson presents a series of massive wall-paintings set in steel frames: a group of topographical renderings of the surface of the moon, and bird’s-eye-views of two cities. “Enshrouded Paris” (2013), shows Paris set in International Klein Blue. That color, which Yves Klein patented in 1960, a fusion between the color palettes of the earth and sky, becomes the cerulean haze of a nuclear blast viewed from a few hundred miles away. “August 6, 1945” (2013), presents San Francisco rendered in charred wood, explicitly referencing (in title and composition) the landscape of Hiroshima. Together, they draw a none too subtle connection between the American drive for space exploration and the destructive results of the development of nuclear technology. “Farside” (2013), presents the tidally locked far side of the moon, another clear metaphor for a landscape marked by the effects of nuclear fallout.
It is said that Shelley was inspired to write “Ozymandias” after the strange experience of seeing a broken statue of Ramesses II that had ended up in the British Museum. Jackson’s touch is a great deal heavier than Shelley’s. Walking through his exhibition, one can’t help but wonder about the ultimate fate of these objects, and of the larger world they might come to inhabit.
SaveSave