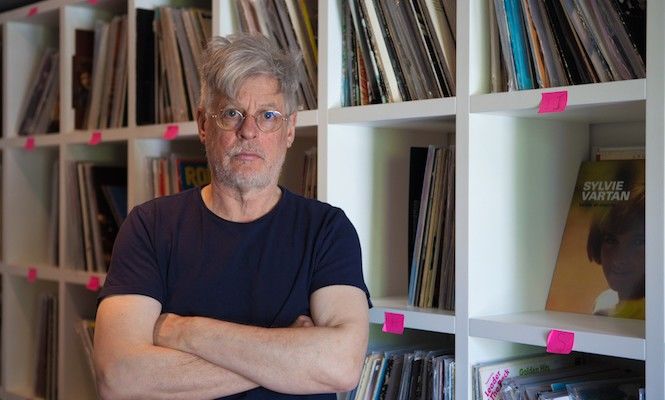 To quote Sonic Youth’s Kim Gordon, Graham has always kept the question open: ‘Am I a musician trapped in an artist’s mind or an artist trapped in a musician’s body?’

Graham’s new album ‘Good Hand Bad Hand,’ perhaps his most accomplished to date, showcases his signature blend of rock ‘n roll, psychedelia and folk tinged country with a fine line in deft lyricism influenced by Jimmy Webb, Neil Young and Lou Reed. With regular and special box set editions out now, the Vancouver-based artist takes this opportunity to reflects on the records that mean the most.

My favourite record as a teenager: Until ‘Rubber Soul’ I was a jazz snob. So my favourite would have maybe been Ornette’s Live at the Golden Circle in Stockholm, volumes one and two recorded in 1965. Beautiful austere music and one of the greatest Blue Note album covers, but that’s a whole other story. I thought these guys were the hippest thing ever, and they were: Ornette in that trench coat and top hat; David Izenson in shades, a cape. Wow. I still love these two records.

I always loved the Beatles but Rubber Soul was another thing altogether. I spent many hours listening to this and besides, again the cover was so great, especially John in that brown suede jean jacket. I eventually got one sort of like it (Margiela). Ok ‘Rubber Soul,’ an acknowledged masterpiece, not a very original choice but I cannot lie. 1965 was a good year for music and fashion to say the least. I am not going to say that it has been going downhill ever since, but it was a high point.

The record that changed my life: That’s a hard one, but I guess I have to go back to Rubber Soul insofar as it changed my listening habits, and I got more into pop music. Recently my listening patterns were changed by The State vs Radric Davis, Gucci Mane’s album from 2009. A great record. Kush is My Cologne. Now I listen to more hip-hop in my car (Travis Scott is good) since VF’s Sean Bidder showed me how to make a playlist on my phone! I actually have ‘Lemonade’ as a ring tone but I’m thinking of changing it because it can be embarrassing.

My most played record: In my car it’s ‘Pari’ from Trapology. This song is hilarious, with Gucci singing in a kind of French accent and the cover is brilliant: Einstein with the ice cream cone face tattoo. I think he is wearing the Bart Simpson pendant as well. At home where it is ‘strictly vinyl’, I often enjoy ‘All I Want to Do’ from Sunflower by the Beach Boys. I was turned on to this song by Bob Stanley who has such great taste. His book Yeah Yeah Yeah introduced me to ‘Fanny Be Tender With My Love’, the greatest Bee Gees song with the most unfortunate title.

These days I find a lot of songs too long and it drives me crazy. I suppose its the modern disease. I am listening to some song by Lynrd Skynrd thinking it’s the best thing ever but after 2 minutes I’m sick of it. God bless Neil Young, I love him, but don’t even get me on to Psychedelic Pill. Kurt Vile is someone who can write longish songs that work though: ‘Pretty Pimpin.’

The record I would most likely be caught making love to: Hmm.. If I was actually caught it would be ‘Sex in Crazy Places.’ Gucci Mane again. Just kidding. Back in the day it would have been Sketches of Spain, or Tapestry.

The record that will be playing at my funeral: Something really beautiful like ‘I Just Wasn’t Made for these Times.’ I didn’t really develop a full appreciation for Pet Sounds until the nineties. How I missed the boat on this one in the Sixties is a mystery to me. I always liked the hits but the full genius of the album didn’t hit me till later.