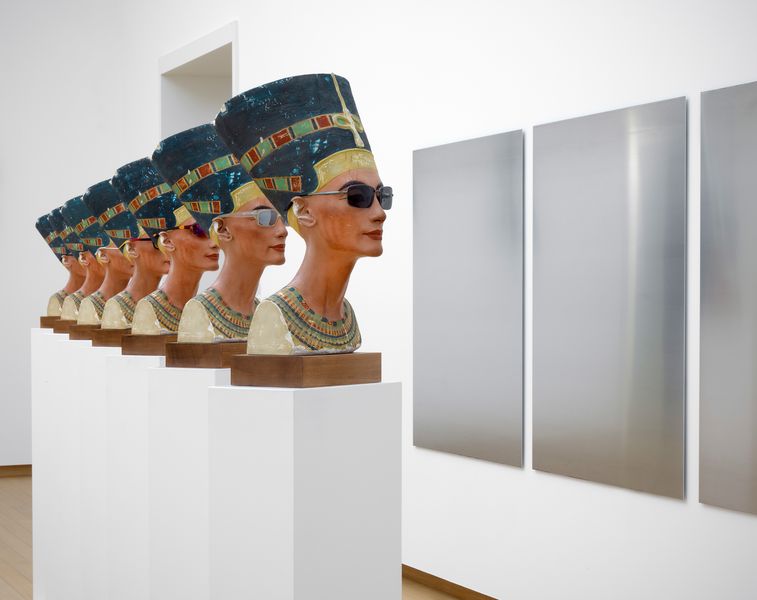 Three small, scruffy plaster sculptures from 1984 sit in one of the 18 rooms in ‘Mach Dich hübsch!’ (loosely translated as ‘Make Yourself Pretty!’), an immersive exhibition that brings together forty years of Isa Genzken’s work.

The sculptures are early indications of the artist’s core interests, which are lucidly traced throughout the show. ‘Müllberg (Pile of Rubbish),’ a gnarly lump of bound scraps of string, crumpled paper and shrapnel, addresses the debris that surrounds us. Architecture and information as shapers of experience arise in ‘Data,’ a more chiselled structure sheltering two miniature wooden chairs. In ‘Mein Gehirn’ (My Brain), an organ-like plaster mound daubed with red paint and sprouting a curved wire antenna, the self is visualized as the receiver and active transformer of input from the outside world.
Throughout her career, Genzken has employed various materials and scales, and traversed from three dimensions to two and back. But her fundamental interests remain constant – as this dense, comprehensive exhibition demonstrates to majestic effect. There are bodies as abstractions, wild and literal in dressed-up mannequins, or seen via X-rays. There are buildings in crumbling concrete, as flimsy glassy towers, or reduced to flat reflective facades. Items of consumer culture and media extracts abound. But, most of all, there is the artist herself: her face, her clothes, her ear, her brain. As the exhibition combines different bodies of work and establishes juxtapositions that bypass chronology or synchronicity, we start to see the world through Genzken’s eyes and analyze it as if through her mind. Her work becomes a kind of lexicon of cultural materiality, identity and experience seen as the twentieth century passes into the twenty-first. 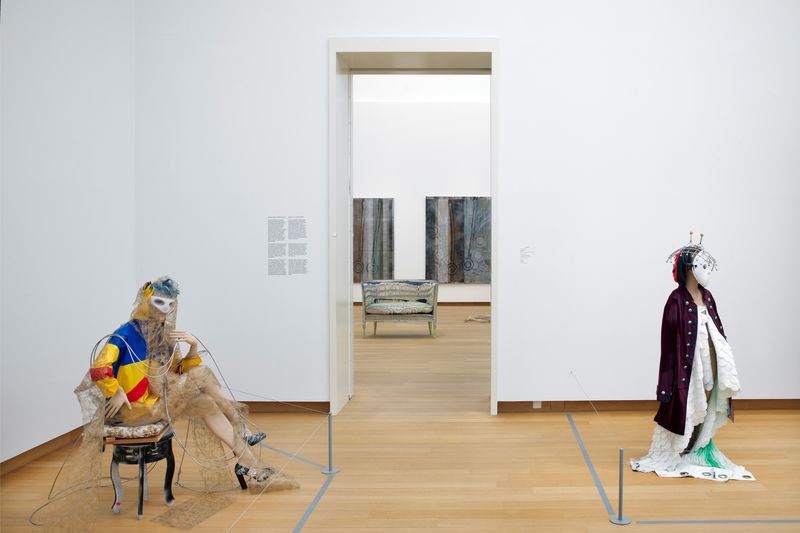 Following on from the 2013 touring retrospective initiated by MoMA, New York, as well as large-scale shows at the Whitechapel in London and the Museum Ludwig in Cologne, this exhibition at the Stedelijk is the biggest yet, comprising 287 works, ranging from prints made in 1968 when she was 20 years old, to new works in her ‘Columns’, ‘Towers’ and ‘World Receivers’ series made specifically for the show. Each body of work is presented in depth: here is not only one ‘Ear’ photograph, but a row of nine (‘Ohren’, 1980), there are six ‘Paravents’ from 1990, as well as a whole wall of her re-photographed stereo advertisements from 1979. The second decisive element is that director Beatrix Ruf and curator Martijn van Nieuwenhuyzen chose to eschew chronology in favour of a loose thematic linking of pieces from different periods, which plots out a vivid landscape. With no prescribed route, the viewing experience is one of circulation and repetition, encountering rooms from different entrances and works from varied perspectives, while moving from overload to restraint, precision to baroque flamboyance. The result is a rich accumulation of associative references.
The exhibition begins with a room that establishes Genzken’s balance of elegance and cacophony. A classical bronze sculpture of a youth greets us mid-stride, wearing a Sony Discman and framed by a monumental three-storey paravent of tiered concrete and gold resin apertures. This is flanked by a loose grid of towers and columns, a kind of pimped-up minimalism made of particle board and mirrored laminate, with secret stashes of collage taped to the reverse side of otherwise austere constructions. These collages make up a diaristic accumulation of the topical (recent newspaper and magazine pages about the refugee crisis), the art historical (a plastic sheeting with Buren-like blue stripes, along with a postcard of an abstract Gerhard Richter painting), and the personal (a snapshot of Genzken with Richter when he was still her husband). Genzken’s own face appears repeatedly in this first room, and intermittently throughout the exhibition, most hauntingly in photographs that picture her asleep, her face covered with a chalky layer, like the death mask of a Renaissance monarch. This regal bearing – and the power of iconography – is constantly reinforced, as her face appears collaged alongside the Mona Lisa (1502–17) or Caravaggio’s ‘Medusa’ (1597), while reproductions of the Nefertiti bust from Berlin’s Neues Museum appear again and again as self-fashioned self-portraits accessorized with sunglasses, wigs, headphones or neckties. The history Genzken writes herself into is not just the recent art history that counts Buren and Richter in its top tier, but a broad cultural narrative that takes in everything from an Egyptian queen to Michael Jackson. 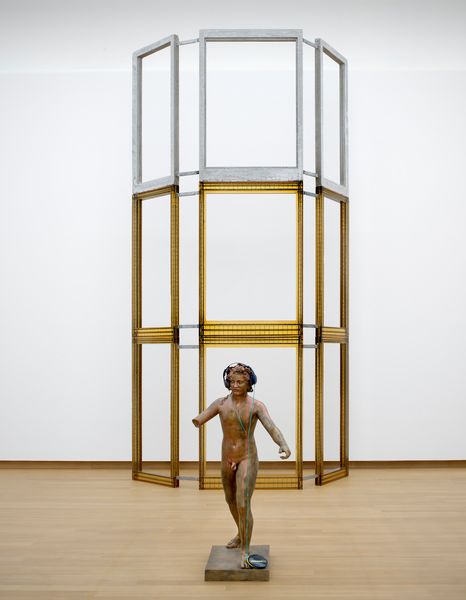 The bombast of this impressive beginning is offset in the large adjacent room by a calm and spacious but eclectic grouping of works. Clustered in the centre is a flotilla of candy-coloured ‘Ellipsoids’ and ‘Hyperboles’ from the late 1980s. On the wall behind them is the series of large-scale close-ups of ears that Genzken made by approaching random strangers on the streets of New York (‘Ohren’). Opposite are ‘Jacken and Hemden’ (1998), Genzken’s own flashily customized garments, hung on the wall like a series of paintings. The body is dissected and analyzed: as an elegant, sinuous form; as receiver of a city’s aural information; or as a means of displaying a self-fashioned identity. At one end of the room are three slim, vertical sculptures from 1983, whose titles suggest their identities: ‘März,’ ‘Diana’ and ‘Meister Richter.’
Oscillations between the general and the personal, society and the individual, occur throughout the exhibition. Likewise, exterior views of bodies or buildings are often countered by a carefully revealed interiority. Peering at one of several concrete models of rooms or pavilions displayed at eye-height on steel stands like a miniature city, you can glimpse a mirror on its interior wall. Accompanying these are several paintings from ‘Basic Research’ (1989–91), a series of oily frottages of Genzken’s studio floor. Whether surfaces close at hand or architectural edifices in the cities around her (primarily Berlin, where she grew up and returned in the late 1990s, but also New York, with which she has had an ongoing fascination since her first trip there in 1977), all falls prey to the scrutiny of her senses. A black and white photograph from 1993 pictures her sitting in a pew in Cologne Cathedral. The work is tellingly titled Atelier – not just God’s house, but Isa’s house: the studio is everywhere, and everything is material for examination. 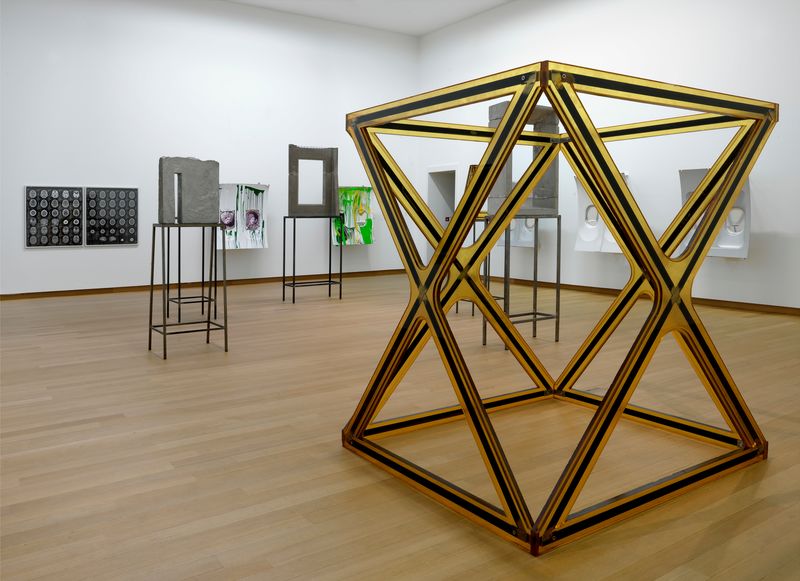 The most surprising development occurs with the narrative that begins with ‘Fuck the Bauhaus’ (2000) – a series of architectural models cobbled together from trash and tape – and develops into the cinematic tableaux of the ‘Empire/Vampire, Who Kills Death’ series (2003–04), with their miniature depictions of post-apocalyptic chaos and disaster. This shifts a few years later with the incorporation of full-scale objects, from furniture and sun umbrellas to wheelchairs, crutches, dolls and, eventually, the life-size mannequins of the ‘Schauspieler’ series (2013–ongoing). We go from being observers of a miniaturized mise en scène to being mirrored and implicated by the full-scale protagonists and objects in the sculptures. Genzken takes on the corrupted mantle of the readymade, using the things themselves to ask how all this endlessly consumable stuff affects us.
Genzken’s is a Nauman-esque enquiry into the nature of contemporary experience. But, whereas Nauman’s existential questions emerged from the confines of his studio and a phenomenological interest in the relations of bodies to space, Genzken’s investigation is thrust into the rush of the big city and seen from the perspective not of her body, but her brain. ‘I want to animate the viewers, hold a mirror up to them. I’m a social person after all,’ she says. Faced with this vision of a garish, hyperventilating, late-capitalist culture, we are forced to consider how it forms us – our environment, our identities, our interactions. Though the same questions come up again and again, the exhibition appears constantly to unfold, offering new insights. Genzken’s work switches you on, and brings you right into a continuous present, as this generous and definitive show makes clear.