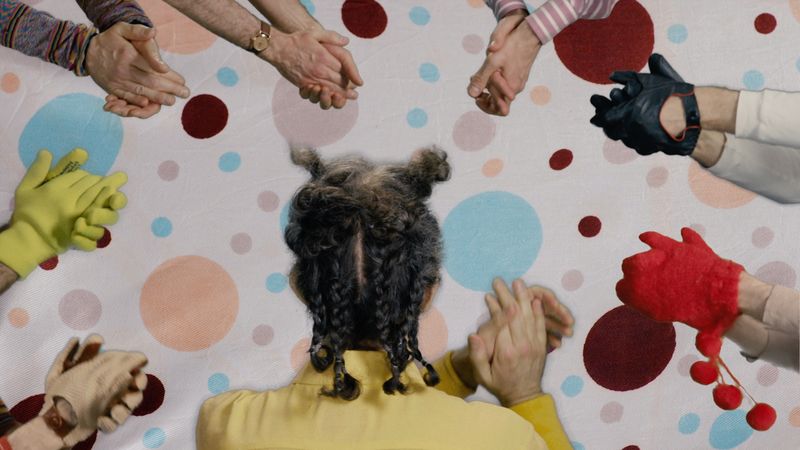 This numbering scheme recalls but also plays with the convention of classical composers’ chronological ‘opus’ system, hinting at Creed’s roots in music. In fact, Creed learned to play guitar and violin in his youth and later formed Owada, a rock trio that put out just one album, ‘Nothing,’ in 1997 (several of its songs were titled with numbers, with lyrics involving counting). After turning primarily to visual art for the following decade and a half, he resumed his musical activity in earnest, making up for lost time by releasing fifty-eight songs across three albums in the past four years. In line with his deliberately (some would say maddeningly) simple visual work, the songs are characteristically brief, melodically uncomplicated, and semi-primitively played. They are also undeniably humorous, with lyrics often consisting primarily of a single reiterated phrase (‘Text me back,’ ‘I can’t say no, yeah yeah’) or a fill-in-the-blank list (‘Everybody needs someone or something to . . . ‘ love, hate, hold, etc.), backed by four chords at the most. If music was Creed’s sole focus, these ‘weird mantras,’ as he once termed them, could seem merely cute, but in the context of his myriad other endeavors they seem to suggest a kinship between his overall aesthetic and stripped-down, post-Ramones songcraft.
SaveSave 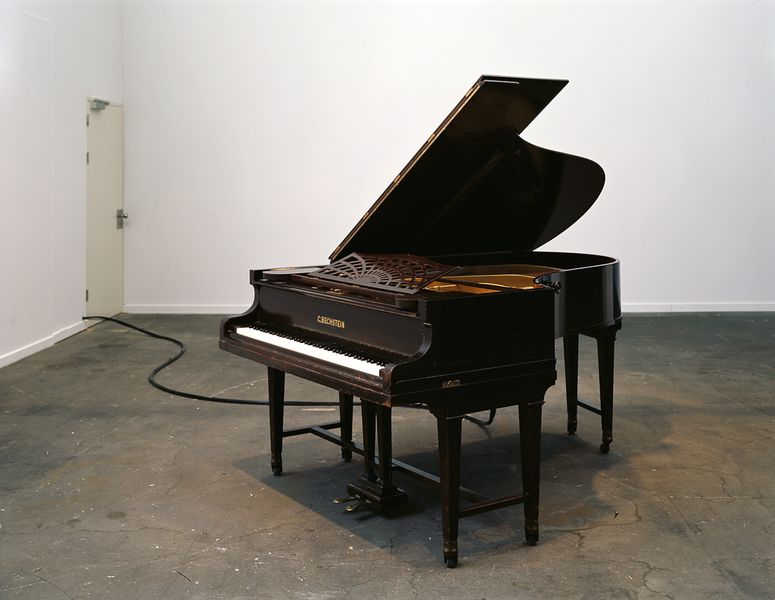 Creed’s insertion of songs into his art practice has never been more convincing than in ‘The Back Door,’ a major survey at the Park Avenue Armory in New York this past summer, which was coordinated with his latest album, ‘Thoughts Lined Up,’ released on the artist’s own label, Telephone Records. Upon entering the building, visitors were immediately confronted with a video of the album’s first single, ‘Work No. 2656: Understanding,’ 2016; as they passed through the galleries, they encountered a single-file troupe of ‘roving musicians’ (‘Work No. 2734,’ 2016) performing songs from the new album (although the vocalist sang through a megaphone, garbling the lyrics). The parallels with Creed’s visual art were inescapable: ‘Work No. 160: The lights going on and off,’ 1996, in which a room is illuminated and darkened at one-second intervals, is as repetitive as any of his songs, as are the close-ups of drinks and cigarettes being continually lifted and set down on a bar in the video ‘Work No. 42: Chrome and Brass,’ 1990–97; the curtain opening and closing in ‘Work No. 990,’ 2009; and the piano lid and keyboard cover slamming shut and reopening in ‘Work No. 569,’ 2006. The excessive, concentrated nature of these mundane gestures is signature Creed—we all flick light switches a few times a day, but never with the obsessiveness exhibited by Creed’s automated piece; likewise, one might say ‘fuck off’ now and then, but not over and over again for sixty-six seconds, as in the punkish song ‘Fuck Off.’ Curiously, Creed’s songs and albums fall outside of his numbered naming template but the songs’ videos do not (e.g., ‘Work No. 1358: Fuck Off,’ 2012). He also maintains separate websites for his art and his music, possibly to designate some autonomy for his musical efforts, however much they cohere with the rest of his output.
During the first week of the show, Creed staged a series of cabaret-style concerts called ‘Words and Music’ in the Armory’s ornate Board of Officers Room. The performance I saw on June 8 opened with the artist alone onstage with an acoustic guitar, expressing some concern that ‘words and music’ was ‘not a good title because ‘music’ is a word,’ and then singing a punning song called ‘Be Natural,’ whose three lines—‘Be sharp / Be flat  / Be natural’—are wedded to three chords: B-sharp, B-flat, and B-natural. He soon brought out his band—an eccentric lineup including two classical music professionals (percussionist Serge Vuille and saxophonist Laurent Estoppey), psychoanalyst and author Anouchka Grose on electric guitar and lap steel guitar, and backup vocalist Onome Djere—to play the lion’s share of the new album along with some older material like the crowd-pleasing ‘Fuck Off’ and ‘You’re the One for Me’ (also represented by a video in the exhibition, ‘Work No. 1429: You’re the One for Me,’ 2012, once again blurring the lines between several forms of production within Creed’s oeuvre). The audience became more and more animated as the evening wore on—not unusual at a concert, but in this case perhaps representative of the fact that, as with the other incarnations of Creed’s thoughts on display throughout the exhibition, the appeal of his songs lies in their cumulative effect. Both his music and his art can be digested quickly; it would take only slightly longer for someone to watch every video in ‘The Back Door’ than it would to sit through the entirety of the ‘Words and Music’ concert. In this way the concerts had a dual function as an alternate, performative survey exhibition that bore little resemblance to historical art-music comminglings, Fluxus events, or the relational stagings of the artist’s ’90s peers but were eminently classifiable among Creed’s own multifarious means of expression.