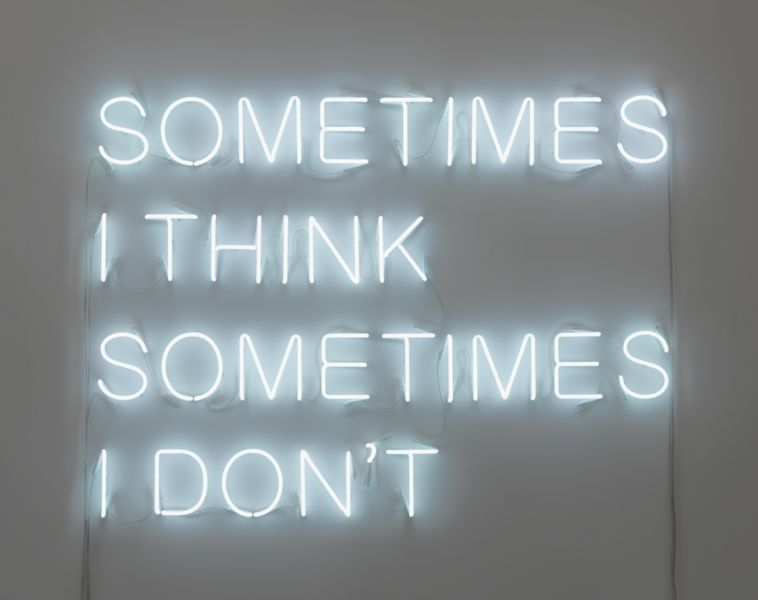 I CAN’T EXPLAIN AND I WON’T EVEN TRY. This polemically pointed statement, affixed to a wall in the Kunsthalle in big shiny black vinyl letters, read like a challenge to the critic preparing to review Stefan Brüggemann’s show.

This linguistic gesture of refusal – a 2008 work titled after its content – was only the beginning of a novel and utterly fascinating reflection on the current state of art. Brüggemann’s turns of phrase are invariably meant to be taken literally, but they also form a carefully defined set of statements that negate and comment on one another in the context created by the show—as they do in ‘Looks Conceptual,’ 1999; ‘To Be Political It Has to Look Nice,’ 2003; ‘Sometimes I Think. Sometimes I Don’t,’ 2001; and (This Is Not Supposed to Be Here), 2001. Brüggemann’s word compositions enunciate simple, direct statements only to retract them on either semantic or syntactical levels.
Thus, it comes as no surprise when we see mere scribblings, the minute gestures of crossing or scratching out, scratched on neon tubes – one black, one painted various colors. These appealing wall decorations use black light to embody the notion of deprivation as constantly present seduction. The ‘conceptual look,’ which, ironically, points to the importance of chic and spectacle in intellectual fashion trends, is inflated in Brüggemann’s piece ‘Conceptual Decoration,’ 2008, where these two words form the typographical ornament on wallpaper that entirely covers a room. The gallery’s most striking architectural elements—the wooden staircase with its intermediate landing, the curve above the entryway, and the three windows – here were left bare and carefully framed by the wallpaper, so that the space itself was exhibited as well. Brüggemann stages the work as a dynamic force that announces loud and clear, ‘Get me out of here!’ That is, out of a cynically jaded culture of quotation.
‘Black Box,’ 2008, which lent the show its title, appeared to hover in midair in the main room, raised above the parquet floor on a mirrored pedestal. Within the perfect blackness of its interior, we encounter the randomly generated flickering of alternating strobe lights and the white noise that sounds like a combination of all available radio stations. Information overdose and emptiness escalate to the point of unbearability. The light in the black box is a painful if timely metaphor for an autohypnotically oscillating mode of thought that seeks to elevate its own contradictions to the point of scandal. Even at the end of the postmodern era, such works have, as another black vinyl letter work from 2004 puts it, ‘No Content.’ But doesn’t the parenthetical claim not to have any content have at least that very claim as its content, along with a language in which to make the claim?
In the show’s last room, Brüggemann superimposed all the bits of writing displayed in the entire show. Together they could form the first character in the new alphabet of an unknown language. The blackness of this rewriting contains, among other things, the work ‘The Event of Writing May Be the Unevent of Reading,’ 1997. Perhaps writing is now taking the place of reading? Once read, this sentence, too, sets about the business of forgetting. In the blackness of all the overlapping words, language becomes the black box from which – without modernism’s explicit objectives – sentences never before read will begin to emerge, as in I’m Not Afraid of Repeating My Self, 2004. This critic would be glad if at least this one sentence might be deemed unreservedly worthy of trust.