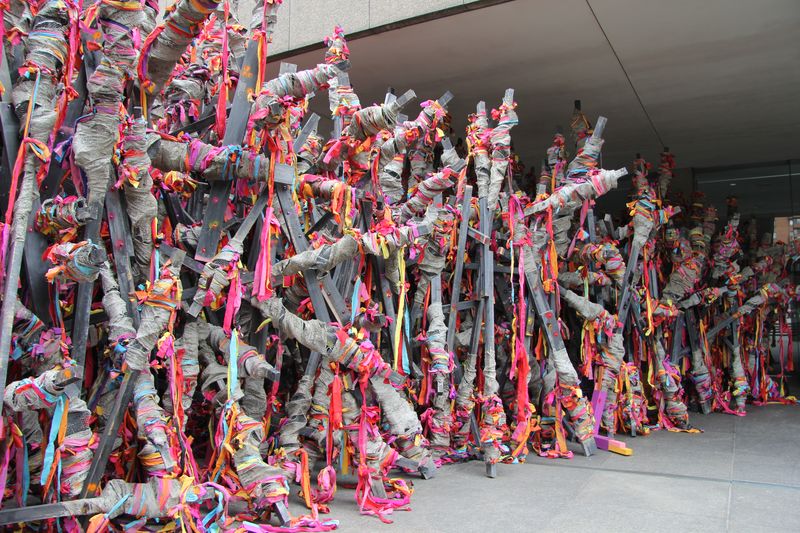 Phyllida Barlow, one of the UK’s most prolific sculptors, creates large-scale installations that involve a process of crushing, wrapping, stretching, stacking, and rolling. 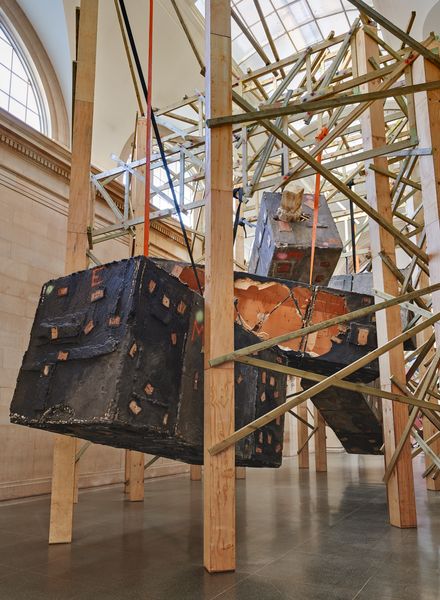 IC: ‘Tip’ (2013), installed at the Carnegie Museum of Art, used an amazing array of colors—grays, yellows, pinks—and appeared to be crawling, like a swarm, from the building’s interior out into the street. The work is set in rhythm with a nearby fountain and a tall gray tower block opposite.
PB: It is a swarm, and it’s also forest-like. ‘Tip’ was made of cement, timber, steel mesh, and lots of different fabrics. I love the mixture: it’s like really bad cooking, because the fabric and cement get all tangled. It took fourteen days to put up, and four assistants went ahead of me to mark out the territory. It was intense: at one point, we had to take a whole section down and do it again. That was difficult because it had spread and we needed to bring it back. The curator said, ‘You know we have to leave the Henry Moore and the fountains, as well as the rubbish bins.’ And I said, ‘Look, if we’re going to go into the street, we just embrace it all. It’s not a problem.’
When I get back from some of these installs, I can’t shed them because I’ve been directing every single upright, diagonal, and crosspiece needed, back and forth. It’s probably what performance feels like. One of the tragedies of these large works is the pressure of what to do with them. I’d just love an unused space where I could put ‘Tip’ up, look at it, and let it disintegrate in its own time. After all, it survived the Pittsburgh winter and had snow all over it.
IC: ‘dock’—which consisted of a group of separate, yet interrelated sculptures— was installed in Tate Britain’s Neoclassical Duveen Galleries. Did you feel challenged by the grandeur?
PB: The space itself became an encounter, like a walk or a hill that has to be climbed—just a fact of life. I knew I wanted to get up to the arching space at the top and free the floor, because that’s owned by the audience. I wasn’t intimidated by the adventure of it. I may have been intimidated by the logistical shenanigans it required, but I had an almost ludicrous indifference to the fact that things might be considered impossible.One of the conditions of the commission was to reference Tate Britain’s collection, which was my idea of heaven. To be able to look at all the works that had made such an impact on me—especially in relationship to the phenomena of invented form among a certain trajectory of sculpture from the 1930s to the ’50s—was fantastic. Invented form stood in complete contrast to the readymade, and I had always been fascinated by that intellectually, psychologically, and physically.