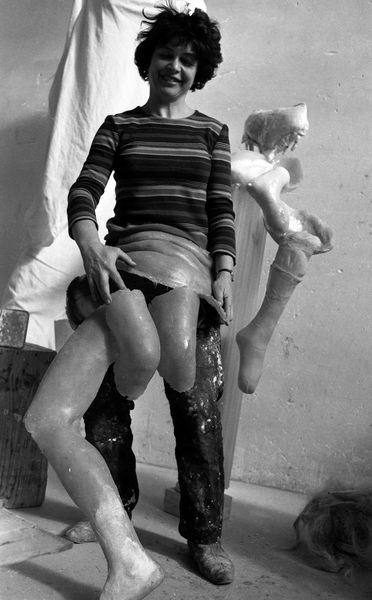 Hauser & Wirth is pleased to announce its worldwide representation of The Estate of Alina Szapocznikow in collaboration with Piotr Stanislawski, the artist’s son, and Galerie Loevenbruck, Paris.

Born in Poland to a Jewish family in 1926, Szapocznikow survived internment in concentration camps during the Holocaust as a teenager, going on in the immediate postwar period to classical art training. By the 1960s, she was radically re-conceptualizing sculpture as an intimate record not only of memory but also of her own body, and as a laboratory for avid material experimentation that presaged similar efforts by such artists as Louise Bourgeois, Eva Hesse, Kiki Smith, and Hannah Wilke. While her career spanned less than two decades (the artist died in 1973 at age 46), Szapocznikow is today a revered figure whose powerfully seductive, unsettling objects channel strains of Surrealism, Nouveau Réalisme, and Pop, while defying categorization.

Szapocznikow’s art, pioneering in its use of new or unconventional materials – from tinted polyester resin and polyeurethane foam, to everyday items such as pantyhose, newspaper clippings, and grass – invites meditation on what the artist once described as ‘a fleeting instant, a trivial instant…our terrestrial passage.’ Her strangely tinted casts of body parts, often transformed into everyday objects like lamps or ashtrays; her pliant and sexual polyurethane forms; and her sculptures incorporating photographs, clothing, or hardware, were produced during one of the most sociopolitically complex periods of the twentieth century. Szapocznikow’s responses – by turns ecstatic and abject, playful and disturbing, direct and elusive – and unapologetic expression of the female experience remain hauntingly relevant. 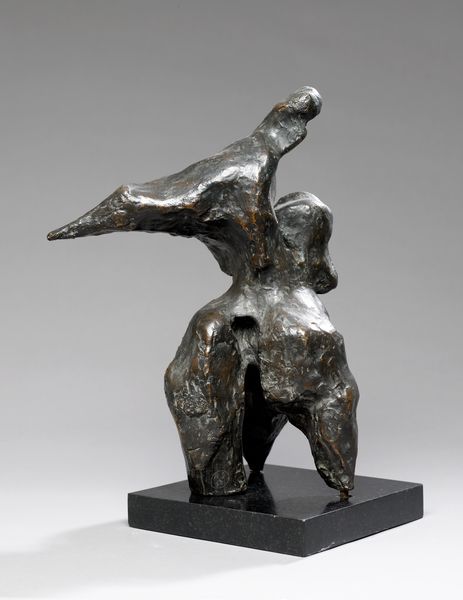 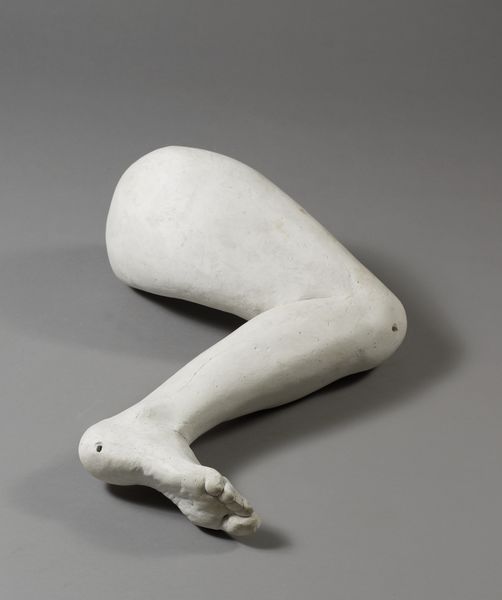 Alina Szapocznikow was born in 1926 in Kalisz, Poland, to a Jewish family. When Szapocznikow was a teenager, they were forced into the Jewish ghettos of Pabianice and Lodz, then into the concentration camps of Auschwitz, Bergen-Belsen, and Teresienstadt. After the war, Szapocznikow moved first to Prague and then Paris, studying sculpture at the École des Beaux Arts. In 1951, suffering from tuberculosis, she was forced to return to Poland, where she expanded her practice.
Achieving popularity in Communist Poland, Szapocznikow’s early abstractions were presented in numerous solo exhibitions and public installations. When the Polish government loosened controls over creative freedom following Stalin’s death in 1952, Szapocznikow jumped into representation. That shift is seen in ‘Ekshumowany (Exhumed)’ (1955), a sculpture depicting the mutilated form of a blindfolded young man and hinting at the uncanny figurative works that would follow.
In 1962, the artist experienced a breakthrough when she began to cast her own body in plaster (instead of relying on molds, as Eva Hesse would do in the United States a few years later). Her first work with this approach, ‘Noga (Leg)’ (1962), depicts the artist’s own right leg – a very public statement on the human corpus as vehicle of pleasure, liberation, illness, death, and decomposition. She spoke of this turn in her development: ‘Haunted by the increasingly academic nature of abstract art, and at the same time, partly out of my spirit of contradiction and partly perhaps out of some artistic exhibitionism, I made a cast of my own leg and an assemblage of casts of my face… Fortunately we believe that in art everything has been already, so nothing has been yet.’ From here, Szapocznikow focused her practice on live casting, using not only her own body but those of her son and friends. 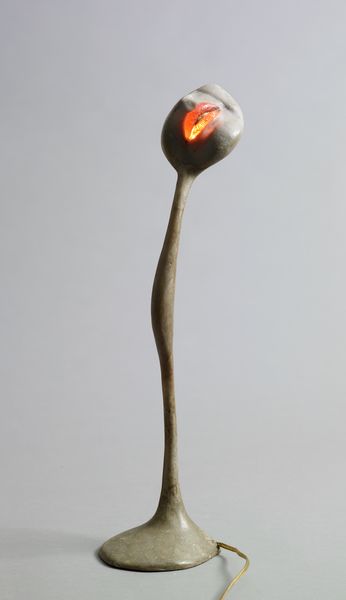 In the mid-1960s Szapocznikow moved back to Paris, where she was championed by Pierre Restany, ringleader of the Nouveau Réalisme movement. Over the ensuing decade, her sculptures evolved dramatically in form and material inventiveness. Working in resin, fiberglass, and metal, she created casts of her lips, breasts, and belly assembled into provocative, enigmatic objects. In ‘Lampe-bouche (Illuminated Lips)’ (1966), Szapocznikow transformed casts of her lips and lower face into functional lamps, a ‘modular manipulation’ of the relationship between the feminine, the utilitarian, and the mass consumption of women’s bodies.
Szapocznikow was diagnosed with breast cancer in 1969, a turn of events that shaped her later sculptural and photographic efforts. In a series of sculptures titled ‘Tumors,’ made of resin, gauze, crumpled newspapers, and photographs, the artist gave form to the anxiety and existential challenges of illness. In ‘Sein en chiffon vert (Fetysz II)’ (1970 – 1971), the cast of a breast is overwhelmed by a growth that expands beyond the recognizable body. In her work ‘Fotorzeźby’ (1971 – 2007), Szapocznikow photographed chewed pieces of gum: miniature sculptures made within her mouth that testify to her ceaseless efforts to index the human body.
Szapocznikow’s final works express her pointed desire to engage with something deeper and ineffable, physical and psychological, the symptoms of bodily experiences and the traces of what we leave behind. She wrote, ‘Despite everything, I persist in trying to fix in resin the traces of our body: I am convinced that of all the manifestations of the ephemeral, the human body is the most vulnerable, the only source of all joy, all suffering, and all truth.’ 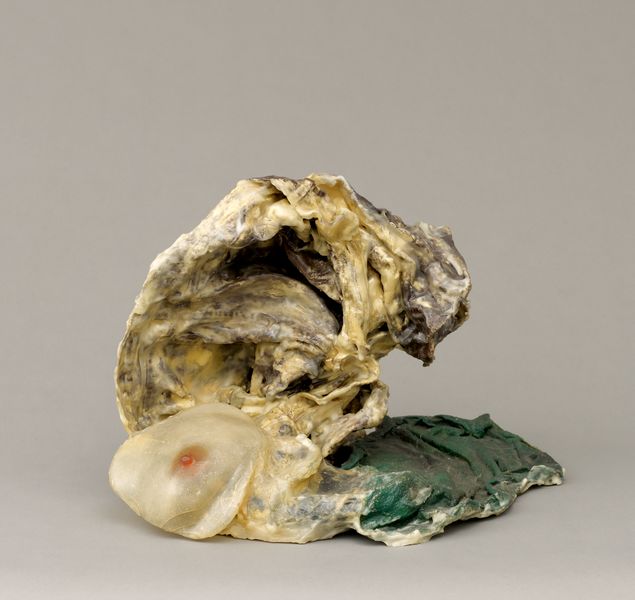 Szapocznikow represented Poland in the 1962 Venice Biennale. Immediately following her death in 1973, several exhibitions of her work were held in Warsaw and Lodz, Poland (curated by her first husband Ryszard Stanislawski), and Paris, France (Musée d’Art Moderne de la Ville de Paris). In 1998, her first major retrospective was held at the Zacheta National Gallery of Art in Warsaw, Poland, curated by Anda Rottenberg.
In recent years, Szapocznikow has been recognized by numerous major international exhibitions, including the first comprehensive retrospective that travelled to the Museum of Modern Art, New York NY; Hammer Museum, Los Angeles CA; WIELS Contemporary Art Centre, Brussels, Belgium; and the Wexner Center for the Arts (2011 – 2012), Columbus OH; as well as a major survey at the Centre Georges Pompidou (2013), Paris, France. Some major works have been presented at Documenta 12 and Documenta 14 last year in Athens, Greece and Kassel, Germany. Szapocznikow’s work is included in prestigious museum collections in the United States and Europe.
–
Hauser & Wirth will present its first exhibition of Szapocznikow’s work in New York City in Fall 2019.