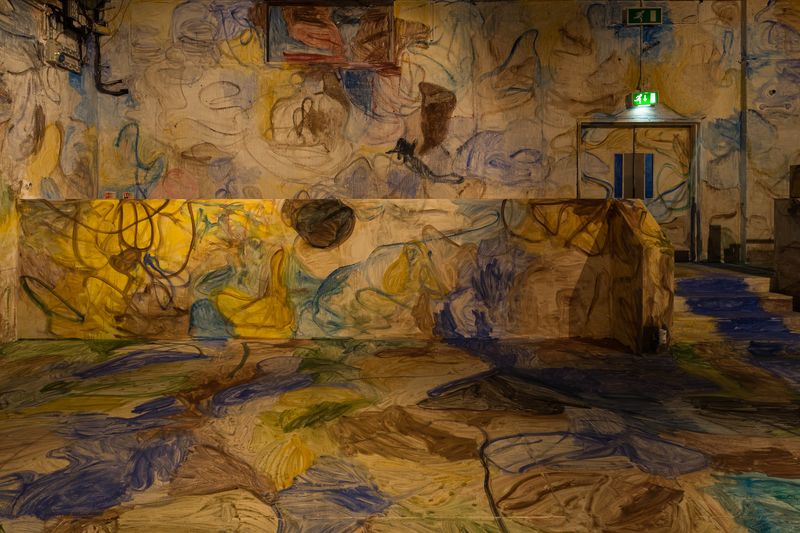 'Born in the province of Jilin, China, Zhang Enli creates paintings that reposition the prosaic that is found in the everyday. '

“Do not listen with the ears, listen with the mind . . . Emptiness is the fasting of the mind.”
–Zhuangzi 1
For his first UK commission of Space Painting—part of an ongoing series previously shown at Kochi-Muziris Biennale 2012, Sixth Curitiba Biennale 2011, and the Gwangju Biennale 2010, with similar iterations occurring in between—Zhang Enli stretches London’s Institute of Contemporary Art (ICA) theatre like a canvas and covers its walls with performative brush strokes that according to the artist evoke the city’s colours. 2
Born in the province of Jilin, China, Zhang Enli creates paintings that reposition the prosaic that is found in the everyday. Often depicting objects in his studio such as buckets, pans, light bulbs, or beds, Zhang Enli visually extracts the mundane aspects of the object and nudges it toward what Walter Benjamin describes as its aura. Through loose brushwork in thin washes of oil paint, Zhang Enli articulates the experience of the object, where each melancholic stroke seemingly characterizes its faint memories—suggestive, soft, and quickly fading. 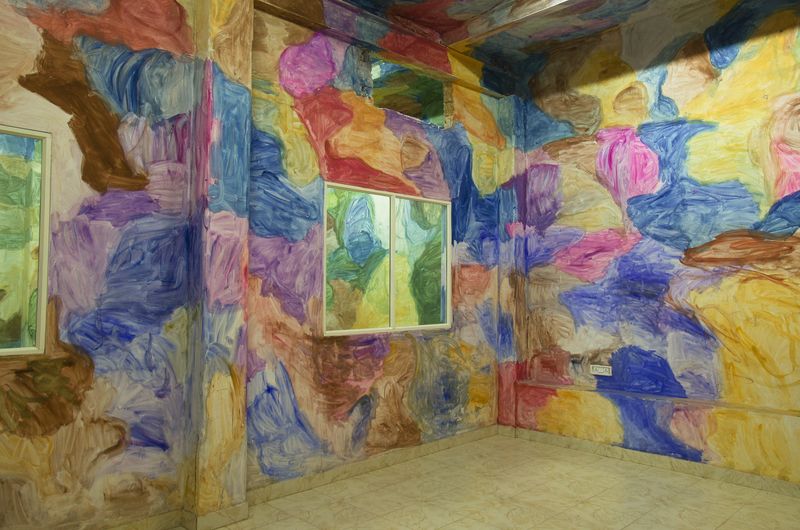 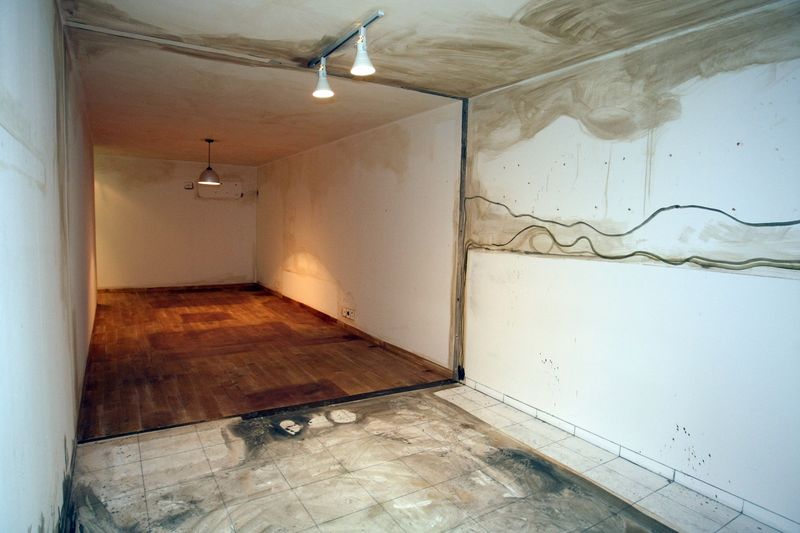 Although seemingly different at first glance from his previous paintings on canvas, Zhang Enli’s Space Painting continues to uncover the inherent memory of structures through painting. Here, he works within a physical space and repositions its architectural framework by mapping its surfaces in a full gestural performance of watercolour. The artist spent several days transforming the space, and the work’s durational aspect is translated to the viewer by the sheer volume of paint.
Alluding to the flurry of brush strokes that leaves the entirety of the space covered in a newly crafted skin, Zhang Enli describes the work as returning to “the most primitive state of painting.” 3 Its colours, running tangentially across the wall creates a cave-like atmosphere, the palette conjures up a prehistoric condition, a return to the wall as a recording device.
Upon entering the theatre, the viewer is caught in a whirlwind of colour and motion. By creating an immersive environment of paint, the viewer is bound by no formal structure or recognizable object. The ICA theatre is now the corpus of the museum. 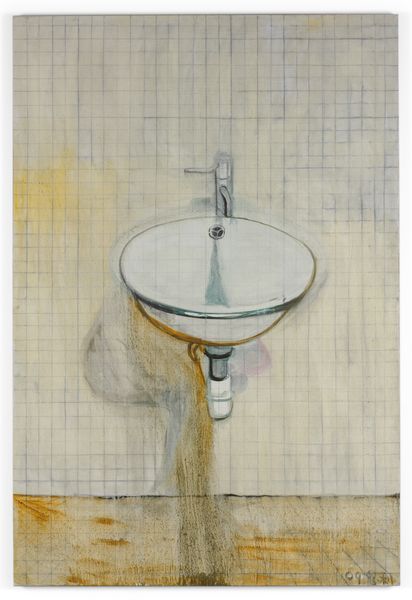 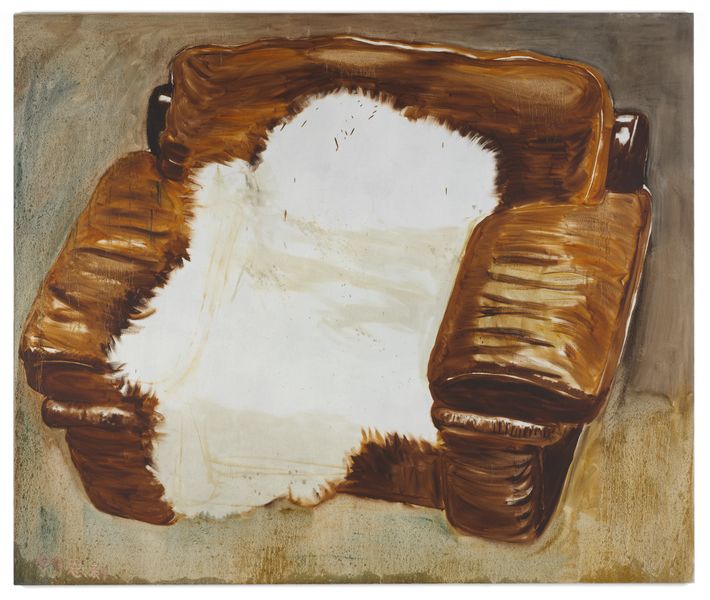 The viewer also enters into a visual conversation with the perspectival techniques used in painting. At first, Zhang Enli seems to decentre the viewer, repositioning the relation of his or her body to the painting, and he submerges the visual horizon into a sea of colour, confronting the traditional experience of viewing a painting. But further reflection upon semi-transparent layers of watercolour, Zhang Enli points to a network of continuities between the domains of architecture, sculpture, space, and painting. While Space Painting situates itself between painting and architecture, it is neither on canvas nor simply on the wall—Space Painting occupies an area that embraces both. This deviation into fields of architecture and painting also resonates with the artistic movements of the 1960s and 70s that saw sculpture move into an expanded field between architecture and land art.
Since Zhang Enli’s move from the small provincial town of Jilin City, in the north of China, to Shanghai, he has described himself as becoming more sensitive to his surroundings and the rapid development of cities and space through the context of their interiors. 4 His awareness of internal structural change is exemplified by an exploration of gallery interiors, a space that is constantly in flux due to the tempo of changing exhibitions.
With each narrative brushstroke, Zhang Enli constructs a visual and psychological stage for the protagonist to perform in. The theatrics of the work are framed by the distinctive stage lighting in the ICA theatre. Bathed in a warm glow, the visual impact of the work is not consistent; in some areas of the room it is luminous and in other areas mute and darkened. Countless movements are embedded in the application of paint that fills the room with an abstract expressionist rhythm that blends with an almost traditional Chinese ink wash painting style. Motion, action, and presence build the foundations that support the viewer’s experience. Through a performativity that builds upon the existing architecture of the theatre, the room is orchestrated and outlined for the viewer, thus creating an all-consuming structure that is activated upon entering the work. As in viewing a sculpture, the viewer must physically move in relation to the piece, maneuvering around its borders and edges to gather a fuller perspective. 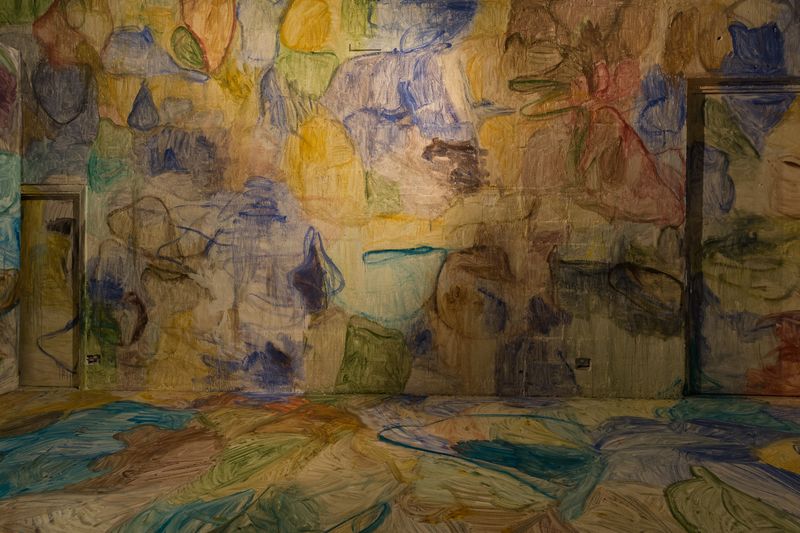 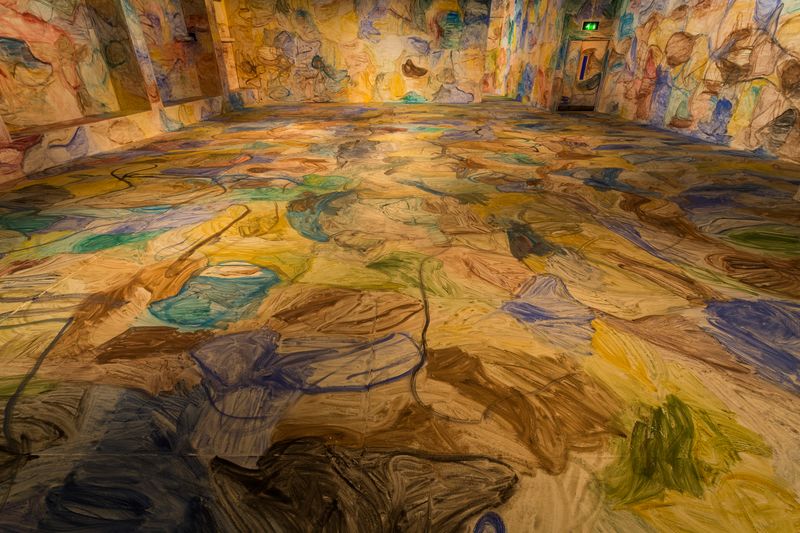 The material physicality of the space is drawn out by every brushstroke, and Zhang Enli exposes the constructed traces of the building’s architecture that is his canvas. Situated within the Institute of Contemporary Arts, which annually houses a number of contemporary art exhibitions, the work stands in a paradoxical relationship to its host space as it calls for a moment of stillness by the application of paint in a venue that is constantly reshaping its appearance in search of the contemporary. Thus a sense of impermanence comes into play, something the artist demonstrates keen awareness of when he states, “These works are painted over when the exhibition ends, and the exhibition only becomes a memory.” 5 Zhang Enli paints to mediate the passing of time in space, seizing the interior in the present and, for a moment, pausing the continuous cycle of the theatre’s programming.
Unlike Zhang Enli’s installation Circulez! Il n’y a rien à voir (2007), a collaboration with Moshekwa Langa, which saw a much more controlled mapping of an architectural space through the tracing of fictional elements of furniture through paint—electrical outlets, shelves, and other objects—Space Painting was created using a more open process, one that involved less restraint and concentrated focus, and it explores a different type of memory tracing. Moreover, Space Painting doesn’t seek to completely erase or overwrite the space—as is evident in the transparency of Zhang Enli’s thinly applied watercolour—whereas in Circulez! Il n’y a rien à voir, he highlights the shadowy outlines of the domestic objects that may have once occupied the space, providing the vestige of a human presence that lingers on the gallery walls. 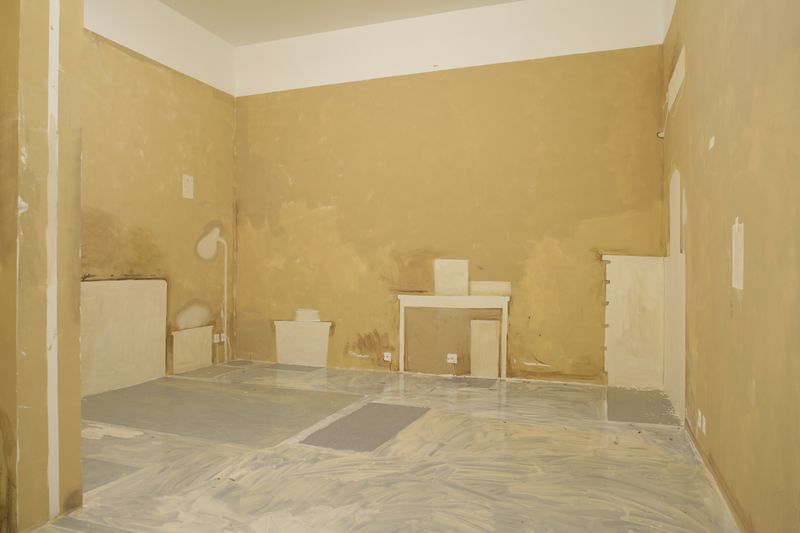 Zhang Enli draws the viewer’s attention to the subtle structural elements that indicate an experience composed by the leveling of materials used to construct space, in which concrete, wood, and plaster are now all equalized under the veil of the medium of paint. Contracted and expanded again, the depth of the theatre is altered with every step as the viewer moves through it. At times seemingly flattened, the once well-defined corners of walls are ironed out by the gravity of watercolour.
The concept of Space Painting allows the artist and viewer to explore the space together. The artist may not be physically present, but his hand is. Remnants of Zhang Enli’s presence in the process of making this work remain for the viewer to visually follow. An image-based mapping of his motions through the space, with each mark left by the artist acting as a secondary infrastructure, supports both the sub-narrative of the theatre and a self-determined sovereignty.
This investigation of presence and absence also corresponds to past works such as A Corner of Studio (2011) or Art Museum (2006), where the underlying relationship between space and canvas is still haunted by the distinct lack of human presence. In these works the viewer’s presence is often absorbed into Zhang Enli’s intimate spaces of appreciation for the everyday. Unlike Space Painting, these canvases are mounted onto gallery walls, where we reexamine their relationship to the interior of the gallery, an act that seems to also double as a reflexive antidote to the spaces depicted. This mise en abyme-like experience is one that is further expanded upon within Space Painting. By contemplating the absence of any human presence in such works, one becomes susceptible to an expression that is space-oriented, in which space is given its own independence and autonomy, one that is beyond the perception of the viewer. Zhang Enli seems to identify elements of transformation in space by articulating the interior as an object in itself, an act that was also mentioned in Ikon Gallery’s 2009 press release: ‘The object becomes paint and the process of painting mediates the artist’s communion with the object. It is no longer a question of a ‘surrounding’ world; the object and the observer are the same.’ 6 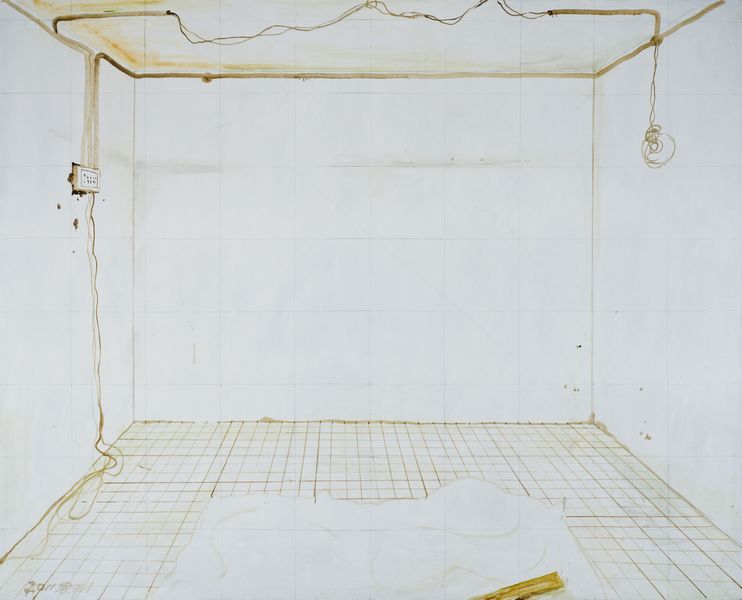 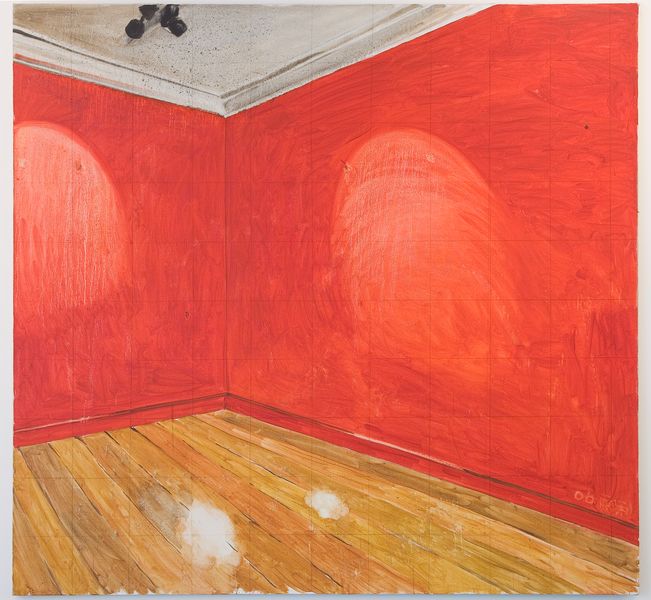 Space Painting creates a static space to contemplate the mass development of urban infrastructure, in both China and abroad. As cities overdevelop, and with each skyscraper that is constructed, a sense of the past is erased. Bringing this sense of loss to mind, Zhang Enli offers a comment that is temporary and will eventually be blacked out and painted over. Space Painting also reminds the viewer that it is not just a building’s exterior that is altered during urban renewal, but also its interior. Through experiencing Zhang Enli’s constructed interior, the audience is made aware of the rapid change and transformation that an institution such as the ICA goes through several times a year. Pointing to interiors as a measure of change, Zhang Enli utilizes a medium that remains constant, using painting to start a conversation about permanence and impermanence—not only of the interior but of painting itself. In our age of rapid image making and the sharing of software, where apps and social platforms are increasingly changing the way we interact with our physical interiors, one wonders how the passive reception of images affects a new generation of gallery goers as they interact with painting. Space Painting is a pictorial proposition for the perseverance of the medium of paint in the expanding field of contemporary art. In a time where the motionless image can lose its way in the labyrinth of the new media, permanence is perhaps an idea to be tested in a space that relies on an impermanent experience. Only when immersed in the environment that Zhang Enli has created is the viewer aware that development and change is constant, and, like memories, exhibitions are there to be experienced, then wiped clean again with the passing of the new.