Art on the Underground

To celebrate its 150th anniversary of the London Underground, Mark Wallinger created a major new commission for Art on the Underground, a multi-part work on a huge scale installed in every one of the Tube’s 270 stations. A unique opportunity to explore the potential of the Underground as a whole, and forging a poetic link with the Tube’s rich history of graphic language, Wallinger's work sits comfortably alongside the two of its major design icons, the roundel and Harry Beck’s Tube map, and yet stands out as a new symbol marking the Tube’s 150th year.

Wallinger explores a diverse range of subjects in his practice, from the historic and mythic to the biographical and contemporary, resulting in works that are layered with rich cultural references for the viewer to discover. The Underground has been the inspiration and location for two of his previous works, ‘Angel’ 1997 and ‘When Parallel Lines Meet at Infinity’ 1998/2001, filmed on the Circle line.

The rumble of trains was a reassuring presence in Wallinger’s childhood, with the Central line running close by his family home in Chigwell, Essex. The Tube provided him with a connection from the countryside to the complexities and possibilities of the metropolis. This personal relationship with the Underground has informed his interest in public transport and fuelled a fascination with the idea of being ‘transported’ in an imaginative or spiritual sense. This idea gave rise to the ancient symbol that lies at the heart of this commission: the labyrinth, which represents this idea of the spiritual journey in many different traditions across the globe. An example of a significant labyrinth from the 13th century can be seen today on the floor of Chartres Cathedral, where visitors are invited to walk its circuitous path as a form of pilgrimage. For Wallinger, the labyrinth is a fitting analogy for the millions of journeys that are made across the Tube network every day. 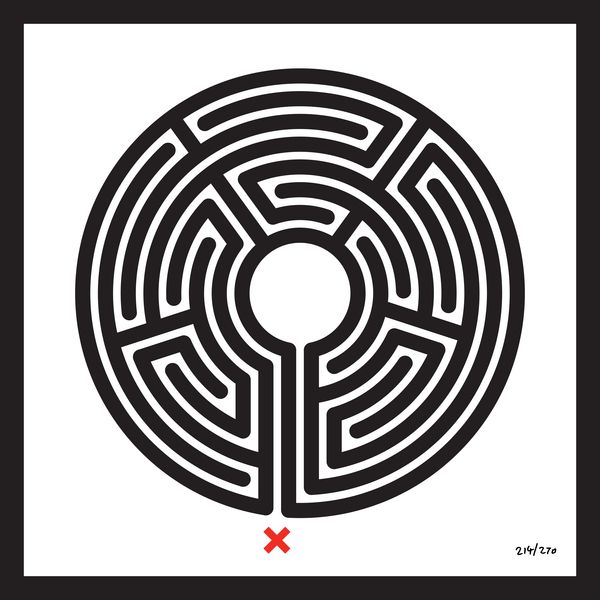 Wallinger created 270 individual artworks, one for each station on the network, each one bearing its own unique circular labyrinth, but with a graphic language common to all. Rendered in bold black, white and red graphics, the artworks are produced in vitreous enamel, a material used for signs throughout London Underground, including the Tube’s roundel logo, whose circular nature the labyrinth design also echoes. Positioned at the entrance of each labyrinth is a red X. This simple mark, drawing on the language of maps, is a cue to enter the pathway. The tactile quality of the artwork’s surface invites the viewer to trace the route with a finger, and to understand the labyrinth as a single meandering path into the centre and back out again – a route reminiscent of the Tube traveller’s journey.

One World is a new work by Mark Wallinger co-commissioned by Liverpool Biennial and 14-18 NOW, the UK’s arts...