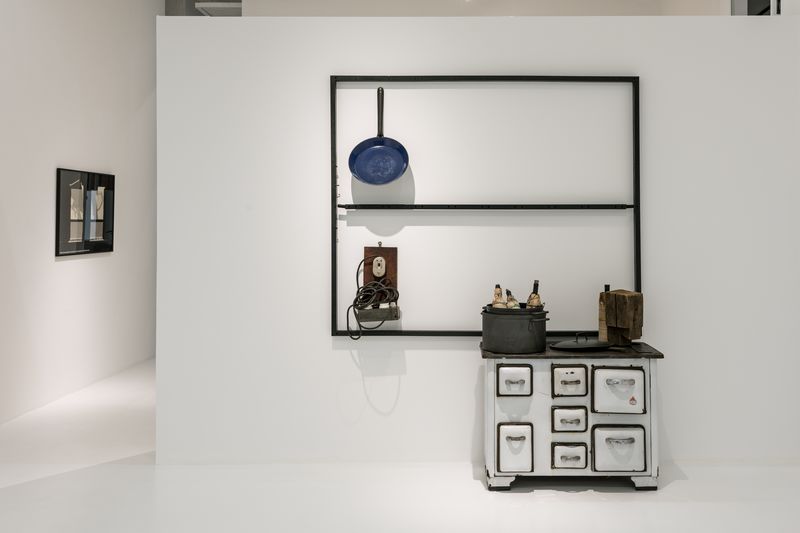 These days, when time-honoured ideas and ideals are under attack by a resurgent right wing, it seems timely to return to the work of Fabio Mauri, the arte povera artist whose life and work was marked by the rise of fascism in Italy.

This thoughtful presentation at Bergamin & Gomide includes a selection of 25 works drawn largely from his series ‘Senza Arte (Artless)’ and ‘Photo Finish/ Carboncini’, executed between 1970 and his death in 2009, leaving me eager to see a full-scale retrospective of his work.
Mauri grew up in the midst of World War II and the horrors of the Holocaust, and later witnessed the rise of liberal democracy in Italy, driven by consumer capitalism and the media. The Mauri family owned one of the most important publishing houses in Italy, and the young artist became close with thinkers of the postwar Italian avant-garde, such as Italo Calvino, Umberto Eco, Pier Paolo Pasolini and Janis Kounellis. Their intellectual influence undergirds the way his work questions ideological biases and various political issues as they are (re)produced by the media.
As if taking note from Mauri’s literary peers, the exhibition begins with text: ‘On the Liberty’ (1990), a beautiful, wall-mounted electric wire sculpture, spells out the titular statement and lights a blue bulb attached to a stand in its centre, seemingly in reference to the Statue of Liberty’s torch. The sign faces the spare assemblage ‘Ventilatore (Senza Arte)’ (1990), a monochromatic white painting upon which an electric fan has been mounted. Blowing air away from the canvas, the fan ironically draws the viewer into the tongue-in-cheek ‘artlessness’ referenced in the work’s title. This ironic use of language, explicit or implied, extends to two works on the gallery floor: large doormats with the phrases ‘Forse l’arte non è autonoma’ (Maybe art is not autonomous, both 2009) and ‘Noneronuovo’ (I was not new) cut from their surface.
Unlike Pop artists of the 1960s, Mauri wasn’t interested in the mechanical reproduction of images or the iconography of mass media culture. Rather than shiny new commodities or consumer technology, his assemblages are cobbled together from everyday domestic objects, arranged in loosely narrative tableaux. Mauri’s installation ‘Cucina o La questione tedesca (Senza Arte)’ (‘Kitchen or the German Question (Artless)’) (1990), an old working stove which lightly heats pans and bottles of wine below a metal frame mounted around a frying pan and an old electric power box, appears along the far wall of the gallery – just past the doormats, as if beyond the threshold of a home.
Ten of Mauri’s ‘Foto Finish’ (1976) works hang in an adjacent gallery: sheets of photosensitive paper, exposed until they have blackened, and collaged with real, mundane objects like teacups or thread reels. Their formal similarity to his wall-mounted assemblages negates the photographic properties of their grounds, even as they imitate the format of photograms. São Paulo has a large population of Italian immigrants, many of whom fled poverty and fascism between the two World Wars. Brazil’s own experience with dictatorship and the recent ascendance of the country’s right wing made this demographic link to Mauri’s work feel even more poignant – striking a surprisingly powerful, if perhaps unintended, chord.