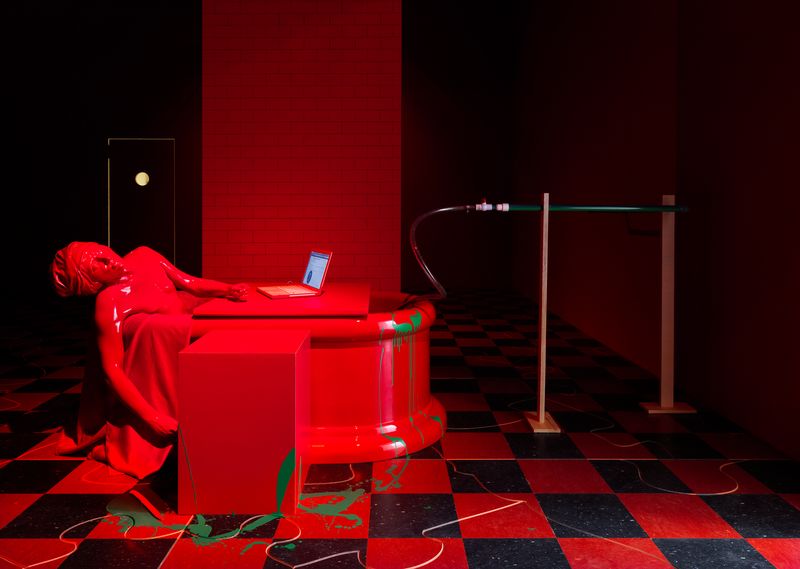 I am from a country that has had a painting tradition since the first half of the fifteenth century, a country that was home to Vincent van Gogh for a couple of years, and where Jacques-Louis David’s 'Marat assassiné' has been permanently housed in the Royal Museum of Fine Arts (in Brussels) since 1893.

I am from a country where, in 1994, Jason Rhoades created his marvellous work entitled ‘PIG’ (Piece in Ghent), a complex installation that makes direct reference to ‘Adoration of the Mystic Lamb’ (1432) by the van Eyck brothers, and where, in the seventies, an artist proposed blowing up the Royal Museum of Fine Arts in Antwerp in the name of art. So this country’s mental-cultural geography includes a number of elements that cannot leave you indifferent: the history of a genre (Hans Memling, Peter Paul Rubens, James Ensor, René Magritte, Luc Tuymans etc.), the presence of the work by Jacques-Louis David, and the link with your friend and pupil Jason Rhoades.
You are from a country where the myth of Hollywood is a reality, where endless landscapes dictate a tendency and appetite for monumentality to its artists, and where art history is shaped by the grand gesture. Not the intimate smallness of Jean Fautrier, but by the explosive directness of James Rosenquist. It is probably a country that always approaches history like current events – or perhaps the reverse – and which acts on the basis of a faith in the possibility of repeatedly reinventing everything again. And it is this that you do over and over, but from a critical distance, remote from the logic and mechanisms of the art business, acting within the defining perimeter and laws of your studio and personal experiences. I think I read somewhere that, in your view, today’s artists too often start out from a similar education and experiences when creating their oeuvre. May I thus presume that you are saying that artists are defined more by elements external to their work? In your case the studio is a refuge, a safe haven and a control room where your fascination with painting and your playful admiration for a number of masters and/or their work (Marcel Duchamp, Georges Seurat, Pablo Picasso, Barnett Newman, to name just a few) leads to an absurdist and intelligent iconoclasm fuelled by your own life story. How else would you have arrived at a work in which Edgar Degas’s ‘petite danseuse’ is subjected to a remake? Images interest you when they form a problem so the process only becomes interesting when it is unpredictable. A small aesthetic temptation is enough to make short work of it. 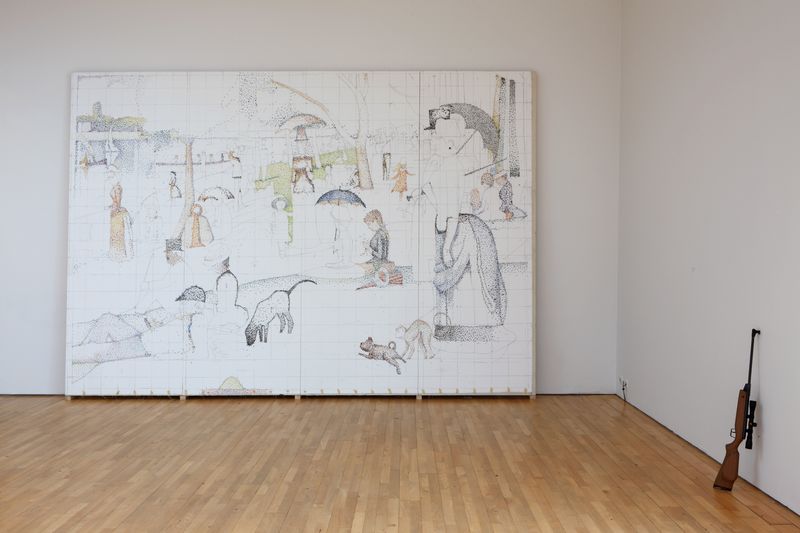 As an artist, unlike many others, you soon dropped successful tried and tested artistic formulas. You see it as the artist’s responsibility to shift the boundary, both mentally and spatially, on the basis of an analysis of a medium and an artistic practice. Each work, and the time-consuming business of creating it, reminds me of the steps of a scientific element, as if it were an experiment, a planned and calculated moment limited in time and space. With shrewdness and a tendency to irony you have appropriated several concepts that resided in the idiom of painting in the second half of the twentieth century: abstraction, gesturality, chance, the destructive gesture. At the same time, on the basis of your contacts with artists in the sixties and seventies, you also absorbed the no-nonsense logic of minimal and conceptual art. The result is not conceptual painting, but rather a radical and consistent thinking through and methodical execution of a number of principles. The artwork’s importance as an object is here secondary to the viewer’s experience of it and the slow process of its production by the artist.
The scale of your works and their possibly unintended spectacular nature may mean your work might be described as a form of elitist populism. Its immediate comprehensibility and accessibility give it a broad appeal, while the remaking of several works from the art history canon give it a hermetic aspect with a critical, ironic, and sometimes scabrous undertone. One way or another, I am reminded of the 1928, ‘Manifesto Antropófago’ by the Brazilian poet Oswald de Andrade. You do not cannibalize any other culture, but you do cannibalize the myth of the artist genius, the art history of the twentieth century, and the machismo of the art world, using them to make a playful and critical statement that combines the gesturality of Pollock, the indifference of Duchamp and the mechanics of Jean Tinguely into a form of “conceptual baroque” in which monumentality is measured on the scale of the artist and not on that of history.
Philippe Van Cauteren
Artistic Director
S.M.A.K Municipal Museum of Contemporary Art
Blainville, September 25, 2012