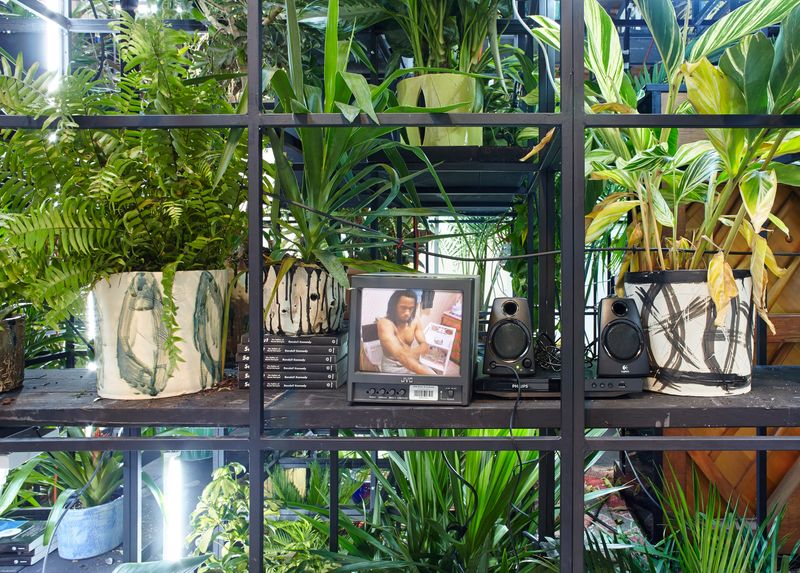 Although Johnson debuted with three classically composed portrait photographs of a homeless black man he met in his hometown, Chicago, today he is lauded for more conceptual work, expressed in a vast range of media, including painting, sculpture, installation, performance and video. Yet while his materials and his vocabulary are widely variegated, Johnson’s concerns have stayed consistent, says Thelma Golden, now the Studio Museum’s director and chief curator, who selected him for the show. At the core you always see ‘a deep engagement with the history of conceptual art,’ Golden says, ‘but also the history of black people.’ And the work always ‘operates on an emotional level and an intellectual level at once.’
By now, Johnson, 40, has also shown in galleries, museums and biennials around the world—a major exhibition at Moscow’s Garage Museum just closed. And he was recently named to the Solomon R. Guggenheim Foundation’s board of trustees, the first artist appointed since Hilla Rebay, the Guggenheim Museum’s founding director and curator. 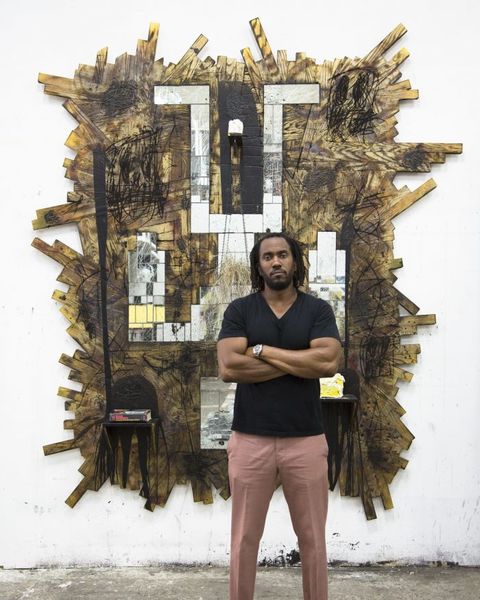 Among Johnson’s more remarkable traits is his humor and humility – as is immediately clear on a steamy summer day in his Bushwick studio. He prowls nervously around an architectural model in a corner, the maquette for his show at Hauser & Wirth, his first New York gallery exhibition in five years. Looking at the model, he discusses the gallery’s intimidating size. ‘I’ve never made a maquette this large before,’ he says, noting its soaring ceilings and famously column-free rooms. ‘The openness of the space forces you to work as an architect.’ Then he laughs, adding that the show will likely be about ‘the success or failure of Rashid Johnson’ in that arena, too.
Yet failure seems unlikely, for if anything has marked Johnson’s career so far, it has been his willingness to embrace new challenges, and his ability to use them all as springboards for artistic growth. So, it’s no surprise to see that he is using this show to present three new series, as well as the largest sculptural installation he has ever presented in this country. (The largest anywhere was at the Garage.) 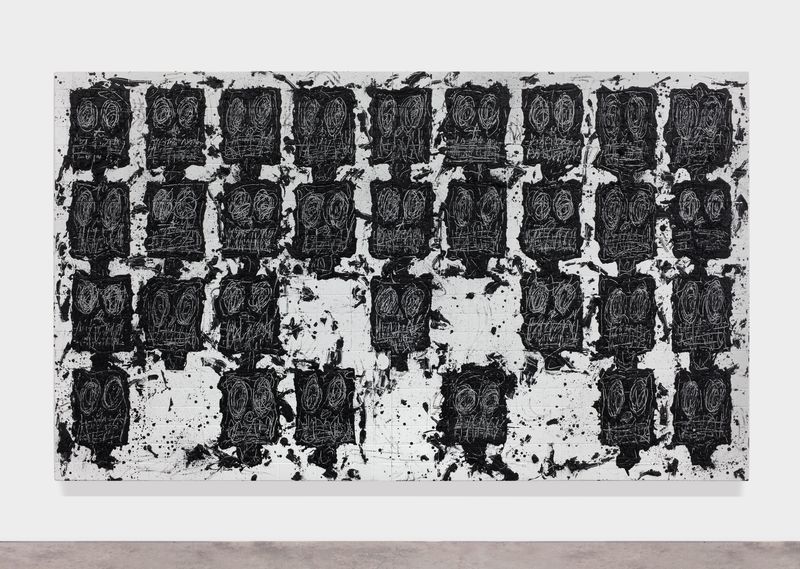 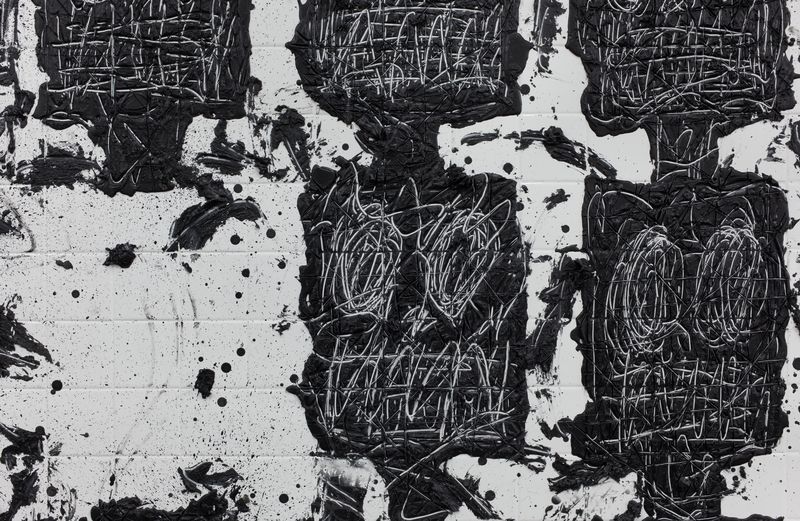 The exhibition, which runs through October 22, opens with six works from ‘Anxious Audiences’ – paintings covered with grids of scrawled, apprehensive faces that grew out of the ‘Anxious Men’ series Johnson debuted at New York’s Drawing Center last fall. ‘I think of them almost as audiences to the bizarre political theater we’ve been witnessing,’ he says, suggesting not only the Presidential race but also the many horrifying deaths that ripped through the news last summer, including the Orlando and Nice massacres, and a string of unarmed black men shot by police.
These works lead to Escapist Collages, paintings on colored tile layered with photo decals of tropical imagery, as if suggesting a way out. ‘Constant escape is an underlying narrative’ in this series, Johnson says, pointing out other decals of Harriet Tubman and the Afrofuturist musician Sun Ra, who claimed he came from Saturn. ‘I don’t think anyone is without wanting to escape, even Donald Trump supporters.’
Next come the ‘Falling Men’ wall assemblages that transform Johnson’s signature materials of white tile, oak floorboards, mirror shards and black soap and wax splatters into upside-down stick figures who seem to fall through space. ‘There’s a quietness to these that’s almost a respite.’ Johnson says. ‘Like the gift of death Derrida talks about.’ Even in that busy studio, with assistants sawing and hammering in the background, the robotic figure with a potted fern planted where its pubic hair should be, conveys a weirdly visceral sensation.
At the show’s heart stands Antoine’s Organ, Johnson’s first installation to incorporate live music. Inside its plant-laden grid is a piano and a musician, Antoine Baldwin, who plays his own jazz several hours a day. No doubt it’s because of this live soundtrack – added to the overarching themes of escape, redemption and soaring new heights – that the show is called ‘Fly Away,’ after the 1929 gospel standard ‘I’ll Fly Away.’ 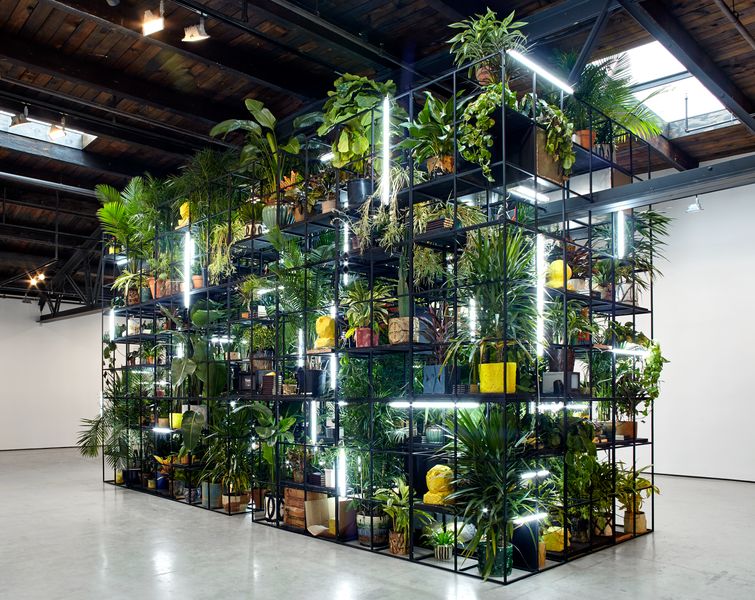 ‘Rashid is someone who is always experimenting in the studio and trying to innovate,’ says Cristopher Canizares, senior director at Hauser & Wirth. ‘But I can’t think of a moment when he has debuted so many new series and taken such innovative strides all at one time.’ Yet another such moment may soon be on the way: this show is a warm-up for Johnson’s upcoming museum exhibition, opening in February at the Kemper Museum of Contemporary Art in Kansas City, Missouri.
Oddly enough, this massive show found its roots in Johnson’s Anxious Men show at the Drawing Center last fall, one of the more intimate exhibitions of his career. The series at its heart was sparked when curator Claire Gibson, who ‘had admired Rashid’s work for a long time,’ as she recalls, asked him to consider ‘the use of the drawn gesture that unified all the different bodies of his work.’ Johnson was soon marking individual faces into the black soap and wax he uses to make murky black abstractions. (He calls this mixture ‘cosmic slop,’ after the famous Funkadelic song.)
Yet as anxiety began mounting in the world, with ‘global immigration issues, attacks on America, and attacks within America by police on young black men,’ Johnson says, the notion of exploring just his own anxiety seemed inadequate, and he began drawing multiple anxious faces instead. ‘I was coming to the realization that my anxiety was not mine exclusively,’ he says. ‘It also had something to do with fatherhood.’
His son, Julius, just turned five, and Johnson is impassioned when speaking of the strong influence that he and his wife, artist Sheree Hovsepian, have had on his life and work. ‘When something happens to me, it happens to my family – to the human family,’ he says. ‘Thinking more responsibly about all of us—that happens with maturity.’ 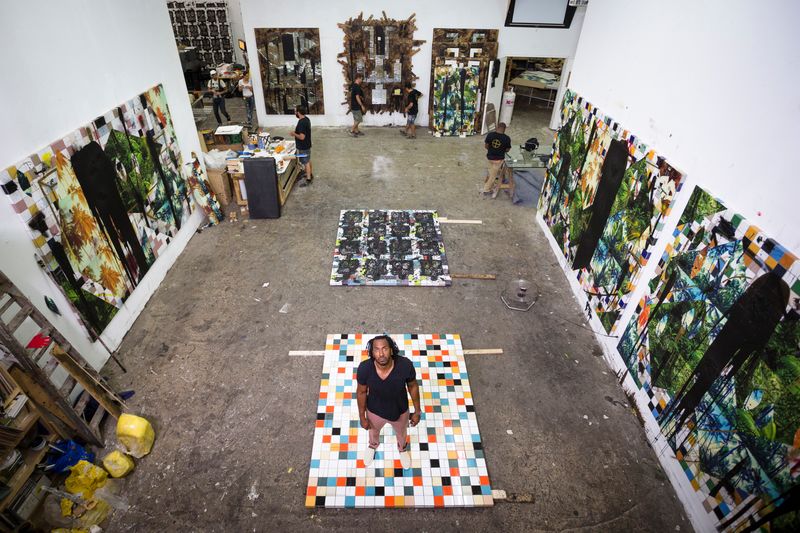