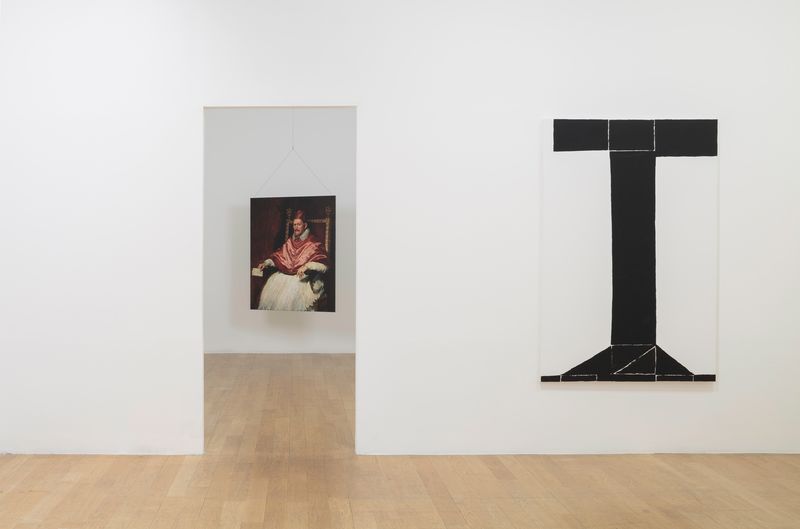 “When you say you made these new paintings with body parts, we are talking about your hands, aren’t we?”
“Yeah, thankfully,” Mark Wallinger laughs. “We’re safe there.”
Wallinger is a big bear of a man who once dressed up in a bear suit to wander around the Neue Nationalgalerie in Berlin and filmed the result. It is a Friday morning in London and he and I are sitting in Soho House (he’s a member) talking about the state of the world – parlous, we agree – and the (short) history of two-handed synchronous painting.
The artist has a new exhibition opening in Scotland. His first in fact. It’s so big that it takes two galleries – the DCA in Dundee and the Fruitmarket in Edinburgh – to host it. His hands-on (literally) canvases – he calls them “id Paintings” – will be at the heart of both.
They’re huge canvases that resemble giant Rorsach blots. As such, they rather demand you read into them, I suspect. Some people have seen animals in their inky swirls. Me, I tell him, I can see aliens. What can he see? “I’ve seen all kinds of things like that,” Wallinger agrees.
Is Freud in there? “I guess he is. I’ve been in analysis for two years and I’ve given up drink for nearly two years, so things like that aren’t… irrelevant.” 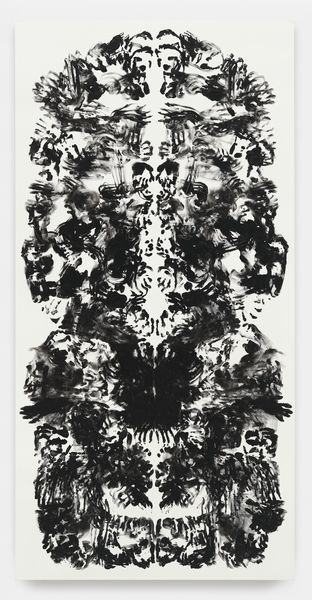 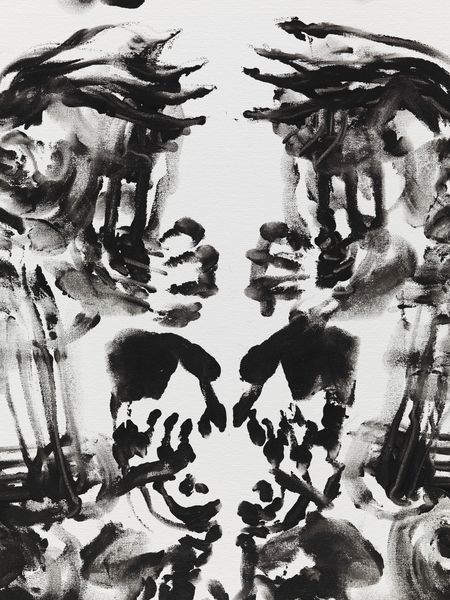 Wallinger is a man who laughs easily and who takes the playfulness of his work seriously. The DCA and Fruitmarket shows still feature predominantly new or recent work, although there will be the odd greatest hit on display, too. The video work Sleeper (the one he puts the bear suit on for) is getting its first showing in the UK since Wallinger picked up the Turner Prize back in 2007.
Wallinger was born in Chigwell, Essex, in 1959 (he is a quarter-Scots on his mother’s side. His gran was born in Stirling). He grew up always wanting to be an artist and his career stretches back before the days of BritArt; back to a time when the idea of an “artistic career” was kind of ridiculous.
He was slightly too old to be part of the Sensation generation, but he still managed to catch that rising wave they surfed, starting off as a painter and then following his creative impulses into sculpture and video work and now back to painting again.
Scotland apart, he has exhibited all over Europe since the 1980s. His installation State Britain – a painstaking recreation of Brian Haw’s peace camp in Parliament Square where the campaigner lived for five years between 2001 and 2006 while protesting against US and UK actions in Afghanistan and Iraq – won Wallinger the Turner Prize at the second time of asking in 2007. He had also been nominated in 1995, but Damien Hirst won it that year with Mother and Child Divided, a cow and calf mounted in formaldehyde. Wallinger’s A Real Work of Art, a real life racehorse was an also-ran.
He’s always been a political artist working from a leftist perspective. That’s not easy in 2017. Mark, I have to ask, what is the purpose of art in times of crisis? “Well, to try and be effective. At the moment everyone needs to pull together really. I don’t know. I look at it and think Donald Trump’s going to implode.”
“I keep meaning to look up an old episode of The Twilight Zone where a town’s under the tyranny of a six-year-old boy. It’s a bit like that really.”
Perhaps one of his most lauded works was Ecce Homo. In 1999 he created a marble resin life-sized statue of Jesus Christ. It became the first sculpture to be mounted on the empty plinth in Trafalgar Square. That, he says now, was probably the most instantaneous idea he ever had. 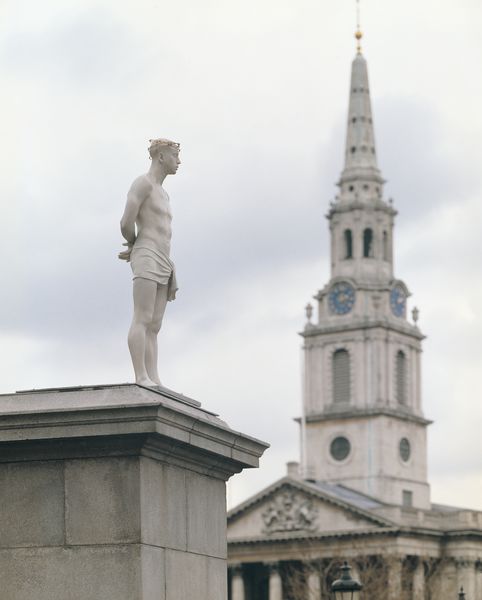 “At the end of the phone call I sort of knew what I was going to do. The fact that Christ and Christianity was the one thing it seemed one couldn’t mention coming up to the Millennium was quite strange.”
The statue is in storage although it should make a reappearance this year. Not in Scotland though. Sometimes, he says, reflecting on artwork he did years ago feels like looking back though the wrong end of the telescope. “if you till like them there’s a mixture of euphoria and melancholy.”
The id Paintings, though, are too new to prompt any mourning of the passing of time. They are a continuation of Wallinger’s ongoing fascination with self-portraiture, one that began 10 years ago and has brought him full circle back to painting.
“I had moved into a new studio which was a very tall factory space. I ordered some tall stretchers that were made so they were twice my height and my span in width.”
“I was interested to see what would happen if I pushed it to really epic proportions. And towards the end I started using my hands to paint and then I made one that was entirely hand prints using both hands.”
“And then finally the penny dropped. I’m a bit slow on the uptake. It took me until I was 50 until I started using my name Mark as a pun.”
The idea was to have his two hands do the same thing on opposite sides of the canvas; in effect to create a mirror image. “The first three I made in one day and they were just feeling about, stepping back and seeing the record of the traces of this thing. It was kind of blind performance. Then I flipped the thing the other way so something that was already kind of intriguing and strange was estranged further by being upside down.”
“I suppose the other thing about the paintings was I had to psych myself up. They had to be very instantaneous, not least because it was black acrylic paint which dries rapidly and I didn’t allow myself to paint wet over dry. So things had to be resolved in one session.” 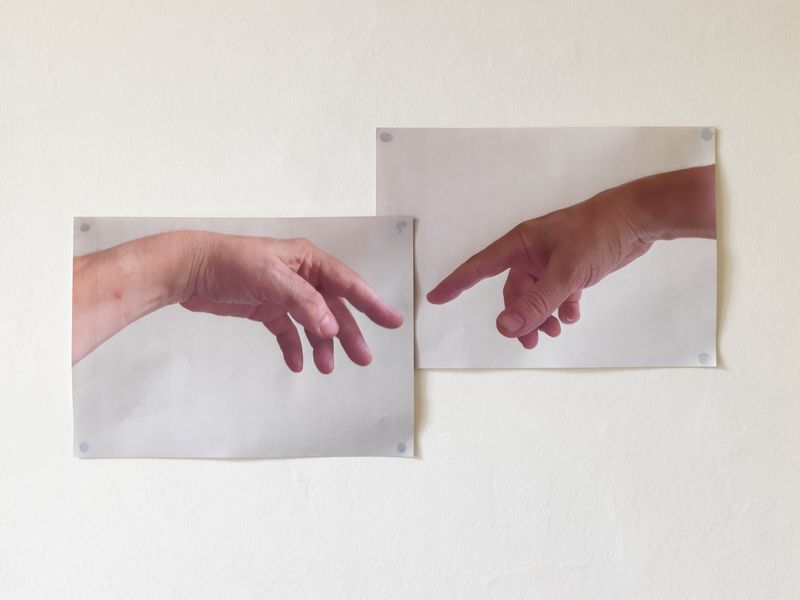 Other new works include iPhone inspired works such as Ego – a take on Michelangelo’s The Creation of Adam (“I hope that was doubly ironic about hubris. Michelangelo had the hubris to think that in the first place.”) Then there is Orrery, which came about because he was looking after his ill mother and to get wi-fi had to drive down to the local library. That journey meant he had to go around the same roundabout every day. At one point he started filming the tree in the middle of the roundabout on every journey. “The only sophistication beyond that was doing it with Blu-tack so I could keep my eyes on the road. I kept a steady 14 miles an hour, which is quite a niggly speed.”
Were there any beeped horns? “Oh, yeah. Expletives, yeah.”
If anything, he says, such works are the result of him learning “to hang onto half an idea until it meets the other half. Patience. That’s it, really. And a sort of imperative for making.” That’s the Protestant work ethic in him, he admits. “There was a Picasso quote I came across the other day which I quite like. He said he believed in inspiration but you have to be working at the time.”
He is now in his late fifties and there has been some stocktaking going on of late. Hence his decision to stop drinking. What was behind that anyway? “I needed to really.”
Is he still a betting man? “Do you know, I’m a big absteemer these days.”
“What was the last bet I had? I had a friend who has a horse which had an each-way chance but aside from that… I still love horses and I still go from time to time and I have friends in that world. I used to bet every day, which is not a good thing.”
Did he usually win? “No. No one does.”
In life at least. In art, Wallinger is still worth a punt. 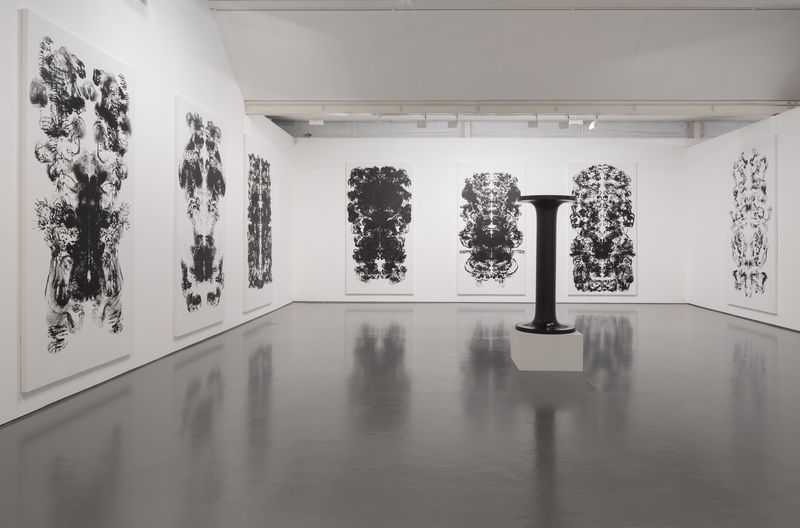