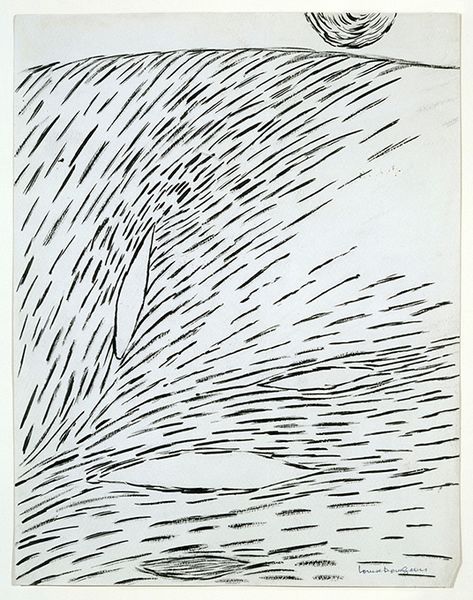 ‘Between the space of nothing and the action of something, everything is possible’
– Douglas Dreishpoon

Beginning 2 February 2017, Hauser & Wirth will present ‘Nothing and Everything: Seven Artists, 1947 – 1962,’ an exhibition dedicated to the synergistic relationship that existed between visual artists and composers during the years following World War II. Curated by Douglas Dreishpoon, Chief Curator Emeritus at the Albright-Knox Art Gallery, the exhibition features works by Louise Bourgeois, John Cage, Morton Feldman, Philip Guston, Franz Kline, Joan Mitchell, and David Smith – mavericks who pushed the boundaries of their respective mediums to new realms of abstraction. Paintings, sculptures, prints, and drawings will be contextualized by a selection of musical scores and ephemera.

On view through 1 April, ‘Nothing and Everything’ is accompanied by a fully-illustrated catalogue featuring an essay by Dr Dreishpoon. The gallery will host additional public programs during the course of the exhibition.

‘Nothing and Everything’ examines a particularly fertile period in the history of American art through the work of seven artists who, magnetized by a shared ethos and the spirit of their times, socialized together, exhibited collaboratively, and supported one another’s ideas. The cultural context and synesthetic affinities that linked these seven individuals is the exhibition’s central premise.

Upon entering the gallery, visitors first encounter a recording of the American avant-garde composer, music theorist, and philosopher John Cage reading his ‘Lecture on Nothing’ (in a rare recording from the 1980s). Delivered in Cage’s distinctive manner, the talk has no clear narrative; words and phrases are punctuated with moments of silence. Some of Cage’s first compositions in the 1930s were written for percussion. By the 1940s he was widely recognized for his groundbreaking use of the concepts of randomness. In 1952, he unveiled his seminal composition ‘4’33”’ – silent for its entirety, with musicians instructed to not play their instruments for the duration of the piece. For the uninitiated listeners then in attendance at the Maverick Concert Hall in Woodstock, New York, the silence drew their attention to the naturally occuring sounds of the environment. The exhibition also includes excerpts from ‘Radio Happening I’ (recorded live at the WBAI radio studio in New York on 9 July 1966), a work from the ‘Radio Happenings’ series of conversations between Cage and American composer Morton Feldman, recorded over a period of six months between July 1966 and January 1967. The pair discuss the role of the artist, what it means to be a composer, and the debates around abstraction.

After a serendipitous encounter at Carnegie Hall in January 1950, Cage and Feldman became good friends. Through Cage, Feldman was introduced to a cadre of visual artists, who included Jackson Pollock, Philip Guston, Willem de Kooning, and Franz Kline – artists who would inspire him through their pursuit of a new abstraction. The exhibition’s title echoes the crux of a conversation shared between Feldman and Cage during a studio visit with Philip Guston. Together the three would exchange ideas about the concept of abstraction, in both art and life:

‘Cage and Feldman were in my studio, in 1951 or 1952,’ Guston recalled, ‘and I had done what were probably the sparest pictures of all… I think one painting just had a few colored spots on it, and lots of erasures. Cage was very ecstatic about it, and he said, ‘My God! Isn’t it marvelous that one can paint a picture about nothing!’ and Feldman turned to him and said, ‘But John, it’s about everything!’

Here, Cage and Feldman pose the central question: Can ‘nothing’ be a material thing? Is it an existential condition? ‘Nothing,’ Feldman declared in an article on Guston, ‘is not a strange alternative in art. We are continually faced with it while working. In actual life, this experience hardly exists.’

Philip Guston started experimenting with abstraction in the late 1940s following a decade of figurative and personal allegories. By the 1950s, both he and Feldman were arriving at a philosophical turning point in their work. While Guston consciously began to pare down his painting compositions, Feldman adopted a highly experimental and minimalist approach to his soundscapes. Guston’s ‘White Painting I’ (1950) and ‘Untitled’ (ca. 1951) show the artist limiting his palette, using fewer colors and feather-like brushstrokes surrounded by ambiguous space.

Feldman, who would have seen these works, was creating compositions of a similar nature, distinctively more reduced, quiet, and meditative. Feldman developed a graphic score for compositions with titles like ‘Projections’ and ‘Intersections’, which allowed performers to choose their own pitches and rhythms. The exhibition includes a specially designed listening room where the recordings of a selection of Cage and Feldman’s compositions from 1950 to 1962 can be heard on loop. This includes Cage’s ‘Aria’ (1958), ‘Music of Changes’ (1952), and Feldman’s ‘Intersection 4’ (1953), ‘Extension 4’ (1953), and ‘For Franz Kline’ (1962).

‘Forging IX’ (1955), part of a series comprising 10 sculptures by David Smith, is one of his most reductive works. Reaching tall but lacking in any substantial mass, the work is engulfed by space, transmitting a sense of vulnerability. In contrast, the artist’s series of egg ink paintings signal a more poetic gestural exploration. Horizontal streaks of ink glide across the paper dispersing fragments of space. These works by Smith seem to share effects with Cage’s spontaneous compositions, with their playfully random injections of gaps and silences.

The spatial orientation of sculpture was also an important aspect for Louise Bourgeois. For her space was a parallel to silence. In 1983, the artist remarked, ‘Silence is a subject that interests me tremendously. The length of the silence, the depth of the silence, the irony of the silence, the timing of the silence. The hostility of the silence. The shininess and love of the silence.’ Bourgeois was no stranger to the palpability of silence with which she associated her own feelings of alienation and loneliness, experienced in the early years living in America. The lone column ‘Breasted Woman’ (1949 – 1950) highlights the white walls of the space it inhabits and the absence that surrounds it, intensifying its own isolation. ‘The Blind Leading the Blind’ (1947 – 1949) further shows how space can be divided but also united, how it can, in the words of curator Douglas Dreishpoon, ‘blind, but also enlighten.’ A selection of Bourgeois’s works on paper from the 1950s gestures toward an environment whose quiet unfamiliarity suggests a lack of human presence.

During this period, Joan Mitchell and Franz Kline deployed as gestural, at times minimal aesthetic. Feldman became closely acquainted with both artists during evenings at such preferred destinations as New York venues The Club and the Cedar Tavern. Initially adopting a post-Cubist style, Mitchell’s paintings evolved into dynamic compositions as seen in ‘Rose Cottage’ (1953), and her ‘Untitled’ works from 1954 and 1958 – 1959. Here, she applies rigorous brushwork incorporating dabs and strokes, mixing warm and cool colors, and applying heavy, dry, and drips of paint that synthesize multiple forms: light and dark, space and density, gravity and lightness.

The exhibition concludes with a selection of works by Franz Kline. A latecomer to Abstract Expressionism, Kline worked in a figural style into the late 1940s. He then began to create small abstract brush drawings by applyingthick, black strokes in ink or oil to pages from a telephone book. Encouraged by his close friend Willem de Kooning, Kline enlarged these drawings using a Bell-Opticon projector. Large-scale ideogrammes pinioned by painterly white and black counterthrusts resulted; the leap toward abstraction had been made.

‘Herald’ (1953 – 1954) is an early, defining example of Kline’s signature black-and-white paintings. An open rectangle, its explosive black contours, rendered by a housepainter’s brush, cut into a white field. Like a Japanese ensö, the rectangle’s composition is at once dynamic and arrested, playing with the tension between movement and the completion of movement. The form of the square or rectangle was extremely important to Kline. The artist pushes the form of the rectangle beyond pure geometry, imbuing it with an emotional valence that provokes a sort of seeking on the part of the viewer.

The presentation of the work of these seven artists provides a literal and metaphorical commentary on the impending impact of abstraction through their explorations of silence and sound, space and the materiality of the absence of space – explorations that continue in art today. 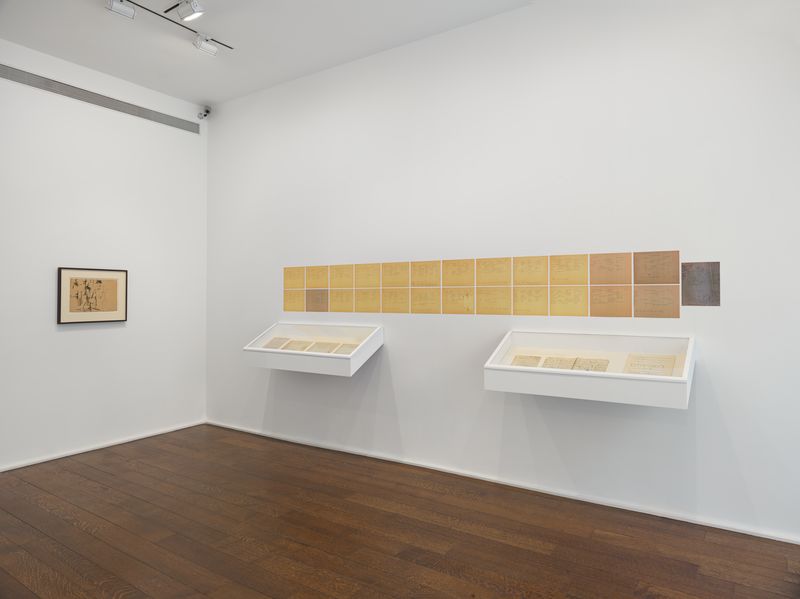 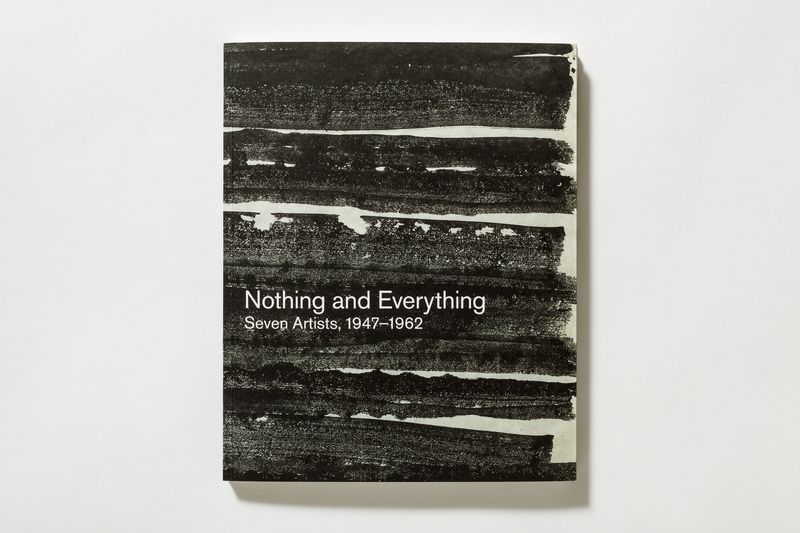