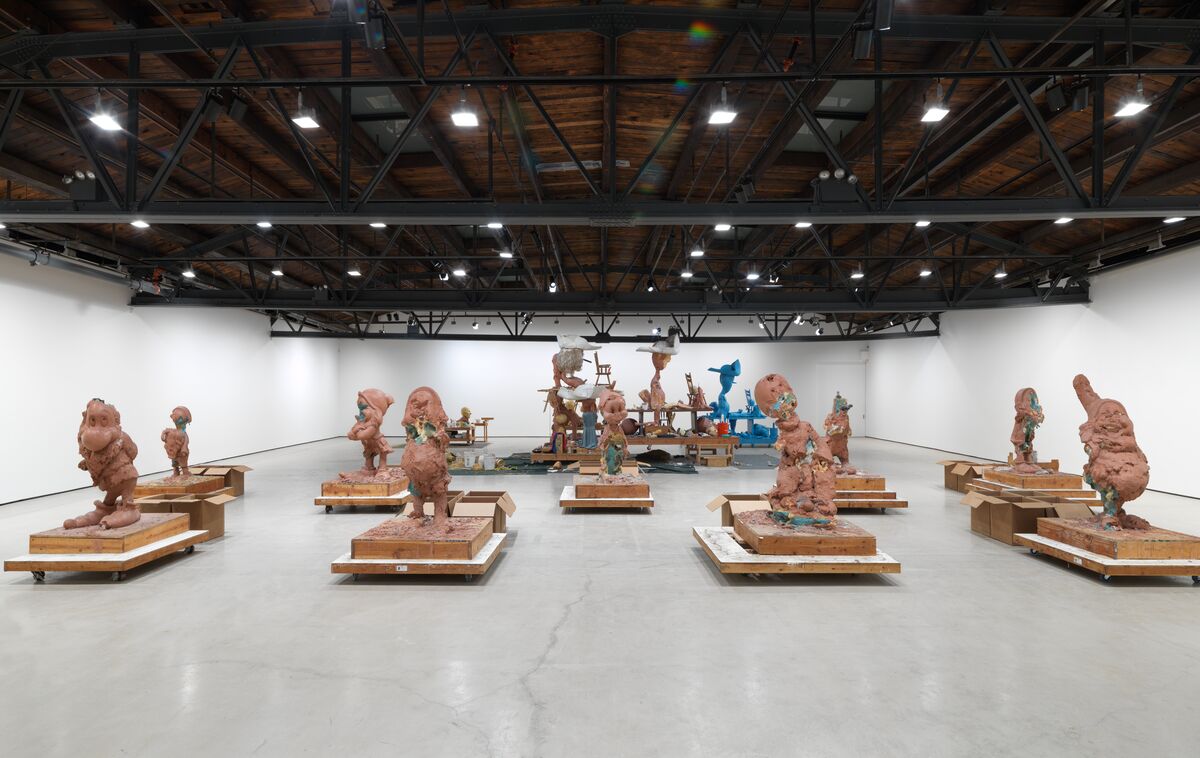 Beginning 10 November 2016, Hauser & Wirth is pleased to present ‘Raw Spinoffs Continuations’, an exhibition of sculptures by Paul McCarthy. Featuring works from the artist’s most important projects of the last 15 years, including ‘WS’, ‘Caribbean Pirates’, and ‘Pig Island’, ‘Raw Spinoffs Continuations’ celebrates McCarthy’s distinctive process in the making and un-making of an artwork.

About the Exhibition
Hauser & Wirth will present a new series by McCarthy of bronze ‘White Snow Dwarfs’ alongside the original clay sculptures from which they were cast. These most recent works in the artist’s major ongoing project ‘White Snow’ vividly illustrate the roles that repetition and variation play in his oeuvre. McCarthy’s 2013 video installation at the Park Avenue Armory ‘White Snow’ is the modern interpretation of Walt Disney’s beloved 1937 animated classic film ‘Snow White and the Seven Dwarfs’, in which the original stories’ archetypal narratives are pitched against real human drives and desires.

McCarthy’s original sculpted clay dwarves were altered and distorted variations of Disney’s Seven Dwarfs. Even in their original iterations, McCarthy’s clay figures possessed additional layers of abstraction as a result of having been sculpted and re-sculpted via the artist’s frantic and impulsive performative process. They were subsequently cast in silicone (2010 – 2012), and although those richly colored versions are not included in ‘Raw Spinoffs Continuations’, they are integral manifestations of the journey that has produced this remarkable body of work to date. The process of silicone casting abstracted the original clay sculptures further, so that a second casting in bronze have acquired a new degree of rawness and pathos. Presented en masse, McCarthy’s bronze and clay dwarves reveal the artist‘s engagement with the life cycles of materials and together elicit meditations upon time, mortality, and the role of art in a realm of thought beyond the limits of flesh.

Also on view in the exhibition will be the large-scale installation ‘Chop Chop, Chopper, Amputation’ (2013 – 2016) from McCarthy’s Caribbean Pirates series. In this darkly carnivalesque work, a pair of disjoined clay figures wearing huge pirate hats, loom over a landscape littered with broken body casts, chairs, wooden platforms, sex toys, buckets, mugs, among other detritus, all punctuated by dollops of viscous, deep yellow polyurethane foam. Inspired by the Disneyland attraction ‘Pirates of the Caribbean’, the Caribbean Pirates project began in 2001 as a collaboration between Paul McCarthy and his son Damon McCarthy; it has produced a prodigious body of work, including sculptures, performance, and film. ‘Chop Chop, Chopper, Amputation’ is the merging of a pair of individual large-scale works in the series, based on two drawings by McCarthy – ‘Chopper’ and ‘Amputation’ – that were originally intended to stand independently from one another. Envisioned as a pirate boat, the installation rests on carpets that stand in for water filled with debris: the trash that has been thrown overboard by the vessel’s unruly occupants.

The exhibition will be completed by ‘Paula Jones’ (2005 – 2008) and ‘Puppet’ (2005 – 2008), both born out of McCarthy’s mammoth, celebrated opus ‘Pig Island’ (2005 – 2010). Combining political figures and elements drawn from pop culture, ‘Pig Island’ evolved over seven years in the artist’s studio, ultimately becoming a surreal compilation of themes that have coursed through McCarthy’s work for decades. Originally conceptualized as an island of robotic pirates and pigs, drawing inspiration from the earlier ‘Piccadilly Circus’ (2003), ‘Pig Island’ is populated by pirates, pigs, likenesses of George W. Bush and Angelina Jolie, an assortment of Disney characters, and the artist himself, all carousing in a state of reckless abandon. Originally part of this dark bacchanal, the sculptures ‘Puppet’ and ‘Paula Jones’ feature caricatures of former President George W. Bush and pot-bellied pigs engaged in sexual acts.

On view through 14 January 2017, ‘Raw Spinoffs Continuations’ will be the final exhibition at Hauser & Wirth’s West 18th Street space. The gallery’s new temporary home is 548 West 22nd Street, adjacent to the site of its future freestanding building at 542 West 22nd Street. 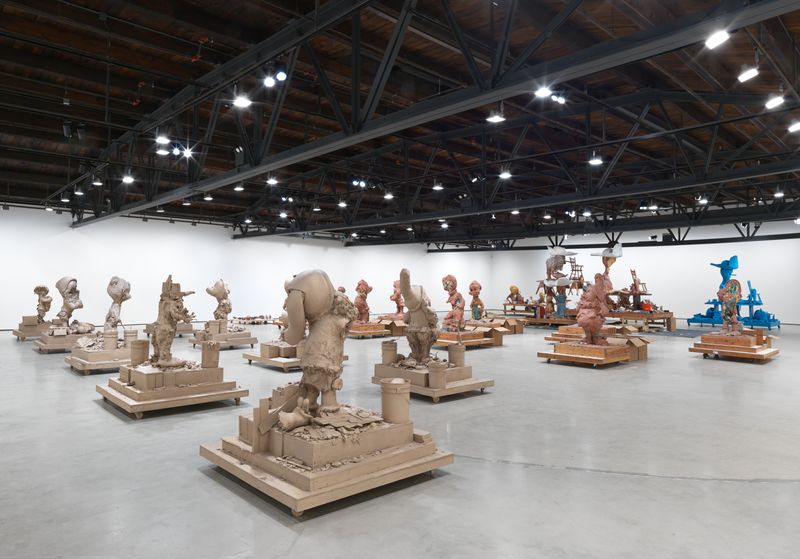 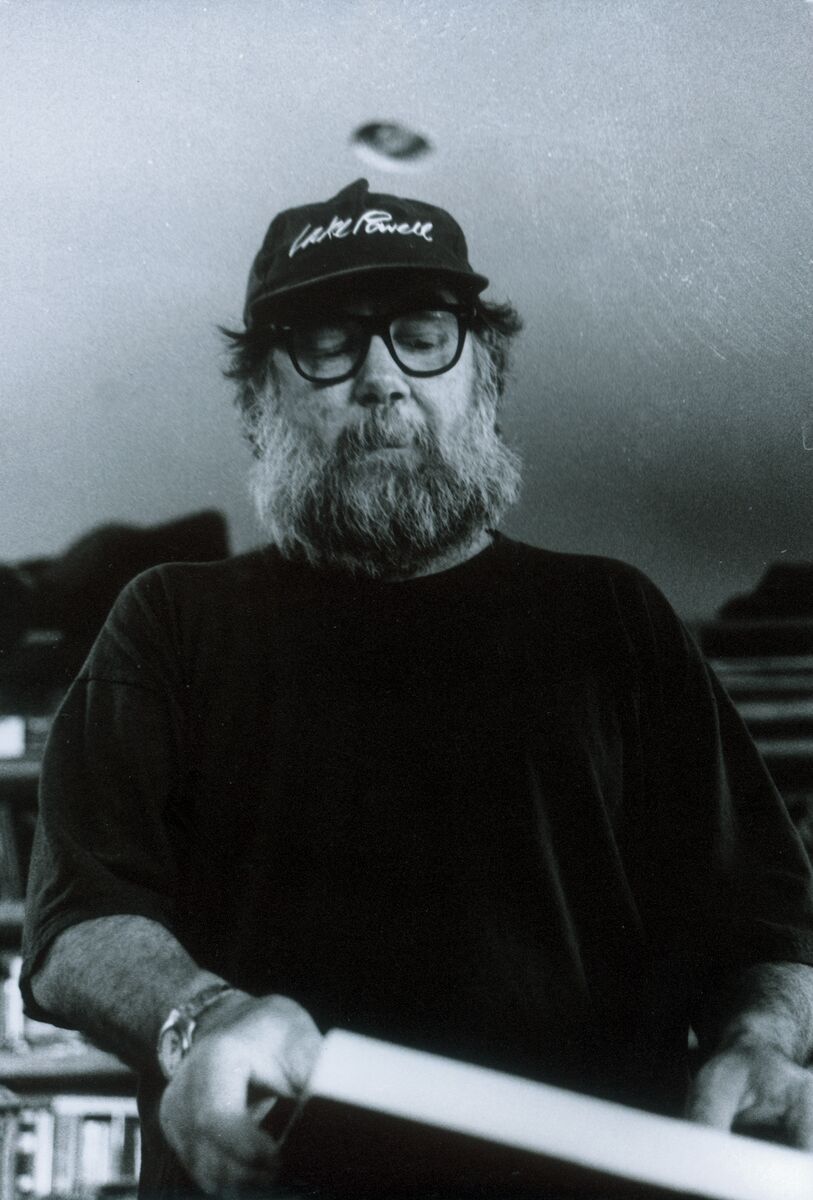 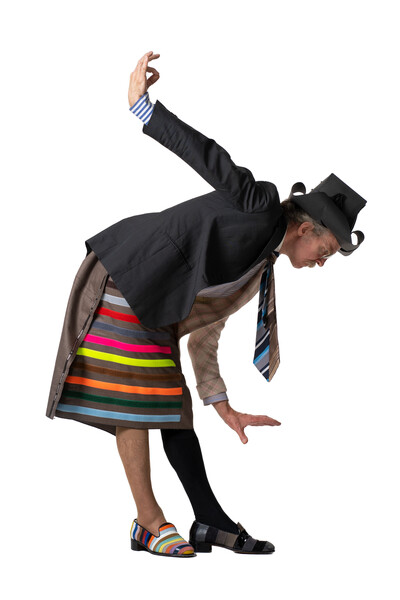 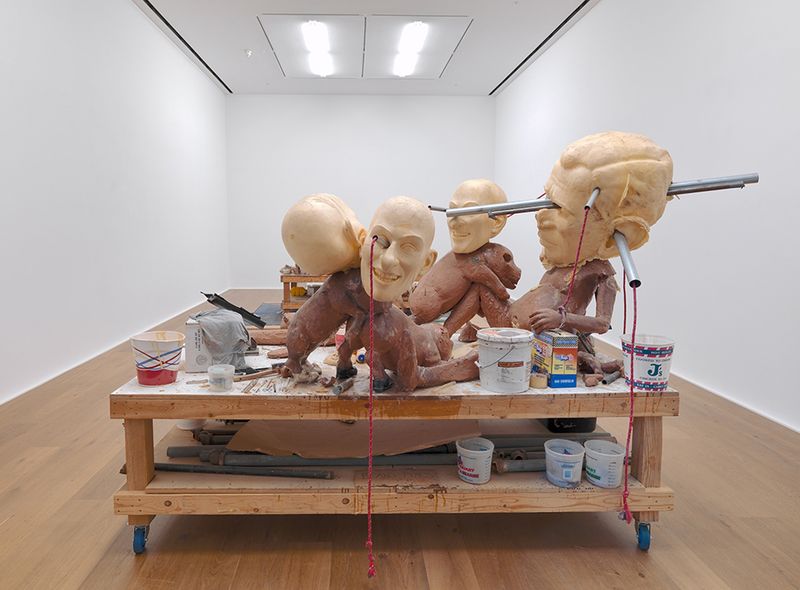 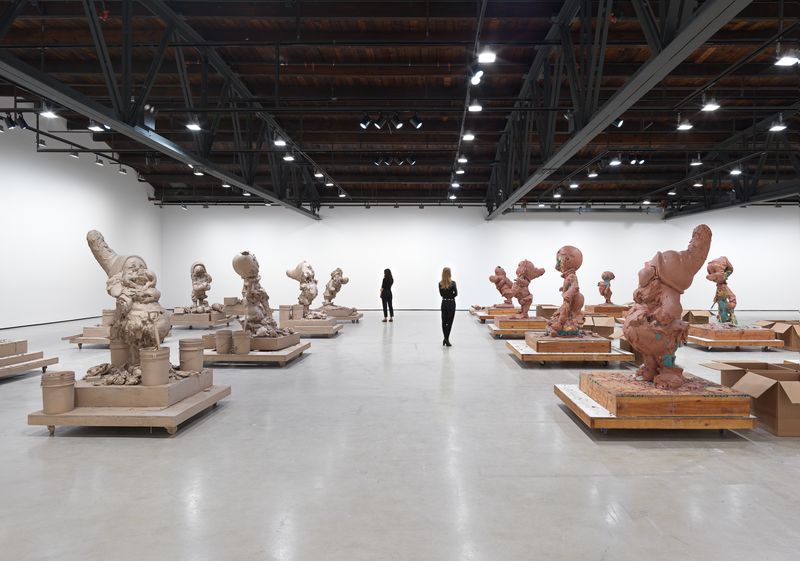 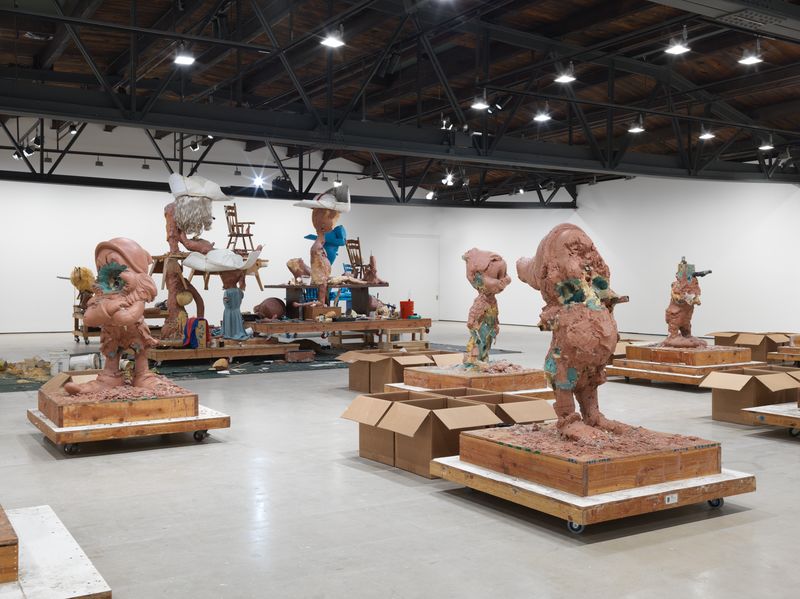 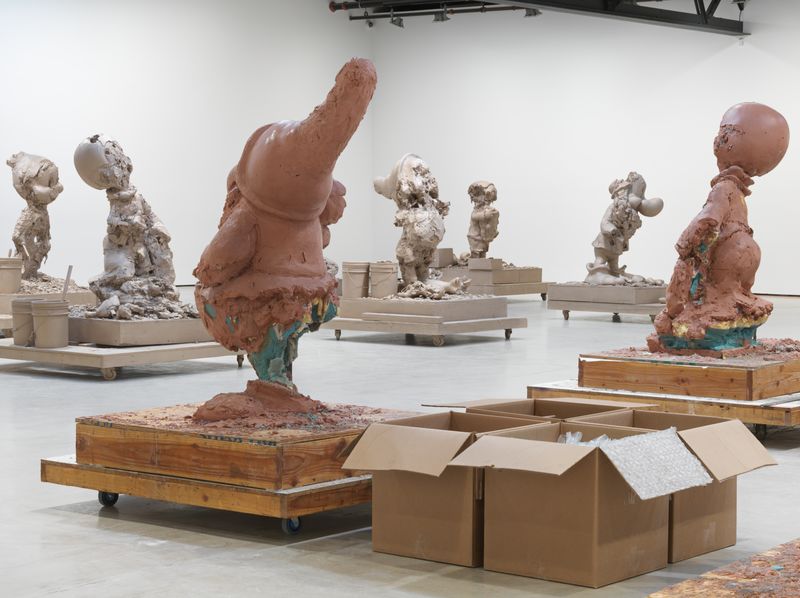 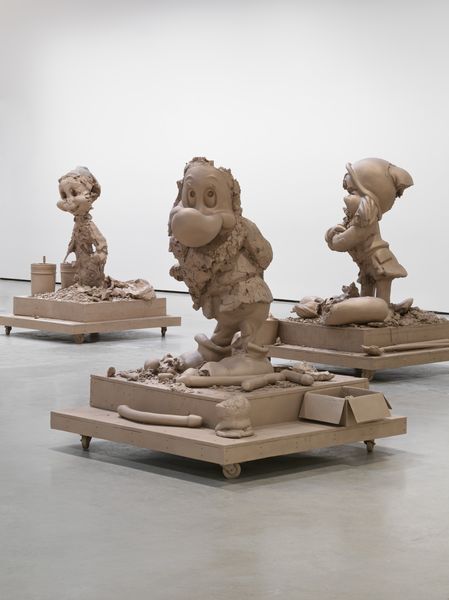 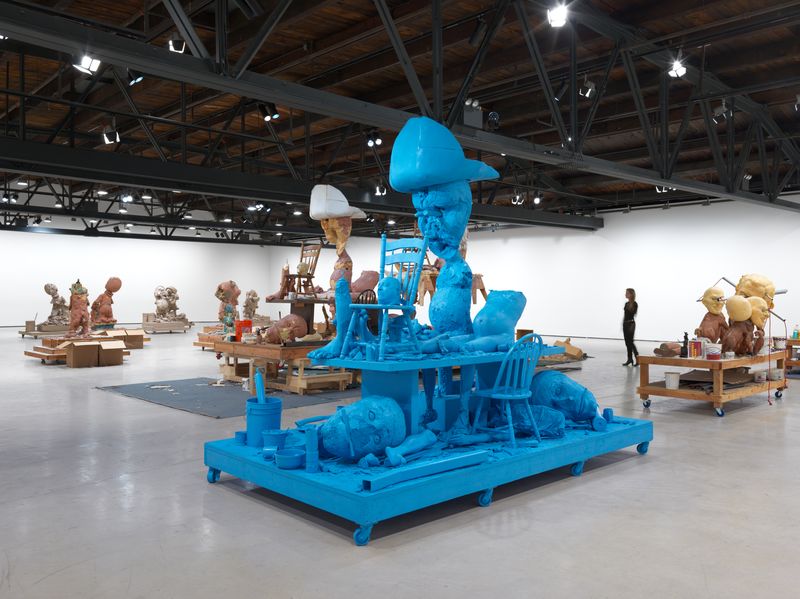 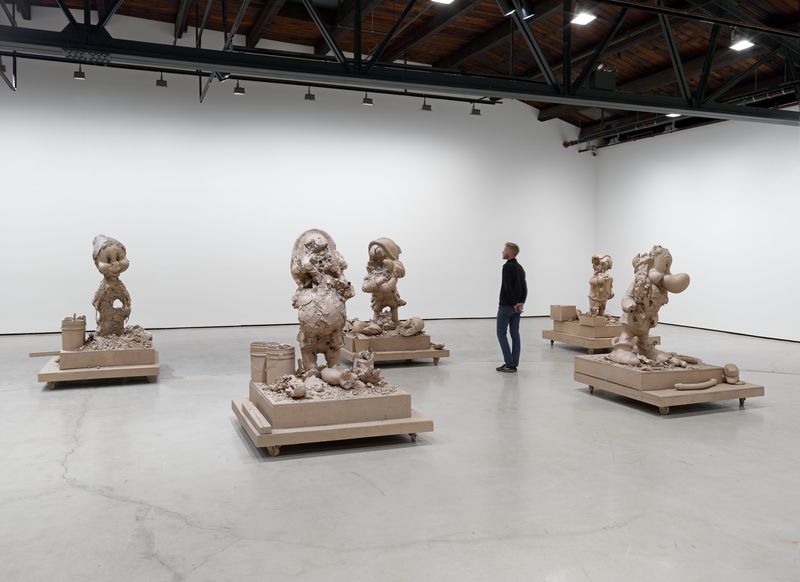