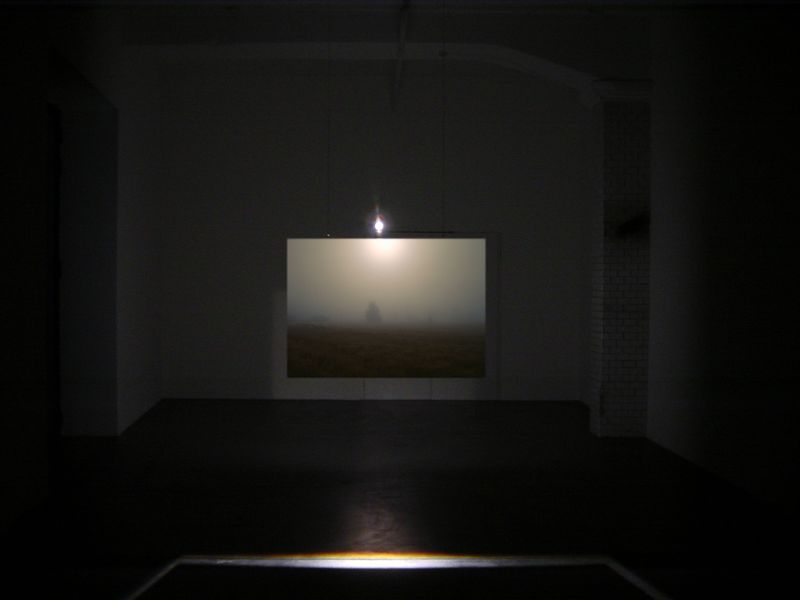 In his first solo exhibition in Switzerland, David Claerbout (b. 1969) presents new work at the Galerie Hauser & Wirth. The Belgian artist has reached a wider international audience with his contribution to the 2nd Berlin Biennale and his solo exhibition at the Kunstverein Hannover, which offered a comprehensive view of one of the most striking oeuvres in current video art. Claerbout situates his work between the worlds of photography and film, investigating this intermediary area in concise and impressive installations.

Entering the first room of the exhibition, the viewer steps into darkness. After a few moments, during which our eyes are getting used to the dark, we make out pictures on the walls, standing out from their opaque surroundings. The pictures – photographic transparencies in lightboxes – are of landscapes, shot during the night, on the borderline between civilisation and nature. Slowly, we identify white lit up traces of motorway markings in the foreground, then a strip of grassland, and behind it gradually emerges the outline of a group of monumental trees that never really come out of the dark but remain more of a suspicion. The name of lightbox is almost an exaggeration when applied to these picture sculptures, since only a fraction of the light given out by the fluorescent tubes comes through. The installation of the five “Nightscape Lightboxes” in a dark room recreates the darkness and – more importantly – silence associate with night.

Proceeding to the next room, the viewer finds a video installation called “The Rocking Chair”, with a projection screen in the centre of the space. It shows a woman sitting in a rocking chair on the veranda of her house. The video image seems nearly static, with movements virtually imperceptible and the figure in the chair rocking back and forth almost in slow motion. Stark chiaroscuro light accentuates the rigid geometrical structure of the image.

The projection screen stands free in the room, so the viewer can walk around it. Going around to the other side of the screen, you find yourself ‘inside’ the house, as it were. The woman is seen from behind, and the moment you walk over to the other side, she stops her movement and turns her head to one side ever so slightly, as if she felt the presence of the visitor behind her back and was now listening to the footsteps. After a moment’s pause, she continues to look out into the landscape that becomes visible for the viewer around the outline of the woman. The natural world outside is bathed in sunlight, so that the massive figure stands out from the brightness in sharp contrast. The static quality of the artificially slowed-down images and the sheer size of the screen, which monumentalises the figure of the woman, add to the impression of staginess and theatricality produced by the image. The screen for the projected image becomes a screen for our imagination. The involvement of the viewer in the image – the movement to the other side of the screen is registered by sensors (functioning as her sight and hearing) that set off the woman’s head movement – creating an encounter that can only – perhaps – be resolved in the imagination of the individual.

The final work in the show titled “Untitled (Mist over a Landscape III)” feels like a reversal of the “Nightscape Lightboxes”. While the latter is an imitation of night, this work recreates sunlight. A translucent photograph, taken against the sun in early morning, of a misty landscape hangs in the room. From behind a theatre spotlight throws a sharp light on the upper edge of the image, with the result that it looks like both the ‘electrical’ and the ‘photographed’ sunlight illuminating the landscape. The viewer is blinded by this excess of light, and consequently only make out the image with difficulty.

The suggestive power of the compositions and the strong presence of the images in Claerbout’s work leave a lasting impression enhanced by the physical experience of space and time that is generated in the process of perception. These works seem to call on the viewer to take part in a dialogue. As for the things that do not enter the picture – here it is up to each viewer to tell the end or the beginning of the story.