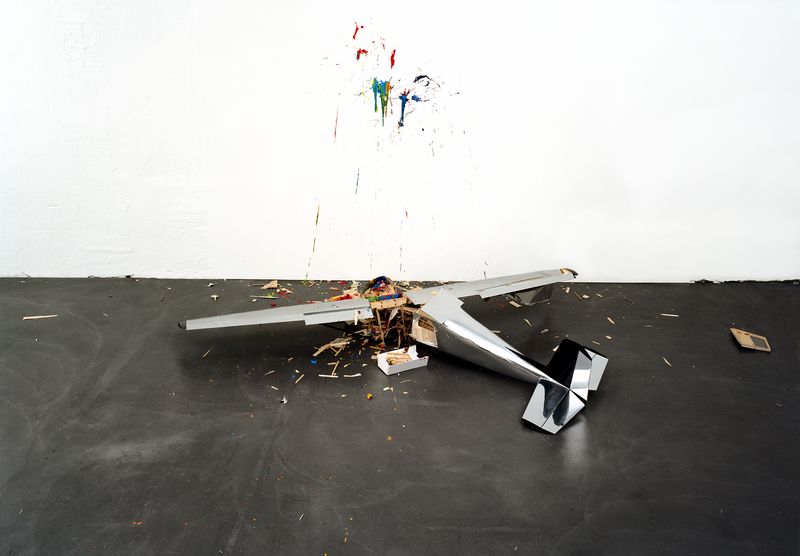 American artist Richard Jackson (b. 1939 in California), known internationally since 1992’s ‘Helter Skelter’ group show at the L.A. MOCA and his participation in the 1999 Venice Biennale, presents his aeroplane project, Accidents in Abstract Painting, which has taken him more than three years to develop and put into practice and is on view for the first time in his current exhibition at the Galerie Hauser & Wirth.

The centrepiece of this work is an aluminium model plane with a ten-foot wingspan. Filled with acrylic paint, it is to crash into the wall at 50 mph. What looks like an accident at the same time becomes an explosive painting action, with paint being hurled around the room along with plane wreckage.
The exhibition will feature, apart from the relics of this performance, the replica of a Cessna F150 built by the artist himself, with the paint scrubbed off and the surface finely polished, an additional scale model plane, various multiples and a number of drawings.

Richard Jackson’s aim has always been to stretch the limits of the medium of painting, to challenge its conditions and working methods: “It is my idea to try to expand painting, not just in size but to see how far it could be extended or pushed. I don’t feel my work as a criticism of painting but an optimistic view of what it could be. I felt then and I still feel that painting doesn’t need to be an area of art described by the materials that are used (…).”
Influenced by Abstract Expressionism and Action Painting, he has consistently extended the combination of action and painting, turning it into what amounts to a document of life that represents a faithful record of the time and physical effort put into it. “My work doesn’t edit anything, it’s evidence of a work performed, of a process”.

In his early work of the 1960s, Jackson worked to redefine the picture surface, painting canvases to hang them facing the wall according to a plan and spin them around on nails through the corners of the stretchers. In the 1980s, in his Big Ideas Series, he began to stack large numbers of canvases in various ways in order to explore the sculptural potential of painting.

Since the 1990s, he has also made use of sometimes highly sophisticated machinery, including lawnmowers, cars, fibreglass animals and airplanes, to spray, splash, hurl or drip paint about. His large-scale retrospective last year at the BAWAG Foundation in Vienna, for example, featured painting bears and beds.

Richard Jackson’s work is marked by a rational, methodical and conceptual approach and precision craftsmanship. But his penchant for experimentation, chance happenings and destruction plays an equally important part. What he is interested in is primarily the process of creating a work of art rather than its object quality.

Accidents in Abstract Painting represents a culmination of Jackson’s work with painting machines. This vision, monumental and uniquely his own, here combines precision and technology with aspects of chance, with a dash of humour thrown in. Richard Jackson makes an ironic comment on the heroic gesture of Action Painting and the concept of chance so prominent in abstract painting:

“The point is that you don’t know what the result is going to be. Painters somehow want to make things happen by chance. But nothing ever happens by chance.” 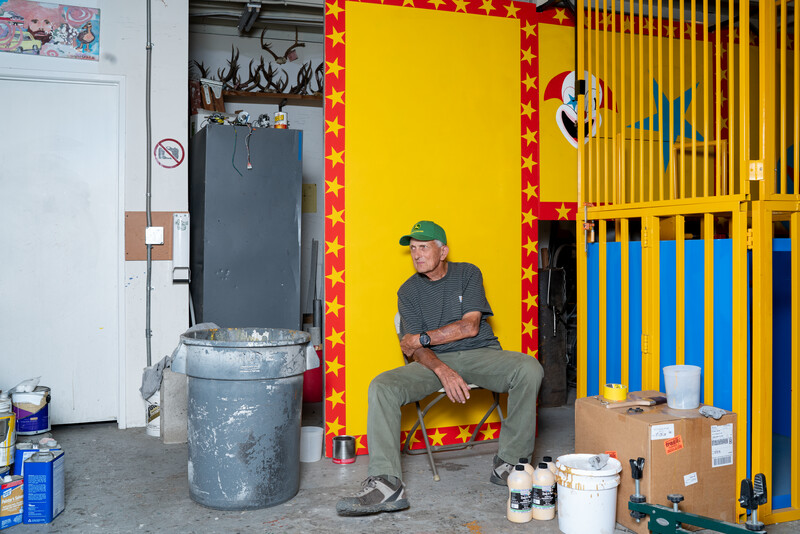 A pre-eminent figure in American contemporary art since the 1970s, Richard Jackson is influenced by both Abstract Expressionism and action painting, exploring a performative painting process which seeks to extend the potential of painting by upending its technical conventions. Born in Sacramento,…