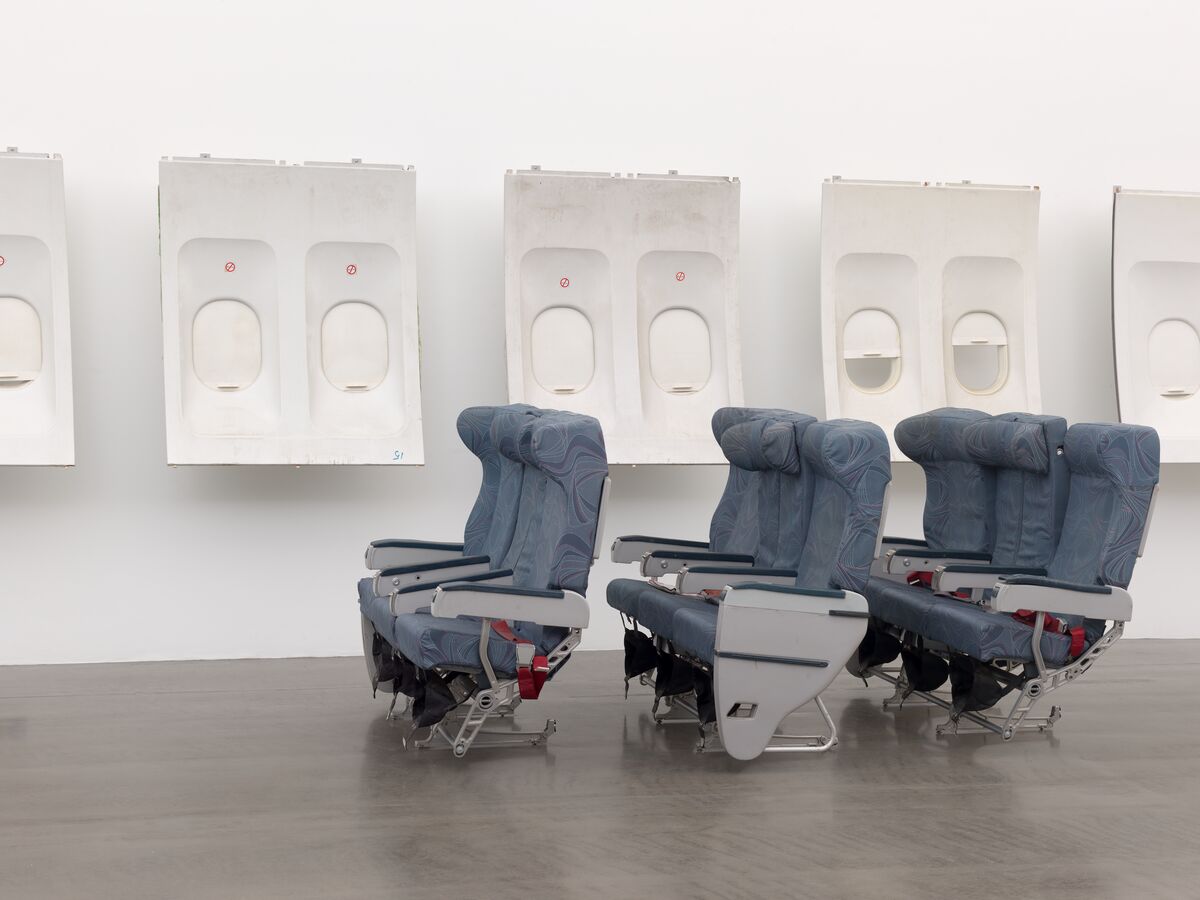 ‘Window’ is an exhibition at our London gallery by Isa Genzken featuring a new and unseen body of work. Genzken’s immersive environment expands on the themes of travel, through elements of an aircraft cabin, and the window as a juncture between interior and exterior spaces. In this respect, it reveals the artist’s interest in architecture and light, a topic of enduring resonance in her work as seen in the landmark exhibition in Chicago in 1992, ‘Everybody Needs at Least One Window’.

Isa Genzken has long been considered one of Germany’s most important and influential contemporary artists. Since the 1970s, Genzken’s multifaceted practice has encompassed sculpture, photography, found-object installation, film, drawing and painting. Her work borrows from the aesthetics of Minimalism, punk culture and assemblage art to confront the conditions of human experience in contemporary society and the uneasy social climate of capitalism. Throughout her fifty-year career, Genzken’s primary focus has always been sculpture, and although her style has remained varied, her work has maintained a striking common thread and internal truth to both her vision and to the works of art themselves.

The exhibition begins with ‘Saal (Room)’ made in 1989, a concrete sculpture which rises from its stark metal stand like a Brutalist architectural model. Oscillating between construction and destruction, it exists somewhere between fragmented ruin and autonomous space, appraising the lasting influence of modern architecture and its social and cultural implications, while paving the way for the ‘Fenster’ series that would follow. ‘Fenster’ or ‘Windows’ have long featured in Genzken opus, they are at once open and closed, material and immaterial, transparent and solid. They also give visual form to a central question in the artist’s oeuvre that deals with the relationship between sculpture and space, location and perception, examining the window as a social and architectural connection between interior and exterior.

The centre piece of the exhibition presents dislocated aeroplane parts – windows and seats – that evoke the instability of a global, homogenous society in constant flux and perpetual motion. Hanging from the walls of the gallery Genzken has placed fifteen airplane windows, displayed as if they were paintings, yet they are strangely reminiscent of eyes, the blinds like eyelids open, half open or completely closed. These subvert our understood notion of a window looking out onto the world – here they look back, observing the viewer, turning the voyeur into the view. For Genzken, travel is positive experience which presents the opportunity to view the world from new perspectives. As she said in the past on her use of the window as a tool, ‘The idea is that you open yourself up and find different ways of looking at things; that you have more than one frame of reference for the sculpture.’ [1] Enhancing this new viewpoint, we find a dreamlike countenance pervading the displaced, vacant seats of ‘Untitled’ (2018), implying an abandoned mode of transport, melancholic remnants which recall the splendour of air travel and the wonders it might bring.

A series of models towards the rear of the gallery showcase how the window motif also features in Genzken’s public sculpture where denied its architectural function, it instead becomes a reflexive means to highlight socio-cultural issues between space, architecture and inhabitant. For instance, Spiegel (1992), conceived to be thirty metres high, is taller than the postmodern Stadthalle Bielefeld it was designed to face. Genzken literally holds a metaphorical mirror to the Stadthalle, asking it to reflect upon itself. The base of the sculpture also serves as a bench or resting place, allowing the participant to stop a moment and look, an often-forgotten activity in today’s fast paced society. Whereas Genzken’s Camera (1990), a private commission positioned on the fifth-floor balcony of an apartment in Brussels, balances precariously framing and capturing a magnificent view, as a camera might do, but as the view is already present the work serves to highlight the absurd.

The exhibition at Savile Row displays how Genzken alters objects and locations with seemingly simple additions or subtractions that are both humorous and subversive, so that witty metaphors arise from the canniest of means, whether these are an airline window or mirror. These economical interventions alter our own perception of what and how we see, so that we can reflect on the space surrounding both the artwork and ourselves. Following the show at Hauser & Wirth London, Kunstmuseum Basel will present a major exhibition opening in June that focuses on the development of the first decade of Genzken’s career, 1973 – 1983, bringing together her Ellipsoids and Hyperbolos to highlight the influence of conceptual and post-minimal approaches in her early forays. 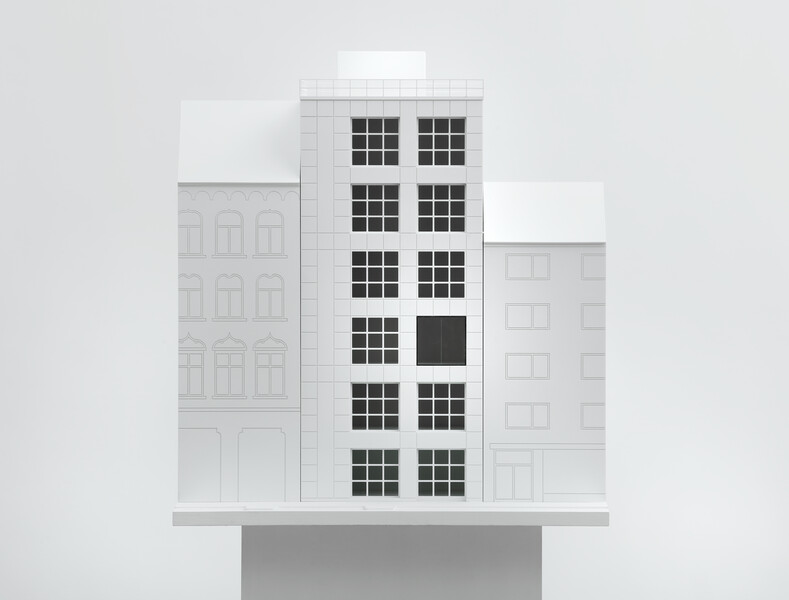 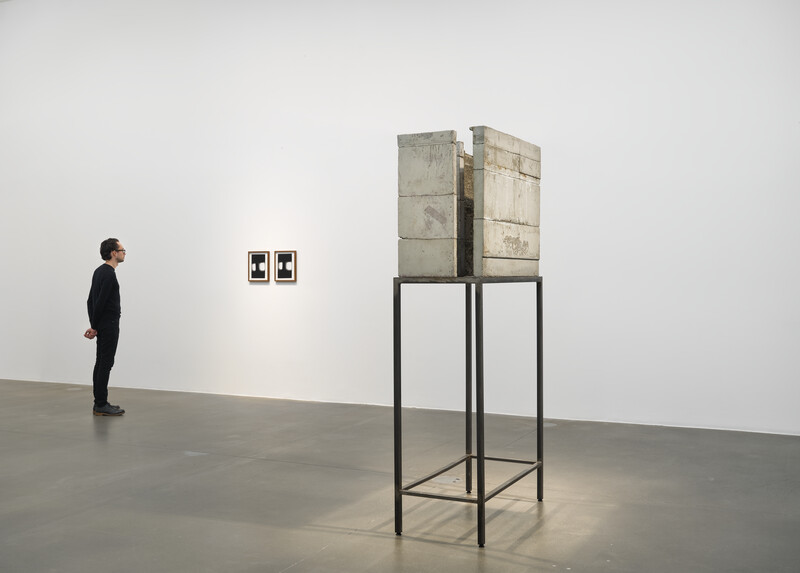 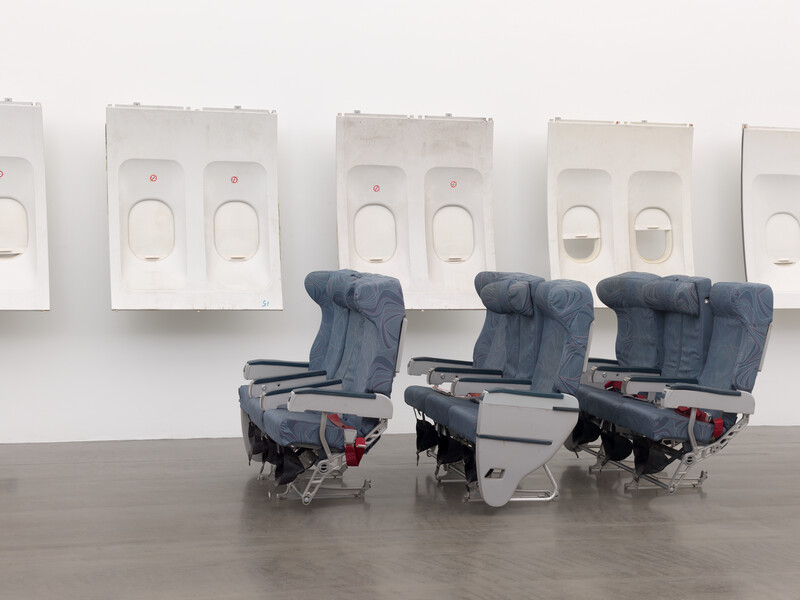 We are thrilled to invite you to the opening reception of ‘Window’, an exhibition at our London gallery by Isa Genzken featuring a new and unseen body of work. Genzken’s immersive environment expands on the themes of travel, through elements of an aircraft cabin, and the…
Learn more 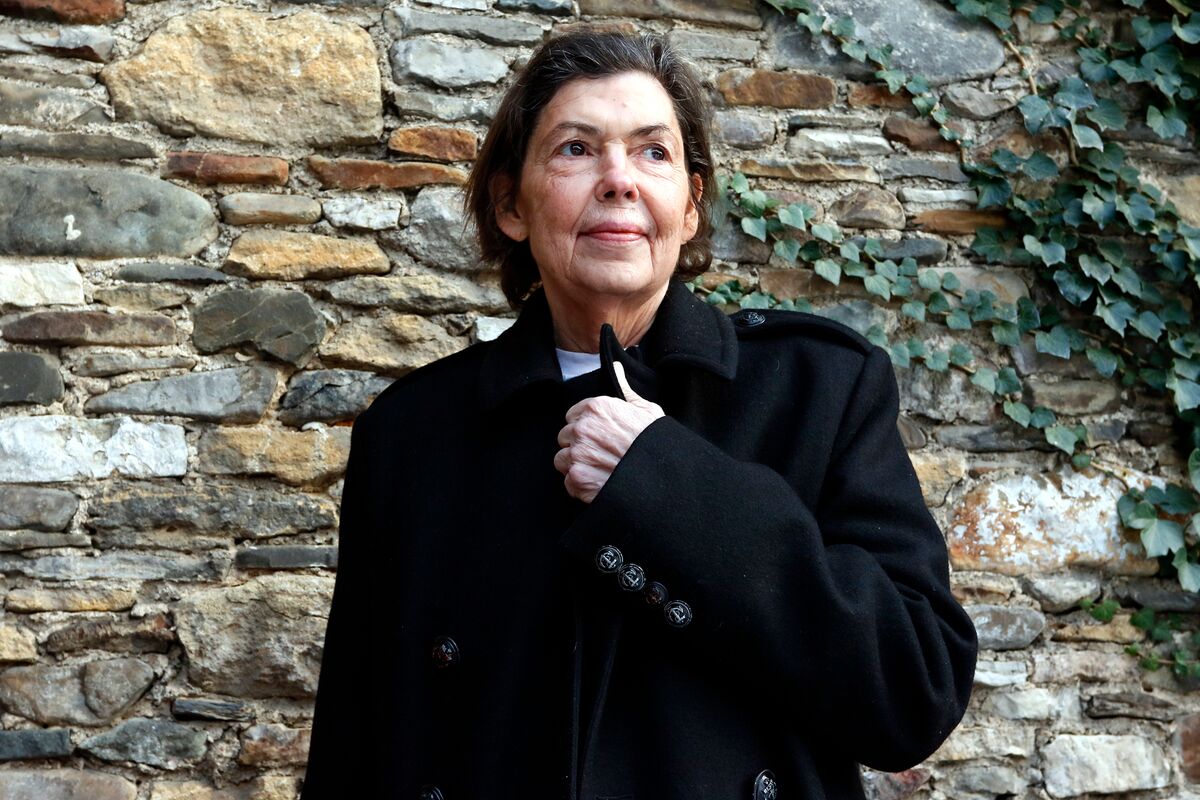 Isa Genzken has long been considered one of Germany’s most important and influential contemporary artists. Born in Bad Oldesloe, Germany, Genzken studied at the renowned Kunstakademie Düsseldorf whose faculty at the time included Joseph Beuys, Bernd and Hilla Becher, Benjamin H.D. Buchloh… 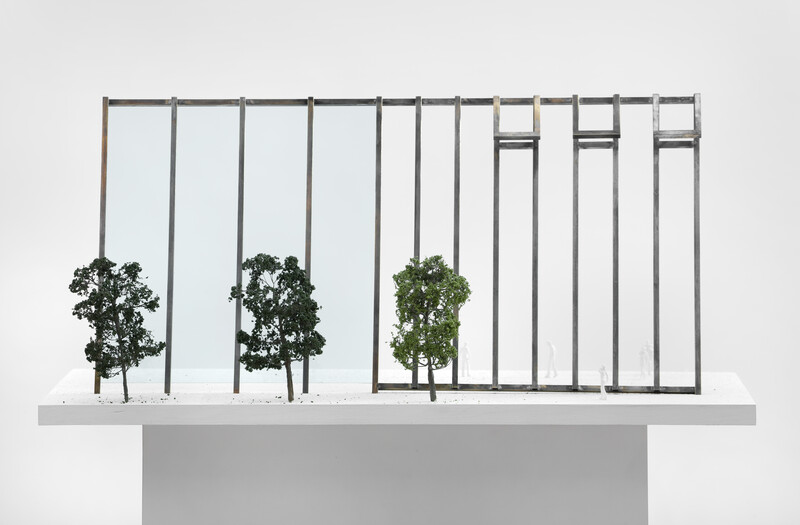 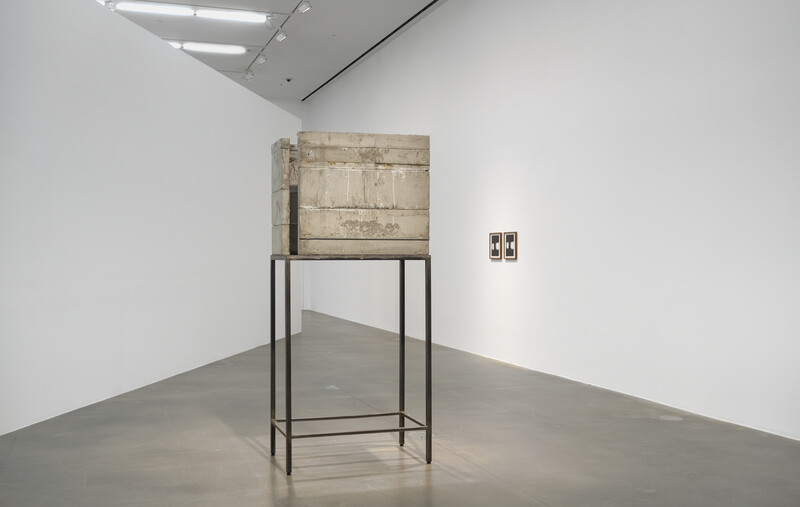 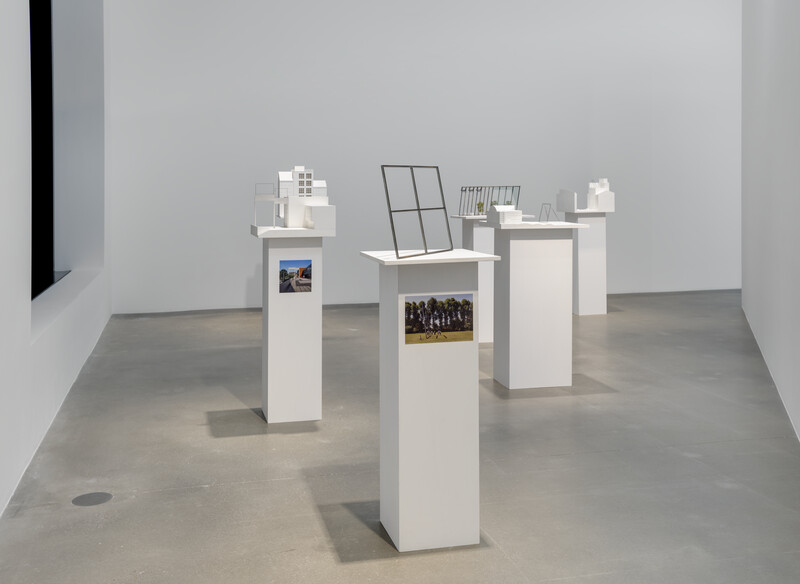 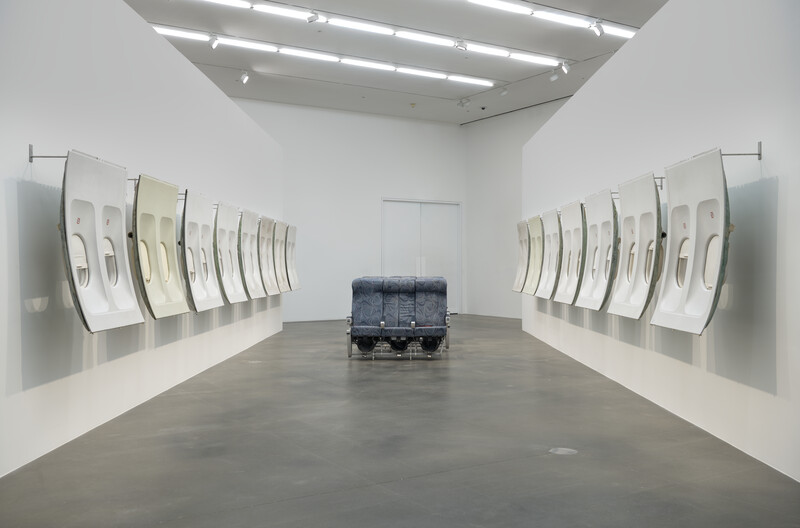 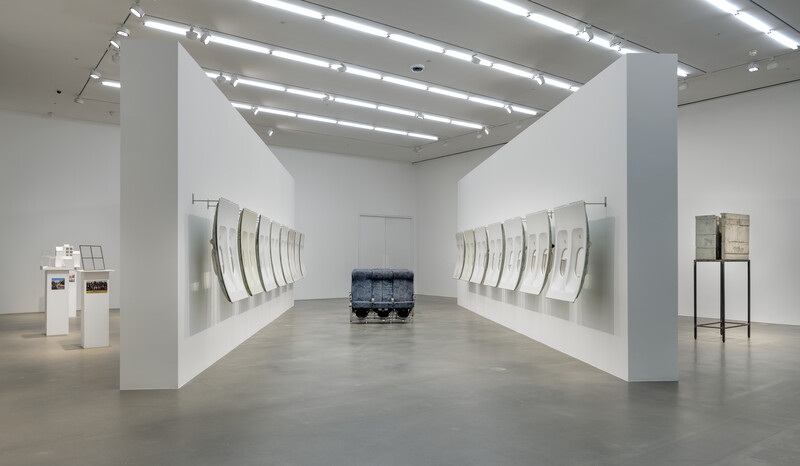 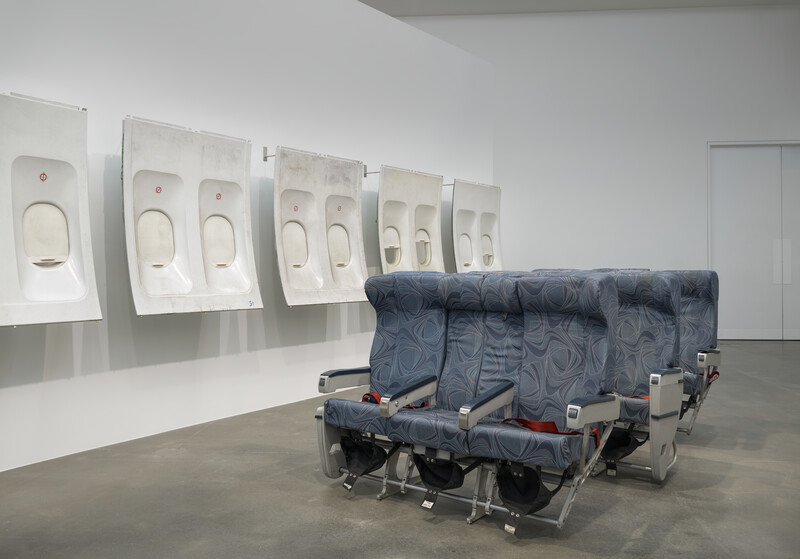 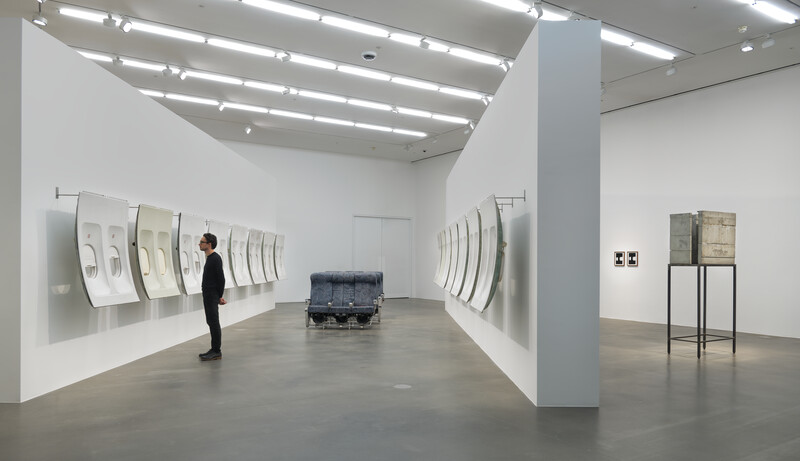