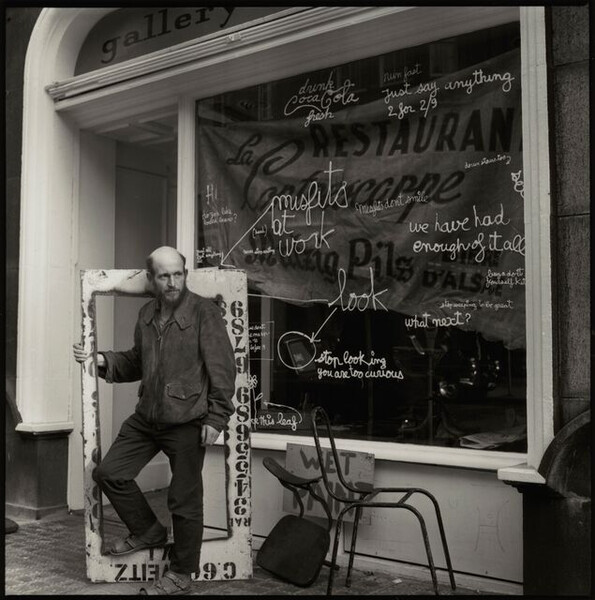 Inspired by the life and work of Gustav Metzger

Gustav Metzger (1926–2017) has been described as ‘the conscience of the art world’ for his art and his commitment to political activism on the subject of nuclear weapons, capitalism and environmentalism.

Metzger’s increased focus on social action identifies him as a key precursor of activist art. His body of auto-destructive work, meant as a public art form that would instigate social change, sought to provide a mirror of a social and political system that he felt was indifferently progressing towards total obliteration.

Gustav Metzger was always hopeful about the planet’s future and art’s role in it, as he stated: ‘Art needs to sink into the centre of a human being, come up, and that will be hope—the art will be hope.’ For Metzger, an artist is not simply a creator, but rather an instigator, whose role is to use their creative ability to motivate people to act.

In keeping with the work and mission of Gustav Metzger, we invite you to a call for discussion, weekly throughout July. Starting 2 July, at 10 am each Friday, a local climate activist will lead a discussion within the exhibition, sharing ideas and initiatives relating to a more sustainable future.

Book to visit on Friday mornings throughout July following the links below and join a discussion with one of our Somerset-based protagonists.

Passionate about all things sustainable, co-founder of One Planet Bruton, which aims to make Bruton sustainable by 2030 using Bioregional’s One Planet Living framework, Jane Durney is an independent environment and sustainability consultant.

On Friday 9 July, Jane will discuss the 10 principles of One Planet Living, originated by the charity Bioregional:

Jane Durney has been Chief Executive of a Wildlife Trust Chief Executive, led the sustainability assurance programme for the London 2012 Games, and a long time ago, trained as an accountant.

Ewan Jones has been Chair of Bruton Town Council and Mayor of Bruton since 2019, and locally is also a Co-Founder of both Community River Charity BruCREW, and Forest of Selwood CIC.

From 2015 to 2020 Ewan was Co-ordinator (Chair) of the South West Green Party, from the 2015 “Green Surge” through a European Referendum, two General Elections, the 2019 European Parliament Elections, and countless Local Elections. Today, he sits on the Boards of the Association of Green Councillors, Somerset Association of Local Councils, and is a member of the National Association (NALC) Climate Emergency Working Group.

Theo Simon is a Direct Action eco-campaigner and songwriter from East Somerset. He says, “Direct Action and civil disobedience are an essential part of most big social changes, and in this time of ecological emergency, a moral duty too.”

Theo himself has been arrested for obstructing road builders, pulling up GM crops, blockading nuclear bases and resisting eviction from green space ear marked for Hinkley C nuclear power station. He will gladly sing you a song, tell you one of his adventures in Direct Action, debate a point, or ‘pass on some useful tips’!