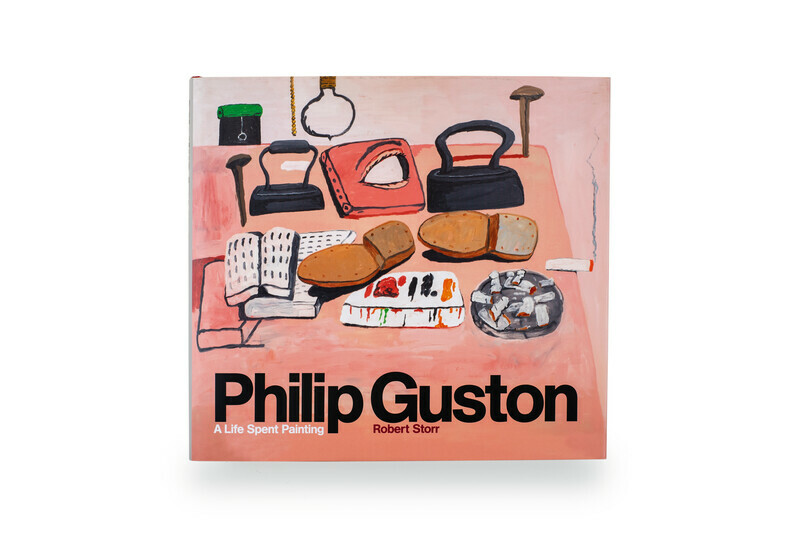 On the occasion of the release of ‘Philip Guston: A Life Spent Painting,’ a new publication from Laurence King, please join us for a live virtual conversation between the monograph’s author, Robert Storr, artists Carroll Dunham, Mark Thomas Gibson, Amy Sillman, and moderated by Alexi Worth.

This new survey of  Philip Guston’s pivotal and evermore widely recognized career takes full advantage of biographical details that have recently come to light, and ongoing debates about key dimensions of the artist’s oeuvre and the context in which it emerged. Most notable among them are the much vexed questions of the politics of New York School paintings in the aftermath of World War II, the gendered myths of Abstract Expressionism, and the hotly contested relation of ‘High Art’ to ‘Popular Culture’ for which Guston became a lightning rod after he abandoned his elegant, often elegiac gestural improvisations of the 1950s and 1960s for raucous cartoon-based symbolism of the 1970s featuring iconic, anti-heroic images of the artist as a beleaguered and bewildered brute.

About Philip Guston
Philip Guston (1913 – 1980) is one of the great luminaries of twentieth-century art. His commitment to producing work from genuine emotion and lived experience ensures its enduring impact. Guston’s legendary career spanned a half century, from 1930 to 1980. His paintings – particularly the liberated and instinctual forms of his late work – continue to exert a powerful influence on younger generations of contemporary painters.

About Robert Storr
Robert Storr, preeminent art critic, curator, artist, and educator, is the former Dean of Yale School of Art and senior curator in the Department of Painting and Sculpture at the Museum of Modern Art, New York. He has written numerous catalogues, articles, and books on major 20th and 21st-century artists. He was the first American to serve as visual arts director of the Venice Biennale and has been researching and writing on Philip Guston for more than three decades.

About Carroll Dunham
Carroll Dunham was born in 1949 and lives and works in New York and Connecticut. Dunham’s work has been the subject of numerous solo exhibitions at international institutions including Museum Ludwig, Cologne, Millesgården, Stockholm, and Drammens Museum, Drammen, Norway. A mid-career retrospective was held at the New Museum of Contemporary Art, New York. Dunham is currently featured in a two-person exhibition at the Sprengel Museum Hannover with Albert Oehlen, which travelled from Kunsthalle Düsseldorf. Dunham has also been included in notable group exhibitions including multiple Whitney Biennials and SITE Santa Fe, and at institutions including Musée d’art moderne et contemporain in Geneva, the Museum of Modern Art, New York, Museu Picasso, Barcelona, and The Institute of Contemporary Art, Boston.

About Mark Thomas Gibson
Mark Thomas Gibson received his BFA from The Cooper Union in 2002 and his MFA from Yale School of Art in 2013. Gibson has most recently exhibited with M+B in Los Angeles, presenting a solo presentation of 30+ drawings made in 2020 titled ‘Resting Space’. He has also exhibited at Rosenwald-Wolf Gallery at University of the Arts in Philadelphia, Fredericks & Freiser in New York, Loyal in Stockholm, and recently participated in the group shows, ‘Life During Wartime’ and ‘Woke!’, at the Contemporary Art Museum, University of South Florida, Tampa. In 2016, Gibson co-curated the traveling exhibition ‘Black Pulp!’ with William Villalongo at 32 Edgewood Gallery, at the Yale School of Art.

The artist released his first book, Some Monsters Loom Large in 2016, and the book was recently re-issued in a second edition in partnership with International Print Center, New York. Gibson’s second book Early Retirement was released in 2017 with Edition Patrick Frey in Zurich and was acquired by the Metropolitan Museum of Art in New York. Gibson is currently an Assistant Professor of Painting at Tyler School of Art and Architecture at Temple University and lives and works in Philadelphia, PA.

Portrait of Amy Sillman in her studio: Tess Mayer for Interview magazine, Courtesy the Artist and Gladstone Gallery New York and Brussels

About Amy Sillman
Amy Sillman is a painter who has lived and worked in New York City since 1975. Her work is based on drawing, improvisation, and a process she describes as raveling and unraveling at once, negotiating the terrain between things: figuration and abstraction, writing and image, humor and sorrow, and the intimate scale of the hand. Sillman has been exhibiting regularly in the United States and internationally since the 1990’s, and her work is held in many private and public collections including MoMA, The Whitney, MOCA Los in Los Angeles, the Brandhorst Museum in Munich, the Moderna Museet in Stockholm, and The Tate Modern in London.

Sillman’s mid-career survey show ‘one lump or two’ was curated by Helen Molesworth and originated at The ICA Boston in 2013. The exhibition was also accompanied by a monograph. Sillman is active as an art writer, and a book of her texts and drawings, Faux Pas, has just been published by After 8 Books, Paris. In Fall 2019 she curated the exhibition, ‘The Shape of Shape’ for MoMA’s re-opening, accompanied by a large-scale zine entitled ‘Shapes’ which was released through MoMA Magazine. The exhibition, temporarily closed due to COVID-19, has recently reopened and will remain on view until October 2020. Sillman’s next solo show will open in October 2020 at Gladstone Gallery in New York City.

About Alexi Worth
Alexi Belsey Worth is a painter and writer who has received awards from the Guggenheim Foundation, the Tiffany Foundation, and the New England Foundation for the Arts. He is currently represented by DC Moore gallery in NY.

Worth has written for The New Yorker, Artforum, Cabinet, and other magazines. In addition, he has written catalog essays for artists such as Jasper Johns, Carroll Dunham,  Jackie Saccoccio, and Jim Nutt. He lives in Brooklyn with his wife, the architect Erika Belsey.