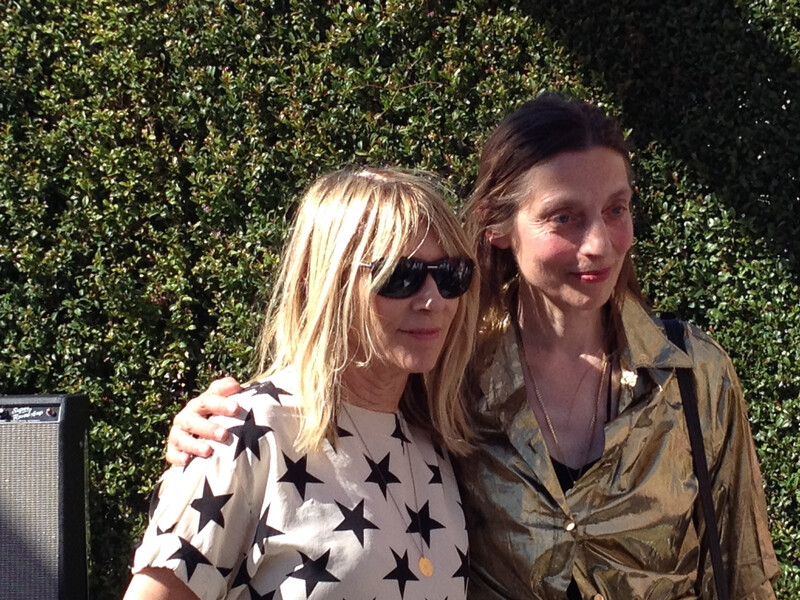 On the occasion of ‘Mike Kelley. Timeless Painting‘, we are honored to host artists Kim Gordon and Jutta Koether who will perform a musical response to complement the exhibition that runs through 25 January 2020 at Hauser & Wirth New York, 22nd Street.

The event is standing room only and space is limited.

Kim Gordon studied at the Otis Art Institute in Los Angeles in the late 1970s and has continued to work as an artist since. Her first solo exhibition presented under the name ‘Design Office’ took place at New York’s White Columns in 1981. For the past thirty years Gordon has worked consistently across disciplines and across distinct cultural fields: art, design, writing, fashion (X-Girl), music (Sonic Youth, Free Kitten, Body/Head), and film/video (both as actress and director).

Gordon’s artworks include the ongoing ‘Noise Painting’ series, depicting the names of experimental and noise groups; a series of paintings depicting the names of contemporary galleries and gallery owners; works from the untitled ‘From The Boyfriend’ series – Rorschach-like images painted on used denim skirts; ‘Twitter Paintings’ sourced from the Twitter streams of ‘GIRLS’ producer Jenni Konner, critic Jerry Saltz, and artist Richard Prince among others; and her ‘Wreath Paintings’, which employ the decorative folk forms as stencils to produce vertiginous color abstractions. An insistence on dismantling the hierarchical sanctity of the object has become a through line in Gordon’s practice, and in her most recent work, canvases are treated with direct application of paints, resins, glitters and fiberglass, as well as physical manipulation. Performing a painting becomes its own medium, as finished works are crumpled, overturned and flung. Fixed between states of de- and re-composition, battle scars from past performances become gestural abstraction via mischievous punk irreverence.

Jutta Koether’s practice intertwines painting with the genres of music, performance, and writing, developing an alternate genealogy and practice of the medium. She started her artistic career in her home town of Cologne in the 1980s, where she was editor of the influential pop culture magazine Spex. In the early 1990s she moved to New York where her work included collaborations among others with Tom Verlaine, Steven Parrino, John Miller, Tony Conrad, and Kim Gordon. She lives and works in Berlin and New York.

Koether’s work has been subject to an extensive survey at Museum Brandhorst in Munich and Mudam Luxembourg in 2018 and 2019, on the occasion of which a comprehensive catalogue featuring essays by Manuela Ammer, Benjamin H.D. Buchloh, Julia Gelshorn, Achim Hochdörfer, Branden W. Joseph, Tonio Kröner, Michael Sanchez, and Anne M. Wagner was published. Further exhibitions of her work were held at Dundee Contemporary Arts (2013), the Moderna Museet in Stockholm (2011), the Van Abbemuseum in Eindhoven (2009), and Kunsthalle Bern (2009). Her works are in the collections of major international museums, such as the Museum of Modern Art and the Whitney Museum of American Art in New York, the Museum of Contemporary Art in Los Angeles, Berlin’s Nationalgalerie, Museum Brandhorst in Munich, Museum moderner Kunst Stiftung Ludwig Vienna, Museum Ludwig Cologne, and Stedelijk Museum Amsterdam. Current solo exhibitions are on display at Museum Abteiberg in Mönchengladbach (through February 16, 2020), at Galerie Buchholz Berlin (through January 25, 2020), and upcoming at Lévy Gorvy New York (opening February 2020).

Since 2010 Koether has been professor of painting and drawing at the Hochschule für bildende Künste Hamburg. This position is in continuation of various educational engagements since the early 1990s including appointments at Columbia University, Cooper Union School of Art, and School of Visual Arts in New York, Bard College in Annandale-on-Hudson, Yale University in New Haven, Universität der Künste in Berlin and Kongelige Danske Kunstakademi in Copenhagen.