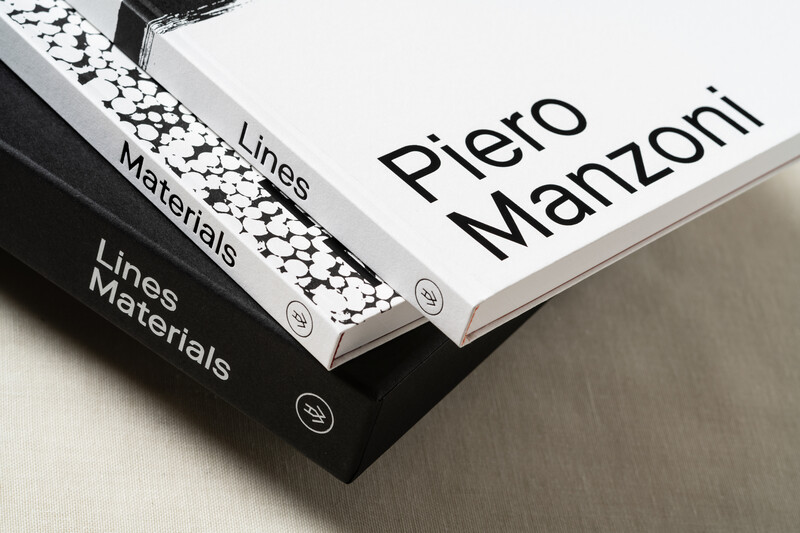 On the occasion of the ongoing exhibition ‘Materials of His Time’ ‘Lines,’ two concurrent exhibitions of work by Piero Manzoni, please join us in the Hauser & Wirth Publisher Bookshop for a conversation moderated by Choghakate Kazarian, with Brett Littman, Jack McGrath, and Richard Tuttle.

About ‘Piero Manzoni. Materials & Lines’
The two-volume publication highlights two key threads in the work of artist Piero Manzoni (1933–63). ‘Materials’ covers Manzoni’s years of prolific creation leading up to his untimely death in which he experimented with a wide variety of media in his paintings, including sewn cloth, cotton wool, fiberglass, synthetic and natural fur, straw, cobalt chloride, stones, fluorescent polystyrene, pellets, packaging, and more. ‘Lines’ delves into the eponymous body of work of fundamental importance to his well-known Achromes—paintings without color, which aimed to striped his work of any expression. Extensively illustrated, both volumes feature several art historical essays alongside a host of archival material, making this one of the most comprehensive sources on the artist to date.

Choghakate Kazarian is a curator and art historian. She has been a curator at Musée d’Art moderne de la Ville de Paris from 2011 to 2018 and has taught at the Ecole du Louvre. Her exhibitions include ‘Lucio Fontana, rétrospective’; ‘Henry Darger, 1892–1973’; ‘Karel Appel, l’art est one fête !’ and ‘Piero Manzoni, Achrome’. She has edited several exhibition catalogs and published various essays on post-war art.

Brett Littman has been the Director of the Isamu Noguchi Foundation and Garden Museum in Long Island City, New York since May 2018. He was Executive Director of The Drawing Center from 2007–2018; Deputy Director of MoMA PS1 from 2003–2007; Co-Director of Dieu Donné Papermill from 2001–2003 and Associate Director of Urban Glass from 1996–2001.

Littman’s interests are multi-disciplinary: he has overseen more than seventy-five exhibitions and personally curated more than 20 exhibitions over the last decade, dealing with visual art, outsider art, craft, design, architecture, poetry, music, science, and literature. He was named the curator of Frieze Sculpture at Rockefeller Center (2019 – 2020) and is also an art critic and lecturer and an active essayist for museum and gallery catalogues, in addition to writing articles for a wide range of U.S. and international art, fashion, and design magazines.

A native New Yorker, Brett Littman received a Chevalier of the Order of Arts and Letters from France in 2017 and his B.A. in Philosophy from the University of California, San Diego.

Jack McGrath is an art historian based in New York. He has taught art history and critical theory at Barnard College, Columbia University School of the Arts, Cooper Union, Parsons the New School for Design, and Yeshiva College. His writing has appeared in Frieze, October Files, and Piero Manzoni: Nuovi Studi. In 2017 he curated the exhibition Visual Notes for an Upside-Down World at PPOW Gallery in New York. He is currently at work on a monograph of Piero Manzoni based on his doctoral dissertation.

Richard Tuttle‘s direct and seemingly simple deployment of objects and gestures reflects a careful attention to materials and experience. Rejecting the rationality and precision of Minimalism, Tuttle embraced a handmade quality in his invention of forms that emphasize line, shape, color, and space as central concerns. He has resisted medium-specific designations for his work, employing the term drawing to encompass what could otherwise be termed sculpture, painting, collage, installation, and assemblage. Overturning traditional constraints of material, medium, and method, Tuttle’s works sensitize viewers to their perceptions. His working process, in which one series begets the next, is united by a consistent quest to create objects that are expressions of their own totality.

The event is free and open to the public. Space is limited, RSVP is required.

The entrance to Hauser & Wirth Publishers Bookshop is at the ground floor and accessible by wheelchair. The bathroom is all-gender. This event is low light, meaning there is ample lighting but fluorescent overhead lighting is not in use. A variety of seating options are available including: folding plastic chairs and wooden chairs, some with cushions.

Water, tea, coffee, beer, wine, and snacks will be available for purchase.