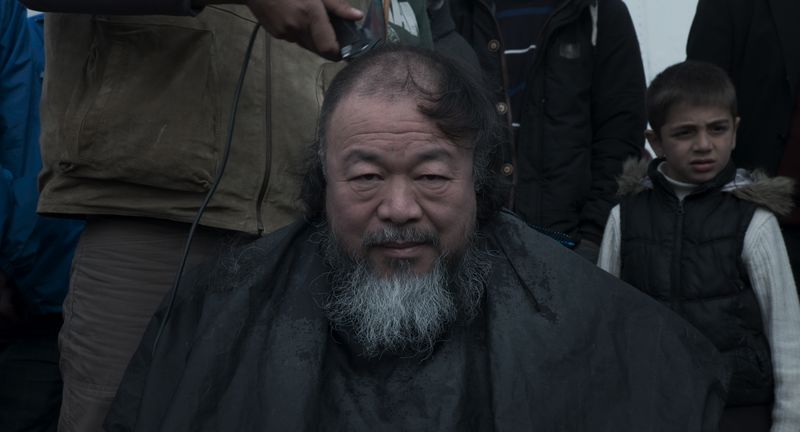 Over 65 million people around the world have been forced from their homes in recent years to escape famine, climate change and war in the greatest human displacement since World War II.

Join Hauser & Wirth Somerset for a screening of ‘Human Flow’, an epic film journey directed by the internationally renowned artist Ai Weiwei, that gives a powerful visual expression to this massive human migration. The documentary explores both the staggering scale of the refugee crisis and its profoundly personal human impact.

Captured over the course of a year, in 23 countries, the film follows a chain of urgent human stories that stretch across the globe. ‘Human Flow’ is a witness to its subjects and their desperate search for safety, shelter and justice: from teeming refugee camps to perilous ocean crossings to barbed-wire borders; from dislocation and disillusionment to courage, endurance and adaptation; from the haunting lure of lives left behind to the unknown potential of the future.

The film will be followed by a talk from Watershed’s Cinema Curator, Mark Cosgrove.

Mark Cosgrove has worked in independent film exhibition for over 25 years and is currently Cinema Curator for Watershed in Bristol. Mark has curated and toured film seasons on New European Cinema, French director Claire Denis and Austrian Ulrich Seidl, amongst other subjects. He recently co-founded and teaches on UWE’s MA in Contemporary Film Culture.
This event is organised by Where West Begins and is part of Hauser & Wirth Somerset’s Autumn Artist Documentary Film Series. Please note, this event will run until 9 pm.

Adult tickets are £8. Concession tickets are available for £4. To book or find out more, visit wherewestbegins.org.uk/event

Roth Bar & Grill will open from 6 pm for drinks and dinner. Please note, advanced booking for dinner is recommended to avoid disappointment.

To coincide with the screening, there will also be a video-van installation in our farmyard by Peter Shields, Daniel Petkoff, Angela Richter, and Karsten Hentschel who are taking part in the 2018 Banjul challenge – the longest banger rally in the world. The 3,700 mile long challenge starts in the UK and heads South through Morocco, Western Sahara, Mauritania and Senegal, arriving in Banjul in The Gambia. On arrival all of the rally vehicles are auctioned in aid of the Gambian National Olympic Committee (GNOC) and the association of Small scale Enterprises in Tourism (ASSET) who each receive 20% of the funds raised and the balance is distributed among local small businesses, NGOs, schools, and other local organisations. The team are also creating a travelogue to document their journey and explore the human rights issues affecting the countries that they travel through and raising funds for Amnesty International.

Visitors will have the chance to meet some of the team, learn about their journey, explore the vans, and view their video installation.