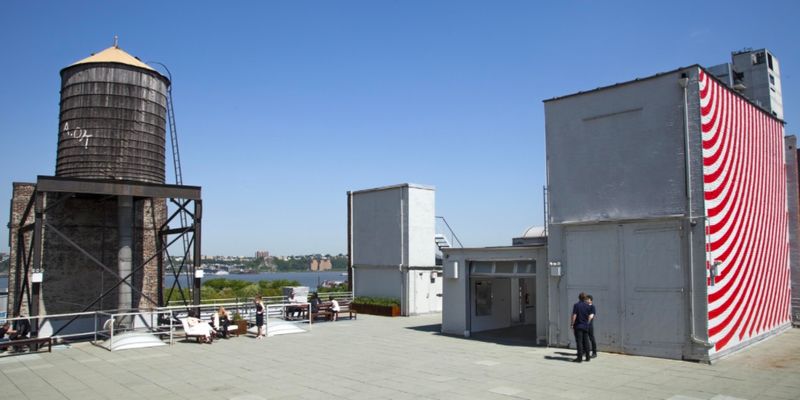 The roof opens at 7 pm and performance begins at 8 pm. Drinks and snacks will be available for purchase from the Roth Bar. Tickets are $5.

Brian Chase is a drummer and composer living in Brooklyn. His diverse range of work includes that with Grammy nominated rock band Yeah Yeah Yeahs, the community of the New York experimental music scene, and his solo project Drums & Drones (an electroacoustic project applying the Just Intonation tuning system to drums). Performances have taken him across the world to the Sydney Opera House (with Karen O’s Stop the Virgens and Nick Zinner’s 41 Strings), UK’s Reading and Leeds Festivals (with Yeah Yeah Yeahs), Toronto’s X Avant Festival (with Drums and Drones), and throughout NYC to such notable venues as The Stone, Pioneer Works, and The Metropolitan Museum of Art. Recorded works include several with Yeah Yeah Yeahs, the triple album and 144 page book Drums and Drones: Decade which chronicles the project’s first ten years, and albums with leading improvisers such as guitarist Alan Licht, clarinetist Jeremiah Cymerman, and accordionist/electronic musician Andrea Parkins. Brian held a performance residency at John Zorn’s venue The Stone in 2016 and an artist residency at the Headlands Center for the Arts in 2015. In the spring of 2018, Brian launched his own record label, Chaikin Records.

Yuka C. Honda (C is for Cline) is a musician/producer/composer/performer. Born in Tokyo, Honda spent part her childhood in Dusseldorf, Germany and in a small village in Denmark. She feels that having lived in different countries and learned different languages before her foundation was formed have had a major influence on her music, in which her major interest is in the integration of elements which may initially seem foreign. As such, her work naturally defies the concepts of genres and borders.

Currently residing in New York City, Honda is best known for
the band Cibo Matto, which she co-founded with Miho Hatori in 1994 and in which she created a unique one man band sound by triggering samples ‘live’. Honda has released three solo albums (on the Tzadik label) and has produced recordings by Sean Lennon, Martha Wainwright, YOKO ONO PLASTIC ONO BAND, and Cibo Matto.

She has recorded and performed with a wide range of musicians such as Yoko Ono, Esperanza Spalding, Bernie Worrell, Marc Ribot, Laurie Anderson, Sean Lennon, YoshimiO (of The Boredoms), Thomas Bartlett, Trixie Whitley, and Nels Cline, among others.

Sophia Brous is a musician, vocalist, composer, curator and multi-disciplinary performance-maker. An artist with diverse interests, she collaborates with companies and artists internationally on new works and commissions. Brous is current resident artist at New York’s National Sawdust and former artist-in resident at Robert Wilson’s Watermill Center and the Red Bull Studios New York. Originally from Melbourne and based in New York, recent engagements and projects include Dream Machine at Red Bull Festival New York and FORM Festival, Arizona, The Barbican production ‘In Dreams: David Lynch Revisited’, large ensemble collective EXO-TECH, the Arthur Russell Retrospective for BAM; DOCUMENTA Athens; motion picture Mary Magdelene, the MoMA Retrospective festival for the National Gallery of Victoria and Frank Zappa’s ‘200 Motels’ opera for the Southbank Centre London with the BBC Concert Orchestra. Alongside her performance projects, Brous is a recognised curator and emerged as one of Australia’s youngest artistic directors at the age of 22 as director of the Melbourne International Jazz Festival and Curator of Music at the Adelaide Festival of the Arts. She is current Artistic Associate at the Arts Centre Melbourne where she is founder and curator of Supersense: Festival of the Ecstatic.

Dave Harrington is a multi-instrumentalist, composer, and producer.  As a native New Yorker, he has worked across many genres and musical communities including the downtown improvised scene, Brooklyn indie rock, substraits of the jamband world, and the city’s electronic milieu.  Perhaps best known for his collaboration with Nicolas Jaar in the duo DARKSIDE, Harrington has run with the spirit of synthesis that also drove that band and carved out a space for himself where improvisation is central to all that he does, a freewheeling and psychedelic approach that is applied to everything from jazz to techno to feature film scores.  In 2015 he released his debut solo LP as the Dave Harrington Group on Jaar’s Other People label and toured in support of it performing headlining shows across Europe and the US as well as appearing at festivals ranging from Pitch Festival in Amsterdam, to We Love Green in Paris, and The Gent Jazz Festival, and, in the US, Big Ears Festival and Moogfest.  He is currently working on new music for the DHG and his own solo work.

Taylor Levine, guitar
Taylor Levine is a guitarist and circuit builder. He is often working within the experimental, improvised, composed, classical and noise music communities.

Besides playing in his quartet Dither, he has been found making music with a diverse range of artists such as John Zorn, Steve Reich, Weasel Walter, Marc Ribot, Erykah Badu, Tyondai Braxton and Kronos Quartet.

When not performing, Taylor can be found living in Brooklyn developing electronic circuits for himself and others in the music community.

Along with Paul Raffaele, she​ runs ‘Love Injection’ a monthly print fanzine distributed free via a network of independent record stores nationally and internationally. Co-edited by Paul Raffaele and Barbie Bertisch, ‘Love Injection’ has quickly established itself as a critical platform for celebrating the constantly shifting cultures of dance music. Featuring in-depth interviews with DJs, musicians, artists, and promoters; profiles on record labels, record stores, and nightclubs; alongside record reviews and DJ charts, ‘Love Injection’ is an essential monthly read for anyone interested in dance music and dance-floor culture in all its manifestations, past and present.

As of 2018, she is performing live with Seedy Films, a new band on Manono Records, a label she now runs with Luke Jenner.