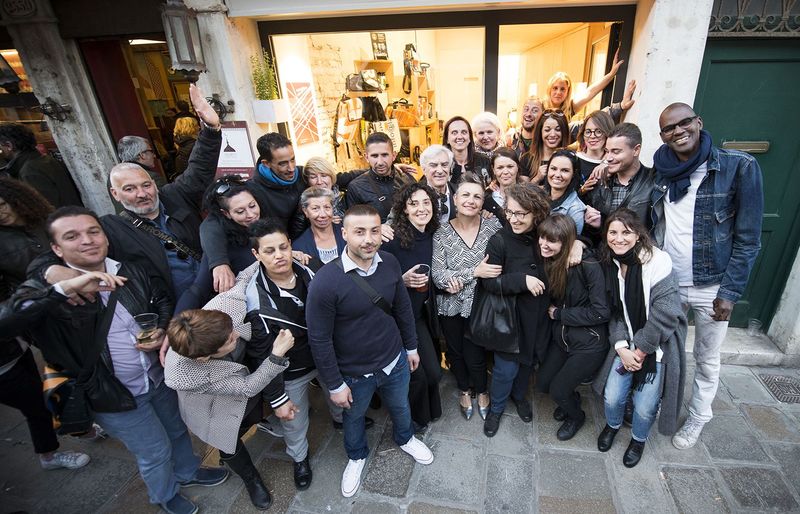 Mobilizing at the Margins: Mark Bradford, Social Change, and Filmmakers as Messengers

On the occasion of ‘Mark Bradford. New Works,’ the artist’s first gallery exhibition in his hometown of Los Angeles in over 15 years, and on the heels of his acclaimed exhibition for the US Pavilion at the 2017 Venice Biennale, which will travel to The Baltimore Museum of Art, we hope you will join us for a screening of ‘Mark Bradford and Rio Terà De Pensieri: Process Collettivo.’ This enlightening, 10 minute documentary follows Bradford as he prepares for the US pavilion, as well as his groundbreaking work with Rio Terà dei Pensieri, an Italian nonprofit that supports skill-based training and reintegration for inmates of Venice prisons.

After the screening, Fipps will join Agata Gravante, Process Collettivo Creative Director, and Hauser & Wirth Los Angeles Senior Director Stacen Berg and Events Manager Russell Salmon for a discussion about the evolving partnership and its ability to encourage students to reimagine the role of filmmakers as neighbors and citizens committed to meaningful social change.

This event is free, however, reservations are recommended.

About Heather Fipps
Heather Fipps is a Los Angeles based filmmaker, video designer, and educator. She works in a variety of genres including narrative and documentary films, commercials, and television shows for networks and studios such as BBC, CBS, PBS, and Netflix. As an independent filmmaker, Heather has developed projects for clients such as the Los Angeles Children’s Court, California Air Emissions Board, and the New Jersey State Department of Health. She also works as a video designer for multi-media theatrical productions including: John Fleck’s ‘Blacktop Highway’ (Redcat, LA; Dixon Place, NY) and Fanshen Cox DiGiovanni’s ‘One Drop of Love.’ Heather holds a position as Professor of Television, Film, and Media, specializing in the course Community Impact Media at California State University Los Angeles. Heather serves as Director of the Student Production Unit, a community engagement initiative that partners student filmmakers with local nonprofit organizations. Together they redefine the role of filmmakers as neighbors and community partners committed to meaningful social service.

Heather spent a year filming Bradford and his artistic process as he represented the United States at the 2017 Venice Biennale, and his collaboration with Rio Terà dei Pensieri, an Italian nonprofit that creates opportunities for skill-based training and reintegration for inmates in Venice prisons.

About Rio Terà dei Pensieri
Rio Tera die Pensieri is a social cooperative that is involved with the work placement of people under criminal judgment, promoting their training and involvement in work activity characterized by handicraft and services. The work activities are based on the spatial characteristics of the locations where they were placed, paying special attention to the surrounding territory, the city of Venice. Currently the cooperative manages three labs (a silkscreen lab, a lab for recycled-PVC accessories, and a cosmetics lab), an organic produce garden and three workplaces outside of the prisons (cleaning streets and public areas, the production of bags and accessories, and salespoints for artisanal products). The products from this handicraft work are sold through retail outlets as well as public and private commissions.