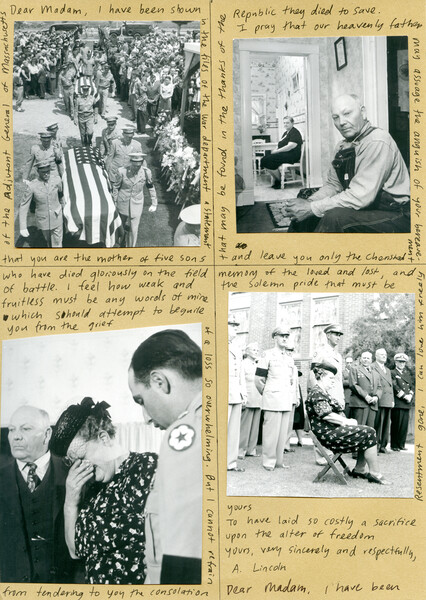 I am often asked, as an artist and as a feminist who has contended with motherhood in my work, to hold forth on what it is like to have two sons. The question is meant this way, really: Your work is invested in troubling the values of patriarchy, and yet you’ve created two future patriarchs. Explain?

A version of this question has been put to many feminists and proto-feminists who bore male children, from Elizabeth Cady Stanton (five sons) to Audre Lorde (one), Adrienne Rich (three), Robin Morgan (one), Toni Morrison (two) and so on. Beneath it lives a delicate insinuation that someone is being hurt: either the mothers, for whom sons are an inconvenience on the path to liberation, or the boys themselves, who are being held back in their exploratory manhood by way of their mothers’ politics. When Adrienne Rich was asked much the same question—regarding how her three sons were affected by her radical feminist writing and activism—she responded simply: You’ll have to ask them.

What will my children say when they are old enough to say it? Has my striving imprinted on them, for our better or our worse, or some of both? I can’t say that I expected it. During both of my pregnancies, I carried low down and all in front, like a taco, rather than high, wide and round, like a deflating basketball. For that reason and maybe others, a lot of people around me predicted that my first child would be a boy. But I refused the information from my midwives, and came to know my son to be a son only as a wet and tiny being, throbbing on my chest. The news of my second son was revealed earlier, through a blood test. When my partner and I went in the following week for an ultrasound, I asked the doctor if she was sure. She responded by silently rolling the wand over to the side of my stomach, where I watched two glowing, phosphorescent marbles come into view. I still remember: They were pulsing brightly in the darkness.

There is much I could write about this moment and all that has followed—the personal reckoning and recognition—about what it feels like to be the mother of sons. Instead, I will try to use these paragraphs to contend with something beyond my little world: the status of the ‘mother in patriarchy,’ a contradictory designation that not one of us escapes. 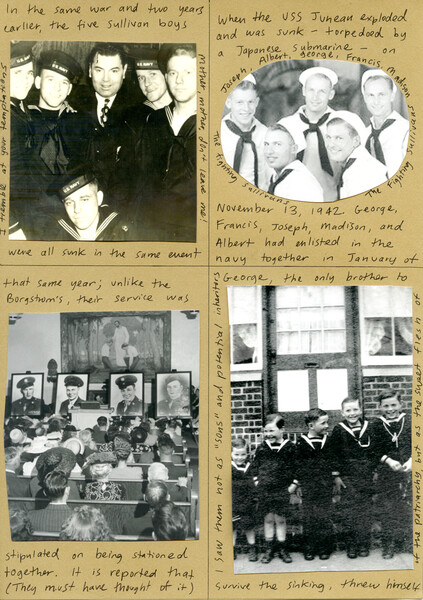 At the same moment that I began to unspool this idea, I was installing a museum project that was to appear alongside several works by the German artist Otto Dix. I wasn’t overly familiar with Dix’s history, other than the fact that he had been a soldier in World War I and thereafter depicted military conflict and its afterlife in his work. Included in that particular presentation was a small print of a heavily pregnant woman standing over the body of a decomposing soldier (who, shown in profile, appears himself to be encased in a kind of womb). The print—brute and sketchy—might be easily read as a contrast between life- and death-making forces. But, in fact, those forces are much the same under patriarchy, aren’t they? With new life, motherhood produces new soldiers. The battlefield requires an endless stream of repopulation; it needs (majority male) bodies. Dix’s etching, titled ‘Pregnancy,’ was made in 1922. If that hunching figure were carrying a boy, the same fetus that hovered over the dead of the First World War would have been enlisted to fight in the Second.

Coming into contact with that print—passing it dozens of times a day as I came in and out of my own adjacent installation—did what the best art can do: It opened a window. It undid my facile (and conventional) idea of mother as the harbinger of peace and stability, and allowed me to see the pregnant body anew, as reinforcing rather than contracting the aims of nationalism and war. Dix’s figure, however grief-stricken, is not at odds with globalized aggression simply by virtue of her capacity to procreate. Quite the opposite; she is its gestational engine. Once home from installing, I returned, urgently, to the worn pages of Rich’s 1976 book, ‘Of Woman Born: Motherhood as Experience and Institution’—to which I refer across these paragraphs—scanning to find a passage I remembered from many years prior:  ‘‘Vous travaillez pour l’armée, madame?’ (‘You are working for the army?’), a Frenchwoman said to me early in the Vietnam War, on hearing I had three sons.’ Another few lines follow, spelling out her point even more clearly: ‘Under the realities of organized male territoriality and aggression, when women produce sons, they are literally working for the army.…For generations, we have entered our sons in some kind of combat.’

This phenomenon—which a more genteel academic might call proto-natalism—is defined as the ‘[non-waged] militarization of reproduction’ by Elisabeth Domansky in her 1996 study ‘Militarization and Reproduction in World War I Germany.’ Across all social classes of Western Europe in the 20th century, women were called on to ‘do their patriotic duty’ and produce future soldiers, both during and between wars. Willingly or not, knowingly or not, mother-bodies are the most instrumental tool of the nation-state. Without us, there is no army.

‘Willingly or not, knowingly or not, mother-bodies are the most instrumental tool of the nation-state. Without us, there is no army.’

Needless to say, there is at present no military conscription in our country, and women can serve in the armed forces. We can be the fighters and the progenitors of future fighters all at once. And yet, Rich’s words ring out, ever apposite: Endless wars and the jingoism that fuels them still leave so many of our children dead and wounded, and so many parents cracked open. Even if the scaffolding disappears (i.e., obligatory military service), the underlying structure remains intact.

My older son is now, as of this writing, almost four years old. After he was born, I couldn’t imagine him being one month or six months or—impossible—one year. It seemed exceptionally far away, so long and cyclical was each little day. And now, at almost half my height, he is long-limbed and robust, a very different kind of body on my chest. He is more physically expressive than any other child in my orbit, in both tender and explosive ways. Several weeks ago at a friend’s house, I was helping him look for a piece of a toy he’d misplaced and was struggling to describe, finally settling on ‘peeler.’ When we discovered it, under the couch, it was revealed to me to be a small plastic gun. He was attracted to it for reasons we might extrapolate, or perhaps just because it was an accessory unknown to him. Not wanting to call attention to it as an illicit object (he catches on to these things, and it is hard to un-catch them), I let him hold it. As that gun sat limply in his hand, it occurred to me: He not only didn’t know the name for this object, he couldn’t yet begin to know its use.

At what moment do our sons turn into symbolic and literal soldiers, inheritors of the patriarchy? How do they regard us, their mothers, in the process? In her 1974 poem ‘To a Boy-Child,’ the feminist writer Sue Silvermarie so poignantly and mournfully accounts for the caustic triangulation between mother, son and aggressive desire:

i tremble to see your temptations.
how clear for me what losing you would mean.
how confusing for you
little man. already
you’re lured by what passes for power,
and is, by half.
what do I do with your guns?
outlaws, you’re playing, and I think
it is i who am out of the law,
it is you within it,
approved,
who grows blind to its bars…

Despite my better attempts to avoid solipsism in writing about a question with which I am entangled, here I must admit that speaking around my son feels impossible. I am not simply a mother inside of an anti-maternal world. I want to grant him total privacy inside all of this (as Rich did, faithfully), and yet I am his mother—I watch his body move from room to room as I write these words, running around the house, arms full of books—and this is our world, even if much of it still remains a mystery to him. How to raise this boy? And how to reverse engineer that question by thinking about the system that necessitates it in the first place? The truth—or my truth—is the best way to answer it is to speak of creating pro-maternal worlds from within patriarchy.

What might my interviewer think if, instead of offering a vacant response about ‘raising feminist boys,’ I spoke honestly about my abiding fear of creating future men who are not able to live for themselves? Who are both innately attracted to ‘peelers’—to being Outlaws—and drafted into that way of being, thinking and feeling?

In her 1979 essay ‘Man Child: A Black Lesbian Feminist’s Response,’ Audre Lorde wrote of preparing her son for a different kind of battle, one that this short text has not otherwise touched on. ‘For survival, black [boys] in America must be raised to be warriors.’ Yet warriors are not so easily imbued with self-knowledge. ‘I give the most strength to my children by being willing to look within myself,’ wrote Lorde. This task, of mutual self-actualization—of asking our boys to confront their own real selves and wants—feels to me to the most anti-patriarchal thing I can imagine. Because, of course, the question of what we want for our sons is most of all a question of what we want for ourselves.

Perhaps for what it represents about the cost of mothering our children into war, I have become fixated on sets of brothers who all died—together and apart—in combat. There were, famously, the Borgstrom brothers, LeRoy, Clyde, and twins Rolon and Rulon from Thatcher, Utah. Stationed separately, they were all killed over a six-month period in 1944 during World War II. One died under a falling tree while clearing an airstrip, the others in bombing raids in Germany and from battle wounds in France. In the same war and two years earlier, the five Sullivan boys were all sunk in the same attack when the USS Juneau exploded—torpedoed by a Japanese submarine—on November 13, 1942. George, Francis, Joseph, Madison and Albert, ages 20 to 27, had enlisted in the Army together in January of that same year. Unlike the Borgstroms, their service was stipulated on being stationed together. It is reported that George, the only brother to survive the sinking, threw himself over the lifeboat after five days at sea (a day before the remaining men on the lifeboat were rescued), driven insane with hypothermia and grief. Not to imagine the mothers is impossible. Imagining them is also all that’s left. 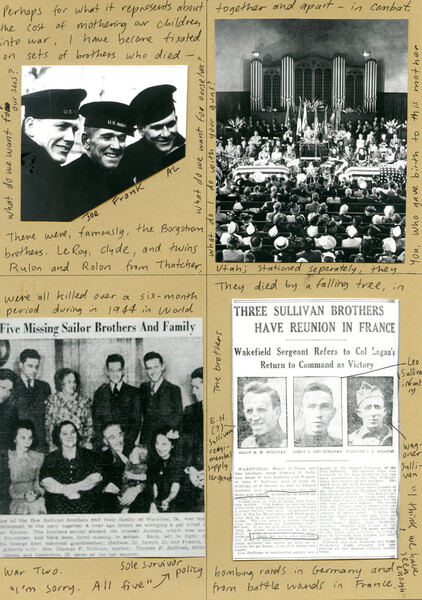 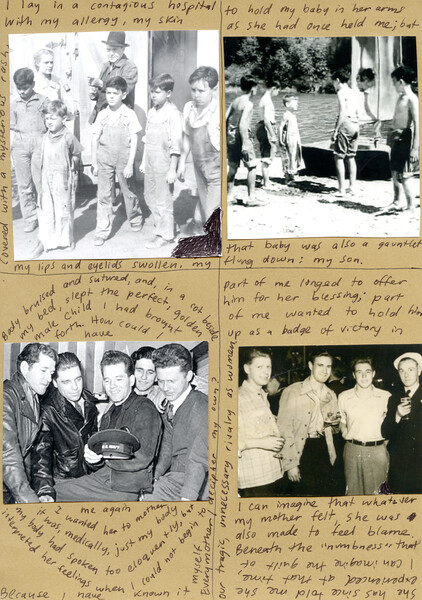 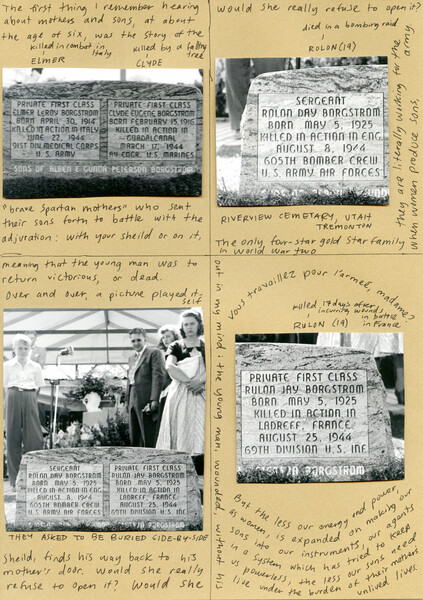 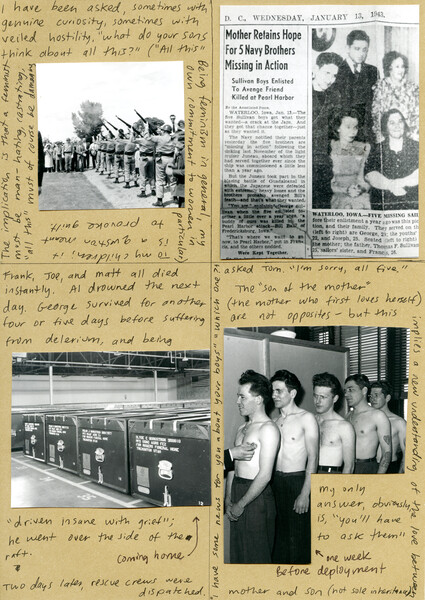 Excerpt from drag diary, a travel notebook in progress

The Syntax Itself: Marko Nikodijević, Nikolaus Bachler and Olivier Renaud-Clément in conversation

Mussolini’s Microphone: A conversazione between Maurizio Cattelan and Fabio Mauri

Six decades in the art world: Calvin Tomkins sits down with Randy Kennedy