A Sense of Poetry: On learning from Robert Frank 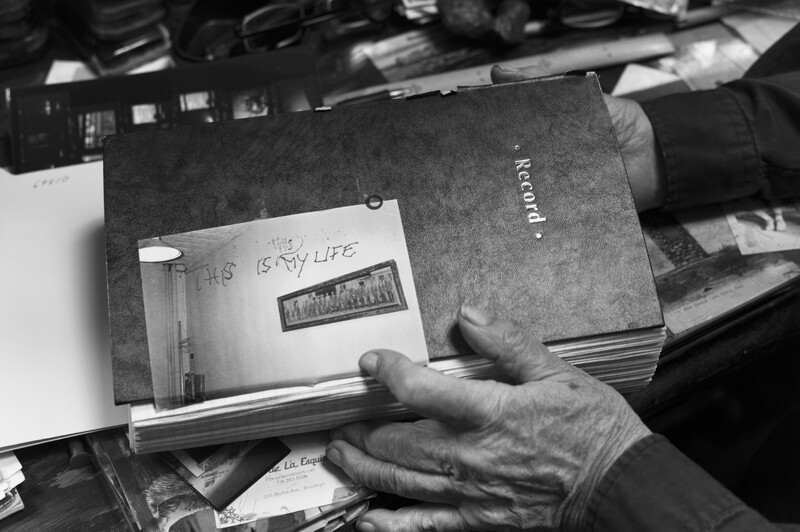 This is My Life (Roberts diary), New York, 2017. All images: © Jim Goldberg. Courtesy the artist and Pace/MacGill Gallery

I knew Robert Frank for more than 40 years, which makes it strange to say that I cannot clearly remember the first time we met in person. But this is probably because we had gotten to know each other earlier entirely through correspondence, dozens of letters, a form of friendship and artistic exchange that now feels ancient and completely lost.

It was the late ’70s and I was in my early 20s living in San Francisco, working on my first body of work, the pictures that were to become the book Rich and Poor—at that point, really, it was a project I was doing to try to get myself into graduate school. I’d been taking pictures of people living in transient hotels in the Mission District, putting them into a hotel guest register book and asking the subjects to write about themselves next to the pictures. (Photographing the wealthy and asking them to do the same thing came a bit later.) The great photography curator Philip Brookman, who was then at the Sesnon Art Gallery at UC Santa Cruz, put me in an exhibit there in 1979. He was close to Robert (Robert’s son, Pablo, who suffered from schizophrenia, had stayed with Philip in Santa Cruz when he was deeply troubled, obsessed with UFOs.) He put me in touch with Robert, and that’s how we started writing. I had no idea that what I was doing then—taking pictures of people, becoming involved in their lives, asking them to join in the work by writing about themselves, often on the image itself—would become a working methodology for my whole career. 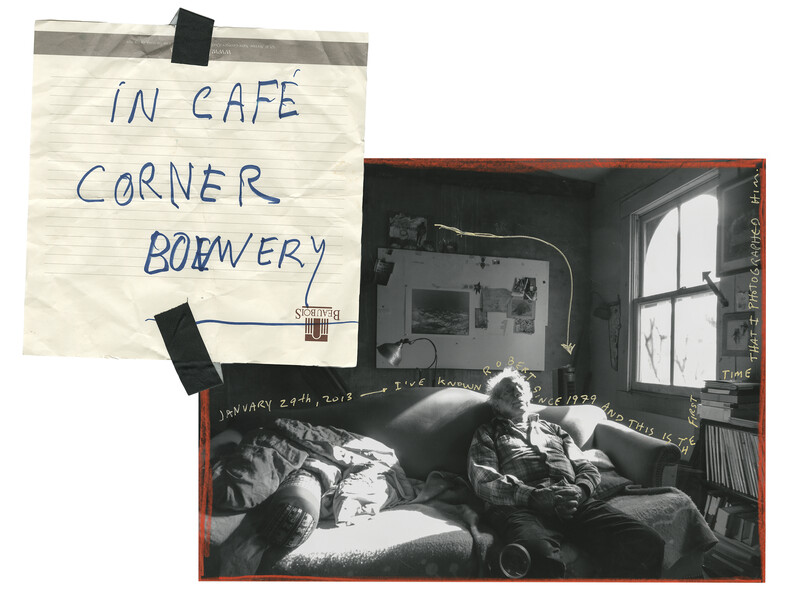 I was very nervous writing to him the first time. I wasn’t confident yet in what I was doing, and you have to remember that in those years The Americans, his masterwork, was finally finding the audience it deserved and being seen as a landmark. When it first came out in the states in 1959, it hit so close to the bone that America wasn’t ready to see itself in the mirror that way yet, at least most people weren’t. It punched them right in the gut—what wasn’t being seen, even though it was right before their eyes. But Robert saw it all, saw his newly adopted country with crystal clarity. Then, in the wake of the Vietnam War and Watergate, the curtains were pulled apart and the light came in and it was finally possible to see how worn and dirty the fabric was. The Americans spoke directly to the heart of the way everyone was feeling then.

I don’t know why he took the time to respond to my letters back then. It might have been because, looking at my work and reading the letters, he sensed that I had a kind of intuition and a curiosity about people that—if you’re lucky—can lead to a sense of poetry. And he had that poetry, in spades. Maybe he felt a sense of simpatico with a young kid who didn’t yet have much work to show. In a sense, I was embracing what was in the air at the time, and it was air he was breathing, too. In his letters, it was like he put his arm around me, at a time when I was getting some attention but also being hammered by traditional critics for despoiling photography by adding things to the image—having people write on it, bringing other things into it from the world, not allowing the viewer to keep pretending that it was so pure. Especially at the beginning, Robert would refer to me as being like a son, which troubled me, because I didn’t know how to deal with that kind of responsibility or understand how to play that imagined role in his life.

‘He might look at something of mine and say that he liked it or say, ‘Hmm, Jim, I don’t know, that might be shit.’ But mostly we would just talk about being human and about family and losing family and being sick of goodbyes.’

After we met, I would see him every time I went to New York—every time. It became a ritual. Sometimes I’d see him for an hour, and sometimes I’d spend the whole afternoon or morning or night. Sometimes we’d meet in a café around the corner, but almost always it was at his house on Bleecker Street, where each floor had a different purpose—Robert’s little office at the top, his wife June Leaf’s amazing studio below, the hallways piled with 16mm film reels, tchotchkes and homemade shrines, countless memories of lives lived. It was very affecting for me as a young artist to see that he truly lived as he believed, in an incredibly unmaterialistic way, to a degree that most other people—I include myself among them—would not have been able to sustain.

Our visits were easy. We were comfortable around each other. We might talk about making work. He might look at something of mine and say that he liked it or say, ‘Hmm, Jim, I don’t know, that might be shit.’ But mostly we would just talk about being human and about family and losing family and being sick of goodbyes. And I was very lucky in that way, because all of Robert’s friends knew how brusque and harsh he could be with people around him if he felt that he didn’t have enough time for himself. He could cut you off or cut you out. 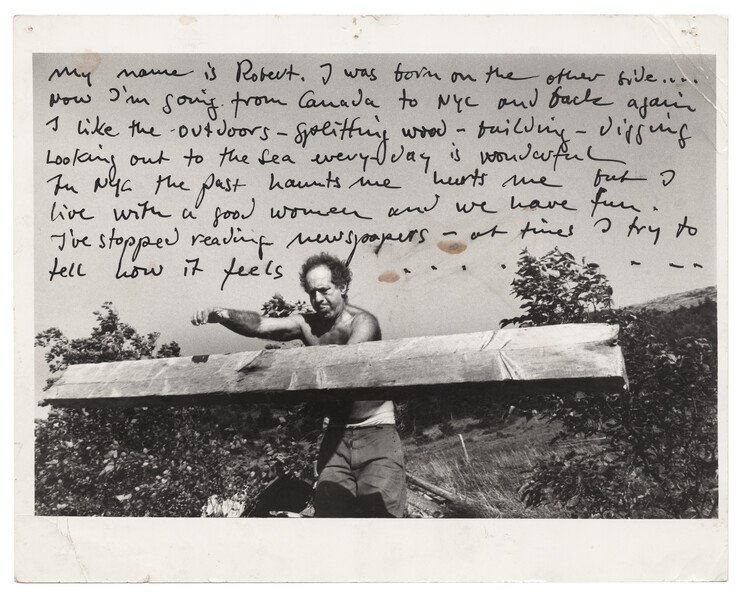 I think this came about in part because he became so famous, so intensely revered. Complete strangers knocked on his door and called him every day, just to get to get a peek of him or hear him speak. There were piles of books and portfolios that people had sent him stacked on the floor. I remember a Swedish couple who came by to visit him at Bleecker Street once when I was there. He left the room and one of them got up and followed him. Robert returned and yelled: ‘Why, goddamn it, do I have to be watched when I’m just taking a piss? I want to be on my own. Leave me alone!’ He could be like that, and he knew that it was not his best quality. But then again, he had every right to feel that way.

I think he feared being stuck in the role of sage and historical figure instead of living, breathing, working artist. June had a softening effect on him. It took me time to understand how special their relationship was. He was kind in his own way, but she made him realize that he could be thoughtful, as she was thoughtful, and I appreciated that as a model for my own life. Robert certainly taught me things about how to live—one of them being not to complain about money, about not being able to make enough of it. He didn’t want to hear it. If I was seeing him, then I obviously had at least enough money to fly to New York, and I should shut the fuck up.

In the late ’80s and early ’90s, when I was working on my project Raised by Wolves, during which I spent years following the lives of street kids in Los Angeles and the Bay Area, I would send Robert maquettes. They were little accordion-folded books made with cheap drugstore prints of what I was seeing and doing. He never really said much about them, but I was happy just knowing he was looking at them. At some point, we both also began to work in Polaroid—in part because Polaroid is so instantaneous, and you can give it to the person you’re taking a picture of, and you can experience it together as a physical object in the world.

‘Robert appreciated the appeal of accidents more and more, lines and chemical marks on the photo or overexposing it, the impermanence when things rip or break and that it’s okay. I think it gave him a way to play.’

Robert was a highly trained craftsperson. He was Swiss, for god’s sake. He knew exactly how to take a good, professional picture. I, on the other hand, was completely untrained, which I suppose gave me the opportunity (when I was lucky) to make mistakes or have accidents that would lead to something unexpected. I think Robert appreciated the appeal of accidents more and more, lines and chemical marks on the photo or overexposing it, the impermanence when things rip or break and that it’s okay. I think it gave him a way to play.

Over the last 15 years or so, he stopped writing me as often. He was in his 80s, and I think he realized there wasn’t as much that he wanted to say. During our last visits, he’d sometimes let me take his picture, or we’d take a picture together. In the early days, we didn’t do that and I never asked him, because he was there with me, so why would I feel the need to make pictures? But as he got older, maybe he began to sense the time growing shorter so we would make a record of it. Or he would look through his own pictures and postcards and talk about people from his life. His mind would go ranging into the past, and sometimes I wouldn’t know where he was. I’ve never done anything with the pictures I’ve taken of him because I don’t know how to think about them. I’m still not sure if I see them as work or as pictures I can evaluate, because they seem more like just another way we talked.

One of the great regrets in my life is that my correspondence with Robert is lost, gone for good. I’m somebody who keeps everything he’s ever written and everything ever written to him. At a certain point, it was adding up to boxes upon boxes, so a few years ago I put it all in a storage area in my apartment building in San Francisco, and one day the landlord threw it out. It was devastating. It’s still hard for me to put into words. It was like losing the lives of people I’ve been close with, Robert among them. So now I’m left trying to reconstruct so many of those letters in my head, wishing I could go back to them to hear our conversations from all of those years. 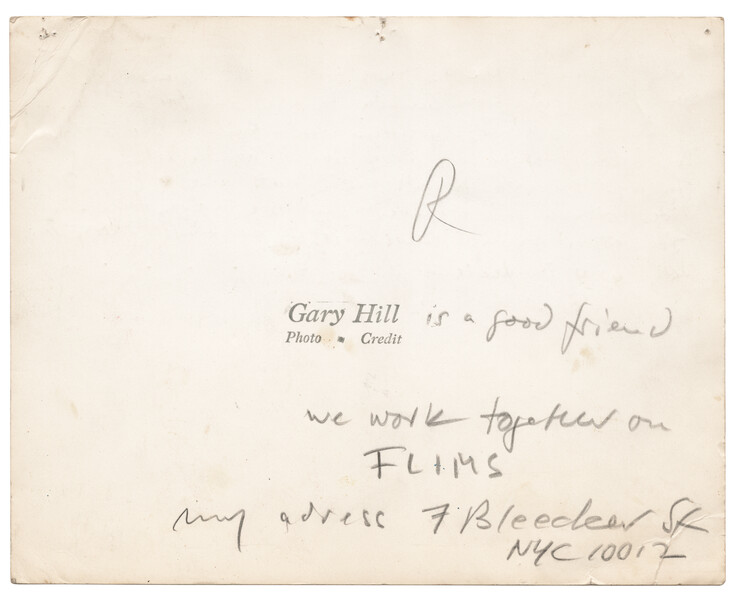 The last time I saw Robert was in January, on Bleecker Street. I bought him some nice oranges and cookies. We didn’t talk much. At a certain point, I picked up my camera, and he took it from me and took my picture. Then I pointed it back at him. He just stared into the camera for a long time, without moving. When I was finished, he smiled at me and clapped.

Jim Goldberg’s innovative use of image and text have made him a widely influential artist and artist’s bookmaker. His projects include Rich and Poor (1977–85), Raised by Wolves (1985–95), Nursing Home (1986), Coming and Going (1996–present), Open See (2003–09), The Last Son (2016), Candy (2013–17), Darrell & Patricia (2018) and Gene (2018). His work is in the collections of MoMA, SFMOMA, the Whitney Museum of American Art, the Getty, and LACMA. He is the recipient of three National Endowment for the Arts Fellowships, a Guggenheim Fellowship, the Henri Cartier-Bresson Award, and the Deutsche Börse Photography Prize. Goldberg is professor emeritus at the California College of the Arts.

Bibliotheca Hermetica: Mario Diacono and the arts of alchemy

Graveside with Scott Covert: Painter of the dead