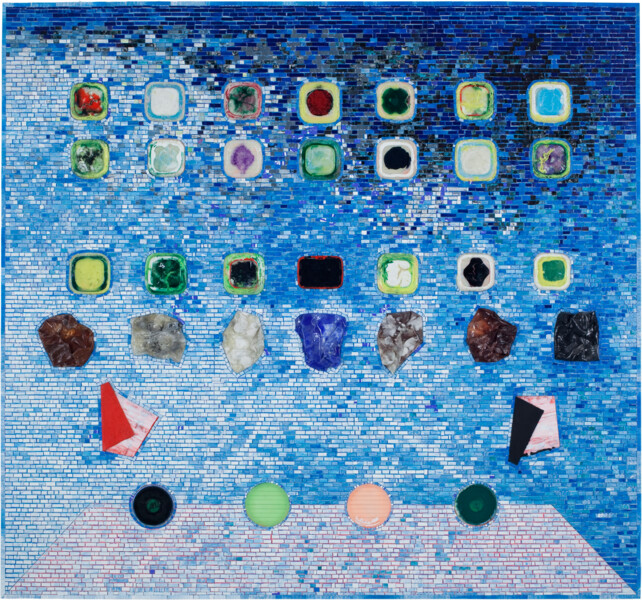 In 2011, Jack Whitten created a work that serves as a reflection of the political climate and a testament to the brilliance of his experimentation with material and representation. ‘Apps for Obama’ is an ‘acrylic collage’, featuring the artist’s distinctive mosaic tesserae on a surface of fluctuating blue hues. The artwork is grounded in the presence of materiality, and is characteristic of Whitten’s ongoing exploration of the technological dimension and the visuality of pixels. An abstract rendering of a smartphone screen, Whitten uses apps as a ‘symbol… something everybody can relate to.’

‘My ‘Apps for Obama’ is a bright and cheerful painting that nonetheless features the debris of our age as attractive on a digital screen: an interface that fluctuates between imaging and materiality, but above all else is paint.’—Jack Whitten

Jack Whitten on ‘Apps for Obama’

The Greco-Roman process of tesserae demands time. Whitten described his as a three-fold course, beginning with the construction of acrylic slabs, which are built up, frozen and then shattered with a hammer. The mosaic, glass-like pieces are then painted and laminated. Whitten began this practice as early as 1985, in the work ‘Norman Lewis Triptych I’—a homage to the late scholar and painter. The artist commented on the longevity of this evolved practice, how ‘the longest part is the building of the tesserae. That could take months, a year, even longer… It’s like Chinese cooking—when you have all the elements, it’s like a nonstop.’

‘Apps for Obama’ is currently on display as part of ‘Jack’s Jacks’ at Hamburger Bahnhof – Museum für Gegenwart in Berlin. The exhibition is the first of its kind by the artist in a European institution, and traces five decades of Whitten’s innovative work. It draws on the artist’s dedications to key cultural and political figures, which span from Arshile Gorky to Martin Luther King, Prince and Mohammed Ali. ‘Apps for Obama’ can be viewed alongside Whitten’s tributes, as he addresses the 44th President of the United States and his place within the history of African American representation. These contexts are essential to understanding Whitten’s work, yet conceptual dialogues, for the artist, must first and foremost be translated using the tools of materiality and abstraction. As Whitten says, ‘paintings are pure acrylic paint… I deal with the conceptual at its simplest level’.

‘Jack’s Jacks’ is on view at Hamburger Bahnhof – Museum für Gegenwart in Berlin from 29 March – 1 September 2019.

Jack Whitten: In the Studio

I Am Spirit: Reading Jack Whitten