Prudence and Alexandra Fairweather sit down with Amanda Stoffel Mitnick 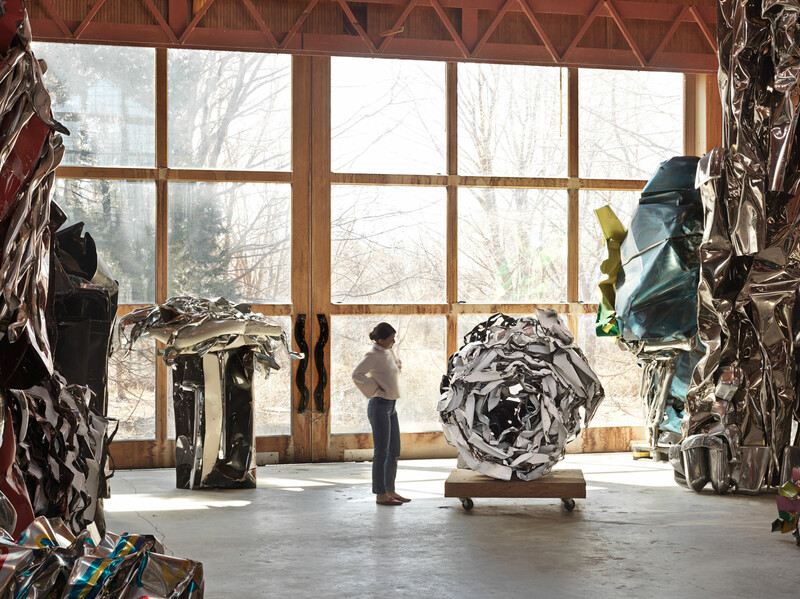 Los Angeles Director Amanda Stoffel Mitnick visited John Chamberlain’s home and studio on Shelter Island to sit down with the late artist’s wife Prudence and her daughter Alexandra Fairweather. Among mountains of metals, twisted foil maquettes, letters strewn on his untouched desk, and walls inundated with his own photography, they discussed the sculptor and their lives on the island.

Prudence Fairweather: My family’s origins date back to Shelter Island’s ﬁrst family, arriving in 1652, but I was completely surprised when Chamberlain told me he found our future home on the island. At the time, we were living at the de Kooning house in East Hampton—I remember I was at Dan Flavin’s office working when Chamberlain called me and said, ‘I found our new home. I’m coming to pick you up and show it to you.’ Not knowing where we were going, we drove up to the Shelter Island ferry. Chamberlain took me to a 1902 house on Dering Harbor with one of the longest docks on the island.

Alexandra Fairweather: I remember Chamberlain loved sailing so much that he said that the back of the house, with the dock, was the front of the house. In an ideal world, I think he wanted everyone to arrive at the house by boat.

AF: When we were here, Chamberlain would sit at the kitchen table for breakfast. He loved grapefruit and burnt toast with apricot jam. He would then read a thick book for a few hours. He loved to read biographies. A few of his favorite historical ﬁgures were Winston Churchill, Franklin Roosevelt, Nikola Tesla, and van Gogh.

PF: When we were in New York City, Chamberlain loved to have breakfast meetings at 8 AM at the Pembroke Room at the Lowell Hotel. It was his idea of a power breakfast.

AF: Chamberlain is known as a man who lived life to the fullest, someone whose personality was as expressive as his art. A man who was a giant among men. This same man showed me a world that lacks convention and is ﬁlled with eccentric creativity. There are too many fond memories to select just one, but one that is particularly sentimental was when I was little—Chamberlain would put me to bed by playing his harmonica to Stevie Wonder’s Isn’t She Lovely as he tucked me in.

ASM: Did Chamberlain have any interesting or strange rituals while working?

AF: It was important that music be playing at all times at the studio. This was true for our home across the street as well. Even if we were out running around or out of town on a trip, the music had to stay on. We always had jazz and classical music playing throughout. Music was a constant thread throughout his life. At age 12, when Chamberlain heard Schubert’s Ave Maria on the radio, he knew he wanted to be an artist… he knew he wanted to go out there in the world and do something that would make your heart beat. 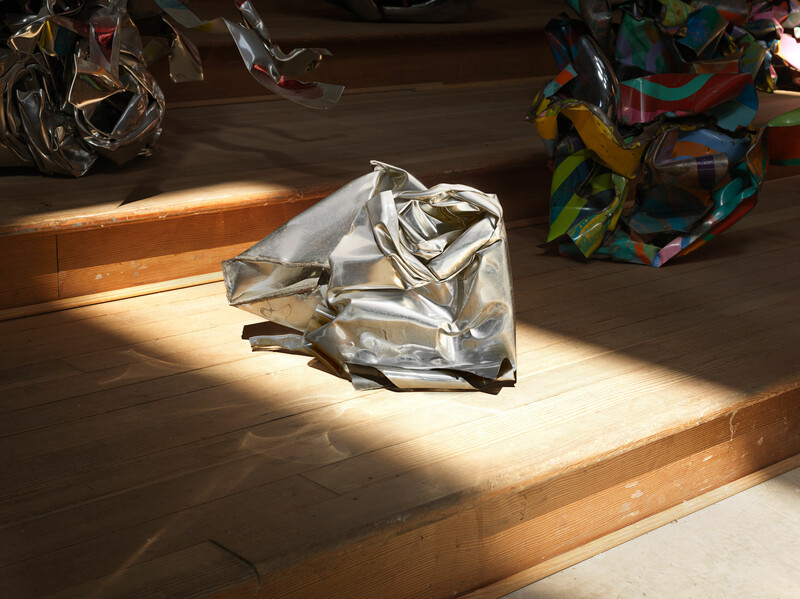 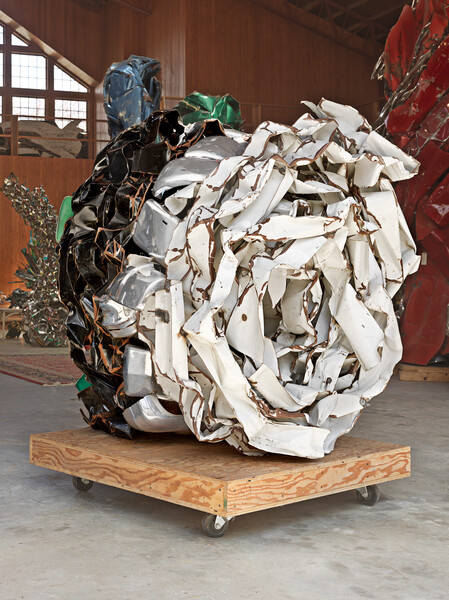 PF: Not necessarily while he was working, however, he would often take three bow ties and wad them into one. He was twisting and wadding even while he was styling his look for the day. It was a cool look, as one would imagine with his understanding of color. He was deﬁnitely a sharp dresser.

ASM: I love the three bow ties. What three things did Chamberlain often carry with him? Or have with him in the studio.

AF: His black Borsalino hat, a Widelux camera and sudokus. Chamberlain was fascinated by numbers; in particular, he was inﬂuenced by Tesla’s theories on numbers. Chamberlain also had his favorite chair… he often sat in a red Gaetano ‘Rag Chair,’ which was given to him as a gift.

ASM: Could you share a memory of Chamberlain discovering and choosing materials with which to work?

AF: I remember sitting in the kitchen here with Chamberlain when he heard about a ﬁeld of abandoned automobiles in a forest in Europe. The cars were classic antiques from the 1940s to the 1960s. Chamberlain was ecstatic! These pieces went on to become Chamberlain’s monumental later works. On a separate but related occasion, Chamberlain and I were having coffee in Zurich and as a journalist was interviewing him, he mentioned how he was the ﬁrst ‘recyclist.’ And after thinking about all of those automobiles, left to deteriorate in those ﬁelds, and how he transformed them into spectacular masterpieces, I realized he absolutely was in many respects a ‘recyclist.’

PF: Chamberlain could make anything into art, whether it be cigarette boxes, paper napkins, laundry, or aluminum foil.

ASM: What was his creative process and methodology like? How much did he plan before going to work on a piece?

PF: Even though Chamberlain rarely sketched or modeled his sculptures before making them, while traveling, he would often paint and draw in sketchbooks.

AF: Chamberlain twisted, wadded, and collaged his materials on the ﬂy, an approach not unlike that of his friend, Franz Kline. While Chamberlain was not bound by one type of material, a consistent tenet permeated: ‘it’s all in the ﬁt.’

ASM: I see there are mountains of Chamberlain’s correspondence in the archives. What is your favorite or most surprising letter or piece of writing you came across?

AF: There are too many great ones to select just one! However, we recently came across Chamberlain’s poems at Black Mountain College, and they are fantastic! Even though his career as an artist hadn’t even begun yet, you get a sense that he knew he was going to have a place in art history. The poems are remarkably prescient. I have to admit I got goosebumps. The poems possess conﬁdence and, of course, wit. Julie Sylvester is actually currently working on a publication of Chamberlain’s poems—I think these poems will be an exciting new lens through which to view Chamberlain’s work as well as his infamous titles.

PF: All the love letters, including ones to me, but I’m keeping mum for now… you will have to wait for Chamberlain’s biography or biopic to get all of the details.

ASM: I read in a 1972 interview Chamberlain said, ‘I never thought of sculpture without color.’ He was
an extraordinary colorist. How did you observe his relationship to color?

PF: As initially observed by Donald Judd, Chamberlain revolutionized sculpture by using color. He completely redeﬁned what sculpture was and could be. It is very important to note that Chamberlain did not add paint after a work was assembled. Rather, color was applied to the materials directly.

AF: When it comes to Chamberlain’s use of color, I ﬁnd there’s an intriguing connection between Chamberlain and Rothko that requires further evaluation. Rothko believed that art had the capacity to evoke a transcendent experience in the viewer. Chamberlain shared a similar view, describing the experience as ‘the presentation of unprecedented information’ and ‘the last place of self-discovery.’ While both artists shied away from describing their work, fearing that words would only limit the viewer’s mind and imagination, in both cases, the selected colors seem to present a particular humanistic attitude.

ASM: How did Chamberlain feel about technology and the use of computers in visual arts? He utilized Photoshop in the later photo collages installed here at the house—did he wrestle with it or embrace it?

AF: Chamberlain seemed frustrated that technology had not progressed to where he wanted it to be in his lifetime. He was excited by technology and the innovations it leads to, and always seemed to be a few steps ahead of current technological advances. I recently stumbled upon some documents in the archives from 1980 that reveal how excited Chamberlain was about the new Apple computer. It said he believed ‘this could act as a ﬁling cabinet for all the data that [he] now has in his head.’ He asked Heiner Friedrich and Philippa de Menil to purchase one for him, and requested, ‘a sophisticated input capacity—which means it could take voice, typed and videotaped images, etc. It would store all of these and call up information when desired.’ When Chamberlain was in his 70s, he took his photographs and began to manipulate them using Photoshop. These works ultimately became beautiful collages of his photographs—he referred to them as inks on canvases. 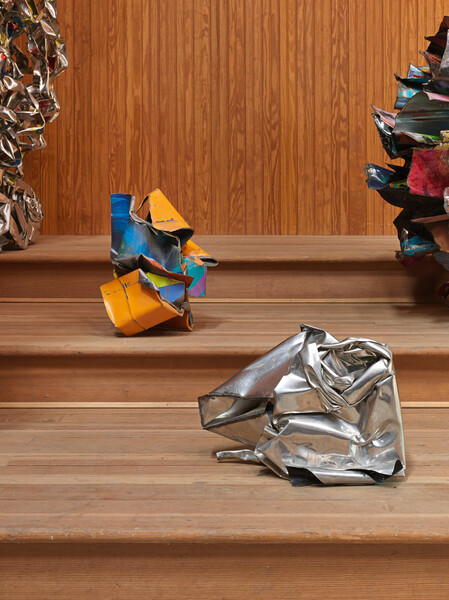 ASM: Speaking of photographs… Chamberlain photographed himself throughout his life. What is he doing in your favorite self-portrait?

AF: He is in St. Moritz, wearing his black Borsalino hat. The sky is a bright blue and an eagle is ﬂying above.

PF: There’s one he shot in the Hôtel Lutetia in Paris. Chamberlain is taking a self-portrait by shooting into a mirror, resulting in multiple images of himself.

ASM: One ﬁnal and very important question. What was his drink of choice?

AF: Martinis with two olives. It was very important that the martini include two olives. He would say, ‘It’s like breasts… you want two, not one, nor three.’

PF: Chamberlain got me into Hendricks…

Three works by John Chamberlain, including the cosmic sculpture ‘COMEOVER’ (2007) from the Wheels series, will feature in Hauser & Wirth’s presentation at Art Basel, from 13 – 16 June 2019.