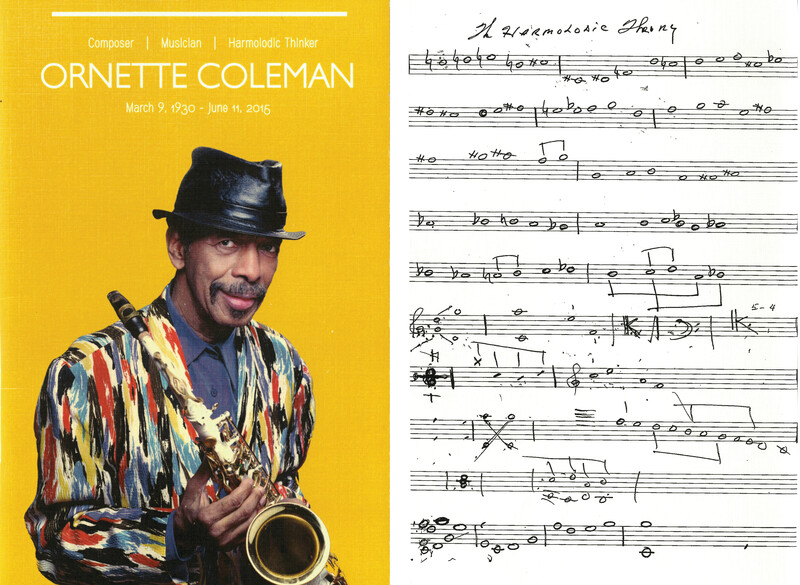 For the first time in 45 years, venerated American artist David Hammons will present an exhibition in Los Angeles, opening 18 May 2019 at Hauser & Wirth. The artist has dedicated this exhibition, the largest of his career, to legendary musician Ornette Coleman—jazz saxophonist, violinist, trumpeter, and composer—a founder of free jazz.

‘Follow the idea, not the sound.’ This statement by Ornette Coleman is an inspiration for David Hammons who reflects, ‘I was impressed with that. Follow how my ideas are put together, as opposed to whether the rainbow appears or the rain comes. I use this logic a lot. It moves in the realm of poetry as opposed to the actuality that people are used to or expect.’

On the occasion of this landmark exhibition and dedication, read below the tribute to harmolodic thinker Ornette Coleman from his passing on 11 June 2015. To commemorate the legendary jazz pioneer, Hammons and Song X Records have published a limited edition box set, ‘Celebrate Ornette’ (2019), with all proceeds going directly to the family of Ornette Coleman. Editions 1 through 50, signed by David Hammons, are now available to purchase.

Rarely does one individual change the way we listen to music, but such an artist is Ornette Coleman. Since the late 1950s, when he burst on the jazz scene with his legendary engagement at New York’s Five Spot, Ornette has been teaching the world new ways of hearing sound. His revolutionary musical ideas have been controversial, but today his enormous contribution to modern music is recognized throughout the world.

Born in segregated Fort Worth, Texas in 1930, Ornette taught himself to play the saxophone and by the age of 14 had formed his own band. With the release of his debut album, ‘Something Else’ in 1958, it was immediately clear that Ornette had ushered in a new sonic and rhythmic era, he would eventually term Harmolodic. Freed from the prevailing conventions of harmony, rhythm, and melody, Ornette along with core musical partners, trumpeter, Don Cherry, double bass player Charlie Haden, and drummer Billy Higgins, transformed jazz. In more than twenty critically acclaimed albums released from 1959 through the rest of the ‘60s on the Atlantic and Blue Note labels, most of which are now recognized as jazz classics, Ornette set creative templates that are still regarded as touchstones.

‘I really think that when that day will come where the categories of sound will not involve any race but just the sound itself, that is going to be a beautiful moment.’ —Ornette Coleman

Ornette was married to poet and activist Jayne Cortez for 10 years. Their son, Denardo, made his much-discussed recording debut at just 10 years old, drumming on his father’s 1966 opus, ‘The Empty Foxhole’. Ornette’s unusual choice was reflective of his ever experimental nature and approach. He sought to expand his own musicianship, and soon began playing the trumpet and violin. Expanding the scope of his always prolific composition, he scored string quartets, woodwind quintets and symphonic works. The realization of Ornette’s orchestral vision came with his 1972 recordings of ‘Skies of America’ symphony with the London Philharmonic Orchestra, released on Columbia. 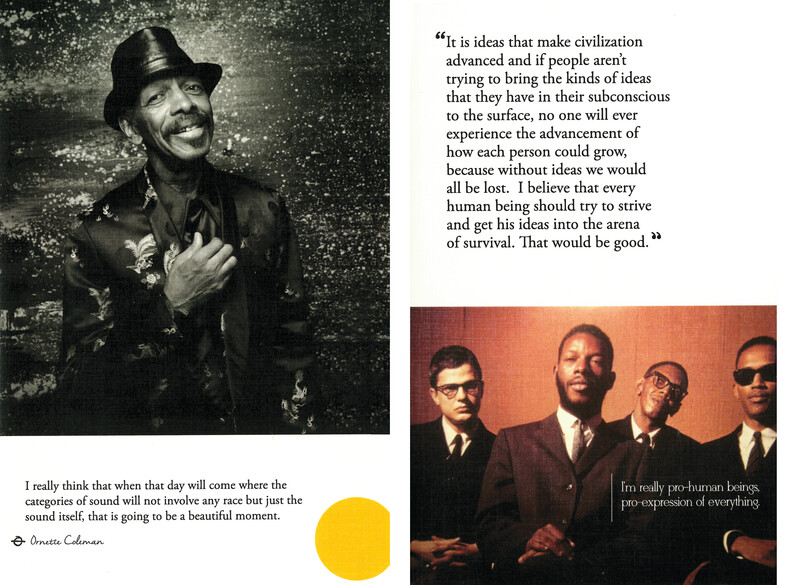 Seeking to absorb sounds unfamiliar in America, Coleman went to Africa in 1973. He played in remote Moroccan mountain villages with the ancestral healers, the Master Musicians of Joujouka. Next, he journeyed between villages in Nigeria, with its multiplicity of rhythms marking everyday life. The exposure inspired Ornette to create a new sound soon after his return to New York: a full frontal Harmolodic attack, a double whammy of drums and electric bass, that he dubbed Prime Time.

In the next decade, more surprises included provocative albums such as ‘Song X’ with guitarist Pat Metheny, and ‘Virgin Beauty’ featuring the late Grateful Dead leader, guitarist Jerry Garcia. Venturing into movies, Ornette’s soundtrack for the surreal guignol of ‘Naked Lunch,’ the film of the William Burroughs novel by David Croenberg, is shockingly vivid and evocative. In his youth, Ornette was much criticized, even scorned for his bold sound. But he went on to receive innumerable accolades. Significantly, he returned as a hero to his hometown of Fort Worth in 1983, receiving the key to the city — an emotional ceremony documented in Shirley Clark’s film, ‘Ornette: Made In America‘. New York City’s Lincoln Center Festival featured a four-day celebration of his music in 1997, including rare performances of his ‘Skies of America’ symphony with the New York Philharmonic.

His Harmolodic world was always growing, along with the ideas of an artist who could not be confined and was forever fresh.

At the University of Michigan in 2010, Ornette was awarded an Honorary Doctorate of Music; President Obama delivered the event’s Commencement Address.

The distinguished MacArthur Fellowship award came in 1994, and three years later, Ornette was inducted into the American Academy of Arts and Letters. Further acknowledgements include 2001’s prestigious Praemium Imperiale award from the Japanese government; the Pulitzer Prize for Music received for the album ‘Sound Grammar’ in 2007. In the same year, Ornette also received the Grammy Lifetime Achievement Award – to be followed in 2015 by the induction of 1959s ‘The Shape Of Jazz To Come’ into the Grammy Hall of Fame.

A metaphysician, philosopher and eternal student, Coleman continued to confound categorization. His Harmolodic world was always growing, along with the ideas of an artist who couId not be confined and was forever fresh. ‘Most people think of me only as a saxophonist and as a jazz artist,’ he once stated, ‘but I want to be considered as a composer who could cross over all the borders.’

The exhibition ‘David Hammons’ at Hauser & Wirth Los Angeles is dedicated to Ornette Coleman, 18 May – 11 August 2019.

To commemorate the legendary jazz pioneer, Hammons and Song X Records have published a limited edition box set, ‘Celebrate Ornette’ (2019), with all proceeds going directly to the family of Ornette Coleman. Editions 1 through 50, signed by David Hammons, are now available to purchase.