Inside the exhibition, Mark Wallinger introduces ‘Study for Self Reflection’ at Hauser & Wirth New York, 22nd Street. Featuring new paintings and two large-scale sculptures, the works on view extend Wallinger’s career-long engagement with ideas of power, authority, artifice, and illusion. The theme of reflection is central to Wallinger’s oeuvre; the artist deploys it to probe questions about the psyche and the self, and to challenge our attachment to our identities and the socio-cultural mechanisms that inform them. 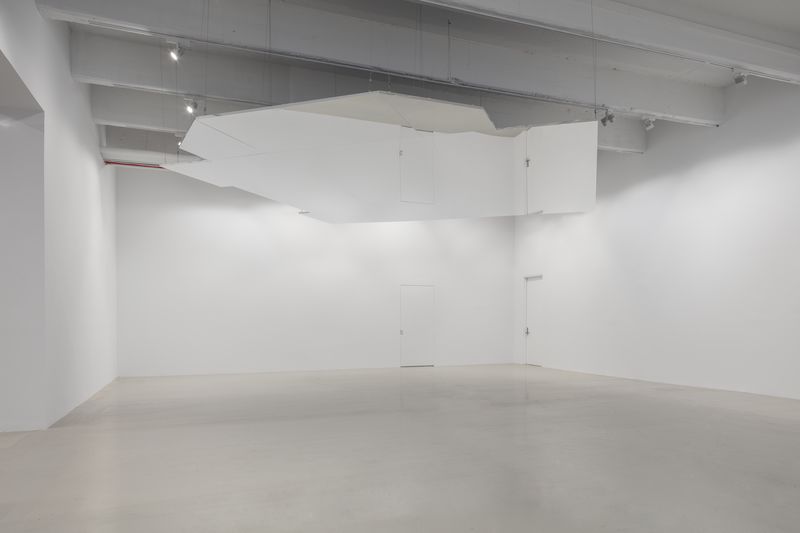 Moving through the gallery, viewers encounter ‘Self Reflection’ (2016) suspended from the ceiling. First exhibited at the final home of Sigmund Freud in London, ‘Self Reflection’ was originally installed in the psychoanalyst’s study, which houses all the books, objects, and furnishings, including the famous couch, that Freud brought with him when fleeing Vienna in 1938. Wallinger’s intervention effectively displaced each totem and object and doubled the space with unnerving clarity. For this exhibition, Wallinger has transplanted the artwork to the gallery, installing it at the exact height as the ceiling in Freud’s study and retaining the same orientation.

Through an adjacent doorway, visitors encounter Wallinger’s suite of new Mirror Paintings (2018). These works follow his earlier id Paintings (2015 – 16) and Self-Portrait series (2007 – 2015). The dimensions of these tactile canvases are based on the artist’s own height and arm-span. Through the use of silver paint applied with the artist’s hands in freeform gestures these new works represent a further fetishized encounter with the canvas. The memory of his touch is suspended in the substance of the paintings. Their surfaces are insistently sculptural, tracing his hand and fingerprints, asserting direct and immediate engagement. They also take on an unpredictable illusory quality as the material sets. This transformation infuses the paintings with ‘a quality of otherness,’ a sense of elusiveness that Wallinger likens to gazing through the surface of water. 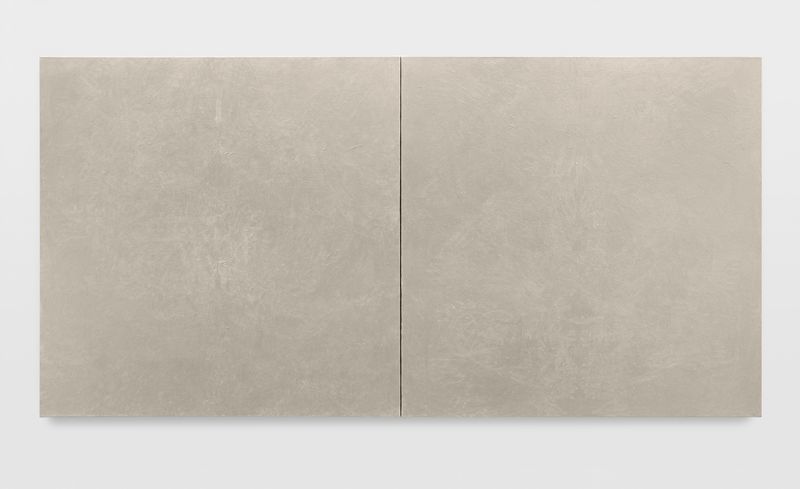 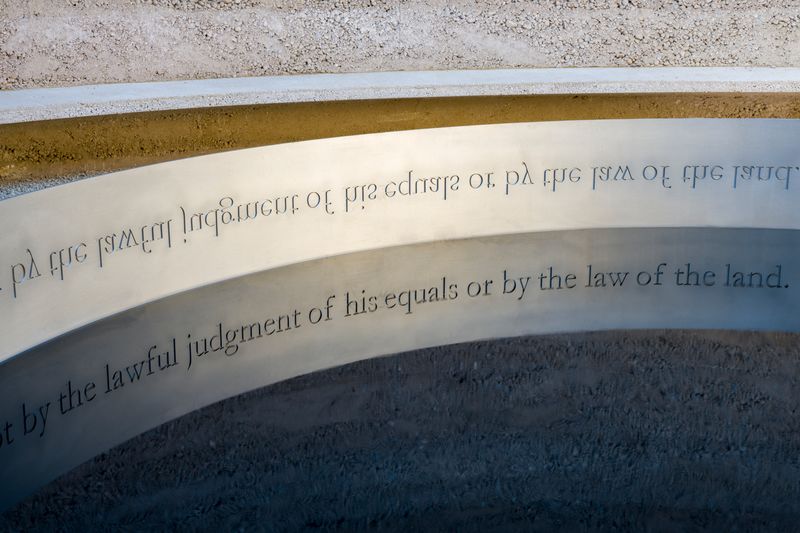 Accompanying these large-scale Mirror Paintings is a small black-and-white photograph of Claude Monet from 1904. In this self-portrait, the artist’s shadowy reflection appears to gaze back from the quiet depths of a lily pond, just out of reach, conjuring the myth of Narcissus within his most celebrated subject. The exhibition’s recurring theme of reflection and perception is also embodied in ‘Statue (Fragment)’ (2018), a bronze cast of Wallinger’s spectacles. Rendered opaque, the lenses suggest the gelid tribute of commemorative sculpture and recall ‘Blind Faith,’ the alter-ego Wallinger assumed in earlier works such as the Speaking in Tongues trilogy (1997 – 1999) and ‘Word in the Desert’ (2000).

Public works are an integral part of Wallinger’s practice and the gallery is pleased to exhibit a small-scale sculptural rendering of the focal point of his major architectural project ‘Writ in Water’ (2018). Commissioned by the National Trust and produced in collaboration with architects Studio Octopi, the work commemorates the 800th anniversary of the sealing of Magna Carta at Runnymede and draws inspiration from the fundamental principles of justice it embodies. Upon entering the installation, visitors navigate left or right around an outer passage that leads to a central chamber comprised of a circular pool of water beneath a wide oculus. Inscribed along the inner side of the pool is the reversed and inverted lettering of Clause 39 of Magna Carta, so that one reads the text reflected in the water. The clause is considered the basis of common law in Britain and the due process of law in the 5th Amendment: ‘No free man shall be seized or imprisoned, or stripped of his rights or possessions, or outlawed or exiled, or deprived of his standing in any way, nor will we proceed with force against him, or send others to do so, except by the lawful judgment of his equals or by the law of the land.’