Field of Dreams: The genius of the Dutch master plantsman Piet Oudolf is the creation of borders that unfurl and delight throughout the summer, finds Non Morris 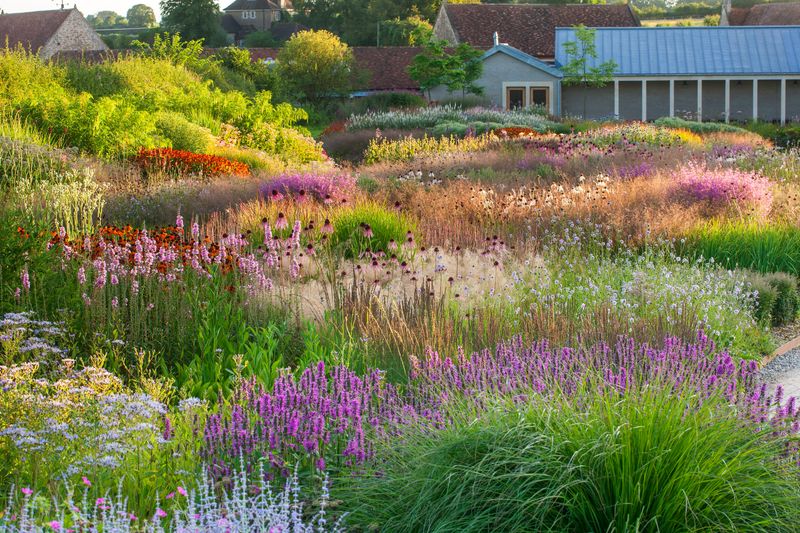 It was Piet Oudolf’s garden design for the 2011 Serpentine Pavilion in London that triggered a commission for a West Country contemporary art gallery that’s the brainchild of the internationally successful art dealers Iwan and Manuela Wirth. Mr Oudolf’s exhilarating planting for the High Line, which runs over Lower Manhattan and passes by Hauser & Wirth’s New York gallery, had already been much admired, but the draw and energy of his Serpentine garden led to the invitation to collaborate with architect Luis Laplace on the development of the new Hauser & Wirth gallery in Bruton, Somerset.

After 2014’s wettest winter on record, the gallery opened in the summer and its showpiece garden, the Oudolf Field, was revealed that September. Alice Workman, the director of the gallery, explains: ‘There were no set plans, but we knew we wanted Piet to create a garden.’ She introduced Mr Oudolf to Mr Laplace, collecting the latter from his Paris base and travelling together by train to Mr Oudolf’s home in Holland, where the relationship was cemented with long conversations over cheese sandwiches—which continued throughout the process. 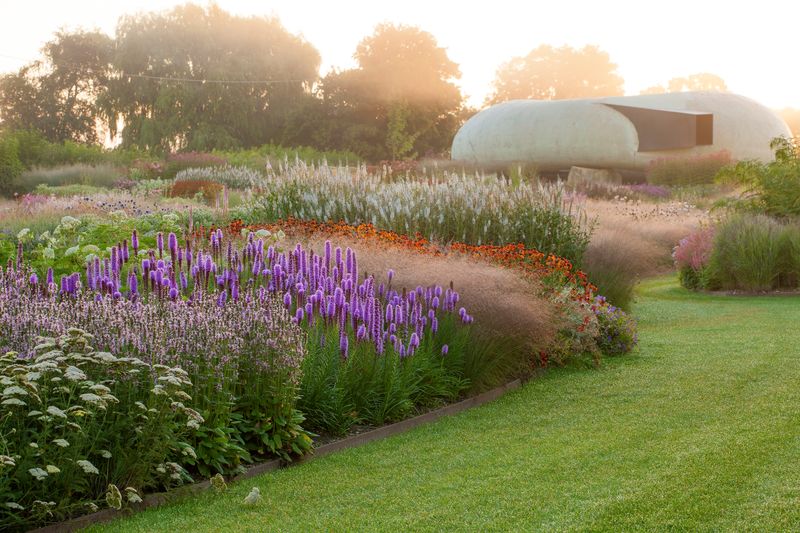 The task was to renovate and adapt the existing 18th-century Durslade farmhouse and its range of farm buildings—two of the gallery spaces are converted from existing barns and the buzzy Roth Bar & Grill has emerged from a 30-yard milking parlour. The brief for the farmyard entrance was to ‘keep the feeling it had always had’. The addition of a concrete plinth for exhibiting sculpture, partnered by a simple Oudolf border within a courtyard of handsome stone buildings, sets the tone.

When I visit, an uplifting, bright-red Alexander Calder piece, Knobs (1976), from this summer’s solo exhibition, is set against fresh green magnolia foliage and the softly aged roof tiles of the farm building beyond.

From this point on, sightings of the two main garden areas are carefully and tantalizingly curated. After making your way through the first three galleries, you arrive at the sheltered Cloister Courtyard. The planting here offers a subtly dynamic foil to artworks that have already included one of Louise Bourgeois’s giant bronze spiders. Four elegant paper mulberry trees (Broussonetia papyrifera) provide a light canopy and dazzling orange fruits later in the season and are sparingly underplanted with the hard-working grass Sesleria autumnalis, which is a milky green in spring, but luminous lime green in autumn.

There are occasional stands of the handsome perennial Kirengeshoma palmata, with their tiers of acer-like foliage followed by bell-shaped, pale-yellow flowers and the more fiery accent of Euphorbia griffithii Dixter, which has red-tinged dark-green leaves and bright orange-red flowers. The perennials are joined by exquisite bulbs: a lower tier of rich mauve Dodecatheon jeffreyi, the dazzling Nectaroscordum tripedale—which is noticeably taller than the generally seen Nectaroscordum siculum and has abundant clear pink-and-white flowers on catwalk-slender stems—and gorgeous groups of martagon lily to follow. 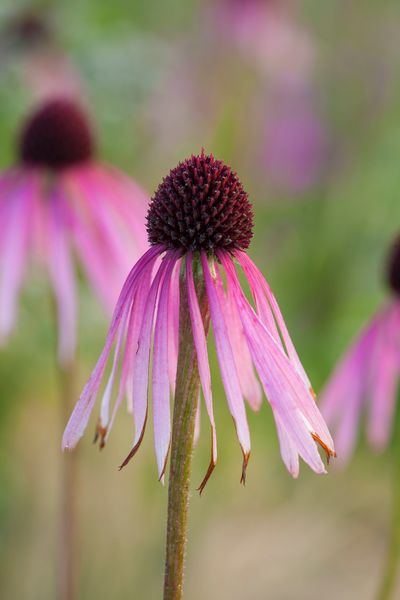 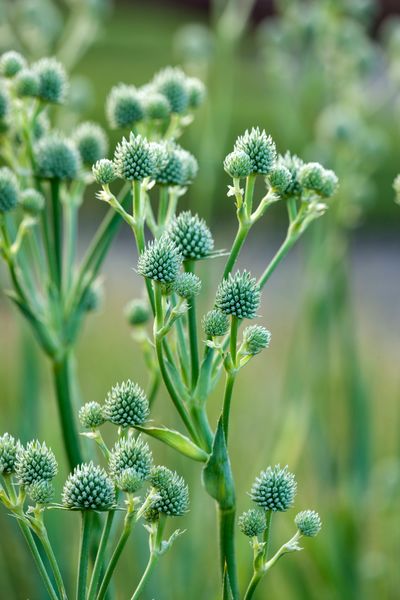 The visitor now enters a glazed lobby with a first glimpse of Oudolf Field. This is a celebratory 1½ acres of curving borders with interlocking waves of colour and delicately contrasting textures, through which winding paths lead you on and then dis-appear again as you advance.

‘We gave the field to Piet almost like a blank canvas, the same way we work with an artist,’ Mrs Workman tells me. ‘We gave him complete freedom. What he designed is what we built.’

Some 26,000 plants grown by Orchard Dene nursery in Oxfordshire were planted in the most gruelling conditions and a highly skilled gardener was sought to act as guardian to Mr Oudolf’s meticulously planned vision. ‘Mark Dumbleton [the head gardener] looks after it beautifully—it’s like his baby,’ says Mrs Workman, ‘and Piet reg-ularly visits to see the garden for himself.’

At the core of Mr Oudolf’s design is the toughest possible selection criteria for every plant on the list. They’re chosen for their form and for growing well, but not dominating, as well as for their longevity. Lychnis chalcedonica Rosea is a perfect example: it has slim domes of pale-pink flowers on stiff stems, its leaves flush gold in the autumn and then it holds its neat seedheads for a long time, providing an excellent rhythmic contrast to airier plants and grasses.

‘There are 3,000sq m [three-quarters of an acre] of flowerbeds in total. That’s a scary prospect,’ Mr Dumbleton tells me. ‘Nearly two miles of border, if the beds were one yard wide.’

Dividing the main swathes of planting are two groups of low-mounding grass ovals, a calming pause in the action. 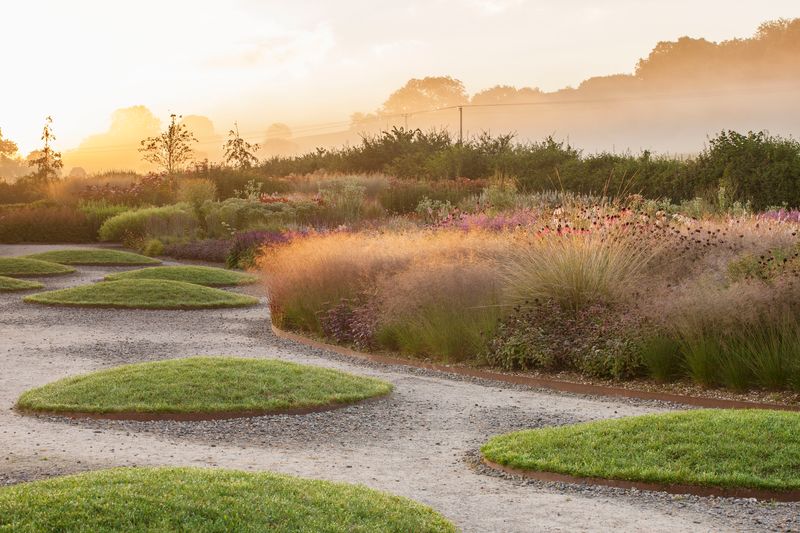 The outer borders act as a frame and are planted with taller plants, such as the graceful Molinia caerulea Transparent or the wonderful Datisca cannabina, with its graceful tassels of yellow flowers. Within this frame are seven borders, which are subtly block planted so that, at times, there seems to be a rhythmical display of velvety russet, with broad bands of Helenium Moerheim Beauty, for example. At other times, your eye might be drawn cleverly up the garden with a different variety of the same plant—the butter-yellow Achillea Hella Glashoff in the lower borders, perhaps, and the deeper yellow Achillea Credo higher up.

At the heart of Oudolf Field are the dreamy sporobolus meadows—three borders planted with the airy grass Sporobolus heterolepis, out of which emerge the tiny dotted accents of Dianthus carthusianorum seedheads or the delicate-pink Echinacea pallida, with petals like the narrowest shreds of torn silk, echoed further on by the even paler Echinacea pallida Hula Dancer. ‘It’s a beautiful way of planting, very forgiving. The grass has such tiny seedheads and a sweet caramel smell,’ says Mr Dumbleton, as smitten now as he was in 2014.

Unlike some public gardens that are designed to go full throttle from the word go, this is ‘genuinely seasonal’ and takes time to unfurl and stretch out into the summer and beyond. The Wirths are thrilled with this ‘continuing changing masterpiece’ and love the way its ‘wonderful combination of wilderness and calm never ceases to surprise us’. 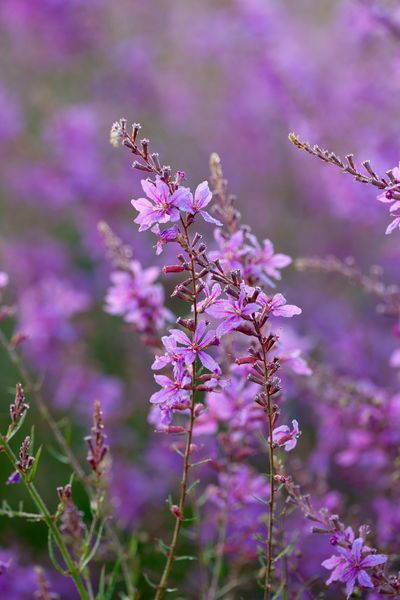