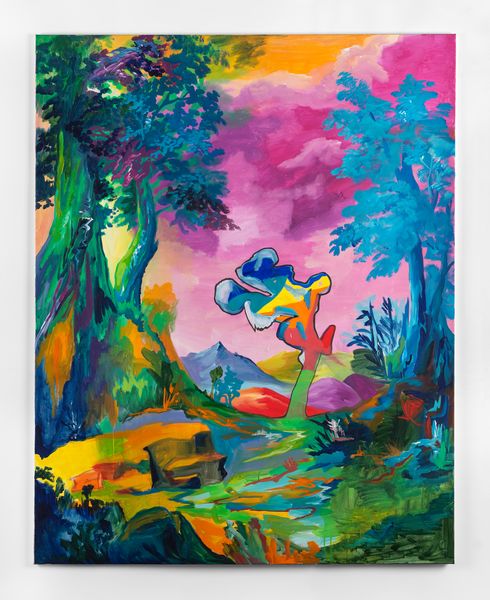 This resource has been produced to accompany the exhibition, ‘Djordje Ozbolt: Brave New World’, at Hauser & Wirth Somerset.

About Djordje Ozbolt
Djorde Ozbolt was born in Belgrade in Serbia in 1967 (at that time the country was known as Yugoslavia). He studied architecture at the University of Belgrade, Yugoslavia, from 1988 – 1991 before moving to the UK where he attended a Foundation course at Chelsea School of Art in 1995. Ozbolt then did a BA in Fine Art at the Slade School of Fine Art, 1996 – 2000 and followed this with an MA in Painting at the Royal Academy, 2003 – 2006. Ozbolt now lives and works in London.

Djordje Ozbolt was an artist in residence at Hauser & Wirth Somerset at The Maltings Studios in Bruton from May until November 2016. During this time he conceived all of the art work for this exhibition, as well as ‘The Grand Detour’ at The Holburne Museum, Bath (17 November 2016 – 5 March 2017). 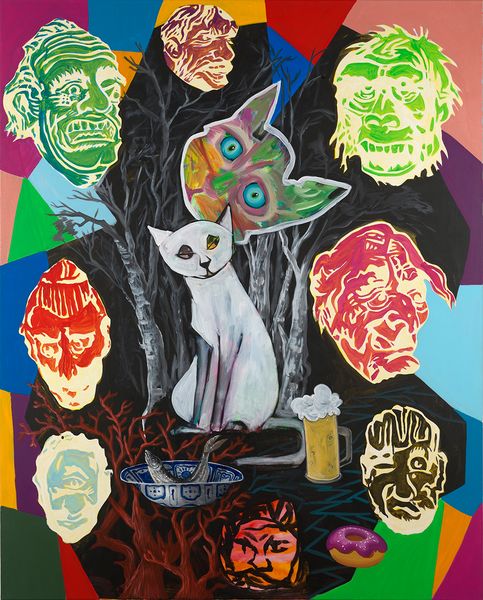 What inspires his work?
Djordje Ozbolt is inspired by everything that is around him. He is known for his playful reinterpretations of history, memory and contemporary society, creating a mixture of high and low culture and inviting viewers to look afresh at each reference. This exhibition reflects Ozbolt’s ongoing interests in combining canonical art historical motifs with cartoon imagery and kitsch.

Ozbolt is an avid traveller, including visits to India (where he lived) and Africa, and his work irreverently borrows from a plethora of cultures, traditions and curiosities. He grew up in former Yugoslavia where a series of ethnically-based wars and insurgencies were fought from 1991 to 2001. These wars lead to the breakup of the Yugoslav state when its constituent republics declared independence. He is now settled in London with his family.

Djordje Ozbolt cites Giorgio de Chirico and the Surrealists as influences on his work. De Chirico (1888 – 1978) was an Italian artist whose neoclassical style of painting influenced the Surrealists. Ozbolt also loves the work of Francis Picabia (1879 – 1953), who was a French avant-garde painter and poet who became one of the major figures of the Dada movement as well as the Russian painter and theoretician Kazimir Malevich (1878 – 1935) who was a pioneer of geometric abstract art and the originator of the avant-garde Suprematist movement.

What does his work look like?
In Ozbolt’s ‘Brave New World’, the visitor is sent on a journey in which they encounter a variety of landscapes populated by myriad characters and rituals, passing from one zone to the next as though on a quest for divine inspiration. The work includes painting on canvas, casting in resin, painting directly on the walls of the gallery, sourcing ready-mades and sculpting with remnants found in and nearby the studio.

His work is often playful and light hearted with deeper meaning that is only revealed upon closer inspection, and in this exhibition visitors are greeted by the figure of a leaping gnome, propelling himself from the roof at the entrance, with a mischievous smile on his face. The comic apparition takes inspiration from Yves Klein’s famous staged photograph, ‘Leap into the Void’, in which the artist was captured apparently diving to his death.

Ozbolt often renders his subjects figuratively upon a more experimental background. His landscapes often make reference to classical paintings and appear as theatrical backdrops for an unfolding action. 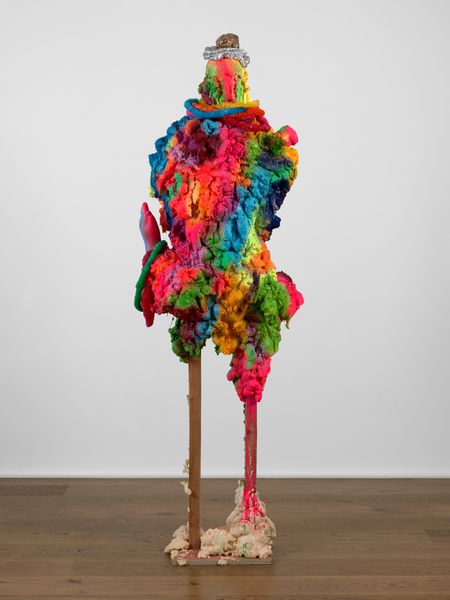 How does he title his work?
Ozbolt often starts a painting with a title which he may have picked up from an article that he has read or a conversation that he has had. He often has a sense of playfulness when he titles his work and the titles may make fun of or conceal his affection for the subjects that he references. Djordje also sometimes waits until a work is complete before he titles it, often waiting for that visceral reaction of the completed work to guide him towards a title.

This exhibition title ‘Brave New World’ borrows its name from the 1932 science fiction classic by Aldous Huxley, and is a reminder of the renowned line spoken by Miranda in Shakespeare’s The Tempest, ‘O brave new world, that has such people in’t!’.

What are his main themes?
Despite the light hearted and fun motifs that Ozbolt often employs in his work, there is also a more serious and considered undertone. In this exhibition, the artist has created a sculpture representing a way-finding sign, similar to those encountered on rural hikes stating the distance you are from significant popular landmarks. Here the signpost is used by the artist to invite the viewer into   his imagination and to places of personal significance by directing them to the paintings on the surrounding walls, while each sign carries the title of the artwork it points to.

Kitsch
This exhibition demonstrates Ozbolt’s interest in playing with and subverting images from popular culture such as the garden gnomes and cartoon characters. Kitsch is a low-brow style of mass- produced art or design using popular or cultural icons.

To brand visual art as ‘kitsch’ is generally pejorative, as it implies that the work in question is gaudy, or that it deserves a solely ornamental and decorative purpose rather than amounting to a work of true artistic merit.

Subverting Art History
Ozbolt has an ongoing interest in combining canonical art historical motifs with cartoon imagery and kitsch to redefine and challenge by association and placement what we denigrate as low brow and popularist as opposed to high brow and elitist. 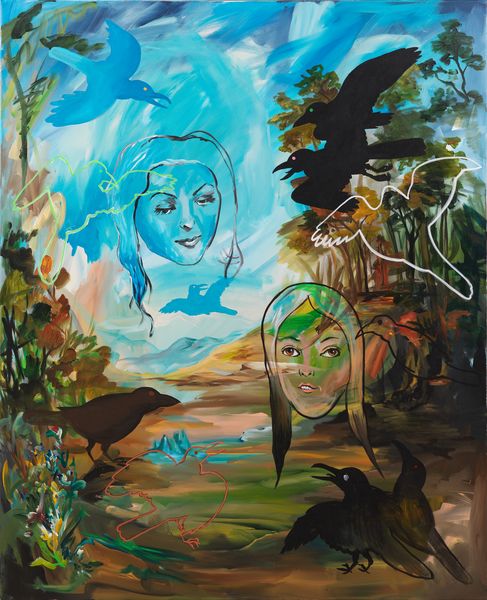 People and Place
Across the farmyard, a trail of brightly painted garden gnomes parade in single file straight up to the glass doors of The Threshing Barn. The gnomes were produced in Ozbolt’s home country, Serbia, and the work touches on notions of mass migration and displacement.

In the Pigsty gallery Ozbolt has created a dramatic jungle landscape painted on site; he has transformed what was once a bright space into a dense mass of foliage. In the centre of the space there is a table presenting 90 cast resin figures stand alert – the original figures from which they were cast stem from a wide range of contexts such as German folklore, African tribal art and Oceanic artefacts. The multicultural chorus, each looking outwards to face the jungle, represent a microcosm of the world’s diversity, united in their search for meaning.

How does he make his work?
Ozbolt likes to work quickly because he finds he can better work things out and open up new directions that were not planned. He believes that if he were to plan too much then his work would become more conceptual and less responsive to his subconscious and open to experimentation. Sometimes he just likes to start a painting or sculpture with no particular idea in his head and to see where it takes him. However, even if he does have a fixed idea by the time the painting is complete it is rarely what he anticipated.

Like many young artists, Ozbolt began working on quite small scale paintings due to the cost of canvases. As his career has developed his work has become larger in scale, which he states presents a greater challenge, but also because he believes not all subjects work well on a small scale.

The sculpture ‘Tree of Life’ (2016) is made from assembled found articles and is an example of the appeal Ozbolt finds in using non-traditional materials. Working intuitively, Ozbolt gathered readily available items so that the sculpture and the ideas behind it developed within the process of making.

What other artist’s work does it relate to?
Subodh Gupta (born in 1964) is an Indian Contemporary artist based in New Delhi who is  friends with Ozbolt. Trained as a painter, he went on to experiment with a variety of media. His work encompasses sculpture, installation, painting, photography, performance and video. Learn more about this artist here

Paul McCarthy (born 1945) is a contemporary artist who lives and works in Los Angeles, California. Originally formally trained as a painter, McCarthy’s main interest lies in everyday activities and the mess created by them. McCarthy works primarily in video and sculpture. Learn more about this artist here

Phyllida Barlow (born 1944) is a British sculptor best known for her colossal sculptural projects  in  which she uses inexpensive materials such as plywood, cardboard, plaster, cement,  fabric  and  paint.  Barlow’s practice is grounded in an anti-monumental tradition characterised  by  her  physical  experience  of handling materials, which she transforms through processes of layering, accumulation and juxtaposition. Learn more about this artist here 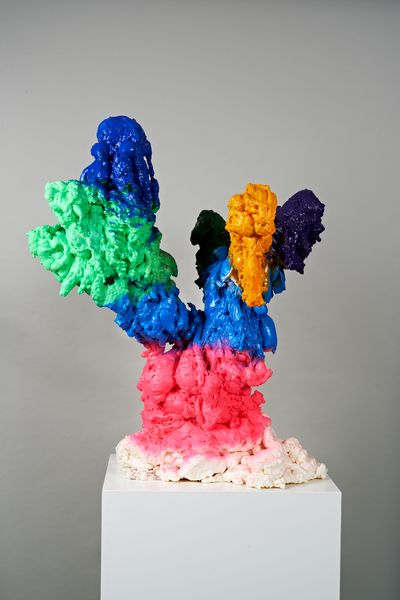 Figurative
Figurative refers to portraying the (human or animal) figure. Figurative sculpture can be either realistic (in varying degrees) or stylized.

Monument
A structure created to commemorate a person or event. Monument often refers to a building or structure of historical or cultural significance.

Another artists to consider is Thomas Houseago. Learn more about him here

Pastiche
An artistic work in a style that imitates that of another work, artist or period.

Another artist to consider is Louise Bourgeois. Learn more about her here

Site-specific
Refers to a work of art designed specifically for a particular location and that has an interrelationship with the location.

Another artist to consider is Dan Graham. Learn more about him here

Surrealist
A 20th Century avant-garde movement in art and literature which sought to release the creative potential of the unconscious mind, for example by the irrational juxtaposition of images.

Unconscious
The part of the mind which is inaccessible to the conscious mind but which affects behaviour and emotions.

Note: You will need to bring pencils and a sketchbook.

Find a partner and ask each other what you feel about the exhibition and how it makes you feel. Try describing the work to your partner and getting them to draw a response to your words.

Practical activity prompts and ideas for discussion following your visit:

What materials and processes has the artist used to make the work?

How does the sculpture communicate?

How do you feel about the sculpture?

How would you contextualise the sculpture? In relation to the artist and it’s title?

Key Stage 1 and 2
What adjectives can you think of to describe the work in the Pigsty?

Key Stage 3
List other items that you think Djordje Ozbolt might like to make a painting or sculpture from. Why do you think he would choose these materials/ objects?

Key Stage 4 and beyond
Consider the titles of Djordje Ozbolt’s art work; does the title change the way we see the work? Discuss your answers.

Djordje Ozbolt also has an exhibition at The Holburne, Bath until 5 March 2017. ‘In ‘The Grand Detour’, acclaimed artist Djordje Ozbolt is telling a new tale, responding directly to the Holburne’s paintings, sculpture and decorative arts. On display throughout the collection and grounds, these works lead us to discover exciting new perspectives on the past and see the Collection afresh.’

Inspiring links that may help with your project

This resource has been produced to accompany the exhibition, ‘The Land We Live In – The Land We Left Behind’, at...

This resource has been produced to accompany the exhibition, ‘Djordje Ozbolt: Brave New World’, at Hauser & Wirth...