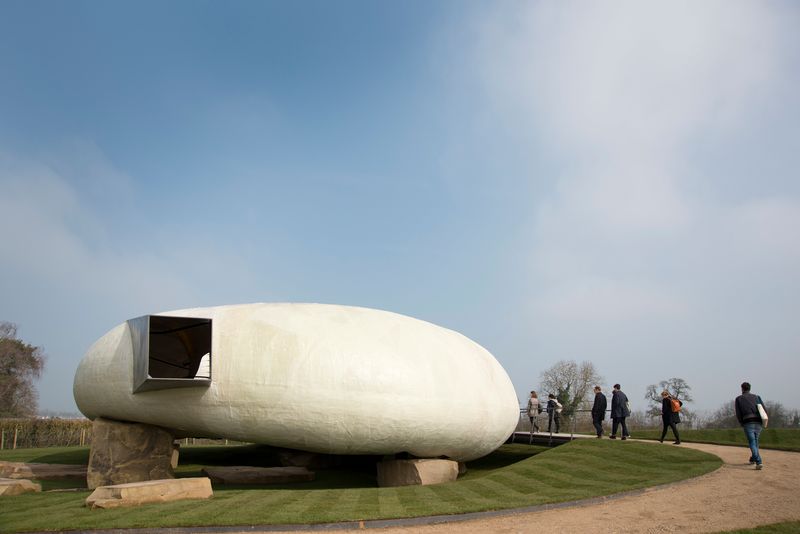 Hauser & Wirth Somerset's second International Curatorial Residency brought together five influential curators from around the world to spend five days immersed in its ethos and programming of the gallery. During the residency, the curators – each bringing their own personal experiences and knowledge – engage with artists, gallery staff and members of the local community, inspiring their creative discourse.

On the final day, the resident curators formed a public symposium titled ‘Exploring the Third Dimension’. This one-day symposium examined curatorial practice in relation to sculpture and explore different models of display, with reference to cultural activism, education and engagement with three-dimensional artworks.

Chaired by Stephen Feeke, Director of the New Art Centre, the symposium invites questions such as how might we think differently about sculpture as an art historical category in its own right. The symposium also included presentations from each of the participating curators responding to a question for 10 minutes.

Lucy Askew is Senior Curator at the Scottish National Gallery of Modern Art, Edinburgh where she has responsibility for curating exhibitions and displays and leading on acquisitions, research activity and partnership projects. She was previously the first curator of ARTIST ROOMS, working jointly for Tate and National Galleries of Scotland. Prior to that, she was Assistant Curator (International Art) at Tate Modern. Lucy studied at the University of St Andrews and the Courtauld Institute of Art, London. She is currently Vice Chair of the Board of Trustees of Dundee Contemporary Arts (DCA) and a member of the Board of Trustees for The Common Guild, Glasgow.

Cathleen Chaffee is the Chief Curator at the Albright-Knox Art Gallery. Prior to joining the Albright-Knox in 2014, she held curatorial positions at the Yale University Art Gallery, the Museum of Modern Art, and the Cleveland Museum of Art. She recently organized the first retrospective of the work of Tony Conrad (1940–2016), which opened at the Albright-Knox in March 2018, and is traveling for a co-presentation at MIT’s List Visual Arts Center and the Carpenter Center for the Visual Arts at Harvard University, and to the Institute of Contemporary Art at the University of Pennsylvania. She has recently organized solo and two person exhibitions with artists including Joe Bradley, Tamar Guimarães and Kasper Akhøj, Jacob Kassay, Eric N. Mack, Willa Nasatir, Mark Bradford and Clyfford Still, Erin Shirreff, Eija-Liisa Ahtila, and Ellie Ga. Chaffee is currently researching a project dedicated to Marisol (María Sol Escobar) (Venezuelan and American, born France, 1930–2016).

Ruth Estévez is a curator, writer, and stage designer. Her curatorial approach is highly influenced by her interest in the historical relationship between theatre and the visual arts. She likes to challenge the possibilities of the exhibition format pushing the boundaries of timing and materiality as well as the methodologies of production and presentation. She was the gallery director and curator at REDCAT in Los Angeles from 2012-2018. Before REDCAT she was the Chief Curator at the Carrillo Gil museum in Mexico City, where she also founded LIGA, Space for architecture, a non-for-profit platform focused on experimentation in architecture. Estévez has contributed to numerous exhibition catalogues and art publications, and has independently organized exhibitions in Spain, France, Belgium, Brazil, Argentina and Mexico.

Samuel Leuenberger is an independent Curator; Curator of Art Basel’s Parcours sector since 2016; and Founder and Director of SALTS, a non-for-profit exhibition space in Birsfelden, Switzerland. SALTS’ mission is to support young Swiss and international artists to develop unique and outstanding site-specific projects. Since 2009, the exhibitions have often materialised on site, in varied forms of media, always with the goal to push beyond the artists’ daily practice, while challenging the audience’s formal and conceptual expectations. Each new project grows out of a unique commissioning process, born from an open-ended conversation, with the ultimate goal to become a landmark in an artist’s career. SALTS promotes an interdisciplinary exchange and dialogue and encourages involvement with other non-for-profits spaces, while fostering a dialogue with educational institutions on a national and international level. The organisation also hosts regular contributions by guest curators.

Li Zhenhua is an independent curator, artist and producer that has worked in the field of art and culture since 1996. Currently, LI is the advisor for A4 Art Museum in Chengdu with an ongoing project with artist Roman Signer; HOW Art Museum in Shanghai; and the exhibition ‘Game On’ – the first major international touring exhibition exploring the history and culture of computer games – at the Barbican in London. He curates Art Basel’s Hong Kong Film programme and founded Laboratory Art Beijing, a platform for sharing and building constructive ideas.  In the late 90s Li was involved in the Post Sense and Sensibility movement in Beijing, China, and the beginning of international new media art in China after 2000. He has curated international museum shows at numerous institutions including: Walker Art Center, Minneapolis; K11 Chi Art Space, Hong Kong; The Sainsbury Center for Visual Arts, Norwich; Shanghai 21st Century Minsheng Art Museum; Beijing CAFA Museum, and has been the curator for biennales including the Ural Biennale and the Shenzhen Independent Animation Biennale. From 2015-2016 Li received several curatorial awards in China and Russia, and from 1992 – 1996 Li was a practicing chef.

‘We Do, We Undo, We Redo’: A Performance Event

‘We Do, We Undo, We Redo’ was a one-off performance at Hauser & Wirth Somerset in 2019 that responded to the...

In Conversation: On Moholy-Nagy

This discussion explored the work and life of visionary artist László Moholy-Nagy. Hear insights into the artistic...

The legacy that Ursula Hauser has created as a collector and woman in the arts was the starting point for a...

Keith Tyson discussed his work with Ben Luke in the setting of the exhibition at Hauser & Wirth London, featuring...