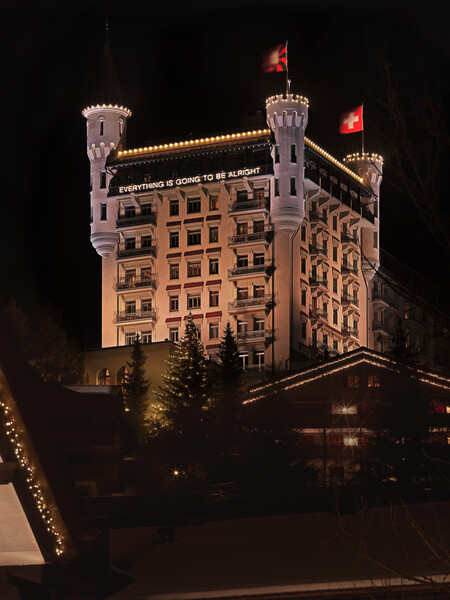 A new neon work by acclaimed British artist Martin Creed, ‘Work No. 3485 EVERYTHING IS GOING TO BE ALRIGHT’, is lighting up the façade of the Gstaad Palace in Switzerland. The installation is organized by Hauser & Wirth and the Gstaad Palace in an ongoing collaboration, installing iconic artworks by artists from the gallery’s roster since 2019. This year’s special public display is made possible with the generous support of Alex Hank.

Awarded the Turner Prize in 2001 for ‘Work 227: The lights going on and off’, Creed has become known for hugely varied work, which is by turns uncompromising, entertaining, shocking and beautiful. The work on view in Gstaad is one of Creed’s most well-known installations: the phrase ‘Everything is going to be alright’ has been used by the artist in a series of large-scale neon works since 1999, and has been installed across internationally renowned institutions and buildings, including the façade of the Tate in London, and most recently Braemar Castle in Aberdeenshire, Scotland. The phrase draws on the comforting words Creed was offered by a friend: ‘No one can really tell you everything is going to be alright, but despite that, many times in my life I have been very comforted by people saying something like that to me.’ The resulting work has never resonated so poignantly as in the current situation. As we look ahead, Creed’s words offer an optimistic message and encourage a contemplative response from the viewer.

The installation on the Gstaad Palace follows last year’s project with US artist Jenny Holzer, who projected large, scrolling texts, known as her truisms, onto the building and the surrounding landscape. Martin Creed’s new installation coincides with the presentation ‘Louise Bourgeois. The Heart Has Its Reasons’, available to experience at the exhibition space Tarmak22 in Gstaad and on hauserwirth.com from the 19 December until the 3 February 2021. From the 18 December, Creed’s 8-metre tall and 15-metre long artwork ‘Work No. 2630 UNDERSTANDING’ will be installed in central Copenhagen. The artwork was previously presented by Public Art Fund in Brooklyn, New York, and this year is realised by Roskilde Festival in collaboration with Creator Projects, Ofelia Plads Association, New Carlsberg Foundation and The Augustinus Foundation.

Martin Creed performing some new and old songs from his home in London to mark the launch of ‘Dispatches’, our new...

Since the beginning of his career, Martin Creed has numbered rather than named his pieces, starting, cryptically...