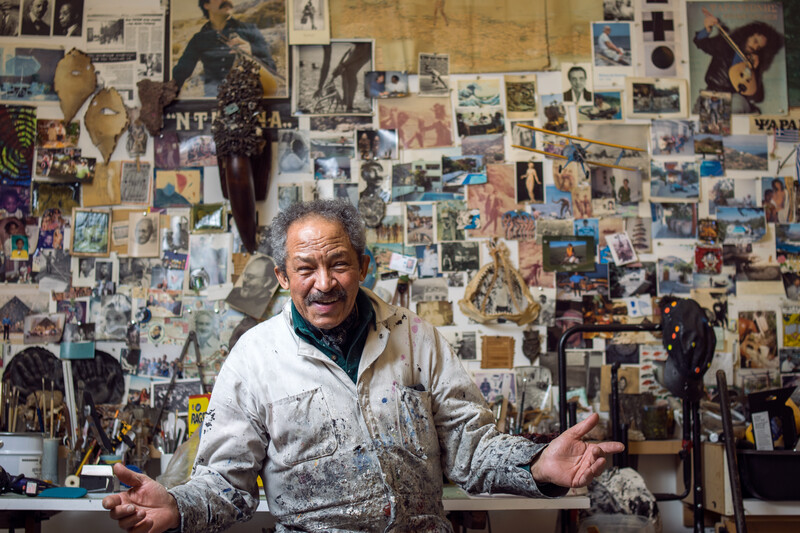 On the occasion of the first major survey of Jack Whitten’s works on paper, we take a closer look at the artist's evolution spanning his six decade career.

Born in Bessemer, Alabama in 1939, Jack Whitten was an active participant in the Civil Rights Movement before moving north to New York City in the early 1960s and enrolling at Cooper Union. He mingled downtown with the Abstract Expressionists, absorbing the influence of Willem de Kooning, Mark Rothko, Franz Kline, and Philip Guston, while engaging uptown with Norman Lewis and Romare Bearden. But Whitten would soon prioritize his own distinctly experimental vision, engineering breakthrough after breakthrough with techniques and materials, articulating new pathways between artworks and their inspirations.

At times he has pursued quickly applied gestural techniques akin to photography or printmaking. At other times, the deliberative and constructive hand is evident. From his series of small ‘Ghost’ canvases of the 1960s and subsequent pulled ‘Slabs’ and dragged canvases of the 1970s, Whitten moved on to collaged acrylic ‘Skins’ of the 1980s, and eventually to his more recent tessellated constructions – paintings that look like mosaics but are actually composed of dried-acrylic paint chips as tesserae unevenly set in wet acrylic. 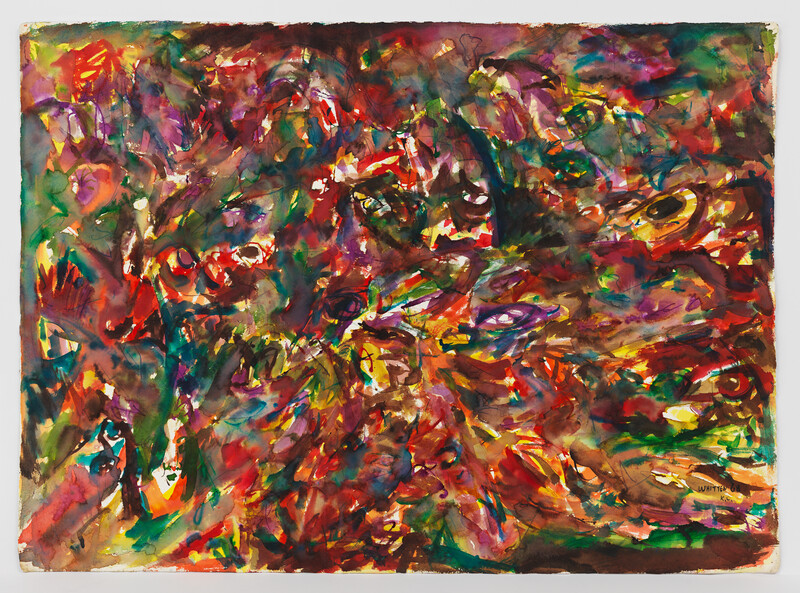 As a young, African-American man in the 1960s, Jack Whitten produced works that were driven by the politics of race and the necessary search for identity. The works that constitute this decade in the artist’s life and career are intimate and, at times, biographical. Additionally, the symbol of sexuality became a catalyst in the formation of representational imagery.

In 1968, Whitten created a group of drawings and paintings dedicated to Dr. Martin Luther King. Deeply moved by King’s personage and words, the artist began representing him through the metaphor of gardens, a symbol of germination, cultivation, and growth. ‘King’s Garden’ is a series of fourteen drawings that effectively portray the hopefulness, tribulations, and confusion of the civil rights era. The ‘Garden’ series also pays tribute to the ‘Garden in Sochi’ paintings created by Arshile Gorky, whose work Whitten loved and admired.

By the end of this period, Whitten produced a series of works titled ‘Transitional Space,’ the inspiration behind the title of this exhibition. It is this notion of living and working within a space of perpetual transition that characterizes the artist’s larger practice. Without a final destination, these drawings served as a platform within which Whitten could conduct research, execute experiments, and create visual syntax. Within ‘Transitional Space,’ one can recognize the culmination of his thinking and artistic development of the 1960s, exemplified by his gradual shift from naturalistic representation into pure abstraction, meanwhile achieving painterly streaks. Throughout the 1960s, one can sense the artist’s anticipation of his growing commitment to plasticity and sensibility. 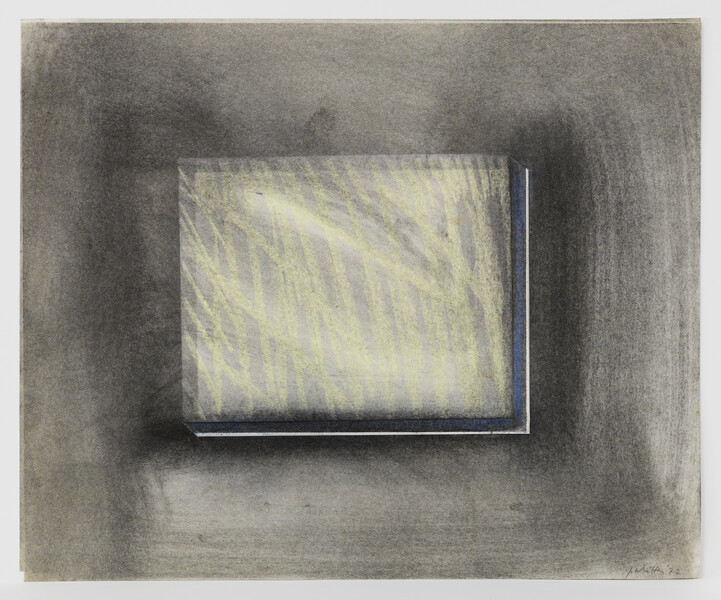 During the 1970s, Whitten made the conscious decision to remove all gestural mark-making from his work, switching gears to focus more on mechanical automation. He relied heavily on the capacities of Xerox’s electrostatic printing technology, which allowed him to push traditional visual vocabulary and manipulate the idea of plane and space. Moreover, he removed the use of pens and brushes and began using unconventional tools for drawings and paintings such as a carpenter’s saw blade and an afro-comb. Whitten named these new tools ‘processors’ or ‘developers,’ reiterating the connections to photo-processing; these enabled him to create abstract constructions formed by one sweeping motion. Works such as ‘Broken Plane #6’ served as the pre-cursor to the floating geometry of the Greek Alphabet series (1975 – 78).

With an emphasis on formal innovation, Whitten not only constructed new artistic implements, he additionally transformed the original essence of traditional mediums.By the mid-1970s, he began using dried acrylic paint as collage elements, a radical approach to painting that would continue to carry through the rest of his career. ‘Untitled’ (1973) is an exemplar of this transformation, in which Whitten first came up with the idea of paint as collage; it marks the turning point for everything to come. It is at this precise moment that Whitten reintroduced painting as a dimensional, dynamic object rather than merely a flat surface. 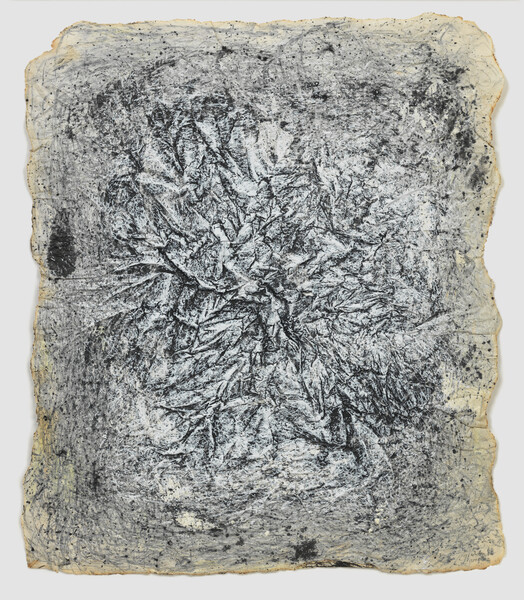 In lieu of following the commercially driven aesthetics of the 1980s, Whitten turned his focus toward spirituality and thought. The concept of mechanical automatism is directly in tandem with Whitten’s intrigue with the divine. Working with self-constructed tools and varying supports, he was reevaluating notions of control. For the artist, the 1980s represented an epoch of experimentation and regeneration, driven by his proclivity towards the cosmic and quantum. By testing and stretching the possible capacities of various materials and mediums, Whitten allowed for forms to arise independently from his touch and control. In turn, the artist’s body can be interpreted as a foil for cosmic data to be transmitted and translated as visual vibrations.

Made of Sumi ink, acrylic, and rice paper, ‘Site #2’ is demonstrative of the laissez-faire attitude with which Whitten approached certain materials. The challenge and subsequent blessing of this medium is that there is no such thing as erasure; once the ink hits the paper, there is no turning back. For Whitten, syntax – the human ability to make sense of opposing systems of thought – was crucial. His artistic production functioned as a bridge between spirit and matter. 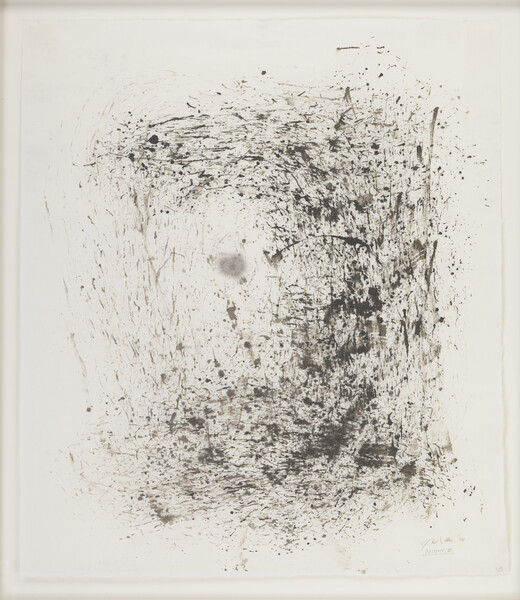 One can see the beauty of Sumi ink’s capacities in Whitten’s ‘Presence’ series, made during the 1990s. This body of work, characterized by their evidently serendipitous marks, is representative of Whitten’s fascination and commitment to materiality. By making marks all across the rice paper, what resulted were apparition-like forms that appear as ephemeral entities.

Working on paper fundamentally served as means of research, both of ideas and the multidimensionality of vision. Drawing on a two-dimensional plane provided the means for all experiments in paint. Newly devised processes and techniques were discovered through Whitten’s experimentation with the unique properties of different papers and mediums. It is through the technical development that arose from these trials that would later nourish the mosaic works to come. As Whitten himself describes, ‘Drawing is the skeleton of what I do in painting’ (Jack Whitten. November 2014). A palpable example of this visual translation can be found in the series titled ‘Broken Grid,’ two of which are featured in the exhibition. Not only does Whitten play with the inevitable outcomes of Sumi ink, he also deconstructs the form created, reshaping its original essence and transforming it into a new construct. This notion of transfiguration is representative of the artist’s anticipation of successive paintings of a similar fashion, in which dried acrylic paint acted as collage elements, or tesserae.

The artist’s grappling with the meaning of vision carried over as he entered the twenty-first century, during which he began experimenting with the usage of found objects as frottage tools. In an attempt to relinquish the notion of concept, Whitten continued to propagate ideas of automatism by experimenting with new modes of mark-making and exploring alternative mediums. For example, Whitten began trialing Renaissance Wax in his later drawings, which perhaps was a playful homage to his previous life as a carpenter; this wax is primarily used in lavish furniture pieces. One can see the presence of wax in works like ‘Space Garden (Flowers #14),’ in addition to the hybridity of forms and techniques that constitute it.

Here, one can feel the harmonious dynamism created by the multiple mediums and the artist’s hand: the deliberate frottage that makes up the groundwork, the inclusion of geometry, the amorphous form that results from the mélange of materials at the work’s center. The ‘Space Garden’ series were joyous creations to Whitten, many of which were gifted to close friends. By the end of the decade, Whitten began making a series of ‘Radiator’ drawings, quite literally using a radiator as an immediate drawing tool. After a car malfunction in 2009, the artist took the no-longer functional car part and transformed it into an object, borrowing its grillwork design and transcribing it through the process of rubbing with graphite onto paper. As a consequence, these drawings effectively defy the dichotomy of science versus nature. For Whitten, these drawings were another example of syntax at work. Juxtaposed with the choreography of gestural mark-making, the grill pattern of the radiator becomes a symbol of sensuality. 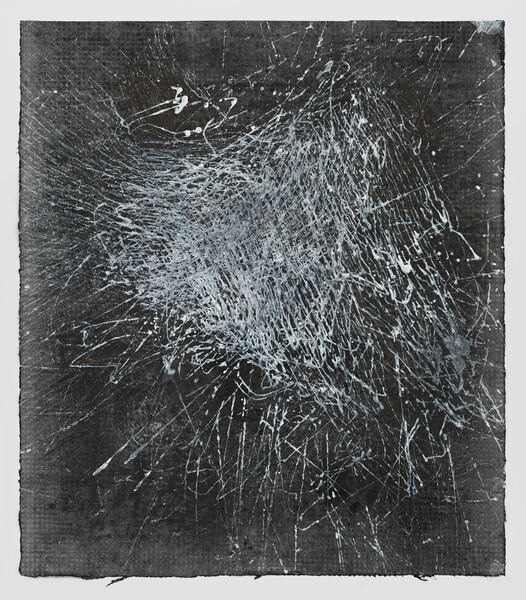 Rather than concerning himself with the modernist notion of progression in relation to the advancement of time, Whitten found it more advantageous to educate himself by going back in time. His tautological approach to learning is made manifest in series like ‘Loop’ and ‘Transmission.’ Perceiving the body as a transmitter of cosmic data, one can interpret these drawings as an illumination of the relationship between the stimuli that comprises space-time and their engagements with the human brain. As an artist, he made it his prerogative to adapt the cosmic vibrations and render them as ingredients for his creative production.

The ‘Loop,’ created by the compression of string onto rice paper saturated with wet acrylic medium, is an autobiographical symbol in which timing is of utmost importance. Whitten’s travels across the globe and the global history of art is illustrated through his self-constructed mapping device, tracing the significant destinations of being in the search for personal identity. Decades of experimentation and innovative use and transformation of various materials through process showed the artist how these complex relationships work. Perpetually living and working in a space of transition, he worked tirelessly to gain a better understanding of how to live.

On the occasion of the first major survey dedicated to the artist's works on paper, Phong Bui, Kelly Baum, and Julie...

The final work created by Jack Whitten before his passing in January 2018 is a memorial to Arshile Gorky. Shimmering...

Jack Whitten: In the Studio

Celebrated for his innovative processes of applying and transfiguring paint in works alert to politics, identity,...