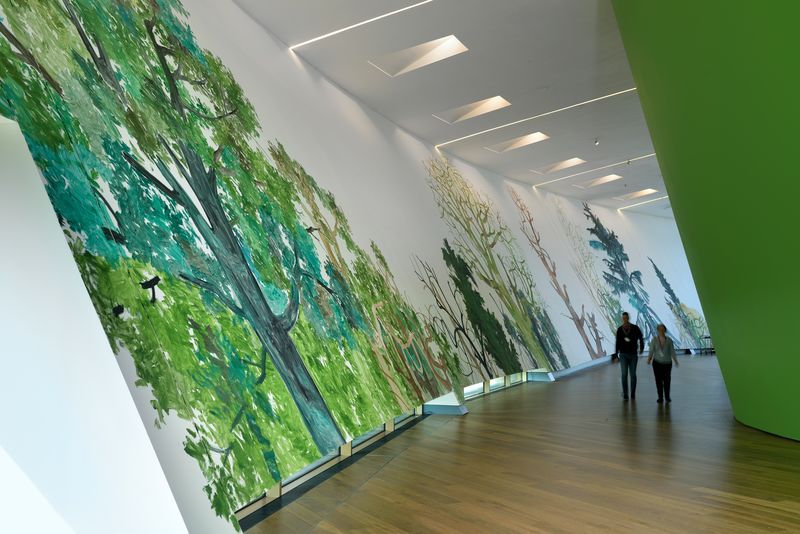 His works are more of a celebration than a critique of daily life. For some time, the Shanghai-based artist has been emptying out the more recognizable content of his canvases. In the beginning, depictions of people gave way to large still lifes; now, representational bits of the world get transformed into vast painterly abstractions.

For instance, at the center of ‘Tension 1,’ 2013 – the earliest of the ten paintings currently on view – a tangle of emerald ropes wraps around what appears to be a pair of dark, thick wires. The rendering of these humble materials within a large space – the piece is more than seven feet wide – allows the artist to paint with a great physicality in long, loopy gestures. More lyrical and syrupy brushwork appears in ‘Black and Red Lines,’ 2016, a lush abstraction rife with murky, watery forms. A grid underpins the imagery of each painting, underlining the work’s formal architecture while subtly transforming the paintings’ surfaces into fragile, translucent veneers.

Trees are also a popular subject with Zhang. Over a ten-day period in the exhibition space, he created a mural dense with them (‘Space Painting,’ 2017) that stretches along a curving, tilted wall within the gallery, producing a kind of forest backdrop for the rest of his works. Zhang cleverly nods to English academic pastoral painting with this effort, of course – but what comes through is not a fidelity to detail or verisimilitude but rather the sumptuousness of Zhang’s painting itself.

Zhang Enli’s work is in dialogue with the light and layered qualities of traditional Chinese brush painting, and at...