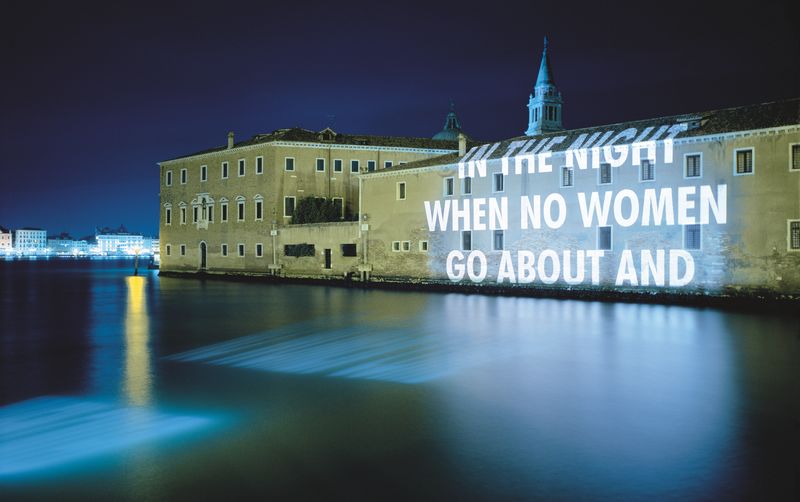 Jenny Holzer has put words in unexpected places for nearly 40 years. Her texts have been flyposted across buses and boats, flashed across electronic billboards and, when she was the first woman to represent the US at the Venice Biennale in 1990, engraved into the US Pavilion’s marble floor.

The Ohio-born artist has projected verses of poetry onto the banks of the Tiber, inscribed accounts of sex crimes in ink onto human skin and engraved them into silver bands attached to human bones. In recent years, she has also returned to her earliest artistic roots by making paintings that meticulously reproduce declassified and often redacted US war documents concerning Iraq and Afghanistan. Now Holzer has been commissioned by the Blenheim Art Foundation to make work for Blenheim Palace in Oxfordshire, UK, which is itself a spoil of war, given to John Churchill, the first Duke of Marlborough, as a reward for defeating the French at the Battle of Blenheim in 1704. Holzer has also made works for the Louvre Abu Dhabi and the new US Embassy in London, both due to be unveiled later this year. 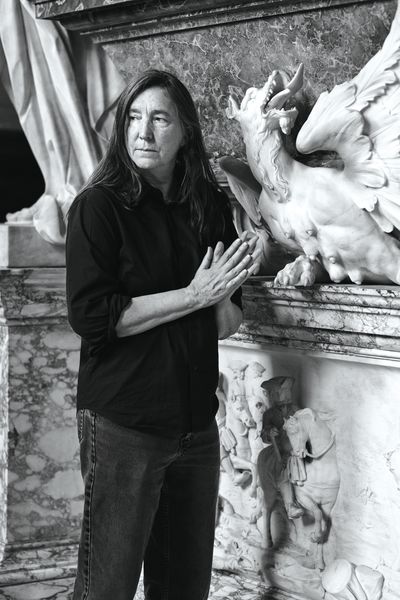 The Art Newspaper: Blenheim Palace is the stateliest of stately homes: seat of the Dukes of Marlborough, built in the 18th century by Vanbrugh, and the birthplace of Winston Churchill. What made you want to show there?

Jenny Holzer: Curiosity. I knew almost nothing about it, hadn’t seen it and I wondered what their ambitions were for doing it, and what I possibly could bring there that wouldn’t embarrass them or me and could conceivably be of use to somebody else. When I learned that it was a prize for a victory in war, that intrigued me because, for better or worse, I am rich in war material. So that made me optimistic that we could go ahead.

AN: So does your work foreground the overlooked fact that Blenheim came into being as a spoil of war?

JH: I’m offering it because it was the thing that hooked me. It’s what I think about every day when I turn on the news. I think of the active conflict, the people fleeing from it, the people lost from it. I don’t think I’m alone in this.

AH: What is the content of the texts that you are projecting onto the walls of Blenheim’s courtyard and the island in the lake in front of the palace?

JH: The content is testimony from war veterans and their family members interviewed by the Not Forgotten Association. We’re choosing texts from veterans who’ve served quite recently because that seemed appropriate. There are also poems from the fantastic Polish poet Anna Swir, works that she wrote 30 years after being a volunteer nurse and in the Resistance during the siege of Warsaw. Then we have text by refugee poets and poems about exile, and finally we have content from Save the Children and Human Rights Watch about Syria and the camps outside. So the texts are either about this sad period of time or read as if they could be. The siege poems of Swir have people in basements waiting to die, or trying not to die.

AH: So I suppose the underpinning theme is that while technology and specific circumstances might vary, the consequences of war remain dismally consistent.

JH: It happens to the flesh and it happens to the mind both before and while it is happening to the flesh, right? In the courtyard there will also be a number of quiet – except for their content – limestone benches that are like the colours on the palace’s façade: that warm stone colour, and some that are grey and subdued. They have single lines from Swir. Rather than my presuming to write about war, I thought I would leave it to someone who experienced it at first hand.

AH: While the benches will remain in situ, the projections will only be showing for a few weeks.

JH: Yes, but even though they are ephemeral I think they might be among the best of the offerings. However, we wanted the projections to live on, so to make them available to more people and for longer there is an app which enables people to see the projections—or chunks of them—when they come into the courtyard at any time. We also have an app that will give simple overlays of text so that one can point one’s phone at a tree, a tapestry, one’s foot or the face of a loved one, and then the text can play.

‘I wanted to be very explicit about certain things and it seemed to make sense to say it to as many people as possible’.

AH: These days you tend to use the words of others. Why?

JH: My writing has gone because I guess my new role is as someone who excerpts or highlights and in some cases animates. It lets me cover more subjects and offer a greater range of everything, from mood to style, than I could manage on my own.

JH: That’s what will go on the façade of the Nouvel building. Since this sort of museum was – and is – a very ambitious and optimistic new idea, I thought that we should build in a creation myth for the content. I love mysterious writing, so we looked at any number of creation myths and chose a good one, I hope. Then, because it was a French and Arab endeavour, we have Montaigne and solid Arab writing. Fingers crossed it’s any good.

AH: Do you have any feelings about the allegations regarding the human rights and working conditions of those building the project?

JH: I thought that its birth, its beginning, was clean and idealistic. I wish it had been easier for people to build, of course. I wish that all around the world.

AH: Did you ever consider withdrawing from participating in the building?

JH: I was aware and pained by some of the things I learned, yes.

AH: Another wall engraving will be in the new US Embassy in London. You have asked US and UK students to submit texts—poetry, lyrics, exclamations, meditations—connecting the UK and the US as allies or as nations under duress.

JH: What I contributed was an idea for people to participate in choosing what could go in the embassy. Maybe I was being uncharacteristically optimistic, but I thought that that was a good thing to do, so we invited various people to submit what they thought would be inspiring there. It’s moving along and hopefully will be a ringing text for a long time.

AH: This project predated the recent presidential election, and the idea of this building being the incarnation of the US in the UK is now rather more vexed.

JH: I can’t wait for Trump to be in the past tense: that’s a one-liner. One of the texts is a truly uplifting one by Robert Francis Kennedy; it’s from back in the glory days when I think any number of people were sincere and wanted things to be better. It rang true and made me wish there were more of that now.

‘Truisms’ (1977-79)
Blunt one-line statements that Holzer anonymously flyposted throughout Manhattan in the late 1970s, which perplexed passers-by with their punchy provocation, their multiple viewpoints and air of mysterious authority. ‘I wanted to be very explicit about certain things and it seemed to make sense to say it to as many people as possible,’ Holzer says. These slogans, which Holzer calls ‘a distillation of sorts’ of her reading list while a student on the Whitney Independent Study Program, have subsequently been projected onto buildings, flashed across illuminated billboards, printed onto t-shirts and chiselled into marble flagstones in the US pavilion at the 1990 Venice Biennale. 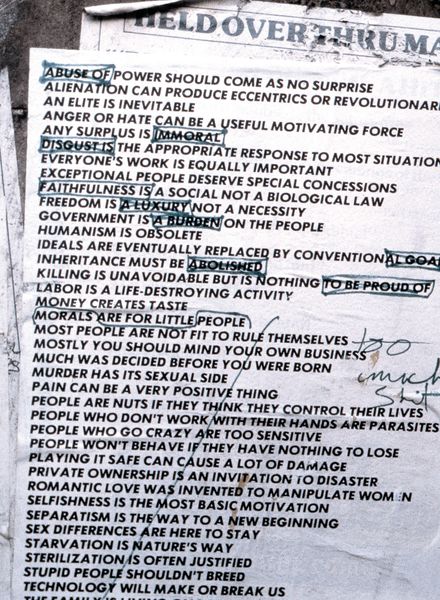 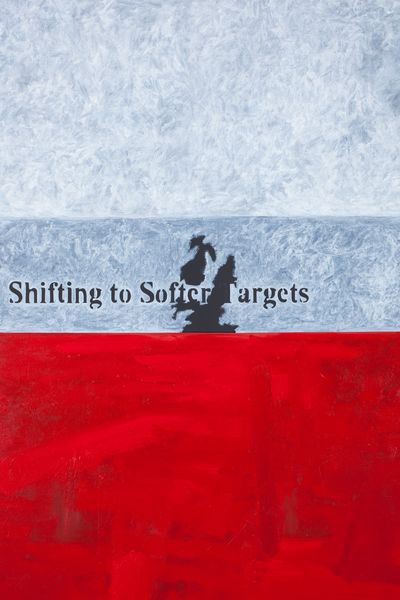 ‘The Redaction Paintings’ (2005-ongoing)
Holzer marked a return to paint with these silkscreened copies of declassified US government documents, enlarged to triple or more their original size and often vividly coloured. Many of these military maps, interrogation protocols, sworn statements, directives and judgments relating to the US’s involvement in the Middle East from the Gulf War onwards are heavily redacted. ‘I thought I should try and offer something substantial and complex – even if at times contradictory – about what literally happened,’ says Holzer. As the series has evolved, many of the later works, although still reproducing government documents, have come to focus on the voices of the interrogated and detained. At the same time, the early silk screens have been replaced by meticulous copies painted in oil on linen, with the areas of redaction sometimes rendering almost all the text illegible. They are often rendered in coloured blocks recalling the Russian Constructivists, who similarly believed that art should have a social and political role. 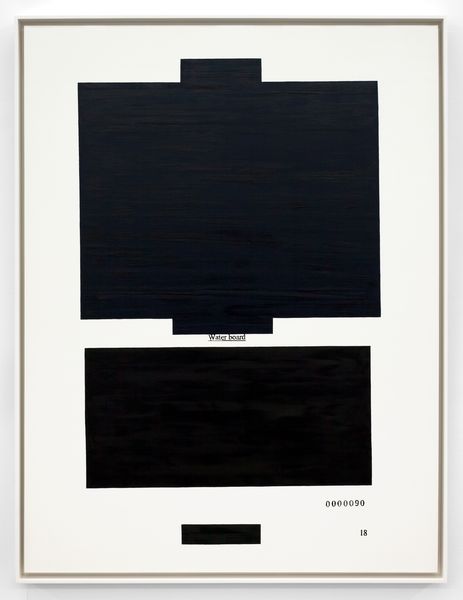 ‘Installation for the Reichstag Building’ (1999)
This permanently installed LED sign in the Bundestag in Berlin displays selections from German parliamentary speeches from between 1871 and 1999, and is an early example of Holzer using the words of others, rather than her own. Now much of her work is drawn from secondary sources, whether poetry, literature, declassified documents or first-hand accounts gleaned from veterans’ associations or aid charities. ‘In 2001, I stopped writing everything except emails and I’ve been delighted to be able to forage for text.’ 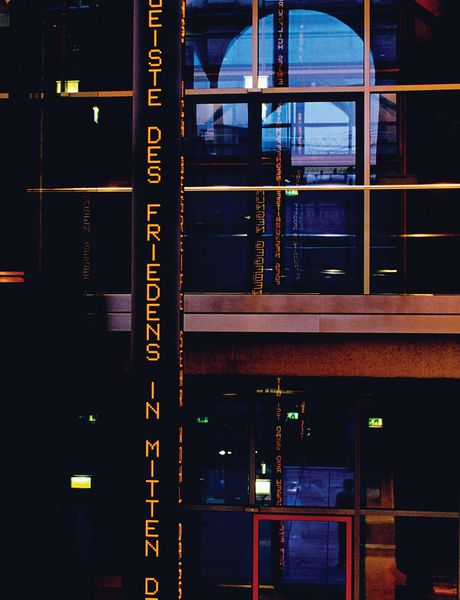 About the Artist
Born in Ohio in 1950 to Richard, a Ford dealer, and Virginia, a riding teacher, Holzer describes herself as ‘a lonely, odd child who tried to get along by reading constantly’ and who ‘wanted to write ecstatic, fantastic things.’

After studying at Duke University, North Carolina and the University of Chicago, Holzer settled on a BFA in painting and printmaking at Ohio University in 1972. ‘I knew I wasn’t Picasso. I didn’t know how to be an artist,’ she says. In 1974, she enrolled at the Rhode Island School of Design summer classes where she met her partner Mike Glier;  she went to graduate school there and got an MFA in 1977. In 1976, Holzer joined the Whitney Museum’s Independent Study Program; the reading list influenced her Truisms series.

While on the Whitney programme, Holzer pasted her first Truisms posters around Manhattan. She went on to produce 12 additional text series; these have appeared in multiple formats, from marble benches to electronic LED signs and building-sized projections. They include the Laments (1988-89), a response to the Aids crisis, and Mother and Child (1990), written after the birth of her daughter Lili in 1988. In 1982, the same year that the Truisms appeared on a billboard in Times Square, Holzer participated in Documenta 7 in Kassel. After solo shows at London’s ICA in 1988 and the Guggenheim in New York in 1989, Holzer became the first woman to represent the US at the Venice Biennale in 1990 and won the Golden Lion for best pavilion. She has shown extensively in global museums ever since. Major public projects have included projections onto the Potomac River in Washington, DC, and the Theatre of Marcellus in Rome, both in 2007. Among her many awards is the Chevalier de L’Ordre des Arts et des Lettres, given by the French Ministry of Culture in 2002. She is represented by Cheim & Read and Sprüth Magers and lives in New York.

For nearly four decades, the American artist Jenny Holzer has put unexpected things into unlikely locations. She has...

ALL THINGS ARE DELICATELY INTERCONNECTED

A Limited-Edition Benefit Print features one of the artist's iconic ‘Truisms’, relaying a timely message that speaks...