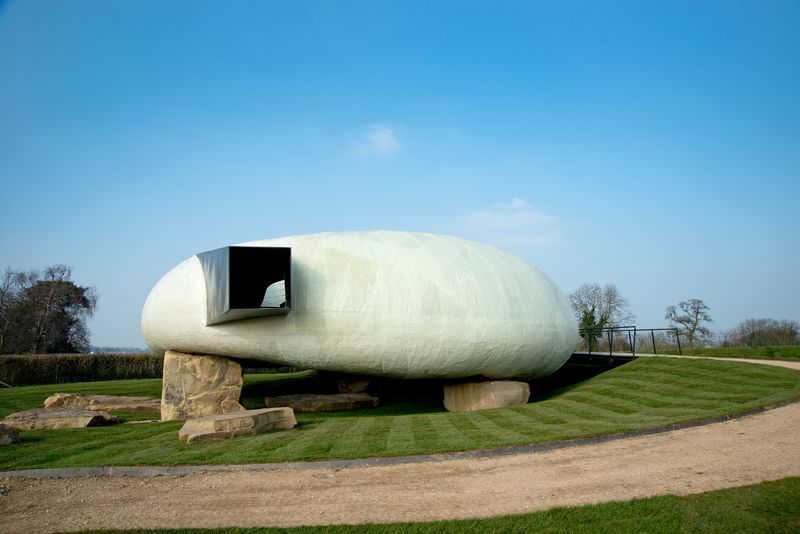 The Radić Pavilion was installed at Hauser & Wirth Somerset in March 2015, at the end of Oudolf Field. Designed by Chilean architect Smiljan Radić, this unique structure was first unveiled as the Serpentine Gallery 2014 Pavilion. Since 2000, the Serpentine Galleries have run an annual programme of temporary structures by internationally-renowned architects.

The pavilion sits naturally within the landscape at Hauser & Wirth Somerset, creating a dialogue between the gallery complex and pavilion, and their relationship with the garden. Visitors to the arts centre have the opportunity to walk around, inside and underneath the pavilion.

Since its launch, the Radić Pavilion has played host to a number of special events including the final of the Shed Competition, a talk by Smiljan Radić, and a family event in partnership with children’s arts charity The House of Fairy Tales.

‘The Radić Pavilion is part of a history of small romantic constructions seen in parks or large gardens, the so-called follies, which were hugely popular from the late 16th century to the beginning of the 19th century. In general, follies appear as ruins or worn away by time, displaying an extravagant, surprising and often primitive nature. These characteristics artificially dissolve the temporal and physical limits of the constructions themselves with their natural surroundings. This pavilion takes these principles and applies them to a contemporary architectural language. Thus, the unusual shape and sensual qualities of the pavilion have a strong physical impact on the visitor. The simultaneously enclosed and open volumes of the structure explore the relationship between the surrounding environment and the interior of the pavilion. From the outside, visitors see a fragile shell in the shape of a hoop suspended on large quarry stones. Appearing as if they had always been part of the landscape these stones are used as supports, giving the pavilion on the one hand a physical weight and on the other holding a structure characterised by lightness and fragility. The shell, which is white, translucent and made of fibreglass, contains an interior that is organised around an empty patio at ground level, giving the sensation that the entire volume is floating. The shell’s surface appears torn thereby incorporating the surroundings of the garden into the interior. The floor is grey wooden decking as if the interior was more a terrace rather than a protected interior space.’

Born in Santiago de Chile, 1965, Smiljan Radić earned his architectural degree from the School of Architecture at the Pontificie Universidad Católica de Chile in 1989. He later studied aesthetics at the Istitutto Universitario di Archittetura de Venice, Venice, Italy (1990 – 1992). In 1994, with partners Nicolas Skutelis and Flavio Zanon, he won the international competition Platia Eleftería, Heraklion, Crete and in 1995 opened his own architecture firm. In 2000, Radić won the civic neighbourhood competition in Concepción, Chile, a project that resulted in Radić being named the best Chilean architect under 35 years of age by the College of Chilean Architects.

He received the Architectural Record’s Design Vanguard award in 2008; was named honorary member of the American Institute of Architects in 2009, and received an achievement award from Universidad Mayor de Chile in 2013. Smiljan Radić completed the majority of his buildings in Chile, with a diverse range of commissions. His smaller public buildings include the extension to Charcoal Burner’s House, Santa Rosa, Chile; The Wardrobe and the Mattress, Tokyo, Japan, and the Bus Stop Commission, Kumbranch, Austria. His larger public buildings in Chile include Restaurant Mestizo, Museo Chileno de Arte Precolombino, and the Winery in Millahue, while his domestic buildings include Cooper House 2; Pite House, and the House for the Right Angle.

His work has been published in several architecture journals and monographs, such as 2G, Revista Internacional de Arquitectura, a+u, ARQ, Casabella, Detail, Lotus and Quaderns d’Arquitectura i Urbanisme, and most recently El Croquis N° 167. He currently lives and works in Chile.