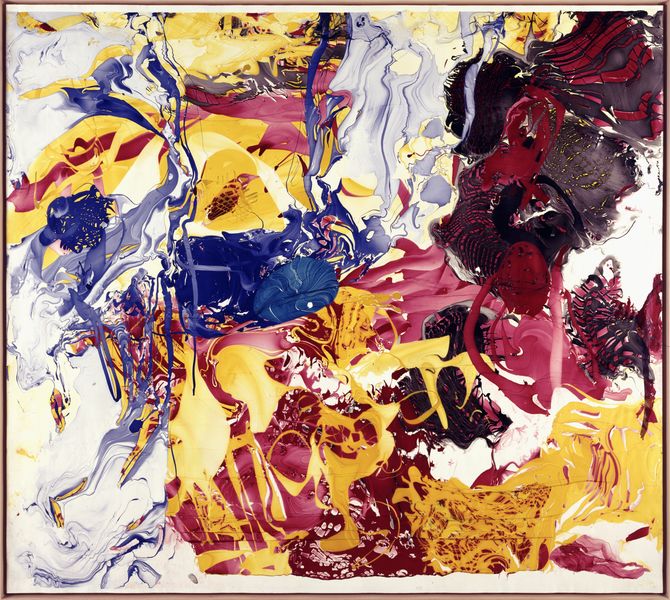 André Thomkins must have been one of those on whom nothing is lost. The origin of the technique he used to make his “Lackskins,” which he began in the mid-1950s, can be ascribed to chance or to observation as you please:

While painting a crib for his child, he noticed that the enamel he’d washed off his brush formed a thin, cohesive skin on top of the water; he liked the look of it, and realized that if he could slide a sheet of paper under the floating paint and then lift it, he’d be able to skim off and preserve the colorful shape.

Thomkins, a Swiss artist who lived much of his life in Germany, was only fifty-five years old when he died in Berlin in 1985; he was at heart less a painter than a sculptor, draftsman, and conceptualist, and he often collaborated with other artists, including George Brecht, Robert Filliou, Dieter Roth, and Daniel Spoerri. Among the most charming of his extremely disparate works is a series of enamel signs, reminiscent of old Paris street signs, bearing palindromes such as OH! CET ÉCHO!; NEE, DIE IDEEN; and STRATEGY: GET ARTS. But with the ‘Lackskins’ he gave himself over to pure painting, though in a highly unusual way.

Included here were twenty-one works from the series; ranging from about seven inches square up to more than six feet across, they are primarily but not exclusively abstract, either grisaille or garishly colorful. Certainly the most impressive pieces were half a dozen very large ones, mostly from early ’60s, though one is dated 1982. (All the paintings here are untitled, except for a black-and-white semi-figurative series from 1961 and 1962 called ‘Astronauts.’) These brilliantly colored compositions are extremely intricate, with multiple pictorial events weaving through one another or suddenly colliding. Many passages feature the kind of combed, swirling effects familiar from, for instance, marbled endpapers, which are made by a similar process – but instead of the even, allover patterns typical of this decorative craft, Thomkins has created stormy, unpredictable, dynamic compositions. A curious effect of their volatility is that they seem as uncontrolled as the weather, yet because they are so complex it seems impossible that they were arrived at by chance. A 1966 television program showing Thomkins at work was also on view, revealing just how precise he was in manipulating his colours, using various implements as well as his own breath to move them around and sometimes even to remove them – this was the process that allowed for revision, though only within a restricted time frame. The ‘Lackskins’ combine spontaneity and calculation in a way that is exhilarating but emotionally chilly, anticipating the highly chromatic abstract paintings Gerhard Richter began producing around 1979. It’s as if one is experiencing a sequence of natural phenomena only to realize that some wizard is secretly controlling everything.

The ‘Astronauts’ show generalized figures – their heads look rather like mushrooms – in equally generalized landscapes, while a couple of works from 1982 display schematic heads. Some of these works are hauntingly atmospheric, but all in all, one feels that the artist’s forcing the ‘Lackskins’ process to yield a simplified figuration, instead of the unusually complex abstraction in typically engendered, was a sidetrack.