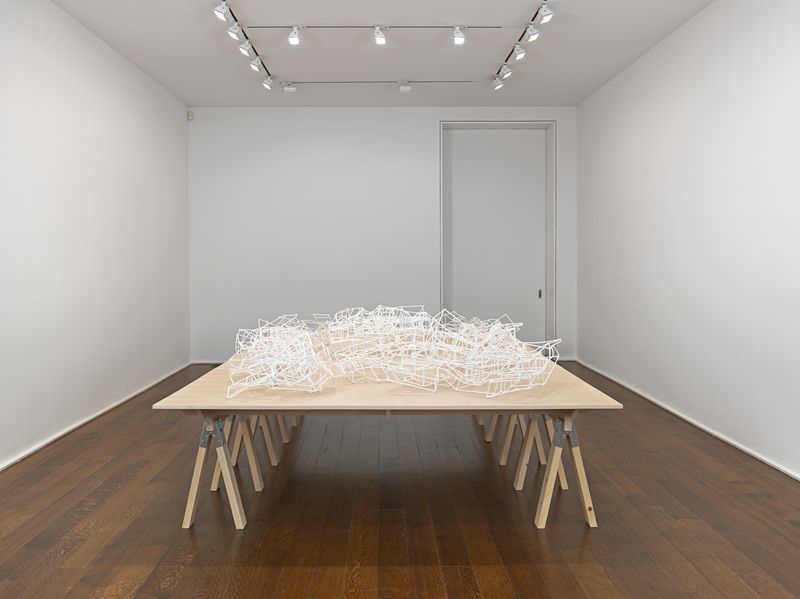 Beginning 15 September 2015, Hauser & Wirth will present its first New York exhibition devoted to Los Angeles-based artist Rachel Khedoori. In a practice that merges architecture, sculpture, and film, Khedoori’s work collides and blurs boundaries between the actual and the perceived, and raises provocative questions about reality and representation.

Made from thin brass rods that have been welded, collapsed, and dipped in plaster, Khedoori’s latest sculptures draw inspiration from ambiguous notions of place. Developed as skeletal architectural models, these small-scale renderings of rooms form an expanse of interlocking grids and chambers, while their structures hint at something both hidden and revealed. Of the two works presented on the gallery’s first floor, the first is a composite geometrical sculpture of stacked corridors and rooms. Its structure recalls the interior of a cave, from which complex webs of interwoven and random patterns emerge.

The second sculpture deconstructs the first and separates the artist’s tangled spaces into 14 individual parts. Forms are turned inside out and convey a sense of visual fragility, as each configured shape physically reflects its own distortion, which has been twisted, deflated, and pulled apart.
 
On the second floor of the exhibition, viewers will encounter a series of 44 ‘Untitled’ photographs. The project developed over the span of a year in which Khedoori drove throughout neighborhoods in Los Angeles, photographing scenes of domestic exteriors. Each image is tightly cropped, framing a window and revealing only the slightest façade of a home. Capturing transitory reflections on the surface of the window’s glass panes, Khedoori constructs layers of images that challenge clear perception. The viewer almost attains the ability to see through the window’s frame, but reflections distort one’s visual acuteness to discern both interior and exterior worlds. Here, the artist’s device is not voyeuristic but almost documentary in approach. Explored in both photography and film, Khedoori thwarts our ability to identify any specific time and place; rather her images block the projection of narrative and offer instead, the impression of fleeting and momentary observations.

Film is an important medium for the artist, who has employed its cinematic effects in her installations to explore the nature of reconstructed and projected spaces. On the third floor, Khedoori has recreated an installation that was first conceived in her studio. Inside one room, walls are covered in custom wallpaper, which is derived from a single black-and-white photograph that has been cropped, digitally altered, and abstracted. The image depicts a scene from nature that has been manipulated and employed as wallpaper in a repeating pattern to an almost dizzying effect. Invoking the slippage of memory, the black-and-white room conjures faintly nostalgic realities of something remembered from the past. In place of windows, walls and doors, Khedoori has suspended mirrors within the room, physically disorienting and shifting perception, a notion that she reiterates and repeats in film. Across the hall, a second room displays a projection of the first. It was filmed by hanging a mechanical turntable in the center of the wallpapered room, which recorded a 360-degree projection of the space. In a dream-like sequence that evokes an internal state of mind, the film dissolves and abstracts recognizable realms of reality, evoking the sensations of depth as the undulating wallpaper and repeated imagery swirl around the room. Moving between the two volumes, visitors can experience the profound and disorienting effects of the image, which visually unfolds and morphs into an all-encompassing environment.
 
About the Artist 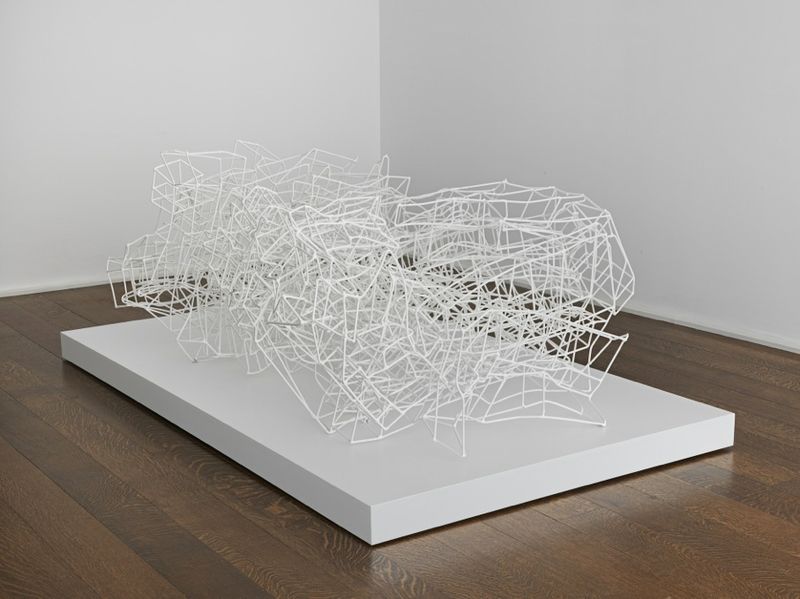 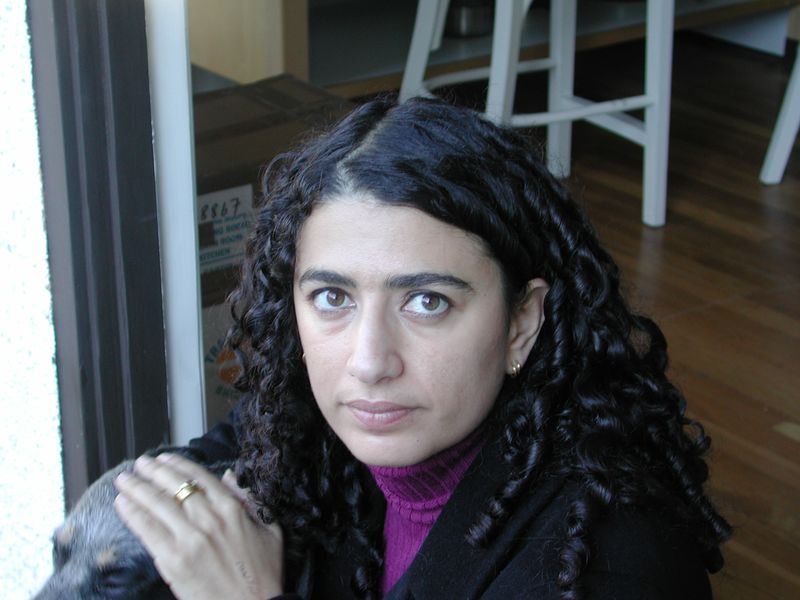