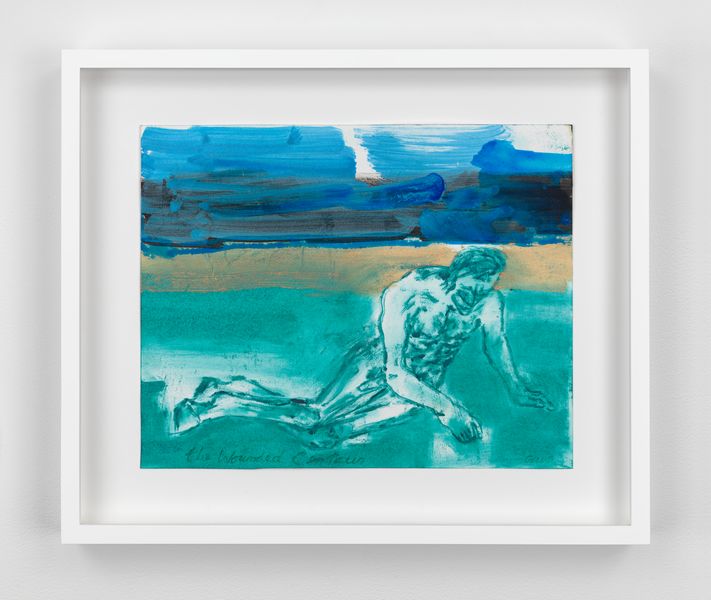 Beginning 11 May 2015, Hauser & Wirth will present the gallery’s inaugural exhibition devoted to renowned postwar American figurative painter Leon Golub. Spanning five decades and including a selection of paintings and late drawings, ‘Leon Golub. Riot’ surveys the late artist’s politically charged and profoundly affecting oeuvre. Golub’s work achieves the gravitas of great history painting, but asserts its modernity and relevance through its raw power of passionate protest. Golub grappled with sprawling themes of war, violence, injustice, oppression and the abuse of power, while intimately engaging the human condition and probing into the realities of our shared experiences.

Following the artist’s highly acclaimed retrospective at the Serpentine Gallery in London, ‘Leon Golub. Riot’ will remain on view at Hauser & Wirth through 20 June 2015. On 15 May, the gallery will host a panel discussion of Golub’s art and legacy with artist Martha Rosler; Hans Ulrich Obrist, Co-Director, Serpentine Galleries; and Samm Kunce of The Estate of Leon Golub.

‘Leon Golub. Riot’ opens with monumental canvases that fill the gallery’s ground floor and immerse visitors in the ferocity of the Golub’s art. Spanning the early 1960s to the late 1980s, these paintings encapsulate the tenets of the artist’s practice and reveal the intense physical process through which Golub corporealized the painted surface. His ripe figuration – his unique ability to materialize flesh – supported his narratives, and allowed the artist to trace the political abuse of power to the body. In these paintings, Golub expresses a vision of life that is both highly personal and broadly existential. Central to the exhibition, these works bracket the mature decades of Leon Golub’s fifty-year career.

Upon entering the gallery, viewers are confronted with ‘Napalm I’ (1969). Created between 1968 and 1969, the Napalm Series represents a pivotal moment when Golub’s subject matter shifted from the mythological to the societal, advancing its relevance and urgency in relation to contemporary life. These paintings are the first to reference the Vietnam War and are part of what Golub himself described as an ‘overt political effort’. Napalm was a substance commonly used during combat in this era; when ignited during attacks, it burned human flesh and wrought death. In ‘Napalm I’, Golub depicts the sheer vulnerability of the human body. Two figures are entangled in a red-stained landscape – as one fights to extricate himself, the other lies mortally wounded with an open, bloody chest. In a repetitive process that required weeks of demanding physical work, Golub dissolved his pigments, soaked the canvas in solvents, scraped away paint with a meat cleaver, and rendered surfaces as eviscerated, porous, and raw as the violence that a human body suffers in scenarios of duress and agony.

In contrast to Golub’s paintings from the sixties, which reveal the classical influence of antiquity rendered in gritty textures and brutal forms, ‘Riot IV’ (1987) and ‘Night Scene I’ (1988) are pictorially fragmented and bathed in blue-green hues, reflecting the urban chaos of a postmodern world. ‘Riot V’ (1987) portrays a psychologically charged scene, its action momentarily suspended before an eruption. A gang of male figures dominates the canvas; a few have already thrust their arms into the air while others, with shoulders hunched forward, appear ready to charge. A single figure stands steadfast and unwavering. His cold stare directly meets the viewer’s gaze, rendering the onlooker an unintentional accomplice. The impending actions stir tension, while the ambiguity of emotion poses a threat. The viewer is caught in a moment of anticipation, waiting to see if the riots will manifest in demonstration and protest or violent events. Art historian John Bird explains, these images are ‘…not of a ‘before and after’ where the viewer interprets the images as a moment extracted from a world of social conflict, but as a situation in which conflict is the very language of pictorial representation.’

The exhibition continues with a selection of canvas, of which the majority have been physically cut into and slashed – the images here literalize the metaphor for acts of violence inflicted upon the body. Revealing the artist’s interest in primitivism, Greco-Roman art, and mythology, works such as ‘Wounded Warrior’ (1968) and ‘Fallen Warrior’ (1968) reveal the profound influence of Golub’s residence in Europe, where he first saw fragments of classical antiquities and was deeply impressed by battle scene friezes, such as those at the Parthenon, depicting primal struggle and violence.

From the mid-1970s through the 1980s, Golub would create his most celebrated works with the series ‘Mercenaries’, ‘Interrogations’, ‘White Squads’, and ‘Riots’. Depicting scenes of coercion, torture, terrorism, and urban unrest, these paintings portray the aggressors as men who perhaps are not so different from ourselves. As depicted in ‘Mercenaries II (Section III)’ (1975), Golub’s narrative is focused upon power and its abuses. Giving particular attention to American military activity in such places as Latin America, the cut canvas preempts the brutality of the actions employed by the authoritarian regime.

On the gallery’s third floor, a selection of late drawings and paintings offer respite from the brutality that dominates the artist’s core body of work. In 2000, Golub began to create drawings, which he continued to produce through the last four years of his life. Intimate in scale and vibrant in color, some of these works employ the technique of oil transfer, while others are rendered in ink and acrylic, and revisit earlier themes, referencing mythology, eroticism, and violence. Images of sensual centaurs and satyrs proliferate the drawings, as well as the symbol of the sphinx, which returns in ‘Alerted’ (2003). Part man and part beast, the sphinx is an ideal metaphor for the struggles of humankind seeking both gratification and civilization. In paintings from the late 1990s, the body is veiled and even replaced by motifs including dogs, skulls, lions and predatory birds. Poignant or proclaimatory lines of text also appear, perhaps most evident in Golub’s biting titles. Works such as ‘Times Up’ (1997) or ‘Skeleton Thumbs Nose at Fatality!’ (2004) are punctuated by an impending sense of mortality. In these and other late works, visitors will find allegories of death subverted by Golub’s dry gallows humor.

Born in Chicago, Illinois, in 1922, Leon Golub received his B.A. in Art History from the University of Chicago in 1942. From 1943 to 1946 Golub served as a cartographer for the US Army Engineers stationed in Europe in World War II and from 1947 to 1949 he studied, under the G.I. Bill, at the School of the Art Institute of Chicago, where he met the artist Nancy Spero, to whom he was married for nearly fifty years. Golub died in New York City in 2004. 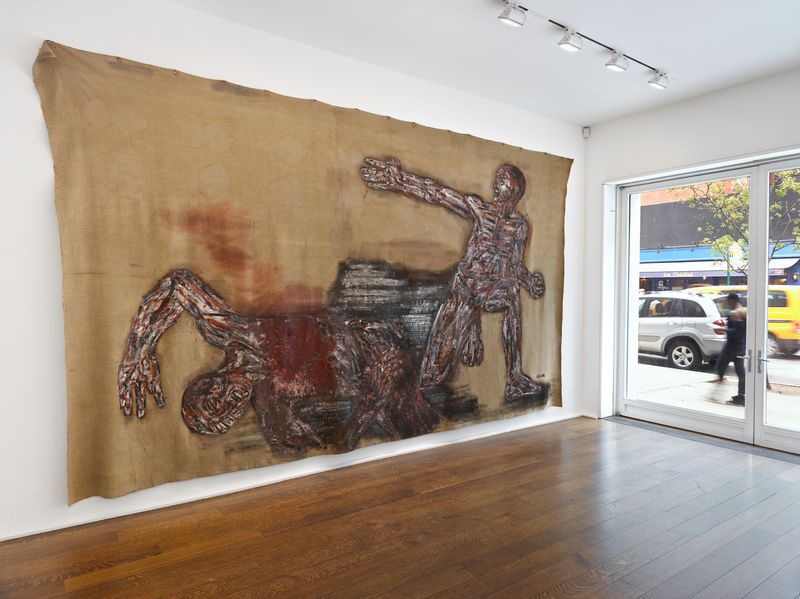 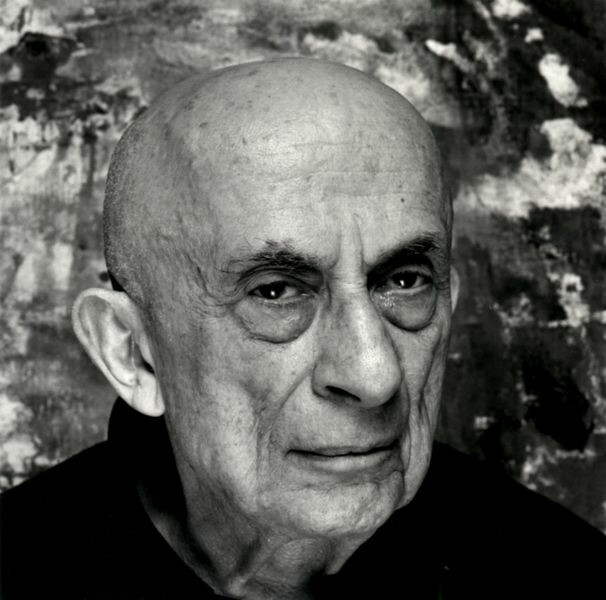 The complex dynamics of power, violence and politics pervade the breadth of Leon Golub’s paintings. Born in Chicago in 1922, Golub received his BA in Art History from the University of Chicago in 1942. Golub subsequently attended the School of the Art Institute of Chicago where he received his BFA and MFA in 1949 and 1950,...