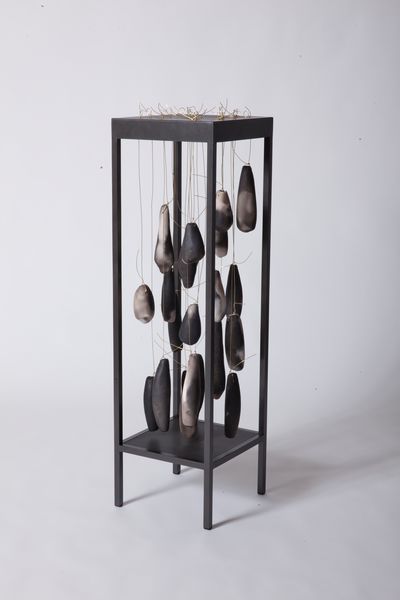 Anna Maria Maiolino is one of the most significant artists working in Brazil today. In a career spanning five decades and a diversity of disciplines and mediums, ranging from drawing, sculpture, and artist books to video and performance, she expresses through her art a bottomless concern with creative and destructive processes and, above all, the never-ending search for identity. Maiolino’s multidisciplinary practice has consistently explored the viscerality of embodied experience – often obliquely through fragmentation and abstraction – and engaged the human body’s processes as analogs for both the making of art and the making of modernity. As an immigrant coming of age in politically unstable Brazil, Maiolino has perfected a dialogue between opposite yet complementary categories in a practice that dissolves dichotomies of inner and outer, self and other. Hers is an art in search of a new language for the liminal realm of daily human existence.

Beginning 7 May 2014, Hauser & Wirth will present ‘Anna Maria Maiolino. Between Senses’, the gallery’s debut exhibition devoted to the artist. On view will be a selection of drawings, works on canvas, sculptures, photographs, and videos, as well the sound installation ‘Two Beats’ (2012), which features the artist’s poem ‘Eu so Eu (I am I)’ that was presented at dOCUMENTA 13.

‘Anna Maria Maiolino. Between Senses’ will remain on view through 21 June 2014.

Born in wartime Italy in 1942, Anna Maria Maiolino immigrated with her family to South America in 1954, living first in Venezuela and moving to Rio de Janeiro in 1960. ‘I found myself being an immigrant again, without speaking Portuguese’, the artist recalls. ‘What kept me going was my obstinate search for a language, my obsession to become an artist. All my energy was spent trying to become an individual. The existential and art formed one anguished body. My life was dominated by anguish and doubts, although I also wanted to participate in that moment of great political, social and artistic effervescence that was pushing artists to make alliances with the previous generations… We wanted to develop an autonomous national art, far removed from external patterns and models. We dreamt of a free and autonomous Latin America, with its own economic resources, and art was no different in this respect’.

Maiolino’s early experiments in the 1960s connected her to important movements in Brazilian art history, shadowed by the turmoil and governance of military repression: Neo-Concrete, New Figuration, New Objectivity. Maiolino took part in the radical reconfiguring of the art object – and thus the art institution and the artist – during this period. Along with Lygia Pape, Lygia Clark, and Hélio Oiticica, Maiolino participated in the 1967 exhibition, ‘New Brazilian Objectivity’, which symbolized a cultural shift in previous constructivist traditions and established a new vision for the production of art in Brazil. After living in New York from 1968 to 1971, she returned to Brazil and devoted herself to drawing as a means of self-expression. Working to further define her identity as both an individual and an artist, she initiated a new series of works on paper that gave emphasis to the gesture, the action, and the process of making. Since the 1990s, Maiolino’s drawings – on view in the exhibition at Hauser & Wirth – have engaged similar methodologies in her continual exploration of materials and media.

The drawing ‘Untitled’ (2006), from the series ‘Codificações Matéricas (Matter Codification)’, exemplifies the poetic discourse that Maiolino generates from the simplicity of a single gesture. She explains, ‘the drop falls by the action of gravity onto the surface of the paper which I hold in my hands. Like the captain of a ship that holds the helm, I confidently move the raised sheet of paper with alert eyes capturing and incorporating chance’. Guided by such rhythmic movements of the body, ‘Untitled’ (2011), from the series ‘Interações (Interactions)’ recalls biomorphic and organic lines that spill down the sheet of paper. In contrast, ‘Untitled’ (2010) from the ‘Vestígios (Vestiges)’ series retains an austere and graphic refinement from small, tightly clustered marks of ink. For Maiolino, paper becomes more than a surface for drawing; it is both ‘matter and body’, expressed through the act of gesture. Employing similar methodologies for each drawing series, Maiolino developed a system of serial movements that in turn rendered distinct and unique results.

Maiolino has worked primarily in clay since 1989, noting that her first encounter with the material provoked a fire from within: ‘When we lay our hands on that wet mass of clay, a whole cosmic vision appears with all the archetypes of creation’, she once said. Maiolino relates the act of molding clay to the act of writing and the mobility of drawing; molding involves a language of hand gestures, a type of serial aesthetic exploration conducted through the acts of kneading, rolling, stretching, and cutting. In ‘Untitled’ (1993 / 2013) from the ‘Cobrinhas (Little Snakes)’ series, Maiolino employs basic forms to create coils, repeatedly made and added to the body of her sculpture. Through these works and the processes that rendered them, the artist reaches toward what she has described as ‘the big and transcendental things: the search for totality and the infinite through repetition and seriality’.

In the three freestanding sculptures ‘São 21 (They are 21)’ (2013), ‘São 25 (They are 25)’ (2013), and ‘Mais que Um (More than One)’ (2013) from the ‘Preposições (Prepositions)’ series, Maiolino incorporates the practice of Raku ceramics. The flamed surface of each piece retains traces of its firing process, and for Maiolino, sustains its organic materiality and relation to the earth and the moving body that shaped it. Employing techniques of modeling, molding, and casting, Maiolino engages a dialogue of opposites: the positive, the negative, and ‘in-between space’. Evocative of century old fossils or the membranes of a coral reef, works from her series ‘Entre o Dentro e o Fora (Between Inside and Outside)’ are filled by cavities and holes. Maiolino associates these molds with the nowabsent objects that once occupied the negative space left behind.

In a selection of videos, Maiolino continues to probe into explorations of identity and the experiences of daily life. Manifested as a self-portrait, the video ’08/07/2013′ (2013), from the ‘Present’ series, discusses the significance of a single experience that transpired on the artist’s journey home from dOCUMENTA 13. Referencing topics of immigration, poverty and politics, Maiolino fuses together memories to interpret the passing of time, reflecting on the nature of identity, self and belonging. Anna Maria Maiolino’s work grows in spiral succession. Neither linear nor chronological, the ongoing, open-ended nature of her practice enables her to work freely across discipline and media, while marinating a coherent conceptual thread through the entirety of her body of work.

São 21 (They are 21), from Preposições (Prepositions) series 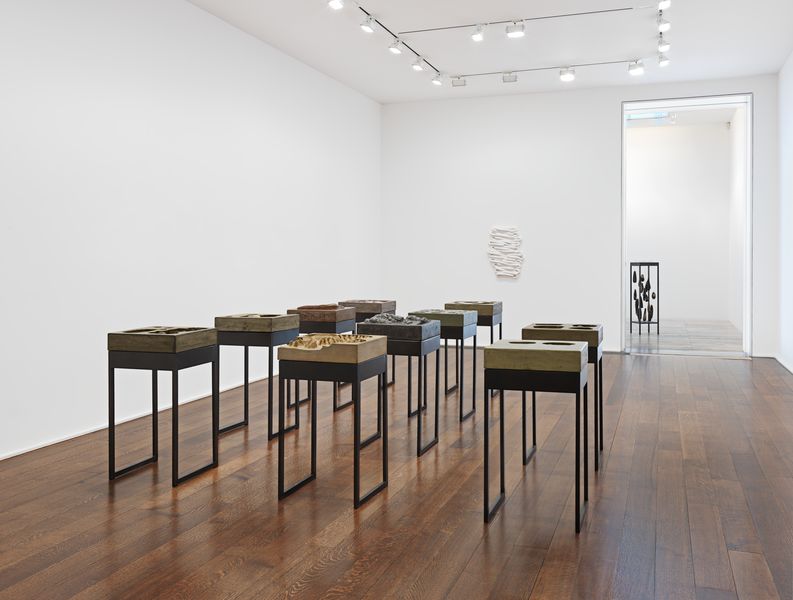 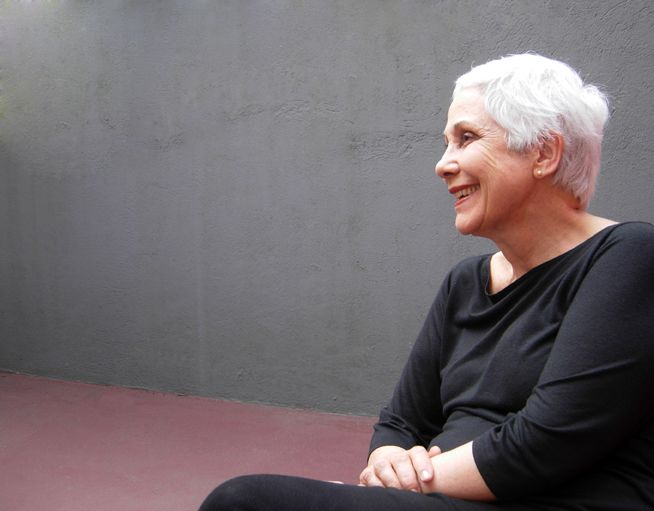