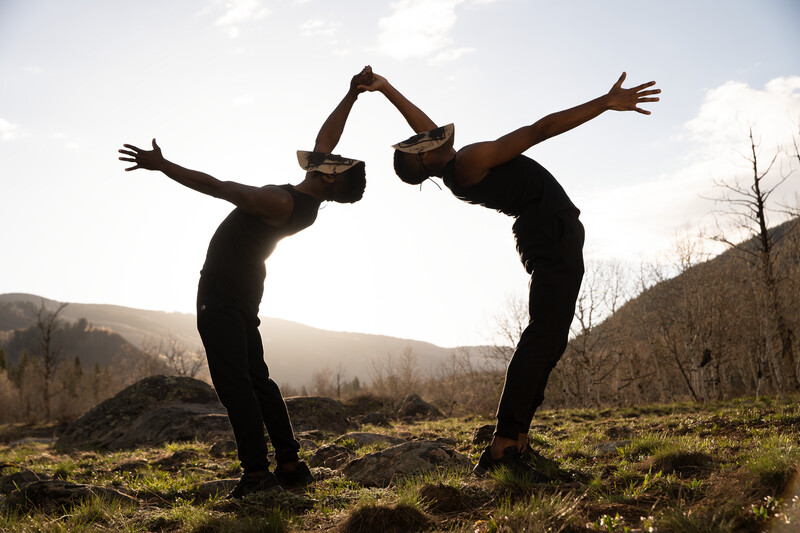 Hauser & Wirth is pleased to present ‘The Hikers,’ an exhibition of recent works by American artist Rashid Johnson. The exhibition brings together ceramic tile mosaics, collaged paintings, and a largescale sculpture that address Johnson’s recurring interest in currents of anxiety and escapism created by the political and social turmoil felt across the United States and around the globe. The exhibition borrows its title from Johnson’s latest film, a centerpiece of the exhibition, shot earlier this year on location in the mountains of Colorado.

‘The Hikers’ unfolds through five rooms on the gallery’s second floor, in a formal arrangement that echoes the fragmentation and accumulation of Johnson’s mosaics and collaged works on display. The viewer is first greeted by three monumental mosaics, each comprised of myriad materials familiar from the artist’s practice: multi-color ceramic and mirror tile, oil stick, black soap, wax, and branded red oak flooring. These works evolved out of Johnson’s Anxious Men and Anxious Audiences (2015 – 2018), earlier series in which frenzied, abstracted faces were rendered in black soap and wax on a grid of white tiles. Here, his images of Broken Men and their fellows explore in a storm of bold hues, errant drips of wax, splashes of paint, and splintered surfaces.

In these new works, Johnson pushes the anxiety of his figures to a breaking point, both metaphorically and physically. Whether portrayed alone or in groups, as in ‘Broken Crowds’ (2019), on view in the exhibitions second room, these broken figures speak to collective and individual identities caught in the midst of shifting social realities. As injustices and racial conflicts in the US have continued to flare, Johnson’s works have likewise become more charged and dystopian than their earlier Anxious counterparts.

Weathering this turmoil, ‘Untitled BronzeHead’ (2019) is a large-scale bronze figure that awaits the viewer traversing ‘TheHikers.’ This imposing, black patinated bust, standing five feet tall and brimming with verdure, recalls both its smaller ceramic counterparts and Johnson’s gridded metal structures (among them the2016 monumental installation ‘Antoine’s Organ,’ populated with potted vegetation). Johnson’s new sculpture takes on a shamanistic or fetishistic quality, proposing an organic framework, an ecosystem for which to care and in which to thrive.

In an adjacent room, three recent works from Johnson’s series of Escape Collagesextend across the walls in kaleidoscopic compositions of appropriated photographic imagery. African masks, palm trees, sunsets, seascapes, galaxies, forest fires, and covers of Harold Cruse’s celebrated 1967 treatise ‘The Crisis of the Negro Intellectual’ all come together in dizzying juxtapositions rendered on a cinematic scale. The surfaces of these works are punctuated with interventions of ceramic tile, mirror, and wood; sweeping gestures of the artist’shand are recorded in thick oil stick and enamel spray paint.

‘The Hikers’ culminates with Johnson’s 16 mm film of the same name. Seven minutes in length, the film features two black male hikers — one ascending a mountain, another descending — who encounter each other as their paths cross. Their balletic movements are at once lithe and halting, athletic and awkward, challenging stereotypical notions of the forever rhythmic elegance of the black body in space. Collaborating with a choreographer, Johnson sought to express the psychological and physical consequences of life in the naturally challenging and too often unjust modern world, asking himself: ‘What are the movements like when a black man is walking past a police officer? Or when a black man is suffering from agoraphobia?’ [1]

‘The Hikers,’ debuted at the AspenArt Museum, CO, accompanied by a dance performance, and was subsequently shown at Museo Tamayo, Mexico, earlier this year. Hauser & Wirth is pleased to hosta series of related performances in conjunction with Rashid Johnson’s exhibition. See www.hauserwirth.com/events for details of the performances. 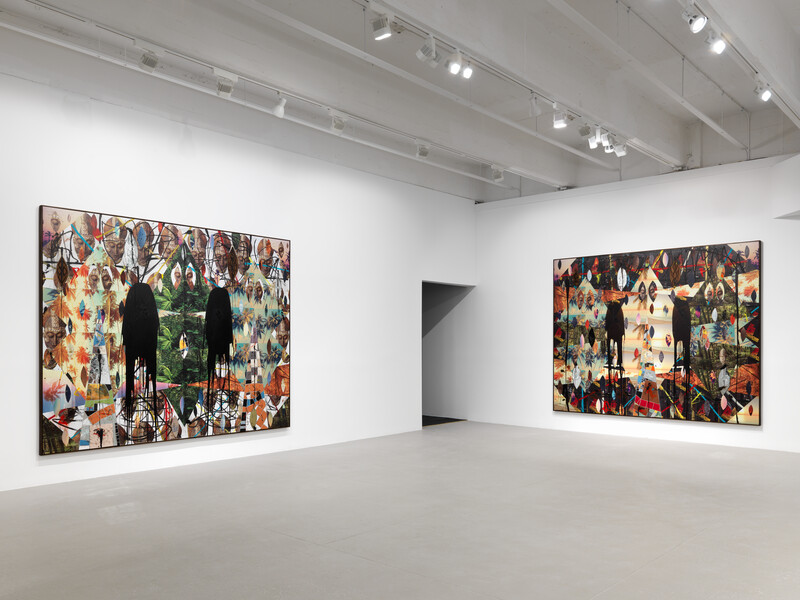 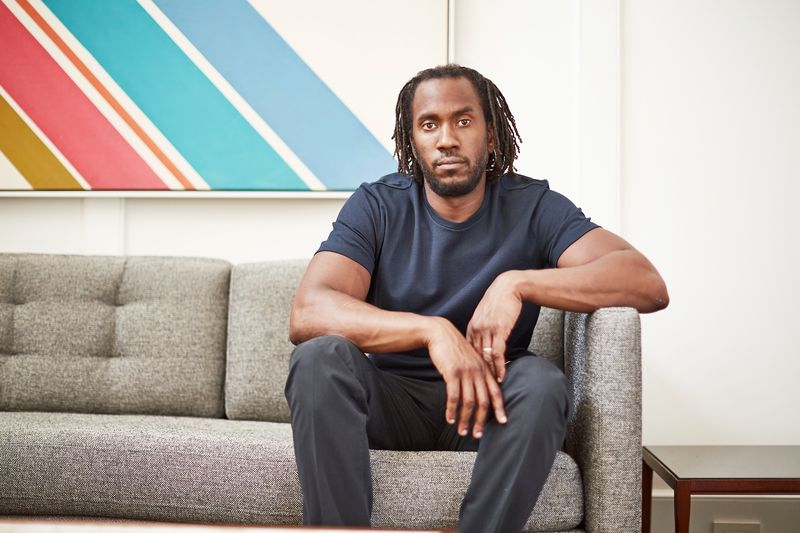 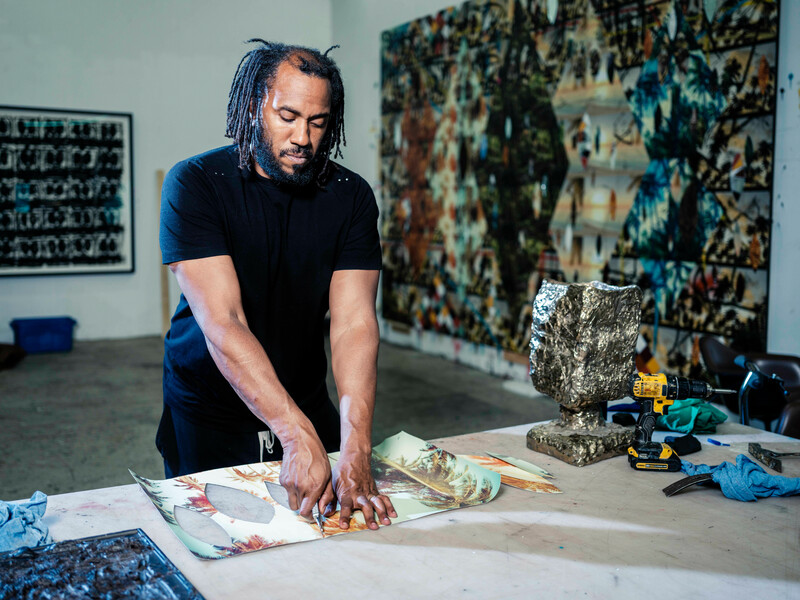 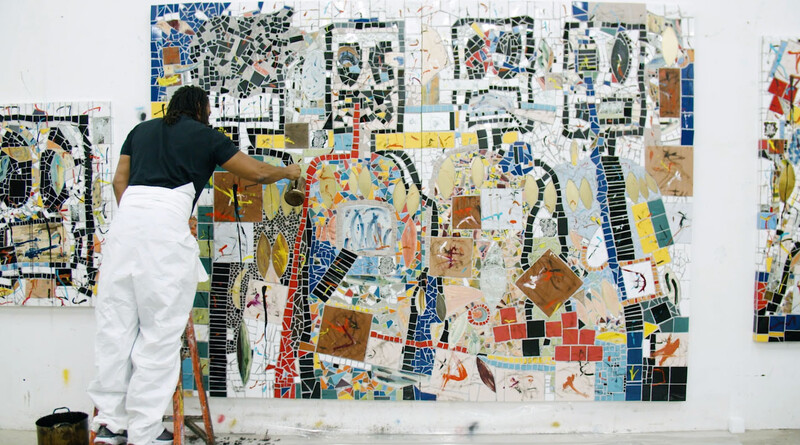