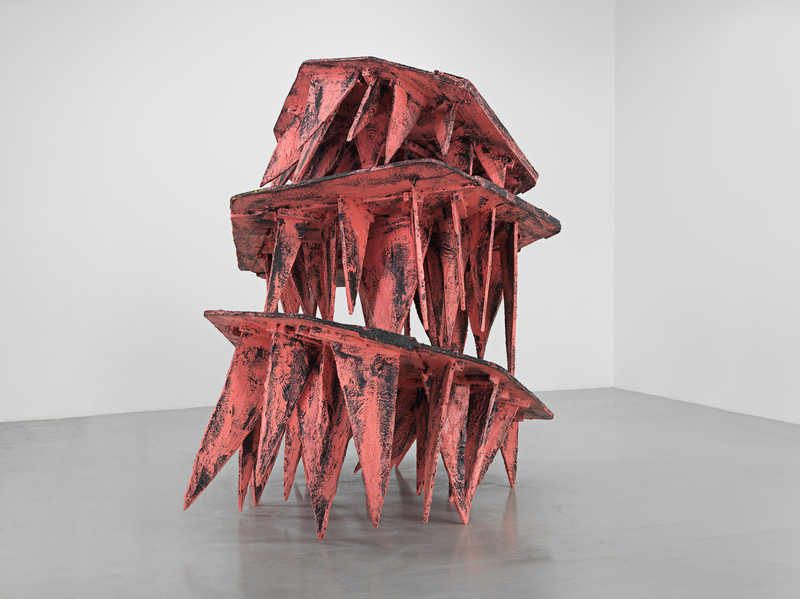 For more than fifty years, British artist Phyllida Barlow has created sculptures and large-scale installations using a direct and intuitive process of making. She transforms humble, readily available materials through layering, accumulation, and juxtaposition, often drawing inspiration from her urban surroundings to reference construction debris, architecture, signs, fences, and discarded objects. Following Barlow’s critically acclaimed presentation at the British Pavilion for the 2017 Venice Biennale, Hauser & Wirth is pleased to present ‘tilt,’ an exhibition featuring recent large-scale works installed for the first time alongside more than a dozen smaller sculptures. Together, the works on view encourage an intimate encounter between object and viewer, continuing a career-long exploration into the ways in which sculpture can dissolve boundaries between realms of experience.

Upon entering the gallery, visitors are confronted with Barlow’s towering ‘untitled: tilt(lintel); 2018.’ Roughly hewn from industrial materials including cement, scrim, plywood, and steel, the sculpture’s title alludes to support beams that span doorways or windows. Here, Barlow has stripped the architectural threshold down to an essence, its shape ambiguous and its purpose subverted. As visitors pass underneath ‘untitled: tilt(lintel); 2018,’ their movement is almost immediately blocked: where the shadow of the construction would appear, Barlow has made manifest its form. She relishes in the transformation of these objects and has said ‘The translation from something actually observed to the thing it becomes, I hope, gets more and more eroded and blurred until it can’t remember what it is meant to be.’

At once menacing and playful, imposing and delicate, additional large-scale works on view stretch the limits of mass, volume, and proportion, drawing visitors into equally intriguing physical encounters. Barlow’s enormous ‘untitled: hung4; 2018’ suspends from the gallery’s ceiling, while her ‘untitled: female (2); 2018’ stands more than ten feet tall, towering over the gallery space. Elsewhere, the restless, arched forms of ‘untitled: boundfence; 2018’ and the colossal ‘untitled: sign; 2018’ hint at objects that typically direct or impede our movement through the urban environment.

At the center of the gallery are new small-scale sculptures that provide a powerful counterpoint to the massive constructions that surround them. Here, Barlow continues her negotiations of space by propositioning the viewer with a more intimate interaction. Standing between five and seven feet in height, works including ‘untitled: dancer; 2018’ and ‘untitled: slope; 2018’ appear totemic yet vaguely anthropomorphic. Barlow’s plinth sculptures, such as ‘untitled: sleeve; 2018’ and ‘untitled: pointer; 2018,’ play on notions of classicism and perceived value, their roughly made forms offering a lesson in what it takes for everyday objects to become art. Color animates their surfaces, rendering a delicate friction that engages the eye as it climbs from base to top. Together with the other works on view in ‘tilt,’ these precarious-looking sculptures critique monumentality while emphasizing the transient, absurd, and often joyous encounter between an object and its surroundings.

In conjunction with ‘tilt,’ Barlow’s recent commission, ‘prop,’ for the High Line remains on view through March 2019. Drawing inspiration from a sculpture she presented outside the British Pavilion at the 2017 Venice Biennale, ‘prop’ consists of two large concrete panels, with holes cut from their centers, set on stilts. The towering sculpture appears like a character teetering among the planks at its base and emerging from the planting beds below. ‘prop’ is the first artwork ever presented on the Northern Spur Preserve at 16th Street, a location that allows for unique views both from the High Line and the avenue below. 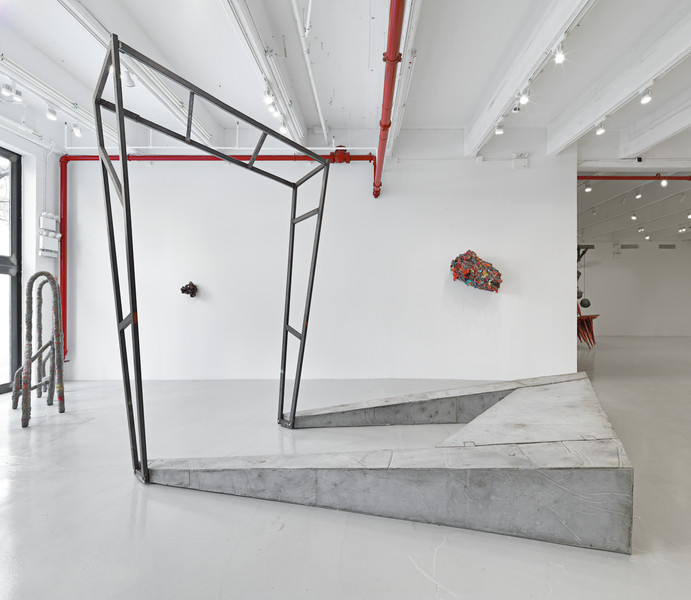 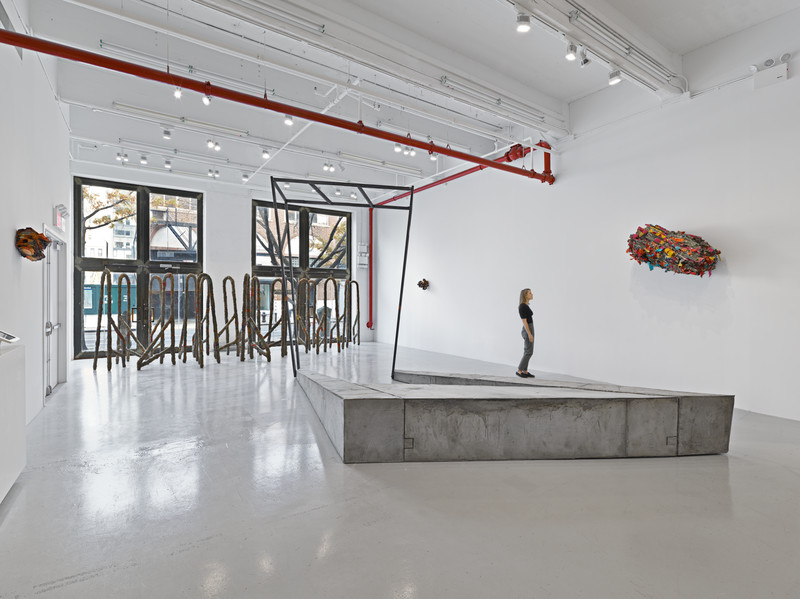 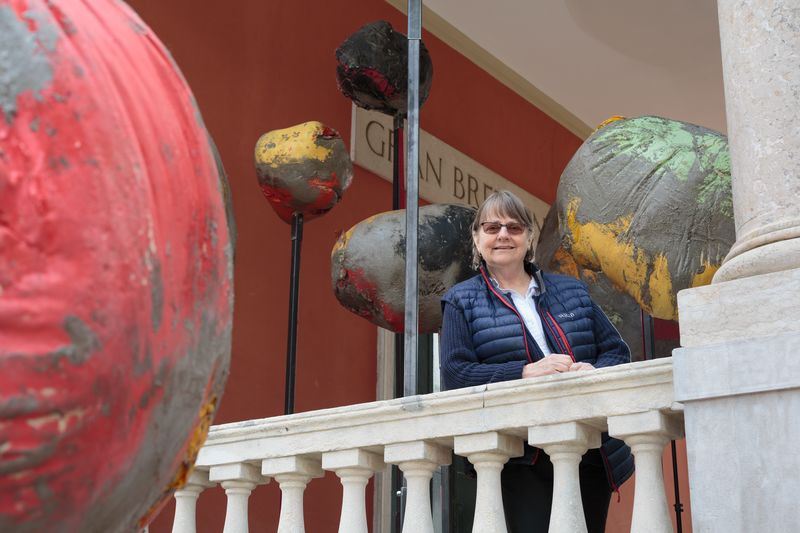 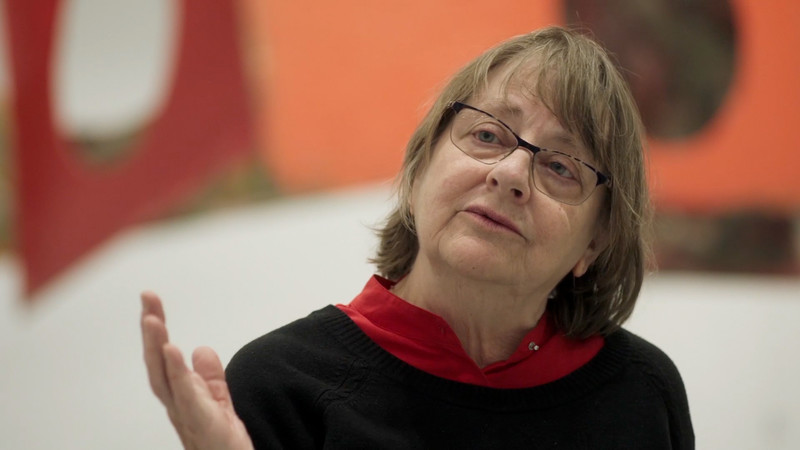 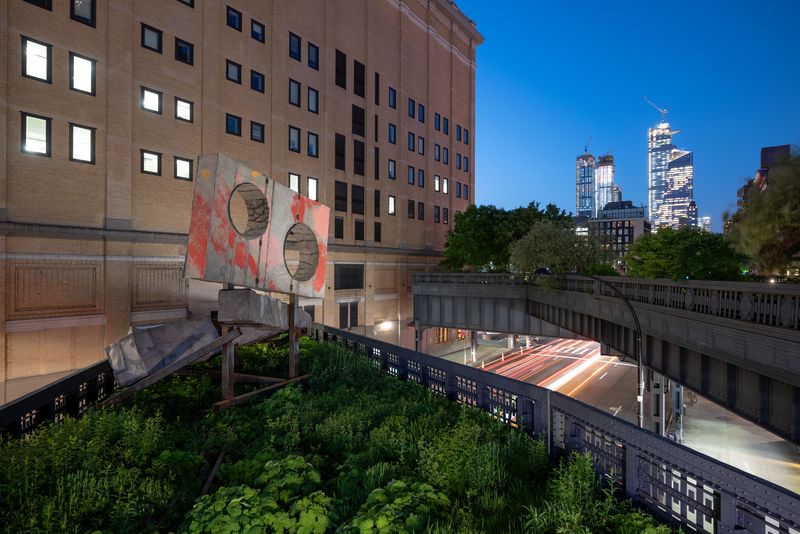