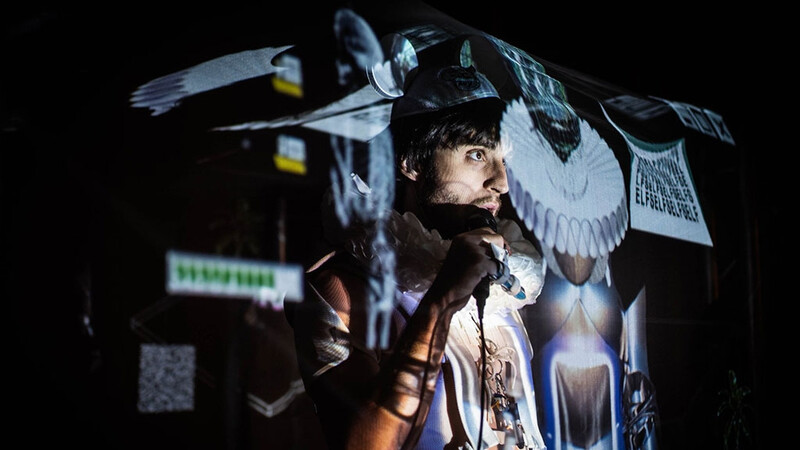 ‘HA-M-LET’ is a multilingual, multimedia performance housed within a projection cube. Themes of madness, deceit and familial conflict take digital form as artist and performer Peter Mark grapples with tumbling thoughts and images that reach a vivid state of saturation. With materials sourced from Shakespeare’s play, internet culture, home videos and 3D animation, the interwoven imagery morphs between landscape and body, narrative and biography—shifting at a rate that pays homage to Hamlet’s own velocity of thought. The artist’s Brazilian parents appear in the roles of King, Queen and Ghost, rendering a conflict both textual and real—simultaneously liberated and confined by layers of media.

‘HA-M-LET’ is performed in Portuguese and English.

Tickets to this event are $8. Click here to purchase tickets.

About CalArts Center For New Performance

CalArts Center for New Performance (CNP) is the professional producing arm of California Institute of the Arts, established to provide a unique artist- and project-driven framework for the development and realization of original theater, music, dance, media, and interdisciplinary projects. Extending the progressive work carried out at CalArts into a direct dialogue with professional communities at the local, national, and international levels, CNP offers an alternative model to support emerging directions in the performing arts. It also enables CalArts students to work shoulder-to-shoulder with celebrated artists and acquire a level of experience that goes beyond their curriculum.

Seminal artists from around the world are brought to CNP to develop work that expands the language, discourse, and boundaries of contemporary theater and performance. CNP fosters the future of live performance by infusing the work of such transformative artists with the talent, vitality and impulses of emerging artists in the CalArts community.

Since its modest beginning, CalArts Center for New Performance has produced work that has had immediate and startling effect on the national and international performance environment. CNP represents an integral part of the Institute’s commitment to provide a home for alternative theater and cross-disciplinary work on CalArts’ Valencia campus, at REDCAT, and at other national and international venues.

CalArts Center for New Performance was founded in 2002 by Susan Solt, Travis Preston, and Carol Bixler and launched with Travis Preston’s groundbreaking all female production of King Lear – staged in six locations within the massive factory spaces of the Brewery Arts Complex in downtown Los Angeles. Originally called the called the CalArts Center for New Theater, the name was changed in 2005 to reflect the expanded mission, aspiration and embrace of the larger CalArts performance landscape.

Peter Mark (b. 1991, USA) is a Brazilian American performer based in Los Angeles who develops multimedia, multilingual, site-responsive performances. His current body of work uses 3D renderings, gif-collages and object landscapes to respond to seminal theatrical texts in the Western canon, sculpting live performances within layers of projected media. He holds an MFA in acting from CalArts School of Theater, and his media works have been featured on Channel 4, MuseumTV France and Vimeo Staff Pics.